Today’s subject in Mythological Figures pushed the borders of the Aztec Empire to their furthest reaches before its precipitous fall: Moctezuma II! 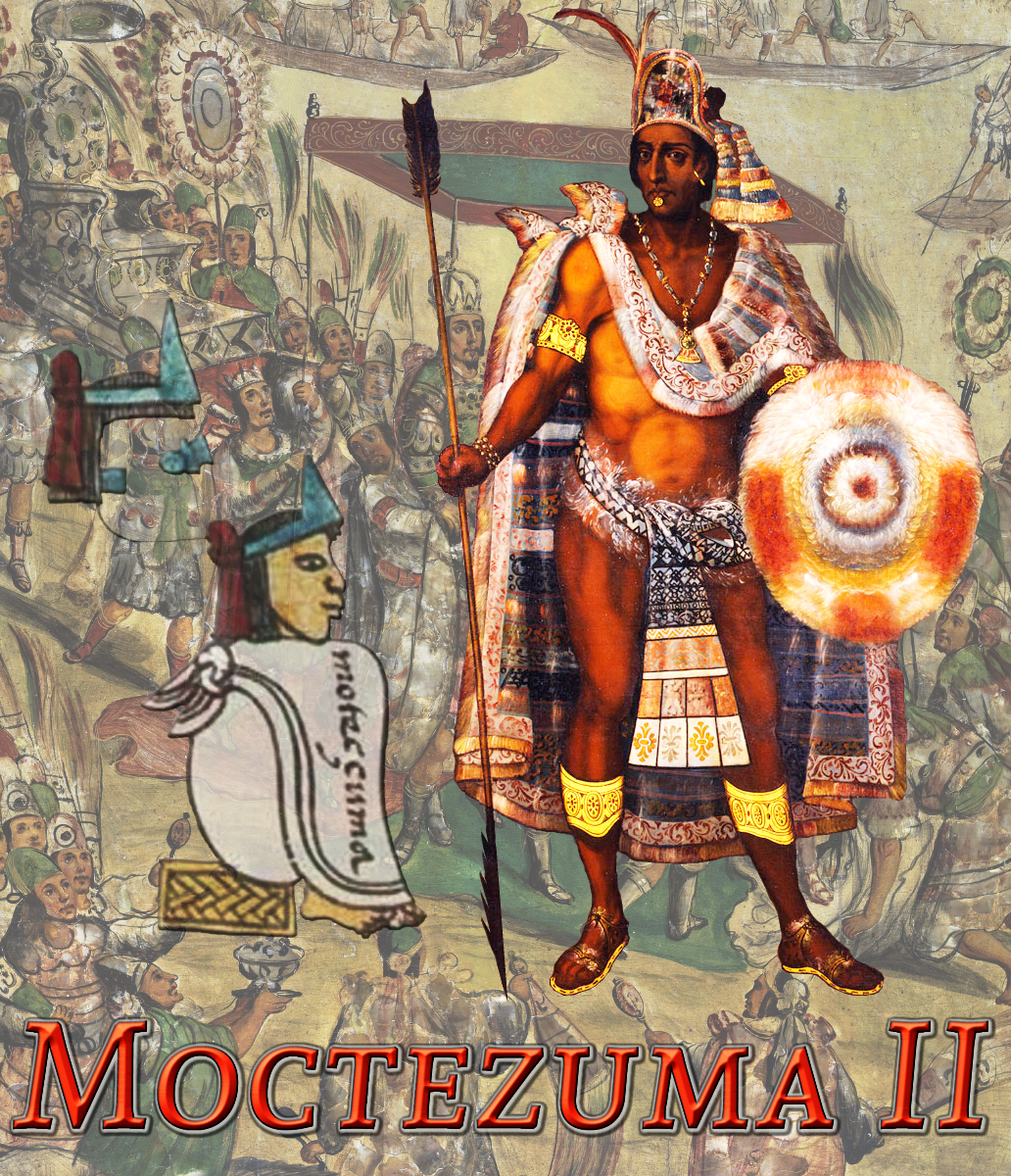 Born in 1466 and taking the reins of power at the age of 36, Moctezuma II ruled the Aztecs for 18 years during which the first Europeans—led by the infamous conquistador Hernán Cortés—made landfall in Mesoamerica. Both before and during those initial years of contact this respected king engaged in battle at first among his warriors and then as the commander of all the empire’s soldiers, expanding the borders to include what is today Honduras and Nicaragua. There was great confusion with the Spaniards however (including a ridiculous story about Moctezuma interpreting Cortés as the revered deity Quetzalcoatl returned that I’m 99% sure is entirely made up), and after many unarmed Aztec nobles were slaughtered in the unprovoked Massacre in the Great Temple of Tenochtitlan things came to a head. Graciously hosting the Spaniards in his palace, in the aftermath of the massacre he was taken hostage and ultimately died before he could escape or be released. The details of his demise are uncertain; Spanish accounts claim he was struck by stones thrown by his own subjects when peaceful talks with his generals broke down following the rise of his uncle Cuitláhuac to replace him as the new tlatoani and then he refused treatment, while indigenous people portray his death to be directly in the hands of the invaders. Regardless of how that came to pass, Moctezuma's corpse was delivered to the Aztecs and cremated afterward.

Design Notes: What follows is a build for the last great Aztec tlatoani in his prime—a warrior among warriors, able to hold his own and enhance those under his command. The warlord archetype was considered but as a banneret fighter he is in an awesome place to do that without having to keep squads of carefully formed platoons, and alongside the Inspiring Words feat Moctezuma has the marks of a true leader able to rally others in battle. Let’s do the numbers! The DMG came in at 6.75 and the Blog of Holding 7.2. Given his capacity for amplifying his allies in combat while delivering a beatdown himself, he’s getting a little bit of a nudge to end with a final Challenge Rating of 7.

Background: Noble. Due to his position as a ruler, Moctezuma is treated with a measure of respect wherever he goes. He is treated as royalty (or as closely as possible) by most peasants and traders, and as an equal when meeting other authority figures (who make time in their schedule to see him if requested to do so).

Feat: Leader’s Words. When Moctezuma spends 10 minutes speaking inspirationally, he can choose up to 6 friendly creatures (including himself if he likes) within 30 feet that can hear and understand him. Each creature gains 14 temporary hit points but cannot gain more temporary hit points from this feature until after they have completed a long rest.

Feat: Master of the Spear. Moctezuma can increase his reach with a spear by 5 feet until the end of his turn by using a bonus action. In addition, he can prepare his spear to resist a charge by using a bonus action. Moctezuma chooses a creature within 20 feet that he can see and if on his next turn it moves within his reach, he can use his reaction to make a melee attack against it using his spear. On a hit he deals an extra damage die. A creature that used Disengage does not provoke an attack from Moctezuma.

Indomitable (1/Long Rest). Moctezuma can reroll a saving throw that he fails but must use the new roll.

Inspiring Action Surge (1/Short Rest). Once on his turn, Moctezuma can take an additional action on top of his regular action and a possible bonus action. In addition, he chooses one allied creature within 60 feet that can see or hear him. The chosen creature can use its reaction to make a melee or ranged weapon attack.

Second Wind Rally (1/Short Rest). On his turn, Moctezuma can use a bonus action to regain 1d10+12 hit points. In addition, he chooses 3 creatures within 60 feet that can see or hear him. Each target regains 12 hit points.

Mike Myler is a freelancing RPG goblin (or goblin that freelances for RPGs?), the editor for the excellent EN5ider Patreon, and the Project Manager for Level Up: Advanced Fifth Edition. You can also find his marks in the N.O.W. book for the What's Old Is New RPG and on www.mikemyler.com⁠ (which has the neatest collection of free content around as well as links to his 6 hardcover campaign settings).
J

I've been listening to an incredible retelling of his story: part 1 and part 2

For a second there I was like "Aztecs didn't even have cars."

Publisher
I love this one. Great job.

Why a spear instead of a macahuitl (longsword)?

J-H said:
Why a spear instead of a macahuitl (longsword)?
Click to expand...

The portrait has him with a spear so I went with that.

Hmm... with feathers on the back, that could be a stylized atl-atl javelin/arrow. I don't think they are that long, though.

Mike Myler said:
The portrait has him with a spear so I went with that.
Click to expand...

But Macahuitl were the weapon of choice.

Also a couple of details. Nahuatl is an exonym. Most speakers of the language call it mexicano/mexicana.

As for the whole deal with Cortés and Quetzalcoatl. This is the result of oversimplification and details getting lost in the retelling. He wasn't thinking Cortés was a god in the flesh -religion in the Anahuac didn't conceive gods in the GrecoLatin sense where they had a body and directly meddled in mortal affairs -, but he related him to the legendary emperor of the Toltec Empire Ce Acatl Topiltzin, also known for his tonal (mystic) name of Quetzalcoatl. -in prehispanic times, each person had three names, a calendaric name, given by the day of birth or ceremonial naming, a given name chosen by the parents, and a tonal name given by the priests after consulting the sacred books. This name usually remained a secret. This guy however was very important and was very public with his ritual name. After all it is Quetzalcoatl-

This emperor is a semi-historical figure known for having founded Tula (The second great city after Teotihuacan) and he later migrated to the East with a group of Toltecs (this migration did happen, post-classic Mayans are more accurately named Maya-Toltecans because they show a great degree of syncretism of Maya tradition with cultural elements that were first seen in the Toltecs, who were the descendants of the early Chichimec migrants that intermarried with the native descendants of the inhabitants of Teotihuacan. This group was later displaced by the later Nahua migrations, of which Aztecs were the last to arrive. )

The Aztecs held the Toltecs in very high regard -just like how many medieval kings still held the Romans in a pedestal-, and then were faced with a group of people who carried very advanced and finely crafted items, who happened to come from the rough direction the last Toltecs migrated to, and might as well be descendants of the Toltecs with a claim on the land. In short, this was likely less religious superstition than the pragmatic fear of the descendants of the previous rulers and occupants of the land showing at his doorstep with a claim on the lands his empire currently occupied.