News Digest for the Week of May 28

Hello everyone, Darryl here with this week’s gaming news! New Drizzt novel details hint at a change for Forgotten Realms Drow, PaizoCon Online Europe details revealed, Solatsa: Crown of the Magister out of Early Access, Monopoly: Dungeons & Dragons released, it's the Summer of Starhaven for Mutants & Masterminds, and more!

Don’t forget, you can get all the news every week with Morrus’ Unofficial Tabletop RPG Talk! This week, Morrus and Peter are joined by Steve Wieck to talk about the history and business of DriveThruRPG.

#151:The History and Business of DriveThruRPG with Steve Wieck

This week, Morrus and Peter are joined by Steve Wieck to talk about the history and business of DriveThruRPG. In the news, Benedict Cumberbatch voices a Drizzt lullaby, Morrus thinks he’s figured out the D&D television series, Dungeons & Dragons grows for the seventh straight year, and more... 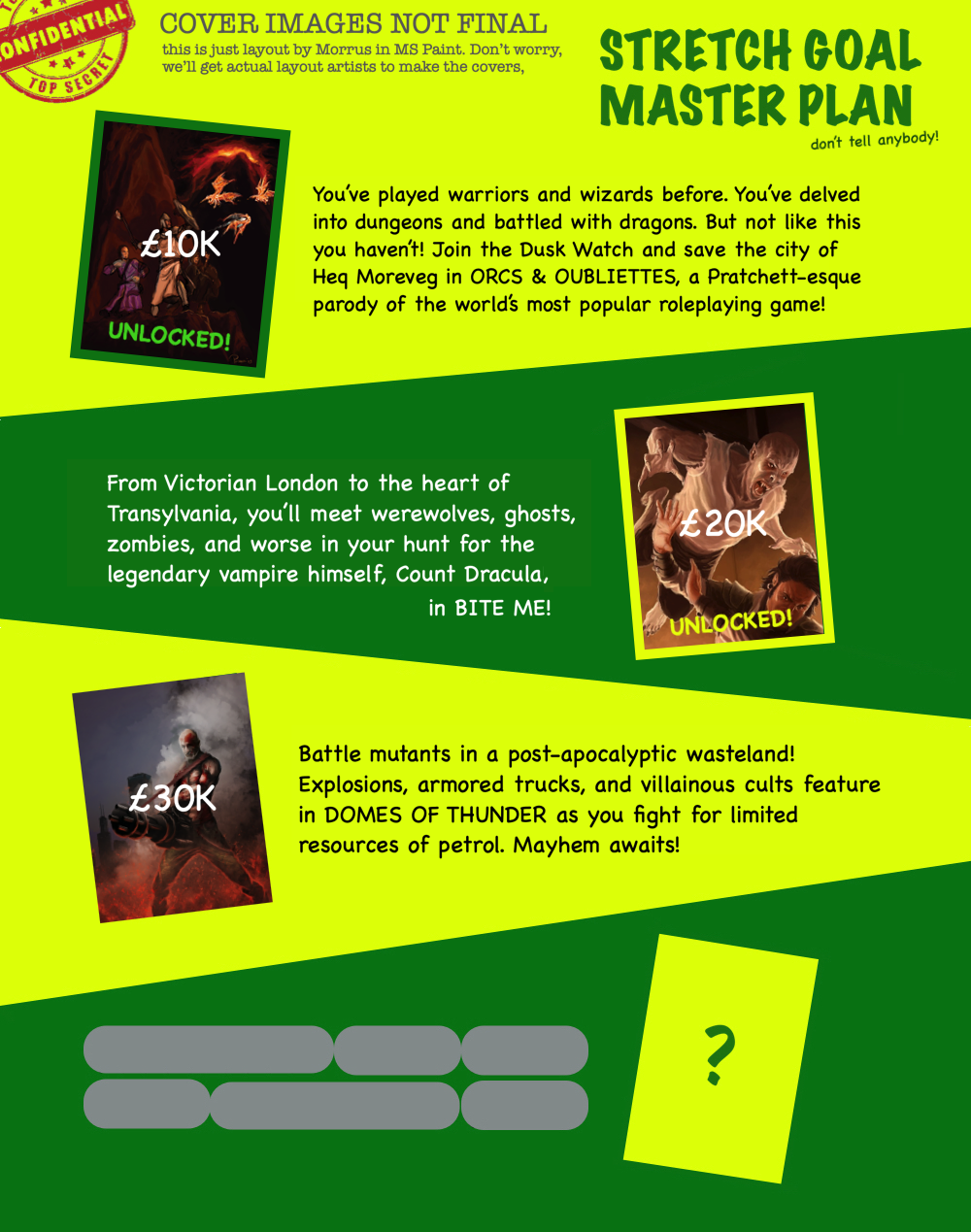 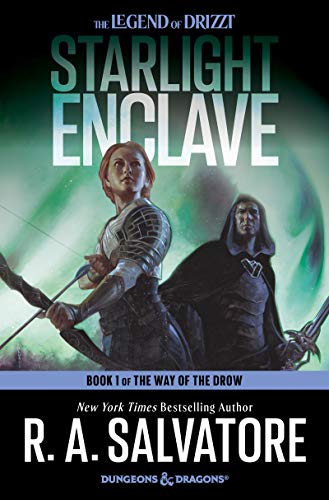 I’m sure you’re already aware that this is the Summer of Drizzt following the announcements last week. Of course, the reason for this is to promote the new novel from R. A. Salvatore featuring Drizzt, Zaknafein, and Jarlaxle titled Starlight Enclave and is the first of the Way of the Drow series. The synopsis of the novel seems rather typical of the long-running Legend of Drizzt series, but there may be more to it. Here’s the blurb from Amazon:

After the settling dust of the demon uprising and two years of peace, rumblings from the Menzoberranzan drow have Jarlaxle nervous. Worried his allies may be pulled into a Civil War between the great Houses, he is eager to ensure Zaknafein is armed with weapons befitting his skill, including one in particular: Khazid’hea. A powerful artifact, the sword known as “Cutter” has started wars, corrupted its users, and spilled the blood of many, many people. Nonetheless—or maybe because of that—the rogue Jarlaxle and a small group of friends will go on an expedition looking for the weapon’s last wielder, Doum’wielle, in the freezing north, for she may be the key to unlocking the sword’s potential…and perhaps the key to preventing the bloodshed looming over the Underdark.

And as they explore the top of the world, Drizzt is on a journey of his own—both spiritual and physical. He wants to introduce his daughter Brie to Grandmaster Kane and the practices that have been so central to his beliefs. But, having only recently come back from true transcendence, the drow ranger is no longer sure what his beliefs mean anymore. He is on a path to determining the future, not just for his family, but perhaps the entire northlands of the Realms themselves.

And no matter the outcome of either journey, the Realms will never be the same again.
Click to expand...


This combined with the announcement post on the Wizards of the Coast website may be hinting at a possible minor retcon (or at least refocusing of existing lore). For most of the Forgotten Realms publication history, the focus has been on Menzoberranzan and the Drow servants of the Spider Queen Lolth. However, if you scroll down to the section on the Underdark city, you’ll find highlighting two other Drow cities and cultures: The secretive icy city of Callidae populated by Aevendrow (aka Starlight Elves) who rejected Lolth and the jungle enclave Saekolath with the earth-focused Lorendrow (Greenshadow Elves). It seems as though WotC may look to bring these two more obscure and secretive Drow cultures into the forefront as a contrast to the seeming monoculture of evil Drow that previously dominated Forgotten Realms.

We’ll likely find out more about the D&D team’s plans for the Drow in Forgotten Realms as the summer progresses in the lead-up to the new Drizzt novel on August 3 along with the June 21 release of the Dark Alliance video game featuring Drizzt and his companions on Playstation, Xbox, and PC.

Speaking of video games, Solasta: Crown of the Magister has officially left Early Access. After running a successful Kickstarter campaign in October 2019 and entering Early Access in October 202, the full game based on the 5e ruleset is now available. The campaign takes players from Level 1 to 10 using the same basic rules as 5e under the SRD 5.1 in a turn-based roleplaying game with an emphasis on 3D terrain and exploration (so always make sure to look up). Leaving Early Access means the game is not just available on Steam now, but multiple other storefronts for PC games including GOG, Humble, Gamesplanet, and the Windows Store. Additionally, subscribers to Microsoft’s Xbox Game Pass for PC can install and play the game right now as part of their subscription at no additional cost. And in celebration of the launch, the game is currently available for 20% off on almost all of these storefronts (sorry to those who prever Windows Store but aren't Game Pass for PC subscribers).

Not to be outdone with “summer of” themed events, Green Ronin announced the Summer of Starhaven event for the Mutants & Masterminds roleplaying game. The alien refuge city of Starhaven was originally published in the 2015 Cosmic Handbook but has received very little fleshing out, at least until Alex Thomas ran a live stream game in the setting with other members of the Green Ronin staff. The event will not only flesh out the city setting, but also give Mutants & Masterminds Patreon supporters the ability to influence its direction. Supporters will vote on the city government, which regions will be explored in detail, and help design a villain for the city. More information will come over the summer months of June, July, and August via the Mutants & Masterminds Mondays live stream event on Facebook. 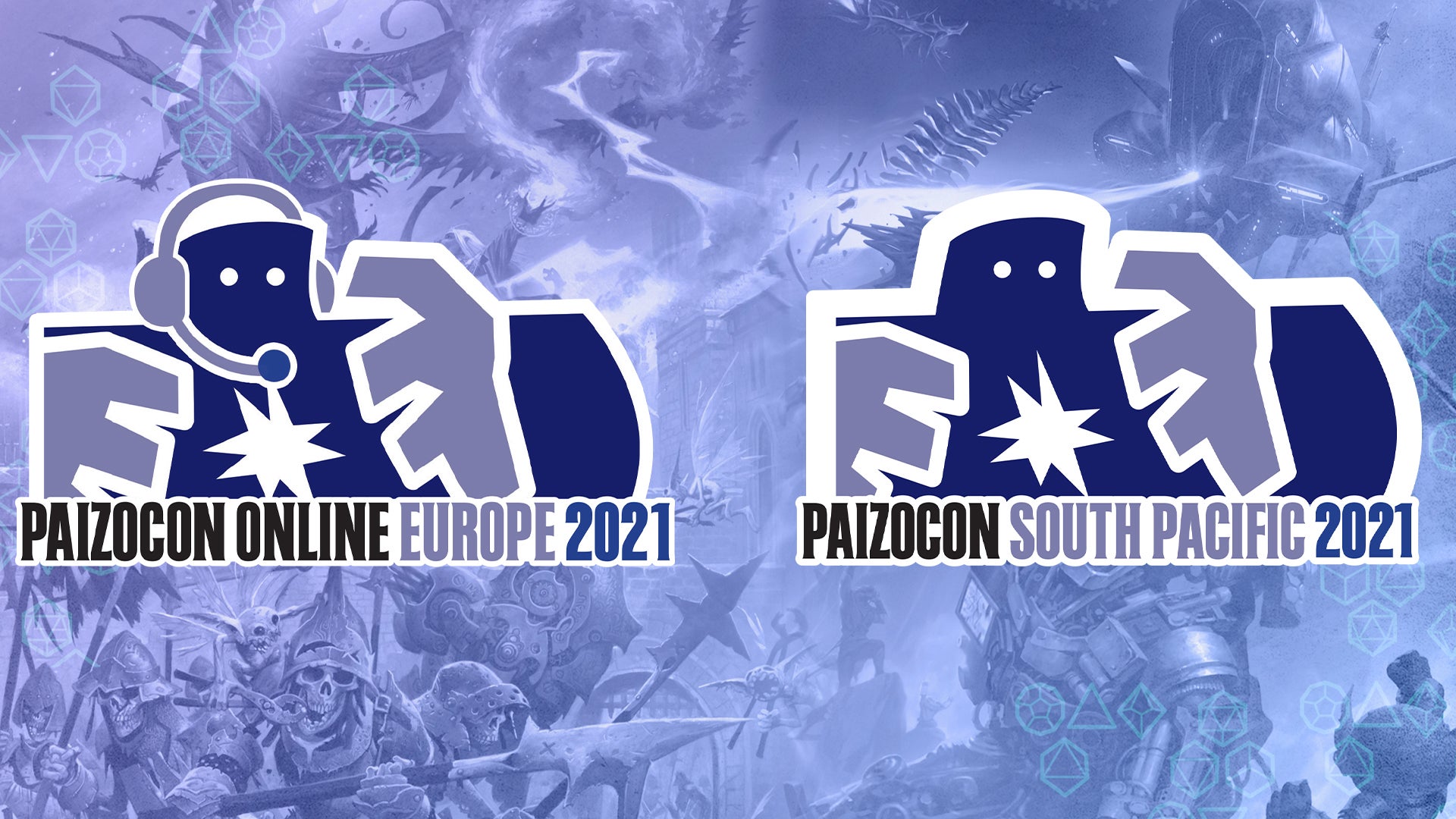 Paizo announced a new online convention specifically for fans not in the Western Hemisphere, PaizoCon Online Europe 2021. The online convention will run from August 19-22, 2021, and feature games and live streams scheduled in four blocks: Morning (8:00 AM British Summer Time), Afternoon (2:00 PM BST), Evening (8:00 PM BST), and Overnight (2:00 AM BST). There is a €10 fee per badge (dropping to €5 for volunteer GMs who run 1-2 games or free for those who run three or more) which will be donated to three charities: Alzheimer’s Research UK, Fonds Mimosa (which benefits low-income children in Switzerland), and Deutsche Krebshilfe (German Cancer Aid). A limited number of sponsored badges will also be available for request for those who cannot afford the fee, and attendees are encouraged to donate a sponsored badge for an additional €10. For more information about events and volunteering to GM games, check the blog post on the Paizo website. 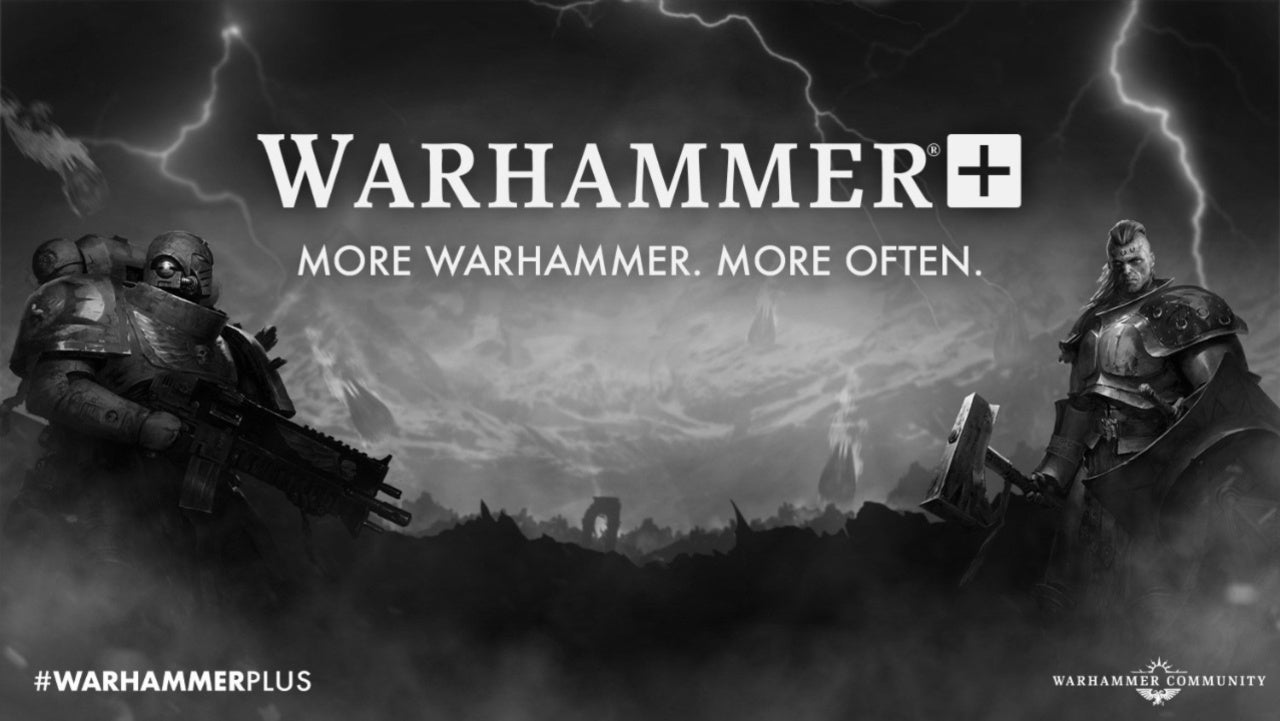 Games Workshop announced a new subscription streaming service called Warhammer Plus. Yes, a video streaming service. For Warhammer and Warhammer 40K. The service will launch with eleven animated series: Black Talon, Iron Within, Altar of Wrath, High Lords, Broken Lance, Hammer and Bolter, Astartes II, Interrogator, The Exodite, Pariah Nexus, and the ten-part series announced previously focusing on the Blood Angels, Angels of Death. The service will also feature several “subscriber benefits” with the hint that they will be relevant to the tabletop wargames, though that has not been confirmed nor have any of the subscriber benefits been announced. The app will be available on iOS, Android, and smart TV devices this July, though prices have not yet been announced. 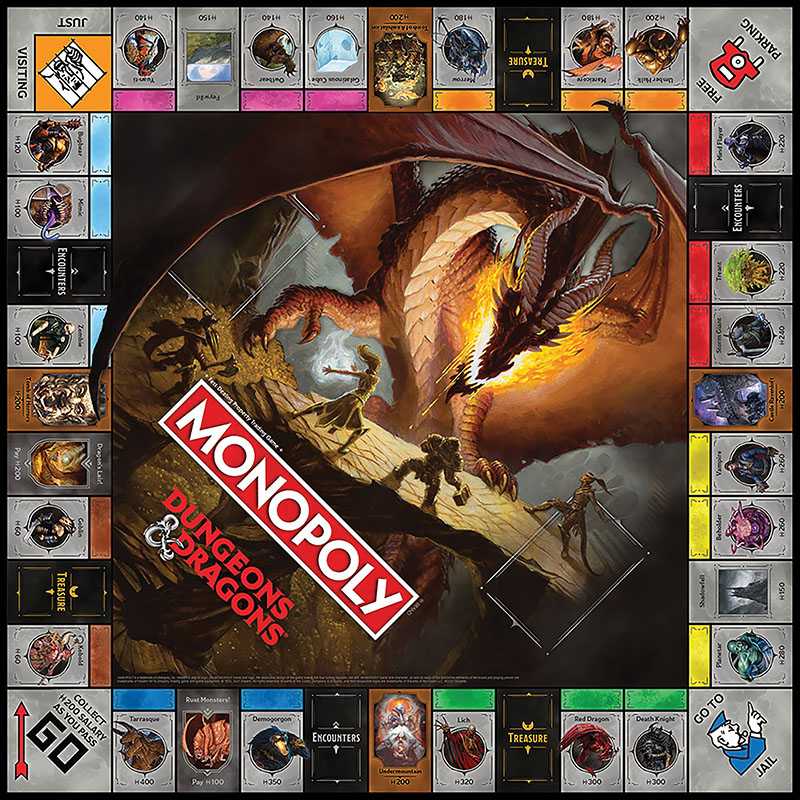 So, Monopoly: Dungeons & Dragons was going to have to be a thing eventually, wasn’t it? Rather than simply reskinning the game, it would be more accurate to call this a complete retheming similar to the Clue: Dungeons & Dragons released a few years back. Instead of battling other entrepreneurs over Atlantic City properties, players take on monster hunters working for Volothamp Geddarm (of “Volo’s Guide” fame) to capture monsters for scholarly research. The properties are replaced by 22 different monsters from the Dungeons & Dragons worlds, the tokens replaced by (not to standard scale, unfortunately) miniatures of D&D hero classes, the Community Chest and Chance cards replaced with Treasure and Encounters, Houses and Hotels are now Expeditions and Bases, and the Railroads have been replaced by iconic D&D locations such as the Tomb of Horror and Castle Ravenloft. The game is available for $39.99 directly from The OP (previously known as USAopoly so they know their rethemed Monopoly games) now and in retail stores shortly. 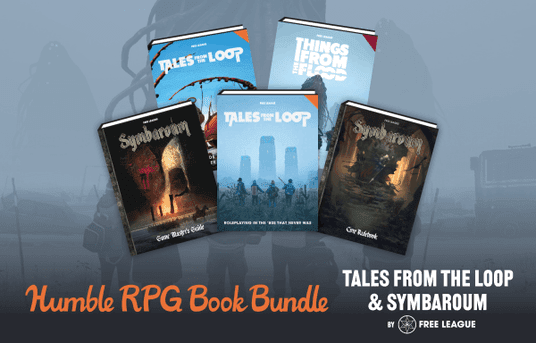 Free League and Humble have partnered for the Tales from the Loop and Symbaroum Bundle. The bundle features over $200 worth of digital books including the core rules for the kid adventure Tales from the Loop, the teenage sequel Things from the Flood, and the dark fantasy exploration Symbaroum roleplaying games along with sourcebooks, adventures, and more. This bundle runs until Monday, June 14, and benefits a charity of your choice. Meanwhile, the Pathfinder 2nd Edition bundle is still available featuring over $400 worth of books for Pathfinder 2nd Edition including the Core Rulebook, Gamemastery Guide, Bestiary, the Extinction Curse adventure path, maps, adventures, fiction, and more. This bundle benefits. This bundle benefits Stop AAPI Hate and runs until Thursday, June 10.


That’s all from me for this week! Don’t forget to support our Patreon to bring you more gaming news content. If you have any news to submit, email us at news@enpublishingrpg.com, and you can get more discussion of the week’s news on Morrus’ Unofficial Tabletop RPG Talk every week. You can follow me on Twitch to get notifications when I go live, subscribe to Gamer’s Tavern on YouTube for videos on gaming history, RPG reviews, and gaming Let’s Plays, or you can listen to the archives of the Gamer’s Tavern podcast. Until next time, may all your hits be crits! Note: Links to Amazon, Humble Store, Humble Bundle, and/or DriveThru may contain affiliate links with the proceeds going to the author of this column.
Last edited by a moderator: May 28, 2021
Click to expand...

After the D&D Monopoly, what will be next, "Hero Quest" expansion packs based in famous franchises (Zelda, League of Legends, Game of Thrones, Harry Potter, Conan the barbarian..).

Salvatore is the best. His genius alone made the drow beloved of the fantasy races, hence, the pure evil nature was one Player's looked to down play when drow characters became popular in 4th Ed.