Hello everyone, Darryl here with this week’s gaming news! New setting coming from Tracy & Laura Hickman, preview for The Wild Beyond the Witchlight, new D&D accessories from Gale Force 9, Free RPG Day is on its way, and more!

Don’t forget, you can get all the news every week with Morrus’ Unofficial Tabletop RPG Talk! This week, Morrus and Peter are joined by Rich Lescouflair from Alligator Alley Entertainment to talk about Esper Genesis. 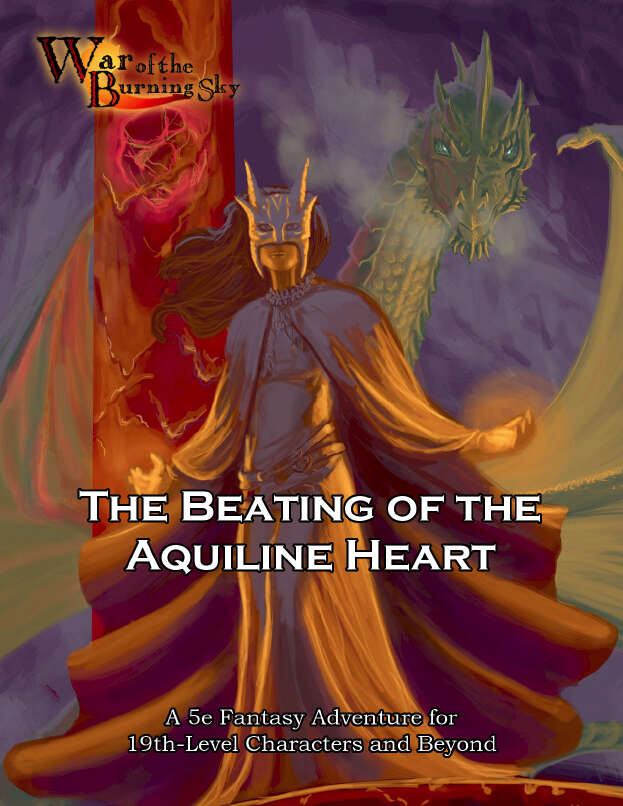 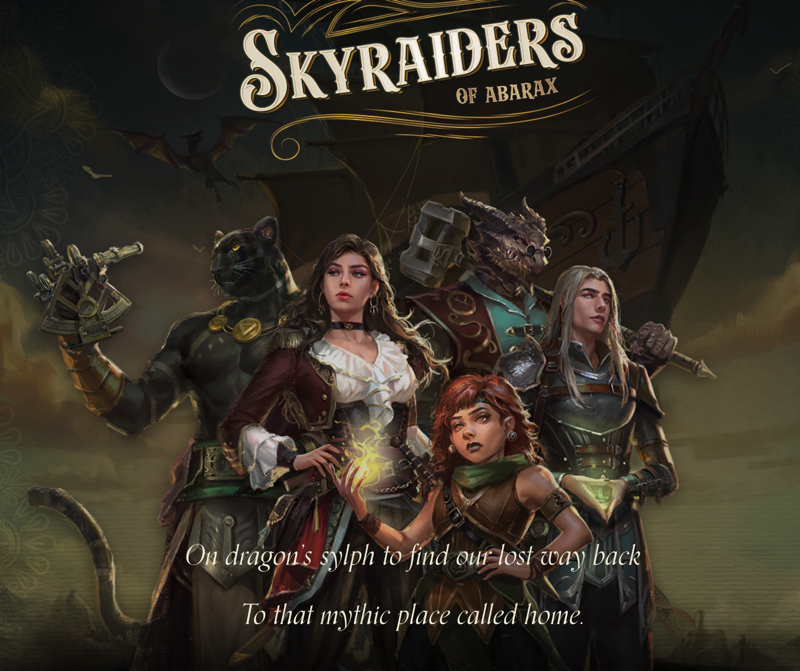 Tracy & Laura Hickman announced a new setting for 5e via Facebook, Skyraiders of Abrax. The setting so far only has teasers with several images posted across social media outlets with taglines including “To the winds, buccaneers, to the storm! Skyraiders fly! On dragon’s sylph to find our lost way back To that mythic place called home.”, “Long centuries past the aeroships imperial enforcers of our exile silently vanished from the skies”, “Yet our hearts are still fixed upon that empty horizon beyond a treacherous sea yearning for lands of which we’ve only dreamed”, and “Forsaken on the prison isle our ancestors broke from their chains and keepers to forge survival from their ruined past”. This along with the art style seems to indicate a swashbuckling Victorian-inspired fantasy setting that may include some steampunk elements. The only other clue is the announcement, which ends with “Join us in the creation of Sky-High Fantasy discovered through the magical books brought to life with our unique ‘Living Tome System’.” There is also no indication what the “Living Tome System” is, but many games have approached storytelling through sourcebooks with an advancing timeline over the years, including Shadowrun, World of Darkness, and BattleTech. The new setting will be coming to Kickstarter this fall. 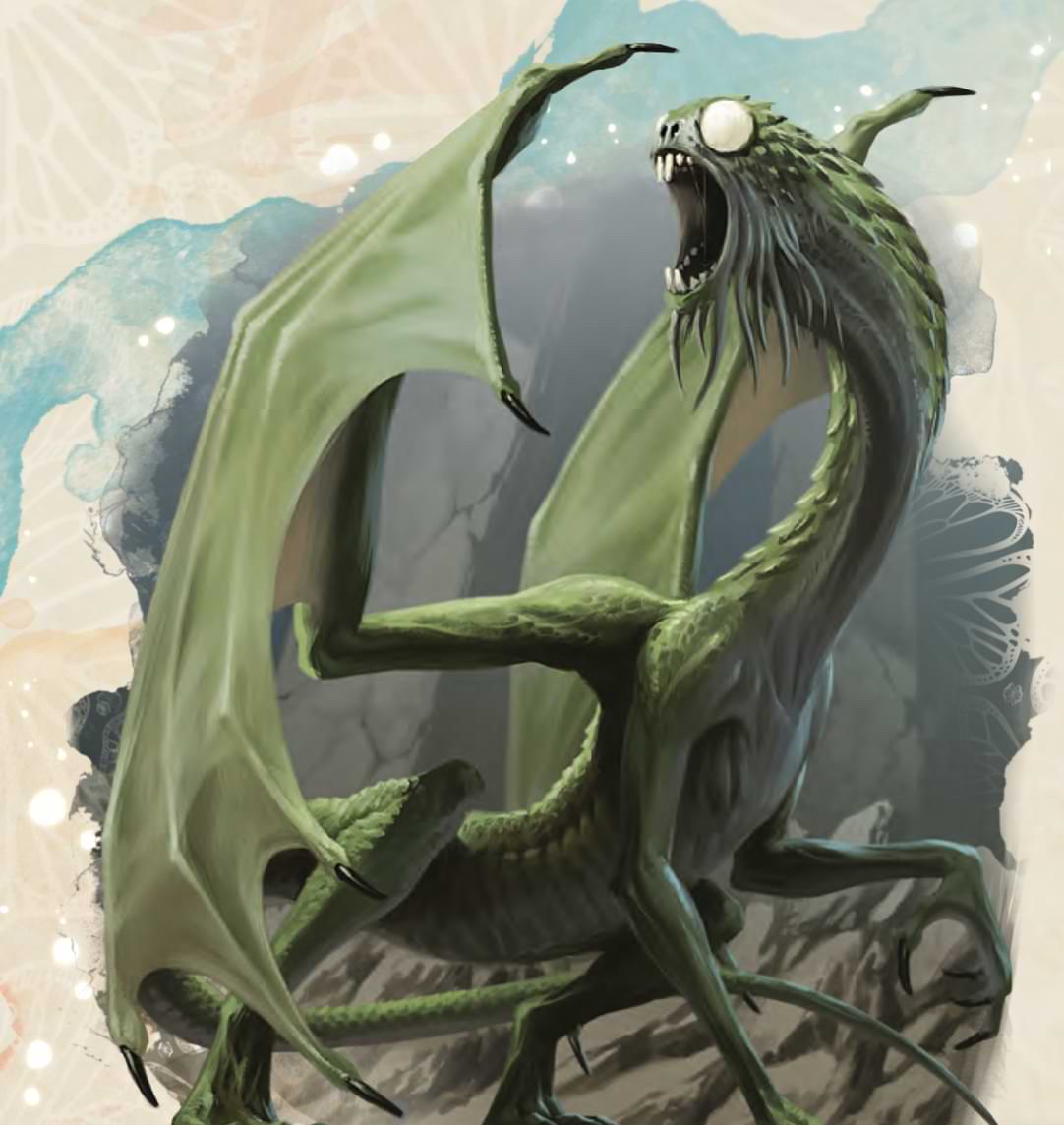 D&D Beyond released a preview of the Jabberwock from The Witch Beyond the Wildlight. The CR13 monster includes artwork and a complete statblock with abilities including “Confusing Burble” that forces a Charisma save for all creatures that can hear within a thirty-foot radius with a chance to cause confusion on a failed save and a recharging “Fiery Gaze” that is a 120-foot line attack. While the monster does have a regeneration ability, it is, of course, vulnerable to a vorpal sword. The adventure The Witch Beyond the Wildlight releases in hardcover for $49.95 on September 21, 2021.

Gale Force Nine announced several accessories for the upcoming Dungeons & Dragons setting and adventure The Wild Beyond the Witchlight. Five Collector’s Set unassembled and unpainted miniatures are on the way. One set will include the duo of Zybilna and Iggwilv, the rulers of Prismeer. The Hourglass Coven will have three miniatures of a trio of fortune-telling hags, Skabatha Nighshade, Bavlorna Blightstraw, and Endelyn Moongrave. The Harengon Brigands includes a trio rabbit-folk miniatures, an unnamed brigand with a halberd, one with a spear, and the hammer-wielding Agdon Longscarf who does indeed have a very long scarf. Two five-piece miniature sets will also come out, Valor’s Call featuring the heroes Strongheart, Mercion, Elkhorn, Molliver, and Ringlerun and their nemesis League of Malevolence with Zargash, Karak, Skylla, Kelek, and Warduke. Before anyone asks, I’m not sure what a There will also be a new DM Screen with art shown above, plus a series of encounter maps featuring a map of Prismeer itself, one of the Carnival, and one each for the lands of Hither, Thither, and Yon. No prices have been announced yet, but these products are all scheduled for a 4th Quarter 2021 release.

Free RPG Day announced the line-up of companies and games that will be available from your local game stores for the event. A brief overview: Paizo will have two adventures, The Starfinder Four vs. The Hardlight Harlequin for Starfinder and Threshold of Knowledge for Pathfinder 2nd Edition. Cubicle 7 will provide two adventures Reap and Sow for Warhammer: Age of Sigmar: Soulbound and Going Underground for Victoriana. Goodman Games will have two supplements, Tomb of the Savage Kings for Dungeon Crawl Classics and Dark Tower: The Sunken Tower of Set adventure for 5e. There are three adventures from Modiphius coming for Dune, Star Trek Adventures, and Achtung! Cthulhu, though only the Dune adventure, “Wormsign”, has been named. Green Ronin will provide QuickStart rules for the Blue Rose roleplaying game. There will also be a selection of accessories from Q Workshop with the “Steampunk Clockwork” six-sided die, WizKids has the fairytale-inspired Grim Cottage miniature, and more. Other offerings are coming from Edge Studio, Renegade Game Studio, Mantic, Hit Point Press, Magpie Games, and several other companies including some yet-to-be-announced surprises. Free RPG Day 2021 will take place on October 16 at participating game stores. 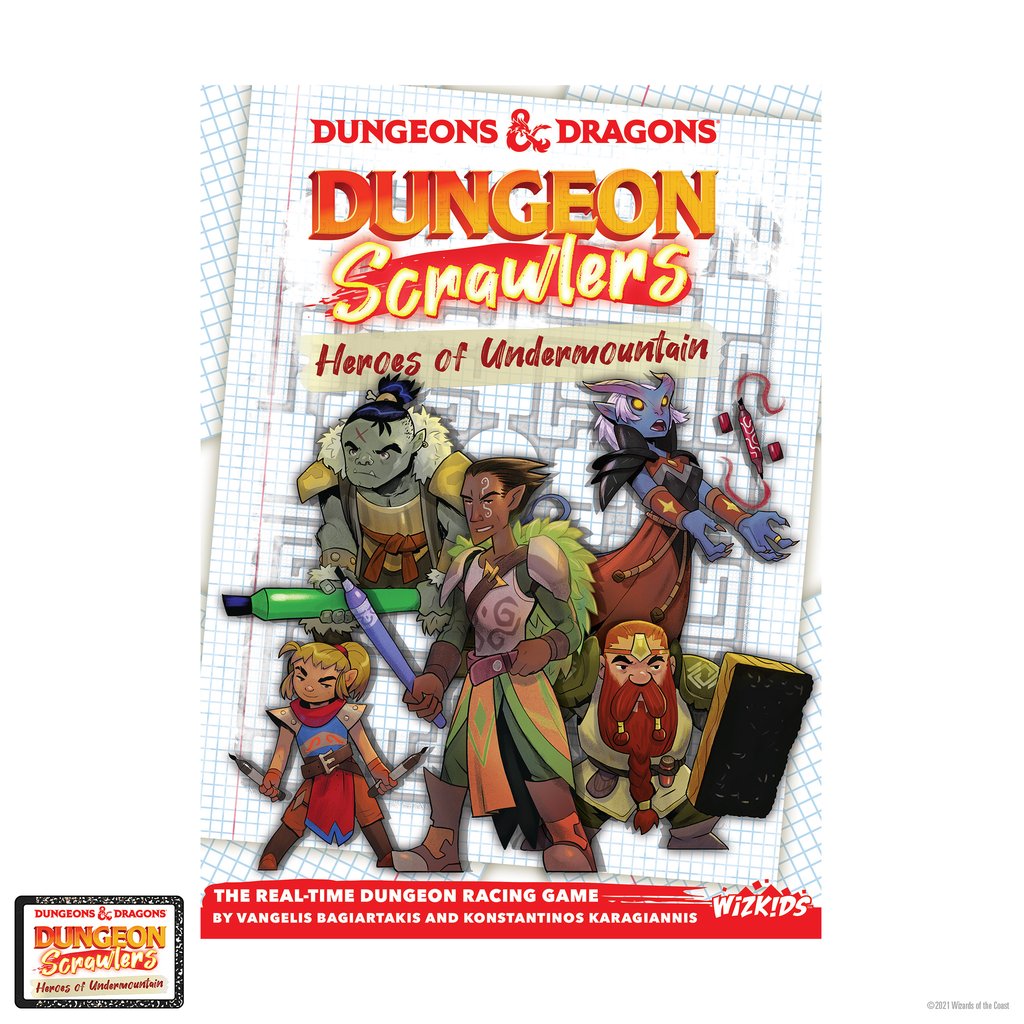 WizKids announced a new licensed Dungeons & Dragons product, the board game Dungeon Scrawlers: Heroes of Undermountain. The board game fo r2-4 players age 10 and up places you in the roles of adventurers attempting to conquer Undermountain, the dungeon of the Mad Mage Halaster Blackcloak. Players will complete a series of three mazes by drawing paths through them and defeating the challenges like enemies, traps, and locked doors. There are also five unique character classes that have special abilities, like rogues only need to “touch” treasure to pick it up, barbarians only need to fill in part of a monster’s box to defeat, and while anyone can cast spells by drawing complex symbols, wizards can cast them by drawing just a simple circle. The player who collects the most treasure before one of the players defeats their dungeon’s Boss wins. The set includes 20 double-sided dungeon sheets (four each of the 10 different dungeons) plus character tiles, tokens for keys and orbs, and four dry-erase markers. The game will be available this October with a retail price of $24.99. 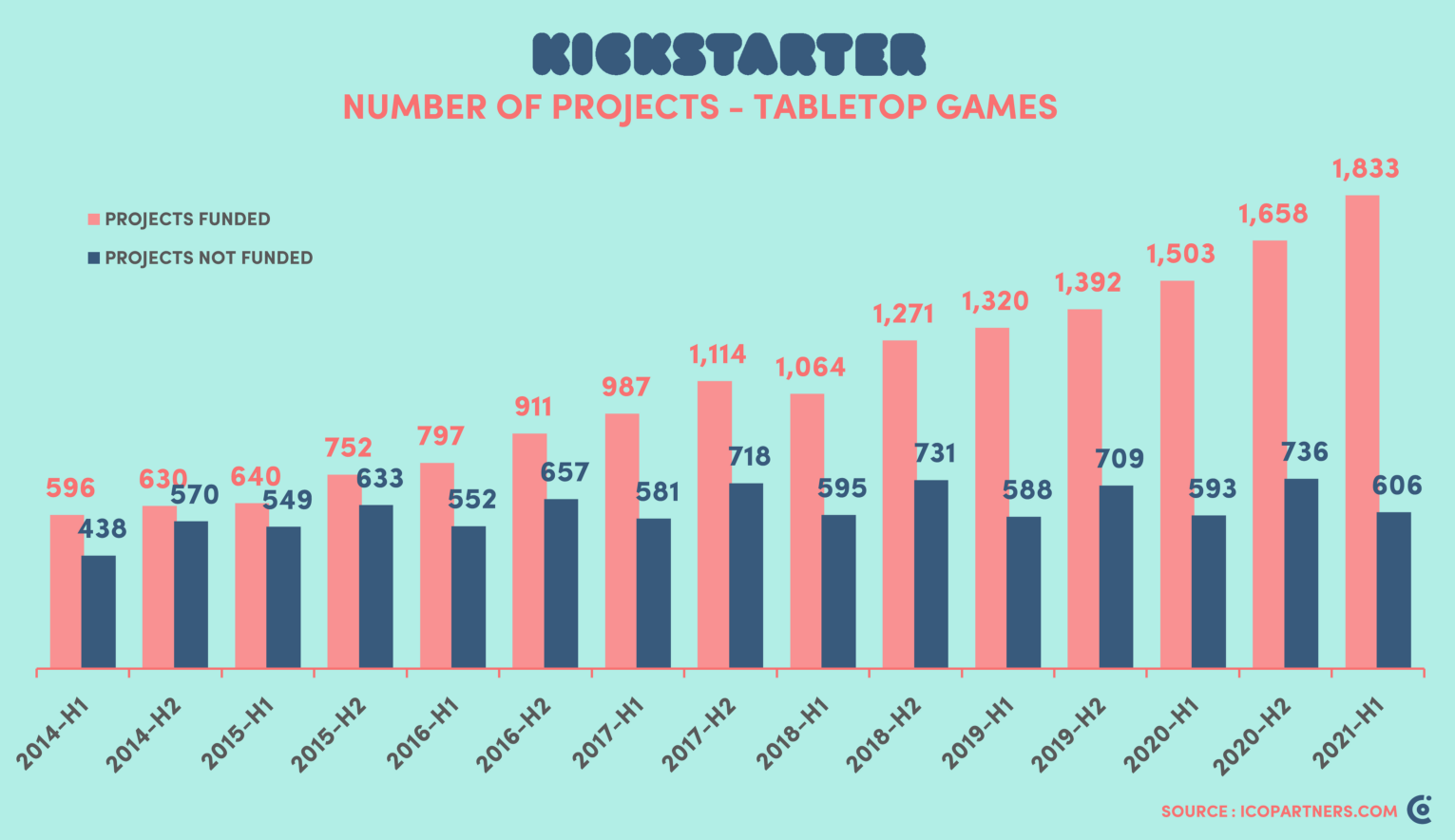 ICO Partners posted an updated look at statistical data for Kickstarter showing once again that tabletop games is growing. For the first half of 2021, there have been 1,833 funded projects in the tabletop gaming category with 606 which did not fund, which is interesting looking at the data going back to 2014 as the number of failed projects has remained consistent between around 450-700 each half-year period while funded projects has risen year-on-year almost every year to get to the 75% funded rate of the most recent period. This means that while the number of overall Kickstarter projects grows every year, proportionately far more of these projects meet their funding goal than do not. Revenue has also gone up with $146 million raised in the first six months of 2021. A handful of successful “super-large” projects making over $500,000 appear to make up the majority of the money raised, while the almost 1000 projects that fund at $10,000 or less make up only a tiny fraction of the total money raised using the platform. It should be noted that this information only goes until July 31, 2021, so only includes five of the so-far nine million-dollar-plus projects from this year.

This year’s Sony PlayStation Showcase featured several new trailers and announcements for the video game platform, including a few related to tabletop games. The iconic game Star Wars: Knights of the Old Republic will get a ground-up remake for PlayStation 5 and PC. Few details are available and it is unknown at this time if the game will keep the D20 System 3.0 rules that made up the numerical core of the original game. A new trailer came out for 2K and Gearbox’s Tiny Tina’s Wonderlands, a spin-off of the Borderlands franchise based on the character Tiny Tina running a Dungeons & Dragons inspired fantasy roleplaying game for other characters from the series. And finally (at least for the tabletop RPG related announcements), a new trailer came out for Vampire: The Masquerade: Bloodhunt featuring our first look at gameplay for the battle royale game set in the World of Darkness.

Was hoping the Magpie offering for FRPGD was going to be an Avatar adventure. Not as excited for a Root adventure.

Regarding kickstarters, I wonder if it's because more creators are realistic around the outcomes and are therefore setting the funding goals appropriately? Or are there actually more people buying more types of games?