Hello everyone, Darryl here with this week’s gaming news! Wizards of the Coast files for injunction against NuTSR, much-delayed Kingmaker Adventure Path for Pathfinder 2e on the way, first The One Ring sourcebook announced, and more!

Don’t forget, you can keep up with all the week’s gaming news in detail with Morrus’ Unofficial Tabletop RPG Talk. This week, Morrus, Peter, and Jessica talk about establishing atmosphere and tone in an RPG.


​
In case you missed it elsewhere on EN World this week: 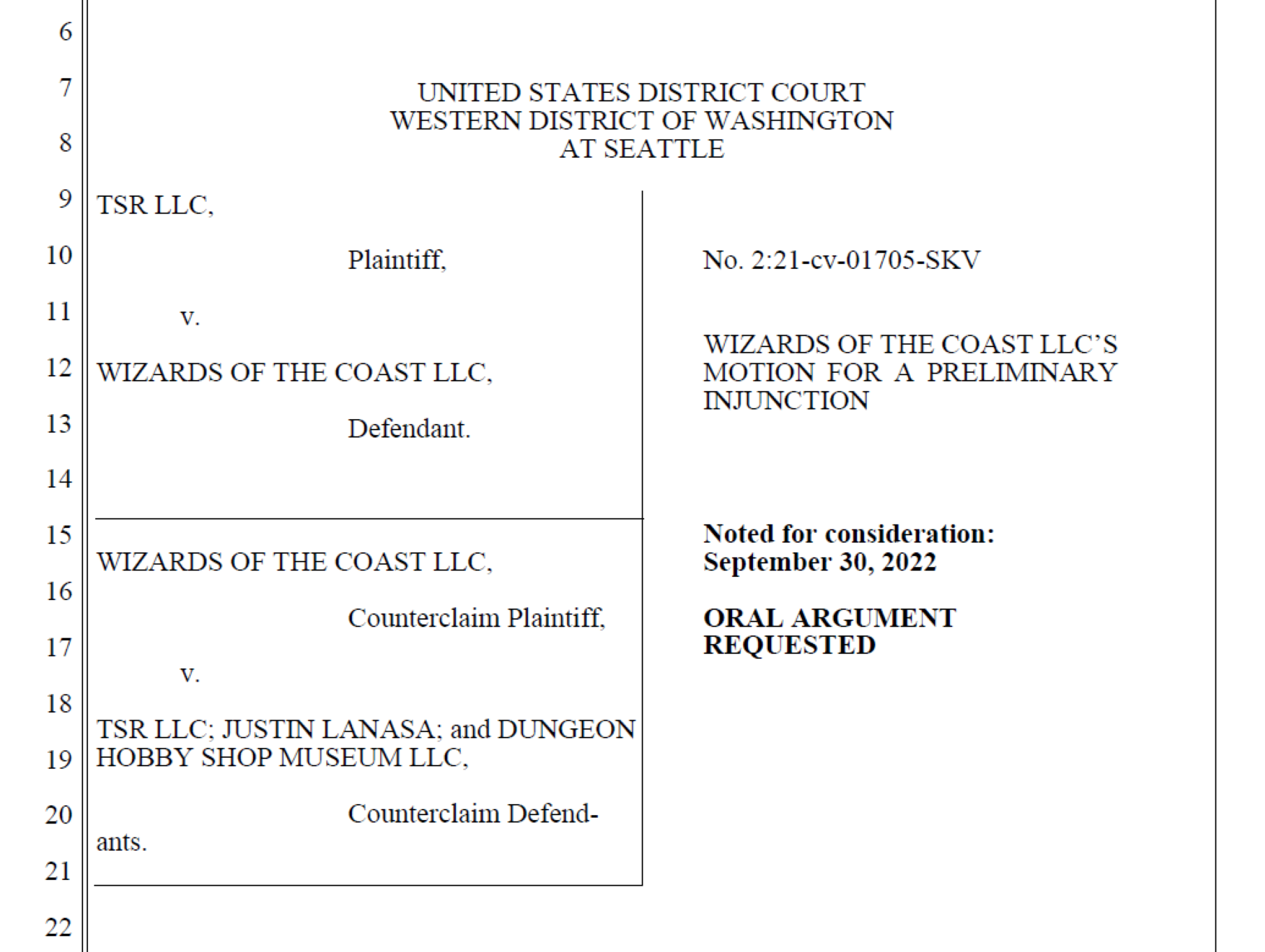 Wizards of the Coast filed a motion for an injunction against Justin LaNasa and TSR LLC to prevent the publication of Star Frontiers: New Genesis. The filing came in three documents totalling well over 100 pages including the motion itself plus two declarations of support, one from the Wizards of the Coast Director of Publishing and Licensing for Dungeons & Dragons Elizabeth M. Schuh and a partner at the law firm representing Wizards in the case, Davis Wright Tremaine LLP, Lauren Rainwater. Combined, the three documents lay out Wizards of the Coast’s case for the injunction by showing a confusion in the marketplace as to the origin of the Star Frontiers: New Genesis document and the offensive content contained within. The motion is noted for consideration on September 30, 2022 with oral arguments requested. And for those who need a refresher on the entire NuTSR saga, Morrus has updated the timeline in “The Full & Glorious History of NuTSR” with the most recent developments. 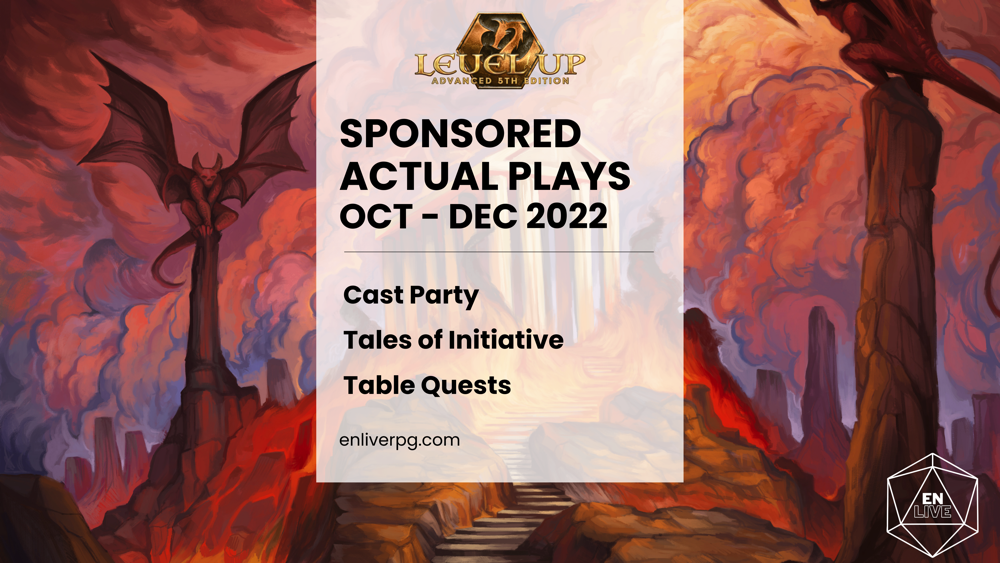 EN Live announced the Winter slate of new live streams for Level Up: Advanced 5th Edition. Cast Party will be playing through the introductory adventure Memories of Holdenshire with Narrator Matt Gordon and players Tal Aviezer as Mercury, Carolyn Fox as Violet, Rachel Savicki as T’Lingbet, and Andy Gannista as Gwyen. The podcast will be available starting October 22 at www.cast-party.com or on your favorite podcasting app. From the Tales of Initiative Twitch channel, we have The Dawn of Vengalia set in a world where the gods have selected delegates from each culture to meet in a neutral village in order to negotiate peace to end a long war, but unbeknownst to them, an evil god is willing himself into existence. The live stream starts on October 2 at 2:00 PM Pacific (5:00 PM Eastern, 10:00 PM BST) and continues every Sunday. Finally, we have Table Quests with the live stream Wish You Were Here. This heist campaign is set in the city of Noria as The Unbranded, a group of misfits looking to escape their rough lives, set their eyes on a crystalline wish worth more than any fortune…if they can stop from betraying one another. The heist starts on October 15 at 7:00 PM Eastern (4:00 PM Pacific, Midnight BST) and continues every Saturday. 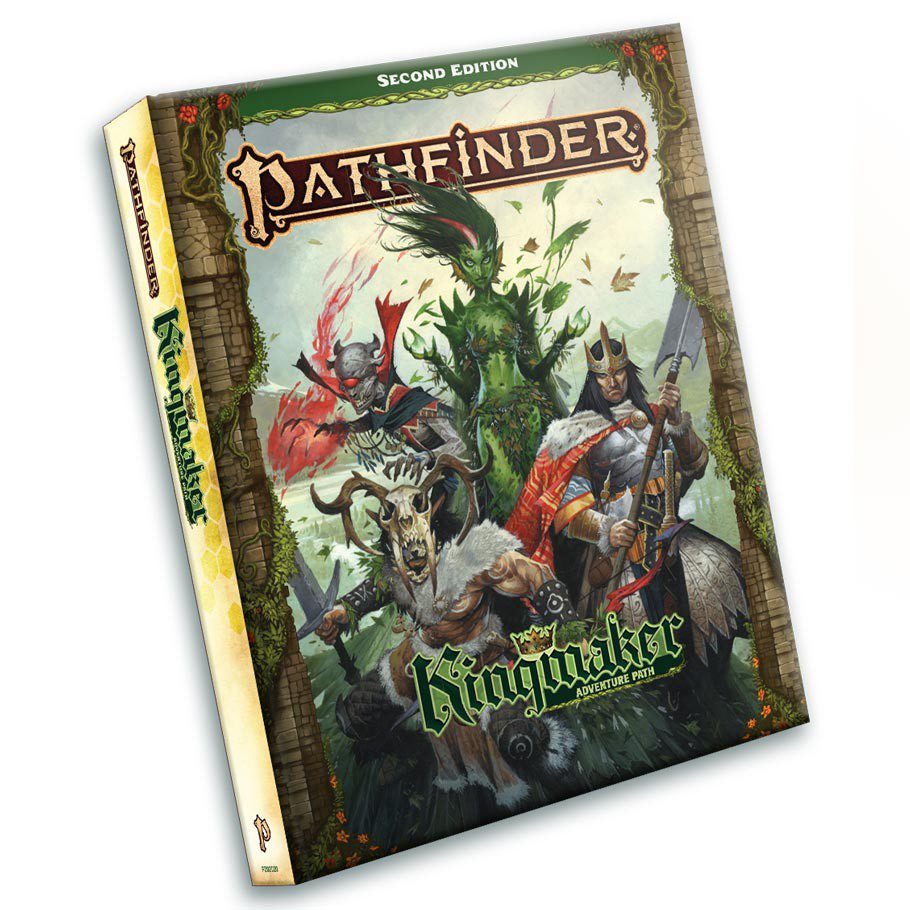 The Pathfinder Second Edition conversion of the popular Kingmaker Adventure Path is finally on its way. The huge 640-page hardcover collects all six chapters of the original Kingmaker campaign in a single volume that will take characters from 1st to 20th level as you explore the Stolen Lands and form a brand-new kingdom. The adventure path will also release with a hardcover Kingmaker Companion Guide with new character options, new feats, new spells, new magical items, and companion characters from the Owlcat Games video game adaptation of the original. And for those who want to experience this adventure using 5e rules, the Pathfinder Kingmaker Bestiary features rules for over 275 monsters, 45 traps and hazards, and companion NPCs using 5e rules ready to slot into the adventure path. The product slate was funded on Game On Tabletop in 2019 raising over half a million dollars in 2019 including late pledges for an expected mid-2021 release, but suffered a series of delays due to the pandemic. The hardcover of the Adventure Path itself is available for $99.99, the Companion for $39.99, and the 5e conversion book for $49.99, all releasing to mass market on November 8. 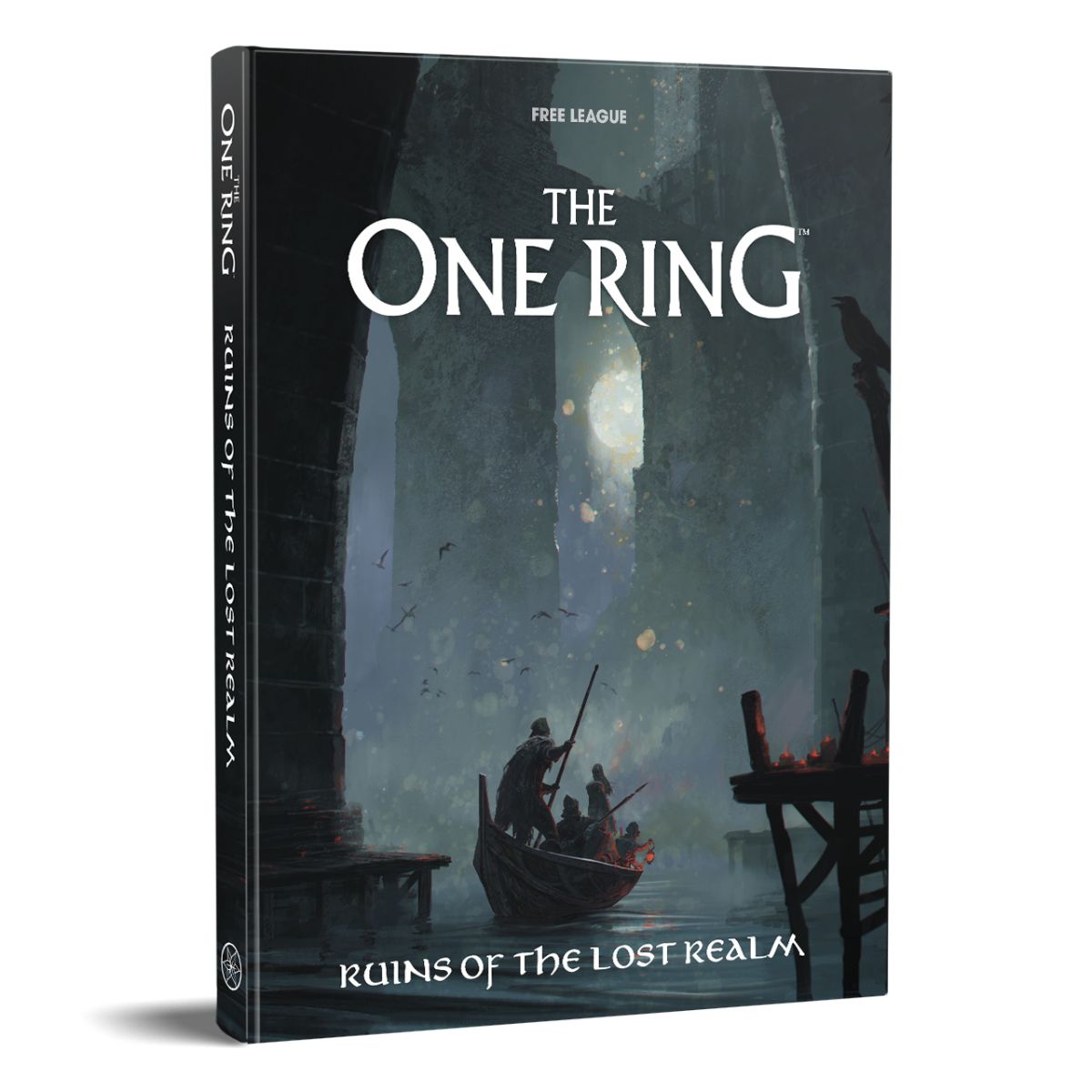 Free League announced the first expansion for The One Ring, the location sourcebook Ruins of the Lost Realm. The book will cover the lands of Eriador, one of the major settings of The Hobbit and Lord of the Rings. The land now contains the settlements of Rivendell, Bree, The Shire, the Grey Havens, but the focus of this book will be the ruined cities of the Kingdom of Arnor including the city of Tharbad, a fortified Númenórean city. In addition to Loremaster guidance with looming threats and agendas that will shape the future of the region, it will also describe a dozen sites of interest both from Tolkien’s books and original for the game. No price has been announced, but the hardcover will be available sometime this Autumn. 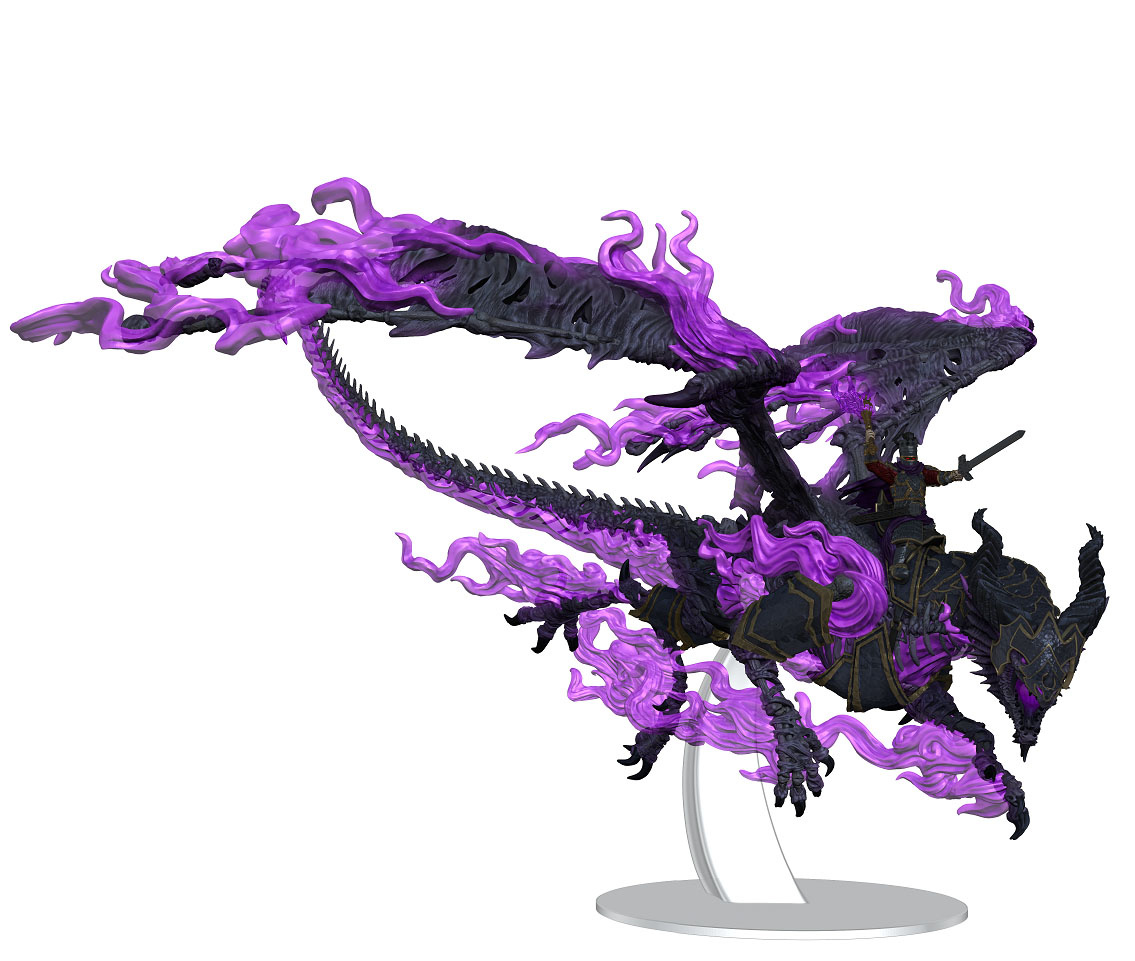 WizKids had a series of new miniature and décor announcements. Starting is the Dungeons & Dragons Blue Dragon Trophy Plaque, part of the series of life-size replica “hunting trophy” style busts of D&D creatures. The blue dragon head is made of foam, rubber, and latex and hand-painted for realistic details. The blue dragon joins the red, black, and green dragons along with the beholder, mindflayer, and owl bear to get the trophy treatment from WizKids. The bust will be available in October with a retail price of $474.99. More Dragonlance pre-painted miniatures are on the way, this time featuring two more dragon rider miniatures. The Red Ruin & Red Dragonnel features a red dragon with a rider wearing red-highlighted chainmail and wielding a lance retailing for $89.99, and we have the man, the myth, the legend Lord Soth himself riding a Greater Death Dragon retailing for $119.99. Both dragon rider sets will be available in April 2023. 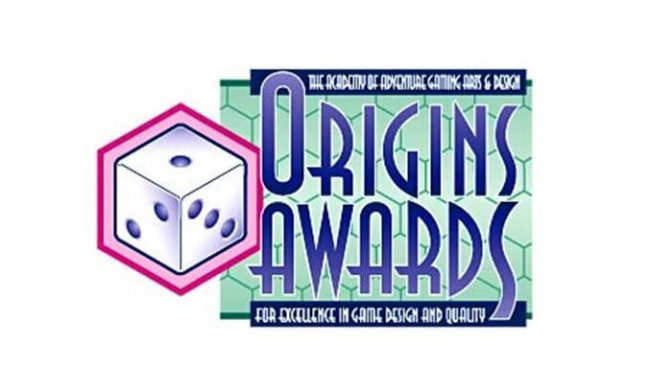 GAMA announced changes to the Origins Awards for the 2022 award season with a reorganization of the categories. The restructuring narrows the category list down from 14 to 12 (still more than the 10 categories of the 2020 awards) that combines several categories down while adding several brand new ones. The roleplaying game category, which was previously three awards based on genre, will now be two awards based on product type: Best Roleplaying Game Core Book and Best Roleplaying Game Supplement. Board games have also been condensed down to a single Best Board Game award from a previous five separate categories, while Best Miniature Game will replace the two separate miniature game categories. The Best Digital Adaptation of a Physical Game category has been discontinued and replaced with two new awards for art: Best Game Artwork (2D) and Best Game Artwork (3D). There will also be a new award for Best Game Review along with two awards independent of game type: Best Children’s Game and Tabletop Game of the Year. The Origins Awards ceremony will take place at the GAMA Expo taking place in Reno, Nevada, from April 24-27.

Dang, I just preordered PF2e Kingmaker this week from an LGS, and the store’s website said it was due for release next week (week of Sept 18, IIRC). I guess I’ll be waiting a bit longer!

Any word about PF2e’s Crown of the Kobold King, which I also preordered??

doctorhook said:
Dang, I just preordered PF2e Kingmaker this week from an LGS, and the store’s website said it was due for release next week (week of Sept 18, IIRC). I guess I’ll be waiting a bit longer!

Any word about PF2e’s Crown of the Kobold King, which I also preordered??
Click to expand...

That's the mass market release date. Orders for hobby channels and directly from Paizo are usually 2-3 weeks earlier. Your store also might have gotten a retailer bundle from the GameOnTabletop campaign, which those started shipping at the end of August.

And I haven't seen anything about Crown of the Kobold King one way or the other, so that's probably still on schedule for the October/November release.

Abstruse said:
That's the mass market release date. Orders for hobby channels and directly from Paizo are usually 2-3 weeks earlier. Your store also might have gotten a retailer bundle from the GameOnTabletop campaign, which those started shipping at the end of August.

And I haven't seen anything about Crown of the Kobold King one way or the other, so that's probably still on schedule for the October/November release.
Click to expand...

For those Level UP streams, how into the details of the rules do they get? I'd love to see something like the Stonetop APs

“The Origins Awards ceremony will take place at the GAMA Expo taking place in Reno, Nevada”

bah! I remember when Origins meant something, man

bah! I remember when Origins meant something, man
Click to expand...

Not quite. GAMA runs Origins so it's the same organization. They changed the location because of the pandemic throwing a massive wrench into convention scheduling and were unable to hold an award ceremony at all for 2021 or 2022. So they're pushing it to the first GAMA convention in April rather than wait until June for Origins.

I dropped in for WAR's art. Gotta say, I wouldn't feel too comfortable squaring off against a guy who could one-hand a two-hander!