Because the Saga of TSR3 has been ongoing for a while, with many landmarks, I thought I'd do a quick timeline for those who haven't had the time (or, frankly, inclination) to keep up with the whole palaver.

As multiple entities refer to themselves as TSR, I will use the nomenclature (1), (2) etc. to distinguish them. However, all the companies below simply use the term "TSR".

The principle people involved with this story are Ernie Gygax (one of Gary Gygax's children), Justin LaNasa (a tattooist, weapon designer, and briefly a politician who refers to himself as Sir Justin LaNasa*), Stephen Dinehart (co-creator of Giantlands with James Ward), and -- later -- Michael K. Hovermale, TSR3's PR officer.

Also linked to TSR3 is the Dungeon Hobby Shop Museum in Lake Geneva, Wisconsin. Much of TSR3’s commercial business appears to be conducted via the museum. 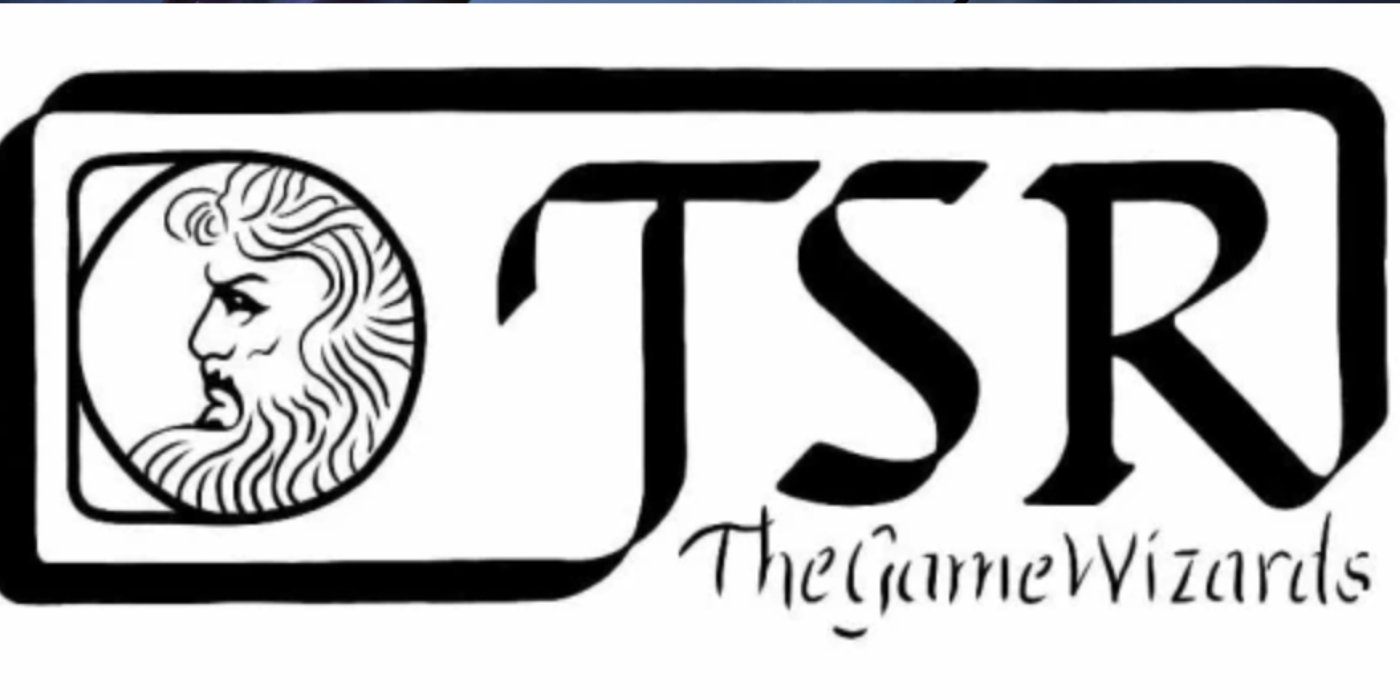 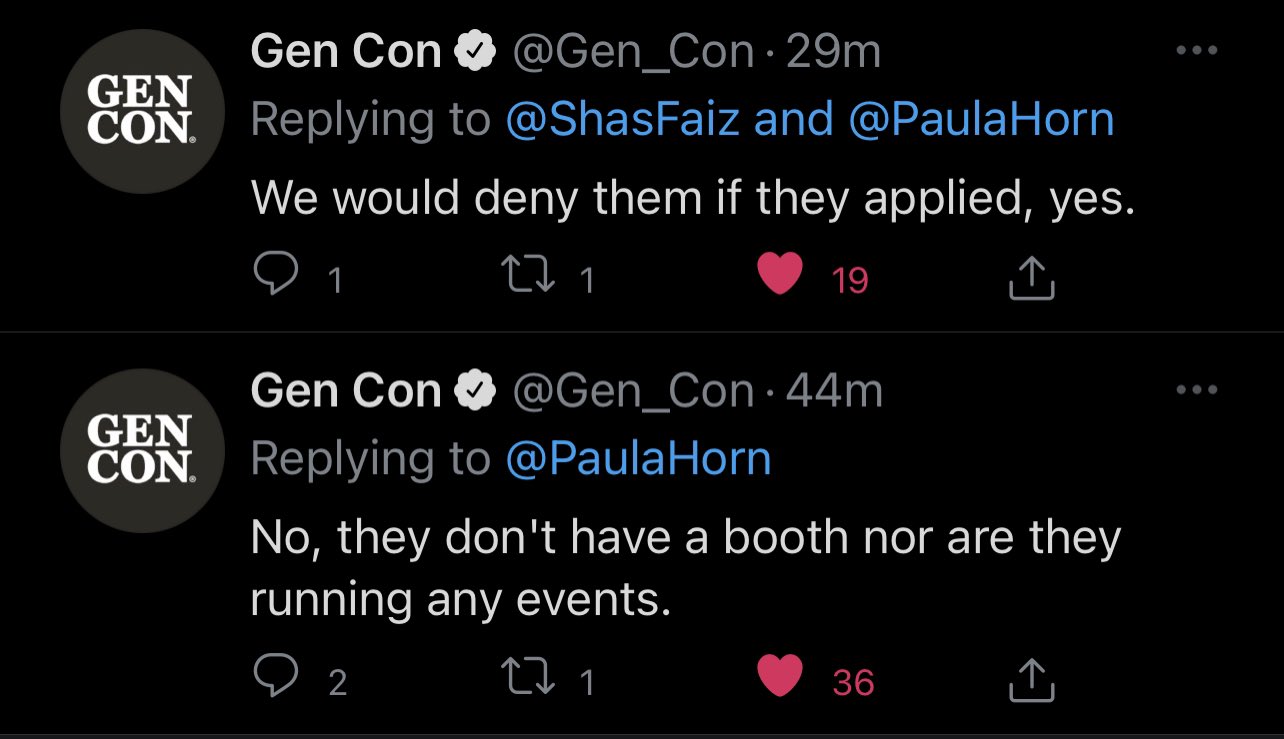 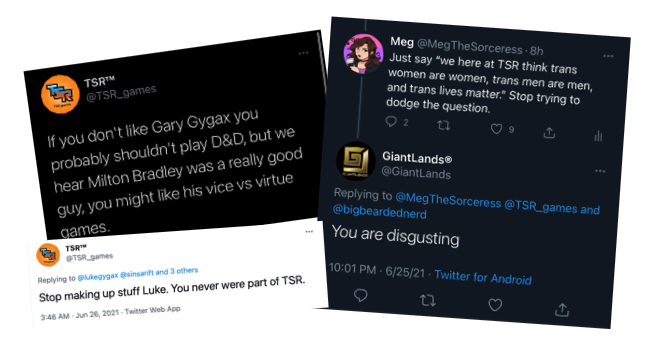 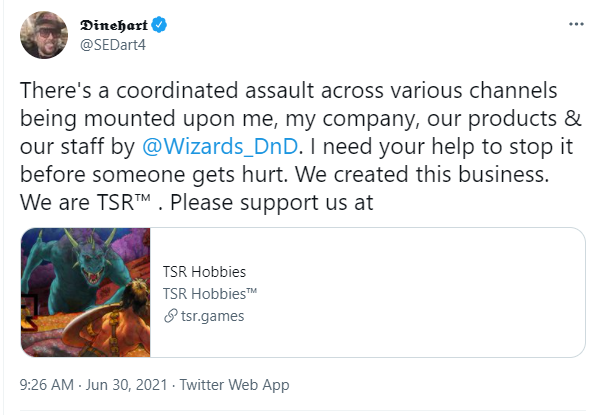 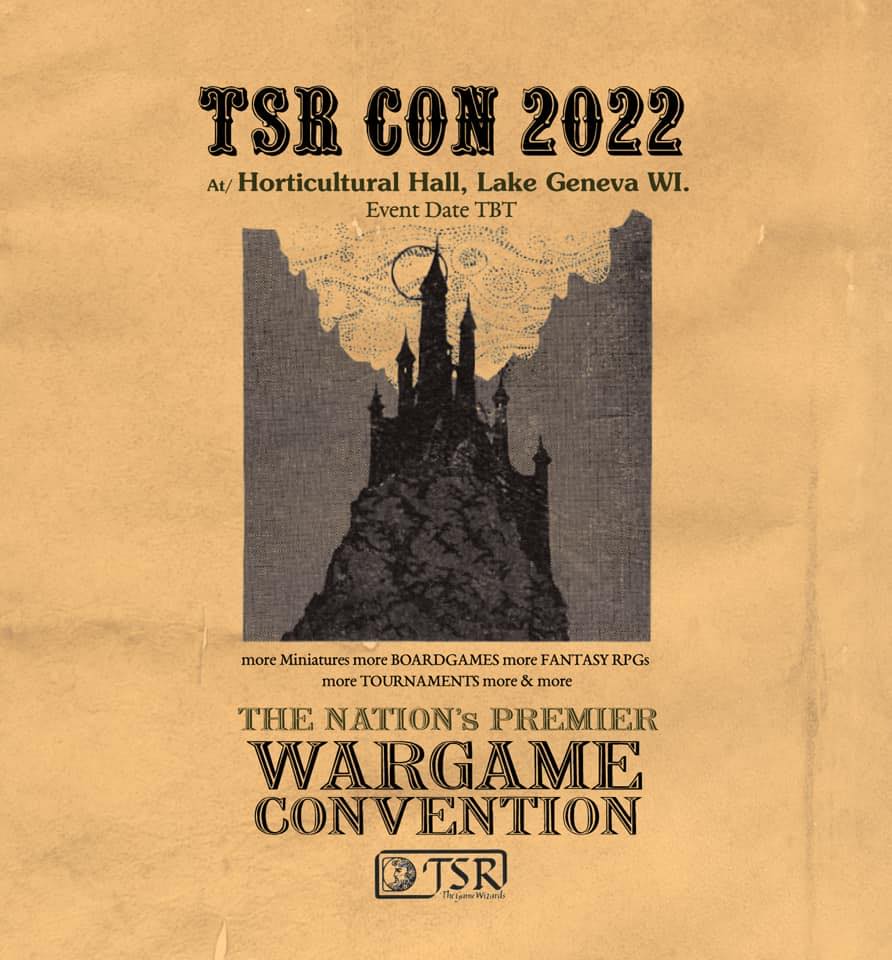 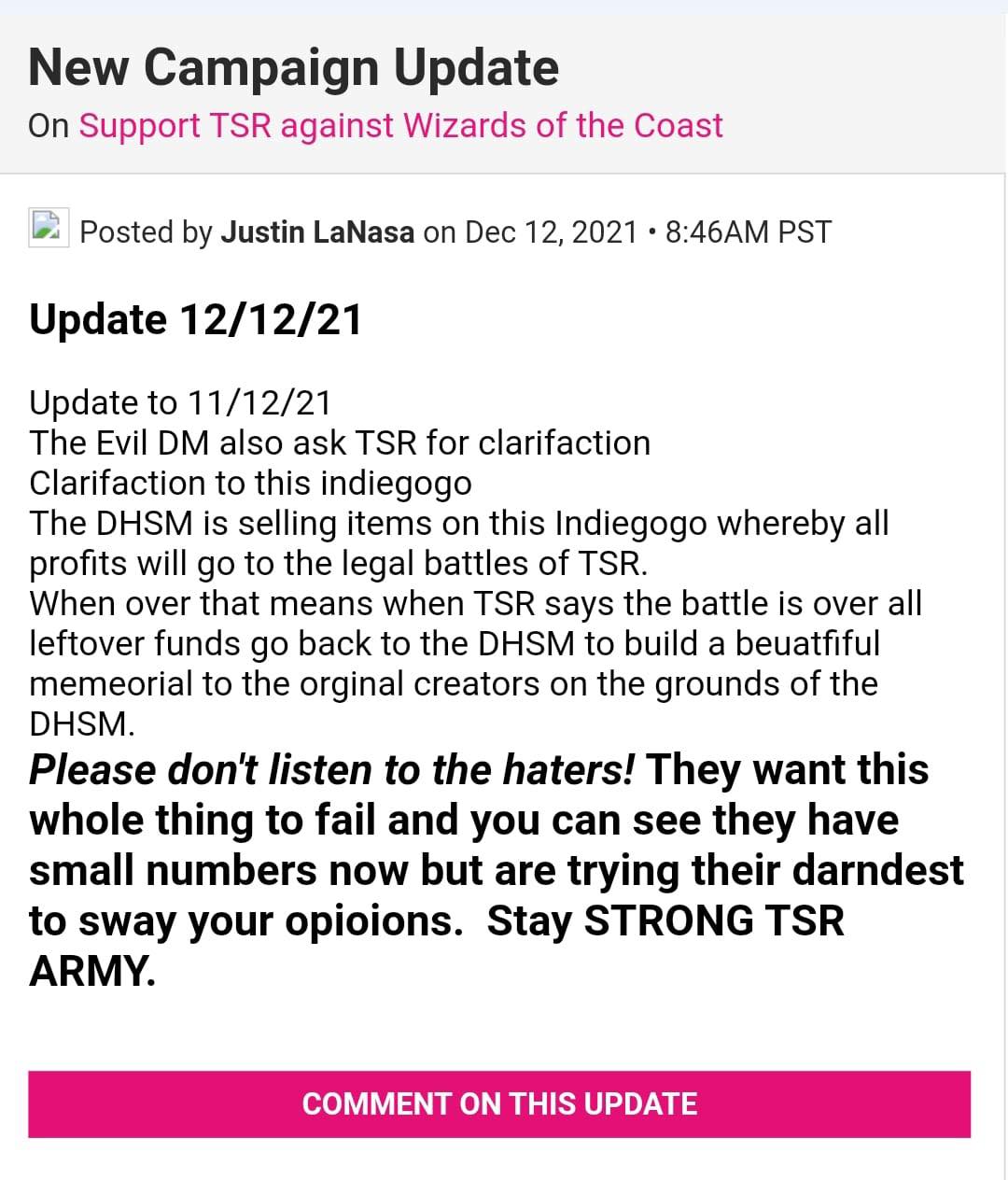 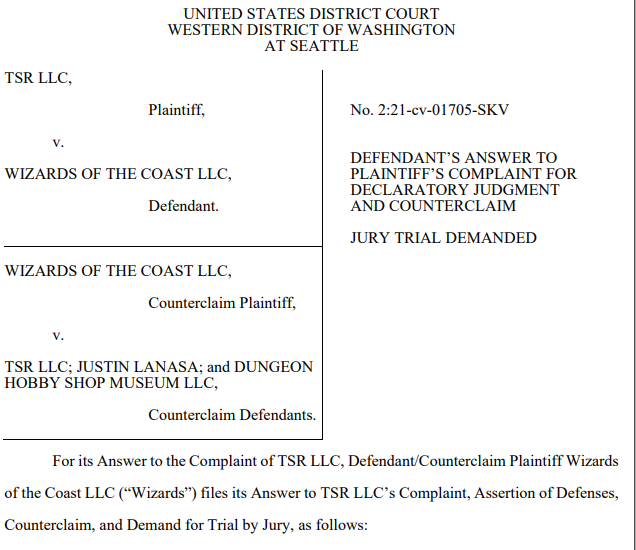 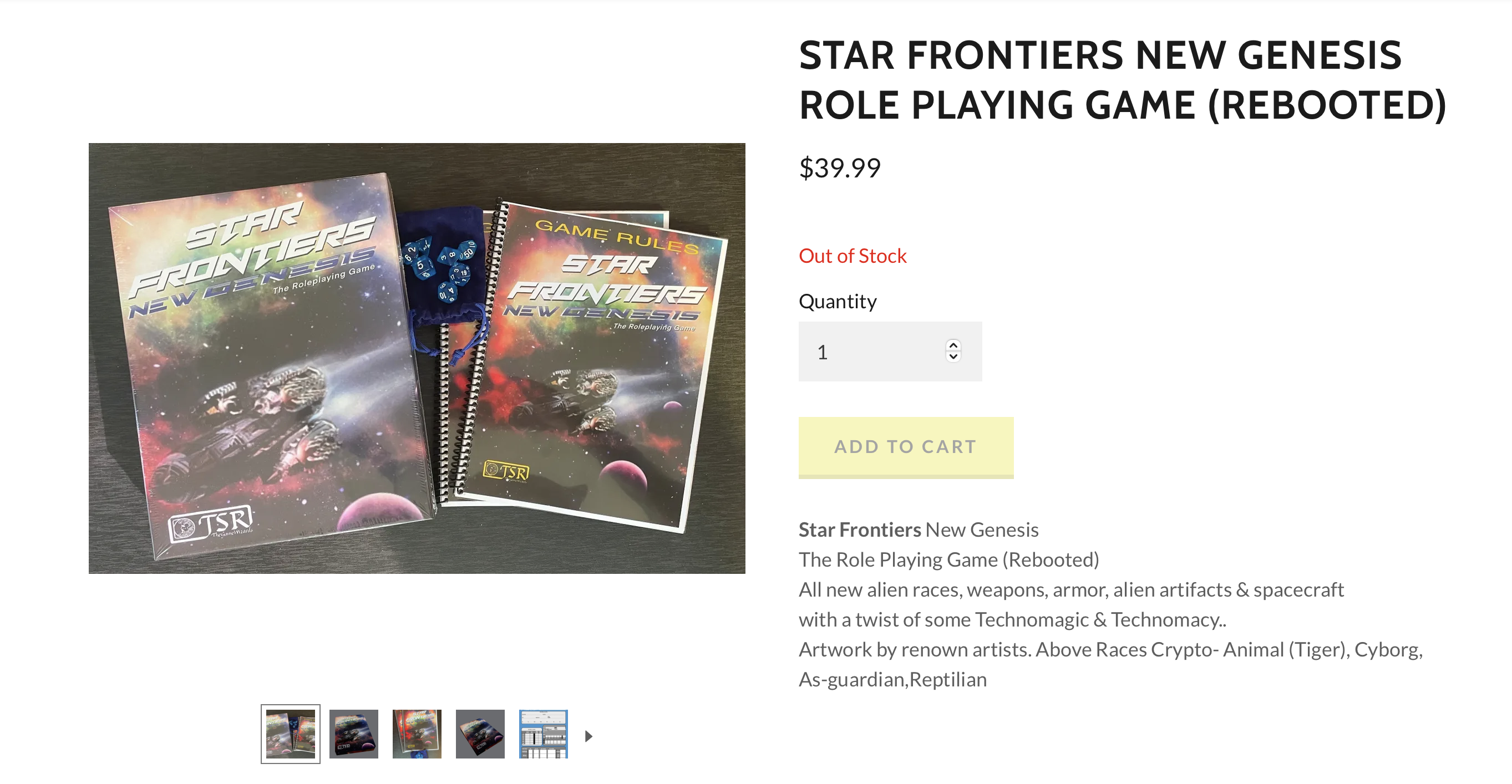 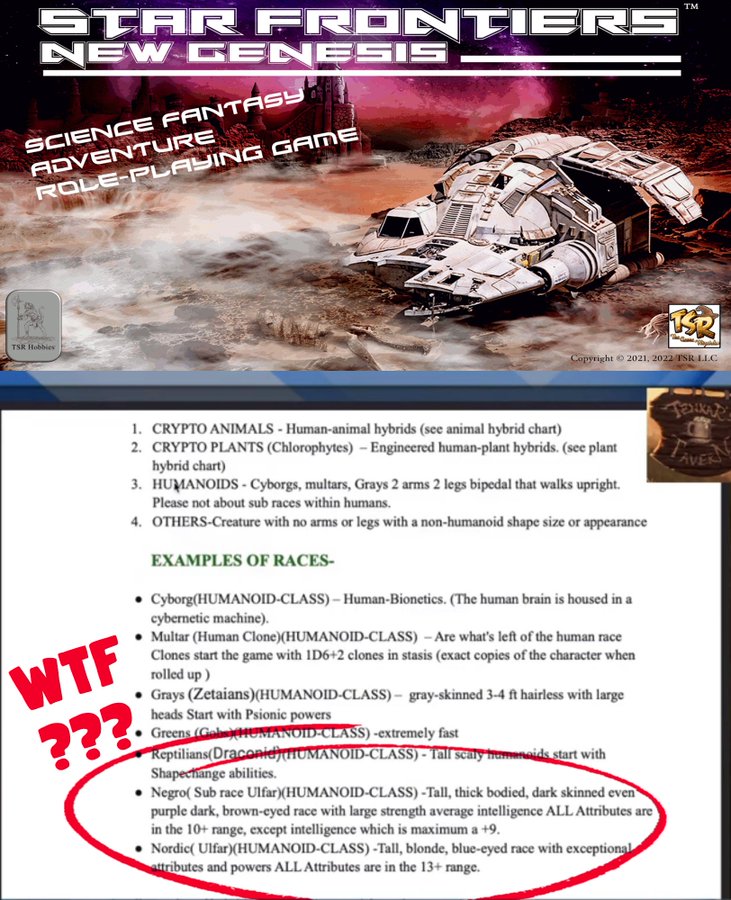 Have I missed anything important? I'll continue updating this as I remember things, or as people remind me of things!

To the best of my knowledge, TSR3 is not actually selling any type of gaming product.

*if anybody has any link to LaNasa's knighthood, please let me know!
Websites
Various websites have come and gone. I'll try to make some sense of it here so you know what site you're actually visiting!

Morrus said:
....
Have I missed anything important?
Click to expand...

Thank you for the succinct summary, Morrus. It's clear, complete, and easy to follow.

Perhaps not important to the rpg world at large, but relevant to us here: September 27, 2021, the fabled Michael appears on the enworld thread "Whatever Happened to TSR's Michael?" He tries to put positive spins on everything but avoids questions about any aspect of TSR3.5 people found questionable.

Morrus said:
Have I missed anything important?
Click to expand...


The WotC filing to cancel TSR3.5's trademark registration was apparently made on December 6th. We only found out about it on the 13th.

It is not clear that TSR3.5 knew about this filing on the 7th, when they filed their lawsuit.

Thank you so much for this, Morrus. It is clear, concise, and very much needed.

TSR's Michael is Michael Hovermale. He started with a title along the lines of "Public Relations Officer" and currently goes by the title of "Chief Creative Officer", which implies that he's pretty high up on the ladder. He's also the person who has the ENWorld account @TSR-Hobbies

Michael started a TSR Discord channel on July 25th. Shortly after TSR started their Indiegogo campaign, he stopped posting there. To the best of my knowledge he was last seen there on December 9th, which was the last official posting that came out of that forum.

Deset Gled said:
TSR's Michael is Michael Hovermale. He started with a title along the lines of "Public Relations Officer" and currently goes by the title of "Chief Creative Officer", which implies that he's pretty high up on the ladder.
Click to expand...

Listen Michael Hovermale has a full staff under him just like Justin LaNasa. There is Mike Hovermall, Michael Malehover, Mickey H. Male and Blip.

According to WotC's Wikipedia page, they announced their acquisition of TSR on April 10, 1997.

September, 1999, is when WotC was bought by Hasbro.

I try to imagine the trial oversees by judge Asmodeus,
With a bunch of drow lawyers,
And Witness from various campaign settings….

Krachek said:
I try to imagine the trial oversees by judge Asmodeus,
With a bunch of drow lawyers,
And Witness from various campaign settings….

That’s the Honorable Judge Asmodeus to you.

Assuming I'm reading these trademark dispute summaries correctly, Gail Gygax was the defendant in these cases, not the plaintiff.

darjr said:
That’s the Honorable Judge Asmodeus to you.
Click to expand...

I got it, my press card just had been revoked!

Wasn't there a whole thing where they announced and "released" a new Star Frontiers product, which wouldn't you know it was immediately sold out and nobody has seen hide nor hair of it since?

Gradine said:
Wasn't there a whole thing where they announced and "released" a new Star Frontiers product, which wouldn't you know it was immediately sold out and nobody has seen hide nor hair of it since?
Click to expand...

About that. !TSR Claimed they were working with one of the humans a actually working with WOTC and helping to keep Starfrontiers alive. !TSR lied about that too.

Morrus said:
Have I missed anything important?
Click to expand...

The "Exhibit A" from the TSR lawsuit provided info on the WotC C&D letter, which came a bit before TSR3 changed some stuff on their website.

Some of the timeline entries imply that these variations of TSR were themselves using "TSR2" or "TSR3" . . . all of that is editorializing from the ENWorld community. Necessary editorializing, to try and keep track of the madness, of course. Each version of this company has gone simply by "TSR".

Also, I'll push back (probably too late) on considering Wonderfilled "TSR3" and LaNasa's branch "TSR3.5" . . . . the way these two lovebirds split up was confusing, made more so by their stellar communication skills, but Dinehart basically dropped using "TSR", took his toys and went home. It's just that some of his toys included the TSR website . . . .

I suppose some of my comments are semantic, but . . . that's what we nerds do.

Also, while it hasn't happened yet (to my knowledge), LaNasa has publicly stated (somewhere, don't remember) that TSR 3 will be refiling in Washington. The battle lives on!

Didn't someone claiming to be Michael from TSR start an account here?

overgeeked said:
Didn't someone claiming to be Michael from TSR start an account here?
Click to expand...

Absolutely. Posts as TSR-Hobbies. Shows up occasionally to pretend nothing is wrong at TSR3.5, try to make polite banter, and not acknowledge direct questions about anything controversial. I, for one, believe it's really him, because a troll wearing a Michael-from-TSR hat would have a lot more fun with it.