What's OLD is NEW is a toolkit oriented roleplaying game system consisting of three core games--a medieval fantasy game, a modern action game, and a futuristic sci-fi game. Each of these games has been available in hardcover since 2016.

Characters are created and advanced using a life-path system, while actions are adjudicated using a flexible d6 dice-pool game. The game is about as 'crunchy' as 5E, but is very different in execution. You can read more about it on the official website.

This year, 2023, we will be releasing the What's OLD is NEW Starter Set. This boxed set will contain a 32-page rulebook, three short adventures (one for each genre), a pile of pregenerated characters, and more. It will contain all you need to get started with WOIN.

In the aftermath of OGL-gate, we will be ensuring that this flexible game system is fully available to third parties via a robust, truly open, and irrevocable license. 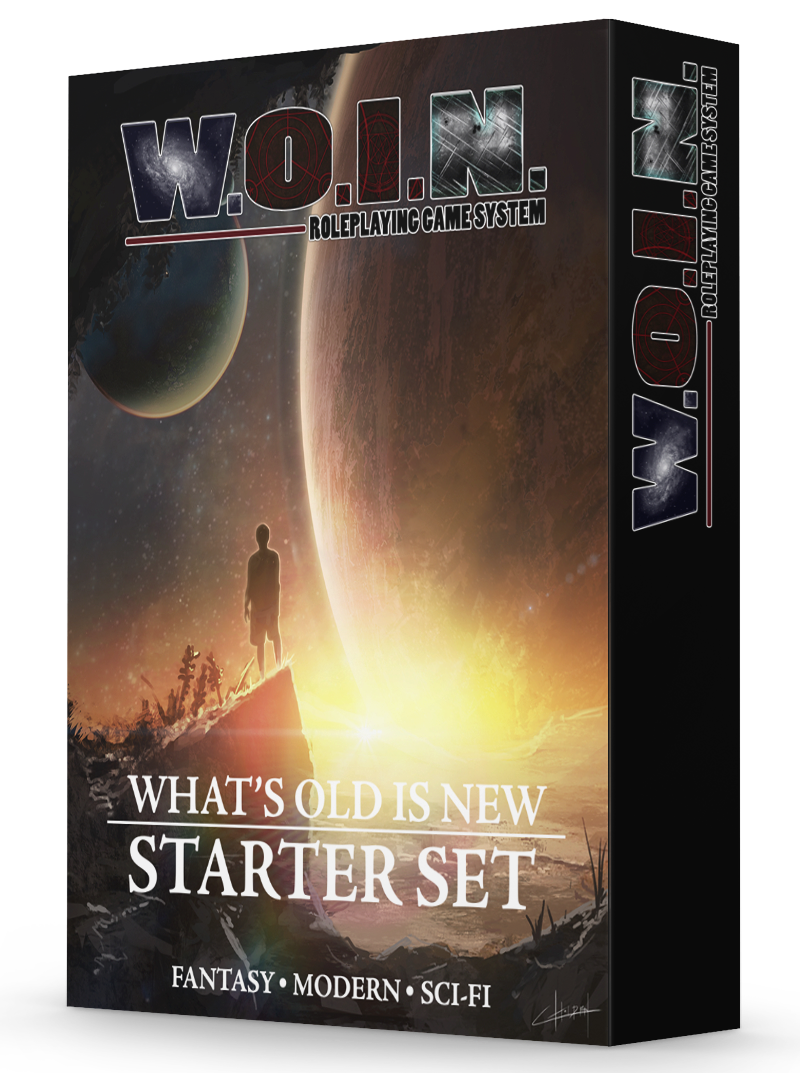 Supporter
WOIN is a medium-crunch game, and it has details where you want details to be. Very exciting news!

Not sure about this specific Starter Set, but maybe the rules will be complete enough to just ignore the full version (works pretty well for e.g. Swords & Wizardry Continual Light or the Alien Starter Set).

Eyes of Nine said:
Depends on what you mean by same system

GURPS did it quite well, for many definitions of well. No doubt it didn't suit some tables; but certainly suited the many games I played of it

GURPS' core mechanic was fine. Everything else was setting specific imo. I'm assuming WOIN will do similar

This. Same with Cortex Prime. Same with Index Card RPG (if you like rules lite).

Eyes of Nine said:
Noooooo - the OGL debacle has been "gate"-ified

It was only a matter of time I suppose

Like I always say, if the Watergate scandal happened today we'd have to call it Watergate-gate.

amethal said:
Like I always say, if the Watergate scandal happened today we'd have to call it Watergate-gate.
Click to expand...

Isn't that a Mitchell & Webb sketch?

It is indeed, although I'm not sure I have ever actually seen it. (So it might not be plagiarism on my part.)

Very nice. Looking forward to it. This going to be Kickstarted?

amethal said:
It is indeed, although I'm not sure I have ever actually seen it. (So it might not be plagiarism on my part.)
Click to expand...

This is why you can't copyright jokes in America.

Excellent news! I'll back this if it goes to Kickstarter.

RareBreed said:
I'm with you. Ironically, I like detailed and crunchy games, but nowadays the vast majority of RPG systems is just narrative bloat.

Take for example the recently released Avatar RPG. I haven't played any Powered by the Apocalypse games before, but the rules are buried in paragraph after paragraph of exposition or explanation. And that's supposed to be a "rules lite" system where you just have a bunch of "moves"? I'm finding it weary reading the almost 300 pages of rules, not to mention the character playbooks which describe the moves each type gets. Another example is the Fate Core rulebook; another supposedly rules-lite game where the book is 300 pages and that doesn't even come with a standard setting! Give me a flow chart with precise actions over reading Tolstoy to figure out how to play.

Contrast this with the 1987 game Living Steel RPG from Leading Edge Games. It used the infamous Phoenix Command Combat System that was supposedly insanely difficult (or at least cumbersome). The core book in the 1st edition was just 115 pages (including background fluff). Including the data tables and weapons, the total was 190 pages. The last 75 pages was basically reference material. Once you got the hang of a few key things, combat was nowhere near as bad or slow as people made it out to be (yes, you had to reference several charts, but it wasn't that time consuming). Combats were actually faster than pretty much any game I played, because one hit usually rendered the target out of combat.

I mean, how did we go from the 98 page Call of Cthulhu 2e rulebook, to the 449 page 7e? BRP hasn't changed that much over the years.

Good points, RareBreed. I am no RPG industry insider, but I feel companies are caught between a rock and a hard place -- they are incentivized to produce big books. Many people like big, hardbound monstrosities. They feel as though they are getting more for their money and that bigger is better. Plus, big books sell for more. Take a 40-page system and expand it to 350 pages -- now you've got something! A few systems warrant a big book, but most probably don't. They are little systems encased in 250 pages of very tedious prose.

RareBreed said:
Another example is the Fate Core rulebook; another supposedly rules-lite game where the book is 300 pages and that doesn't even come with a standard setting! Give me a flow chart with precise actions over reading Tolstoy to figure out how to play.
Click to expand...

I appreciate your general point, but I feel compelled to defend Fate Core here.

The book isn't full sized (not sure what the term is; digest sized?) and there is a lot of white space. To pick a page at random; page 287 has 192 words on it. Even a comparatively word-dense page, like page 57, only has 335 words on it. You can't compare that to (say) page 36 of the Castles and Crusades Players Handbook, which is 962 words.

And Fate Condensed, which is almost the same game as Fate Core, is also available (the PDF is pay what you want) and is only 68 pages.

I love this news. I already own the v1.2 rulebooks for NOW, NEW, and OLD, so my only question is whether the new 32 page rulebook will be some sort of new v 1.3 release that incorporates errata and FAQs that have wound up being discussed on this forum, provided in EONS, etc.? If it does, then I'd definitely buy it!

Sale [Chaosium] Want to try a new TTRPG in 2023? Our Starter Sets are just 99c for the next week!