The special features tables for magic items are among 5E’s most flavorful additions. These details grant even the plainest of such items a unique feel. Still, any given list of options only remains fresh for so long. Presented in this series are additional random tables, adding new details and features. In this installment, veteran writer Ari Marmell offers new origins for your magic items. 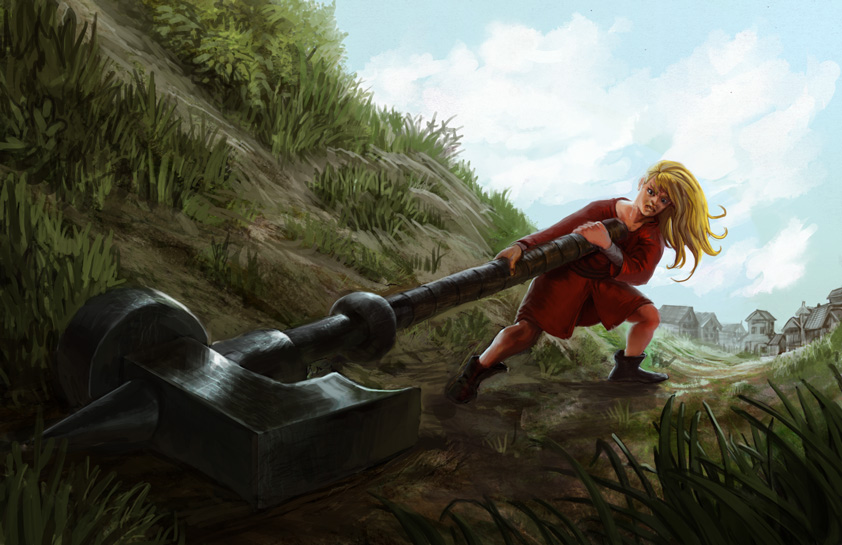 Who Created It or Was Intended to Use It? Roll 1d20 on the table below!

1-2. Accidental
This item was never deliberately enchanted, but acquired its magic by chance. Perhaps it sat for ages amidst other magics, absorbing their energy, or was used to strike a death blow against a fiend performing some great ritual. It likely appears old and used, but still in good condition.

3. Ancestral Bloodline
Crafted for a particular family, this item gained its magic from multiple generations of their belief and veneration. It bears a family crest, though it may not be immediately obvious. Members of the bloodline want it returned if they learn of it, and others might assume the bearer is related to the original family.

4-5. Aquatic
Crafted by merfolk, tritons, or similar aquatic (but non-elemental) races, this item is made of coral, sea plants, and scales. Using this item underwater does not impose disadvantage even if it normally would (such as attacking with certain weapons), nor does it count toward encumbrance for determining penalties to swimming.

6. Dawncraft
This ancient item comes from the dawn of the humanoid age, before humans, elves, and dwarves became—culturally, physically, even mentally—what they are today. It is crude, crafted of bone, stone, or poorly tanned animal pelt, and may be adorned with feathers, small bones, or other fetishes.

7. Divine Gift
No mortal hands crafted this item. It was placed by the gods themselves, or agents thereof, for mortals to find—perhaps intended for a great hero on a legendary quest, or maybe simply to see what they’ll do with it. The item is impossibly perfect in all respects. It doubles as a (non-magical) holy symbol.

8. Futurecraft
This item is from the future, or from a civilization far beyond the world on which it was found. Its magics might be activated by small buttons or switches. Its lines are sleek, its metals and fabrics unidentifiable, and may even consist of substances completely unknown to the campaign setting.

9. Incarnated Magic
The item sprang forth whole, its physical and mystical properties already intact, from more powerful magic, such as a Wish or a lucky draw from a Deck of Many Things. Most such items are remarkably plain, lacking any artistic flourish or individual touch.

10. Legendary Crafter
Spoken of in history, legend, and song, a nigh-mythical smith or crafter created this item. So skilled was this artisan that items they created were innately magical, requiring no ritual or enchantment to gain their power. This item is expertly made, and bears the personal sigil of its creator.

11. Offering.
One race or culture made this item as a gift to another, perhaps to commemorate a treaty, as a sign of friendship, or under duress. Choose two appropriate origins from these tables, one as the giver and one as the receiver; the item has some traits of both.

12-13. Orc
This item is crude, with ragged edges and dangling strips of material, but brutally functional. If a weapon, it grows warm whenever it delivers a critical hit. Orcs react with hostility to an non-orc displaying the item.

14. Planar Battlefield
The afterlives of several gods or pantheons are everlasting battlefields, where souls are reborn every morning to fight again. This item—most appropriately a weapon, shield, or armor, but any item is justifiable with the right story—is a creation of one of those planes, intended to equip its eternal warriors. It bears the symbols of that plane or its gods.

15. Planar Echo
This is a “copy” of a mundane item from the material plane, native to the Plane of Shadow, the Plane of the Fey, or other echoes of the real world. Due to planar vagaries, this copy is magical even though the original is not. Items native to Shadow are dim, lighter than expected, and cold to the touch. Those native to the world of the Fey resemble fey-made items (see the DMG), but occasionally change shape or color.

16. Servant of Chaos
This item is made of strange, unidentifiable materials. Its design is uneven, imbalanced, with excessive parts or flourishes that serve no obvious purpose. Extraplanar creatures of Law find its presence repulsive.

17. Servant of Order
Minimalist and straightforward, symmetrical and technically perfect, this item strikes a precise balance between form and function. Extraplanar creatures of Chaos find its presence repulsive.

18. Shapeshifter
This item appears to be an average example of its type. When wielded by a shapeshifter, such as a doppelganger, it changes appearance to match whatever guise the wielder assumes, even if items are normally excluded from that change. The item’s basic nature is not affected, only the specifics of its appearance.

19. Titan
Made either by the creations of the gods themselves, for use by their servants, or by mortals who venerate them, this item bears icons of religious significance, forgotten history, and possibly of widespread destruction. It weighs 20% more than normal items of its type. If this item deals damage, it does one additional point of damage per attack or per spell against inanimate objects.

Ancestral Bloodline warhammer - being hit by this literally stamps you as somebody who crossed that noble family (and presumably earned their wrath). Giant-sized - as in the pic - for best effect.

Love it. Some of these look like a blast to try and play.

Love it, I've just done my first batch of level 5-12 items and will incorporate these into the next lot!

These are great. Some of my favourite tables from the DMG (and 3E's DMG 2 ).

Connorsrpg said:
These are great. Some of my favourite tables from the DMG (and 3E's DMG 2 ).
Click to expand...

I couldn’t agree more. This are great.

Hey, is Ari going to be a regular article writer here? I liked his EN5ider articles and he is a tempered and interesting voice on the forums here.
(Not to mention some of the awesome D&D books he has written. My favs: 3E Heroes of Horror & 4E Advanced Player's Guide).

Connorsrpg said:
Hey, is Ari going to be a regular article writer here?
Click to expand...

Well, I'm not a regular as in "someone who has a weekly column" or anything like that. But I have a good working relationship with Russ, so I imagine that whenever I have an idea that fits into the short article format, he and I will work something out to get it up on the site.

And of course, there are the other installments of this series of random tables. The second went up early today, and the other two should be coming over the next week or two.