DalkonCledwin said:
[sblock=OOC]Scott, where exactly is Heinrich from? Is it the Landadel Baronies? Because if it is, Lyrra might actually understand his native dialect and be able to speak it in turn. I was just wondering.[/sblock]

Lyrra's eyes glaze over as a flurry of activity breaks out after the conclusion of the comedy act. This was far more activity than she could ever have hoped for. Then someone mentions something called the Sithir? Mountains, She had never heard of these Mountains before... "Where are these Sith'er mountains? I don't recognize that name." And finally the man called Heinrich spoke in a language she thought she recognized...
Click to expand...

Catching Morgryms attention, he draws what seems to be sulfur match from his backpack. He ignites it and quickily draws a rough map made of smoke in the air. " lass, it's here on the eastern continent of E'n. " and before the map disappears, the alchemist adds a x to mark the capitol " ... and this is where I am from. The magnificent city of precious metals and good craftsmanship, but to get there you need to travel over vast treacherous mountains and wicked underground paths ". Morgrym scratches his head to emphasize his point " I am actually surprised I got here whole "

Cyclopean said:
"The Seithr mountains, Lyrra, were my first home. I am no longer welcome there," says Tirgas with some discomfort. "It seems the lad hails from there as well." Nodding in thanks to Dame Morrogrim, Tirgras again turns to Heinrich and Morgrym and says, "Why don't you two come join us at Dame Morrogrim's table? Her food is good and her generosity extraordinary."
Click to expand...

When Morgrym hears the proposition of free food he is sold and jumps right out of his seat. He picks up his backpack and finds a chair at Dame Morrogrim's table . With a wolfish grin, he says " Ladies, Gents " before ravenously throwing himself at what ever food on the table, especially the crisps. " aye, the lass is generous indeed " he whispers to Tigras.

Turning to the host Dame Morrogrim, without explanation, he asks bluntly " what do you wish to know ? "


Scott DeWar said:
Heinrich nods slowly and sadly, "Ja, like Düster Haus, not to go back there." He movers the Dame M's table, but does not par take of the food yet.
Click to expand...

Cyclopean said:
Tirgas gives Heinrich a sympathetic smile and nod. "A fellow exile, then. I somehow doubt that you were compelled to leave this Düster Haus as a result of forswearing all clan allegiances and obligations in a druidic oath, however. If I may ask, what was it that drove you to Venza?"
Click to expand...

Taking notice of the conversation, he does not however participate, interested in knowing Heinrich's answer.

"Unspeakable" is all he says, then seems to withdraws from the conversation.

"Heinrich is it? Your dialect seems familiar to me? It is similar to my own. Do you by chance hail from the Landadel Baronies somewhere?" Lyrra asks Heinrich with a friendly smile on her face.

Heinrich notices suddenly that a third(?) inquarry of his past has been made and suddenly shifts to the look of a cornered wild animal. He feels the element of fire with in him wanting to burst out, but he has loong learned to control that urge. He concentrates to calm down, then lets out a very loud, long sigh.

"I am vanted man in home barony. I burn Baron to protect Parents."
C

Tirgas says "ah" ​and looks away.

Heinrich stands and moves to the hearth. The fire perks up until he sits at the stone base, the fire seemingly becomes sulky - much like the wizard's mood. The flames lower to almost the shape of a sad hound sitting at his master's feet.

Dame Morrogrim ignores the attack on her food by the new guests. She intently observes map created in smoke and then shifts her attention to Heinrich. She silently watches him over her glass, her hazel eyes dancing with specks of gold in the candlelight, as she sips wine.

Coming back from the bathroom, Robert sees Morgrym moved on to another table (and possible victims for his poker dice skills) and Heinrich glooming at the fire place. Getting two glasses of milk from the bar, Robert goes to Heinrich.

"So Heinrich, back in the bathroom I have seen some dirty limericks written on the walls in the dialect you speak. You wouldn't be the author of it, would you?" smiling, with intend to cheer Heinrichs mood, Robert offers a glass of milk to him "Here drink, it is really good for you and tastes delicious. Prost."

Dame Morrogrim sets her glass down, snatches up her deck of cards and brushes the crumbs off the table while smoothing out the purple table cloth. She drops her gaze at Heinrich and begins to skillfully shuffle the cards. She places three cards face up in front of her, pausing at each to contemplate the image.

Once the third card is placed, she reviews all three together. With a single, deft movement, she picks up all three cards, turns them over and returns them to the deck.

Setting the deck in front of her, she retrieves her wine glass and sips slowly, while her gaze returns to Heinrich.

Hienrich takes the offered glas, his expression softens a little as he returns the salute, "Prost". He draws a long pull of the cold milk, belches and then gets a mischivious look in his eyes as they narrow aand slowly shift towards the direction of the privy.

"Vas any limrick uf Baron Staben von Drei-Spitzen? If still there, ja might haf been me"

"Prost, To goot friends!" His toast is directed to all in the tavern.

Grayn said:
Once the third card is placed, she reviews all three together. With a single, deft movement, she picks up all three cards, turns them over and returns them to the deck.

Setting the deck in front of her, she retrieves her wine glass and sips slowly, while her gaze returns to Heinrich.
Click to expand...

"yes it still there, also one about 'große Brüste'. Needed some time to figure out what that meant." Robert smirks.
C

If Tirgas feels guilty for upsetting Heinrich, he does not show it. "Do you suppose I should go apologize?" ​he asks Morgrym.

Lindeloef said:
"yes it still there, also one about 'große Brüste'. Needed some time to figure out what that meant." Robert smirks.
Click to expand...

Heinrich sets his glass down, rases his hands cupped over his pectoral muscles and says with a smirk, "Huge tracks uf land!"

Tirgas notices Dame Sienna's tarot cards for the first time. "What, exactly, are those for?" he asks intently. It seems that Heinrich's reaction ill reaction to questioning has only made him more curious, to the point where he doesn't even wait for Morgrym's response.

"They are my preferred tools of my trade, Tirgas. They are used for looking beyond the veil and provide counsel to those that seek it. Unfortunately, they are rarely exact." Dame Morrogrim explains. "Is there something you would like to know?"
S

After sipping on his drink for a few minutes, Ellamin wanders over to the crowd, watching quietly as he takes the measure of all assembled.
C

"Many things," says Tirgas, grinning. After spending a few moments with his brow furrowed in thought, his face once again assumes a serene expression. "Could you tell me if I am acting in accordance with the will of my god?"

An unescorted young woman enters the Dunn Wright Inn. At first glance one would think her in her teens but a second would clarify that that impression was given by her height, at just under five feet tall, and that she is probably some few years over twenty. She carries herself with confidence which adds to her natural beauty: long auburn hair, green eyes, and pale skin only slightly marred by the sun. Her clothing is well made and decorated with a tasteful amount of excess that accentuates her attractiveness. The only jarring piece of the ensemble is the blackened steel terbutje that hangs from a sword harness at her waist. The jagged blade almost scrapes the floor.

She pauses a moment as the door swings shut and scans the interior to see if any of her friends are present. Not seeing anyone that she knows well she makes her way to the bar, greeting acquaintances and those she knows by sight but not by name with a nod and a friendly smile. At the bar she orders a bottle of wine and when it arrives with a glass she peers into the glass obviously wondering if it is one that Grog has cleaned or if one of the other staff performed the task.

Grog turns away to help another customer and the young woman turns to again survey the common room, this time for an empty seat. 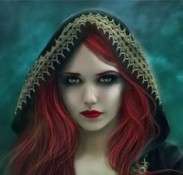