I'm playing a wizard in our new campaign, and my plan is to take no damage spells outside of cantrips. No Fireball, no Magic Missile, no Disintegrate, none of that. Now, I don't want to hear about why this isn't optimal. I know it isn't! If this wizard ends up dead, oh well, new character sheets are cheap.

I know about the big ones, like Hold Person, Hypnotic Pattern, Fear, Sleep, Haste, etc. Does anyone have any favorite non-damage spells that are a little more off the wall?

Are the other players on board with this? I know that it does not matter and all PCs can play together, but they may be expecting Tim, the Enchanter and end up with Jeff Dunham. 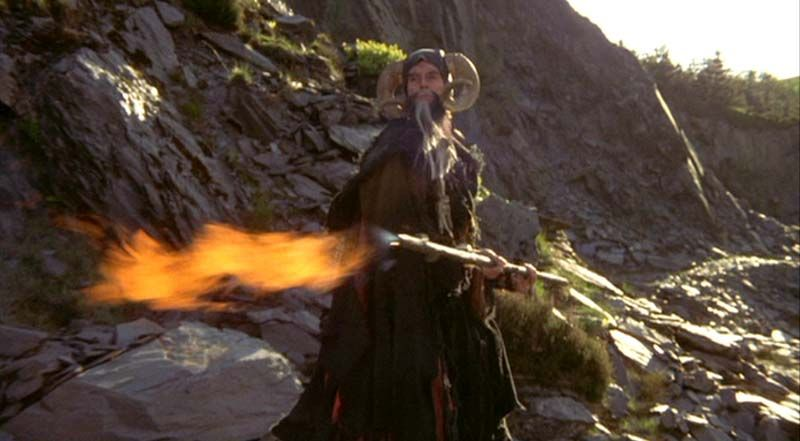 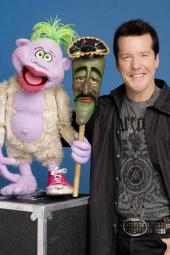 For something more useful, you will need more defense and utility spells since you are not going with offensive spells. Things like invisibility and levitate help scouting and sneaking. Great to cast on other PCs to give them a boost. This leaves you with defense like shields and walls to block weapon attacks on you or to block bad guys from certain areas of the battlefield.

A lot may depend on the DM and style of play. A lot of combats or dungeon crawls may mean you need a few offensive spells. A lot of city mysteries or roleplay may mean this is a great choice.

In prior editions grease, web, and charm monster were big non-damaging go-to attack spells I used a lot in combat.

Suggestion is one I considered a lot in 5e as a bard.

I would consider Color Spray and Sleep essential 1st level spells for such a build. They can take enemies out of combat without dealing any damage and can be upcast to still be useful at higher levels (there's a thread somewhere arguing the effectiveness of sleep). Also consider Find Familiar. That makes your non-damaging wizard a great scout.

For 2nd level Blindness/Deafness is great for making 1 enemy combatant much less dangerous and easy to hit and Blur can make one of your own tanks much harder to kill. Phantasmal Force can be a great spell depending on your DM and the campaign.

3rd level spells would probably include Bestow Curse (although you have to move into melee range), Counterspell (if you face any casters), and Slow. Major Image could also be very useful or almost useless depending on your DM and his play style (as well as your creativity).

fearsomepirate said:
I'm playing a wizard in our new campaign, and my plan is to take no damage spells outside of cantrips. No Fireball, no Magic Missile, no Disintegrate, none of that. Now, I don't want to hear about why this isn't optimal. I know it isn't! If this wizard ends up dead, oh well, new character sheets are cheap.

I know about the big ones, like Hold Person, Hypnotic Pattern, Fear, Sleep, Haste, etc. Does anyone have any favorite non-damage spells that are a little more off the wall?

Protection from good and evil, blur, suggestion, levitate, fly, enlarge/reduce, grease, mage armor, misty step. Those are my favorite combat spells aside from damaging. There are a ton of non-combat too.

If you really want to challenge yourself and take non-damaging cantrips you can take Mold Earth, Gust, and Prestidigitation. Mold Earth is actually quite useful outdoors if you have a few minutes to prep the battlefield. Gust can be used to move your enemies out of melee with your tanks (at least for a moment) and maybe into a pit you've prepared beforehand (with Mold Earth).

Arvok said:
3rd level spells would probably include Bestow Curse (although you have to move into melee range), Counterspell (if you face any casters), and Slow. Major Image could also be very useful or almost useless depending on your DM and his play style (as well as your creativity).
Click to expand...

I dunno, 5e bestow curse is iffy under the best of conditions because of concentration. In this case that concentration is going to hurt even more by conflicting with actual good spells

tetrasodium said:
I dunno, 5e bestow curse is iffy under the best of conditions because of concentration. In this case that concentration is going to hurt even more by conflicting with actual good spells

It's not a great option, but this is a sub-optimal build. I'm thinking of choosing disadvantage on Str or Dex and counting on one of your tanks to be a battlemaster and knock the enemy down a lot. Either that, or push him into one of the trenches you've dug with Mold Earth. Not great, but he's trying to play a combat focused game without dealing damage.

All the enchantment spells are great for this kind of build, also.

You can build a good wizard without any damage spells without problem, it wont be subpar.

Blindness is not concentration and lasts 1 minute. Very effective with a portent wiz

I'm playing a diviner wizard and our party is very offensively oriented so I never felt the need to take any damaging spells. The ability to replace lower level slots when casting divinations has been super handy. Using things like Contact Other Plane, Scry and Arcane Eye, we have a good idea of what we're up against. I often go into a dungeon having spent many of my spells before a fight even starts. I'm able to act as support with my remaining spells (web, Force Wall, Slow, Confusion) but, given the advantage my character has given to the party, I rarely need to do much. They clean house. The entire party thinks my character is the most dangerous PC in the group and I've never cast an offensive spell. But I think this might be DM and Adventure dependent.

Here is what I chose:

Blindness Deafness
Misty Step
Hold Person
Arcanist's Magic Aura
Detect Thoughts
Magic Mouth
Arcane Lock
Web
Notes: I use Arcane lock offensively. It's expensive but I use it to lock enemies in a room or cut off ways that our group might get flanked in a dungeon (if there's multiple exits.) If you key it to the group, they can use a door unhindered while the enemy needs to bypass a lock.

Detect thoughts can be very useful depending on the situation

3rd
Slow
Sending
Dispel Magic
Fly
Nondetection
Clairvoyance (This gets used often for scouting)
Counterspell
Bestow Curse (Ive never cast this one)
Remove Curse (I've actually had to cast this one quite a few times...the party keeps getting cursed)
Hypnotic Pattern (I hear it's good but I've never needed to cast it)

4th
Dimension Door (panic button but almost never use it)
Banishment
Locate Creature
Private Sanctum
Fabricate
Charm Monster
Arcane Eye
Confusion
Greater Invisibility
NOTES: FABRICATE has been incredibly useful. I took Jewlers tools and Carpentry tools. The things I've been able to do between adventures or to prep for adventures has been super useful. Taking random diamonds and turning them to diamond dust...or turning them into 1 single 5k diamond. Building Houses, making spell components, ink, paper etc... This might be dependent on your DM but, if you take it, make sure you take an appropriate tool proficiency to make it more useful.

Arcane Eye is very useful and trades down spell slots as a diviner wizard.

Notes:
Contact Other Plane can be pretty amazing depending on how you ask questions and how your DM tends to answer them. At one point, we were looking for an enemy in a city so I took a map, used quadrants and pointed to each quadrant and asked "are they in this part of the city?" until I narrowed it down. Your GM might not be so lenient. Nonetheless, with Portent, you can guarantee that you make your save. And it's a ritual so it doesn't take a slot

Telepathic Bond is AMAZING. (Lasts an hour, no concentration and it’s a ritual) but maybe not in the way you think. Yes, it's great for being able to communicate silently in a dungeon while being stealthy. Being able to communicate telepathically also helps with social situations: The Paladin is speaking to the king while the Wizard is feeding him important historical information to give him advantage is sweet.
BUT THE THING THAT MAKES IT SO GOOD IS The fact that the party can be split up and the DM doesn't have to cut from one group to the other because information from one group is easily passed to the other really speeds up game play and allows everyone to have input in any situation.

Force Wall...because it has so many uses: you need a wall? You need a ramp? You need to destroy a moving boat? need to cut off an escape route?

Seeming is nice. Sneak in to a castle before you assault it by being disguised. Also works nice as a panic button when the assault goes bad and you need to sneak out.

I made a dwarf wizard explorer with very few damaging spells. He could fight with weapons, however, so that helped!

I leaned into the whole archaeologist thing, so took Tenser's, Knock, Rope Trick, Feather Fall, Mage Hand, Read Language and divination spells. It was fun diving into spells that are often ignored.

A do-no-harm wizard? A bold choice, my friend. I think it could be a lot of fun!

An Abjurer wizard would be a pretty good place to start. I'm playing one now in my Eberron game, and he spends most of his time in combat Counterspelling, Dispelling, Absorbing, and otherwise blocking incoming spells and area damage. When he's not doing that, he's buffing his allies with Protection and Haste, or aggravating the enemy with Blindness and Slow. The Arcane Ward ability is awesome, especially at higher levels when you can extend it to your allies.

Banish and Polymorph are pretty good at removing brutes, and Sleep works pretty well for clearing out hordes (especially when you spend higher-level spell slots to cast it). And if you're gonna focus on battlefield control instead, you get some of the best spells in the game for that (Grease, Web, Wall of <whatever>, etc.) And why resort to combat at all, when you can Command, Charm, Compel, Confuse, and Dominate your enemies instead?

The more I think about this, the more I like the idea. Be sure to let us know how it turns out!

Minor Illusion and all the non-cantrip upscale versions, definitely. With the right DM, you can really get creative.

I've done the support wizard more than a few times. He hides from the combat and provides the PCs with buffs and utility tricks. A bit of battlefield control. It is fun for a while, but you usually end up grabbing a few blaster spells eventually.

I did not notice Blindness was non-concentration. Definitely taking that.

Supporter
Take a dip in cleric and then go full tank with an enchantment wizard.

Ralif Redhammer said:
Minor Illusion and all the non-cantrip upscale versions, definitely. With the right DM, you can really get creative.
Click to expand...


I'm probably going to go Illusionist, since then I can use Silent Image to create illusory monsters with sound, e.g. scare goblins off with an illusory owlbear.

Our current party composition is Barbarian, Monk, Ranger, Cleric, Wizard, and since IME Wizard single-target damage is pretty lame, relying on Grease, Slow, and Fear as my big AoE spells instead of damage might be doable.