ZEITGEIST The chronicles of Team Big-hearted And Determined (B.A.D.)

That is so amazingly cool!

As a DM, I'm glad I got this far. When I first read the encounter for Steelshaper, I had wondered if I would be fortunate enough to hover a train carriage 100 feet above a PC. I never thought I'd be so lucky to have that PC also wrapped tightly in a sheet of steel and that another PC would be stuck in the train carriage above. Truth be told, I'm not entirely vindictive, but Steelshaper on the other hand...

But this is of course a Pathfinder combat: Steelshaper would not get another turn. Angharad vomited fire from a distance, knocking Steelshaper out. His control over the hovering carriage quickly dissipated. As it fell, Lisandra swan dived out and teleported safely to the top of a nearby carriage. Angharad rolled a natural 18 on his reflex save, just managing to spin himself to where a window (rather than solid steel) would make contact with the ground. He was unharmed, and took the time to sit inside the carriage and light a cigar. John apprehended Steelshaper, with his lioness companion keeping his unconscious body pinned to the ground. Then, at the sound of guards approaching, Team BAD wrapped up Leone in the Absurdist Web and escaped with dimension doors and wild shapes. If they had searched the other carriage, they would have found a document detailing the Ob's research on the team and their combat tactics. Steelshaper and his crew were prepared, but not prepared enough.

With their druid able to hop through trees, the party thought it best to duck into Flint. Angharad cleared Delft's desk, and unraveled the web to produce Leone. After a moment, Grappa took control, looking carefully around the room before struggling with his speech. After gaining a little more control, he conversed with the party about his unhinged plan. The party, perhaps equally unhinged, agreed, keeping their moral concerns to themselves. After all was said, the party wrapped Leone's body up in the web. Lisandra apologised to Grappa in case he was gagged the next time he resumed consciousness. Angharad looked proud, happy that he provided a wanted man in dramatic and smug fashion. 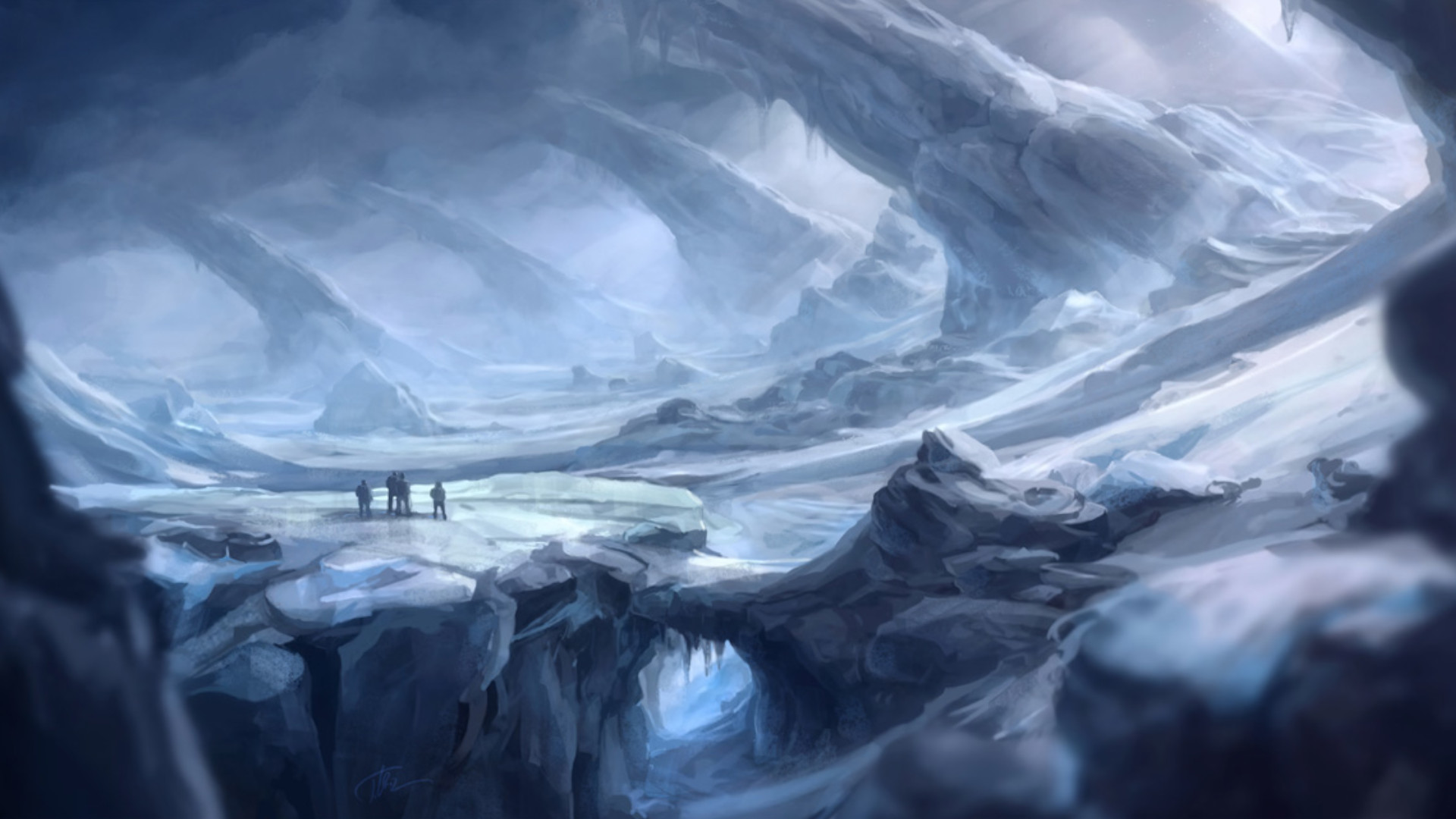 The party rested, equipped themselves, and teleported to the nearest tree to the glacier. From there, they followed a stream. Although small enough to hide from the giants, the party did not deviate from the stream, alerting the demonic deathbears. A very dangerous combat ensued. During which, the party demanded the location of the lich. A giant, addressing them as "lich-loving fucks" told them the lich was not to be spoken with. Instead, Team BAD were offered an indefinite position as miners. Predictably, negotiations were not fruitful. Although no PC died this combat, the party soon feared the martial prowess of giants. John stablised and healed one giant to question them. Realising the tables had turned, the giant answered every question the party had, hoping to live. He told them that the great Kangitche had allied with a powerfully wise clan of smallfolk known as "Obscurati" and two emissaries reside within the glacier. He told them of the Kangitche, the number of giants within the glacier, and a rough path to the lich. The party let him leave, and he did so with his regenerated deathbears, leaving his giant friend dead in the snow.

Then, after killing a glacier scout, the party made a bold decision: to rest. The party gained back their spells, but the giants will be aware their scouts never returned. The Kangitche sends for his Klokaiutin ('Sagespeaker') Dergek, a powerful wizard and advisor to the Kangitche. Unbeknownst to his leader, the sagespeaker seeks to dethrone his leader and assume control of the clan. He hopes to reap the profits of the Ob for himself. He hopes these intruders will slay his Kangitche, giving him a chance to rise to power.

The next morning, the party ascend the glacier. Naturally, they begin with the dragon tower. The party wizard spots an ancient book hiding high in the cast iron roost of the tower. She flies up, and spends 15 minutes reading it. The other members of Team BAD make a promise to never left the party book worm be the one to retrieve a book. Ella's quick skim of "How to Train your Dragon" reveals the forgotten origins and uses of the evil creatures. The beasts were pilfered from a strange plane of fire, one unfamiliar to the technologist, and raised in Lanjyr as demonic cavalry. She'd spend more time reading it, but she has a lich to locate and a party to apologise to.

Applause for the Penzance riff.

I have a few questions moving forward, regarding Reed Macbannin's curse. The book states that:

Plus, Macbannin points out that most of the leadership are ghosts, who will come back even if destroyed. He says that he’s prepared a curse that can stop one person from reincarnating or rejuvenating (though if asked why he can’t say, since a geas stops him from revealing that Stanfield is part of the conspiracy); which he thinks would work on Vicemi. He’s not quite sure what Nicodemus is, but knows this isn’t his first body.
Click to expand...


So, my initial reading of this is that Macbannin doesn't believe the curse will work on Nic. Is that true, and if so, why?

Secondly, my party may be interested in the mechanics of this curse. Their main theory at the moment is that the Ob's leadership is seeking to become immortal/invincible. They believe a rakshasa to be involved (just based on skyseer prophecy/info from the player's guide). Additionally, they think Stanfield has something to do with it. I think this distrust comes from Stanfield being a well-spoken politician who dodges pointed questions quite well. All in all, the party is invested in finding a method to prevent reincarnation/rejuvenation. So much so, that Angharad asked the frozen lich (in a session not yet recapped) if he had a way to do so. In the moment, I decided that would have fallen within the lich's specialty and told the player I'd message them the technique between sessions. I thought it could be the same curse that Macbannin has prepared. Does anyone have any advice for this situation?

Please note, all of this is post hoc justification. I hadn't considered the specifics until you asked.

It won't work on Nicodemus because he's a super-old ghost with lots of contingencies and metaphysical linkages to the members of the Obscurati. He is, by this point, sort of the avatar of the concept of 'wanting to fundamentally remake the world.' As long as the Ob are active, he'll be impossible to kill. (William Miller in adv 12 can thwart that, though.)

How would the curse work? Macbannin worked on Cauldron Hill, where the veil between the Waking and the Bleak Gate was very thin. The place had tons of witchoil, which can trap souls. So I figure Macbannin's curse just consumes the caster's essence in order to punt the victim's soul to Cauldron Hill, where they're tormented by all the other souls that have been trapped there and gone mad.

How could someone else pull it off? You'd need to have closely studied some large reservoir of witchoil, been metaphysically linked to it (such as by dying while being mayor overseeing the area), and then you'd have to sacrifice yourself.

You could possibly achieve something similar by destroying a ghost near witchoil, but undead souls are probably twisted in a way that makes them less likely to be caught by any small quantity, and the ghost council is tethered together, so normally you'd need to destroy the whole group at once and be by a large source of witchoil. Macbannin's curse is strong enough to rip Vicemi away from the council.

As for stopping a deva from reincarnating, the simplest option is probably just to have a large quantity of witchoil to trap his soul (something like a cup for each lifetime). Though who knows? That might very well be the thing that causes a deva to transform into a rakshasa.