Tam's sense of danger is intense. He temporarily ignores Thallok's inquiries and listens closer to the "voice" and tries to understand what is being "said".

Tam, when you listen closely, you can hear something breathing! As you look closely at the golden fixtures, you notice they seem to have a slight shimmer to them...

Tam, make a Will save and let me know what DC you hit.
For easy reference, your Will save is 1d20+8.

Tam, you can't figure out why, but something seems off... also, the breathing has stopped.

Respen & Vale both trail the others down the corridor. Respen is concerned about getting caught in similar fashion as the others before. And Vale’s toe hurts. Respen helps him as quickly as possible down to the room as the others are investigating the obelisk. He looks about, trying to ascertain the runes, the layout of the room, and what is actually going on.

The text of this post was cut, and appended to the post below, to maintain continuity; Tam and I cross-posted, and I figured it would make more sense to have the post for Respen occur AFTER Tam's comment.
Last edited: Apr 7, 2020

"Gentlemen. I can't put my finger on it but there ware voices and the sounds of breathing coming from this obelisk with the eyes."
Tam cautiously leans a little closer to try to hear the breathing again.
Nothing.

"No. I'm not hearing a thing, now. However, these runes...
I recognize them from somewhere, but they seem to be jumbled all around. It's all jibber-jabber. Hopefully, one of you will have better luck trying to figure it out."

Both obelisks (the black one, and the rune-covered one) radiate STRONG magic, not innately, but rather, they are enspelled somehow.

Both obelisks are cloaked in a powerful illusion spell of some sort. Your guess would be Major Image but you cannot be 100% certain about that.

You suspect that the illusions will disappear if touched, and that whatever the illusions are hiding, will be revealed at that point... which might not necessarily be a good thing.

You can also attempt to disbelieve the illusions (without touching them) by making a Will save.

This spell functions like silent image, except that sound, smell, and thermal illusions are included in the spell effect. While concentrating, you can move the image within the range.

This spell creates the visual illusion of an object, creature, or force, as visualized by you. The illusion does not create sound, smell, texture, or temperature. You can move the image within the limits of the size of the effect.
Focus

A bit of fleece.
Respen, you are still in the entryway with Dewydd and the others. Do you want to enter the room? 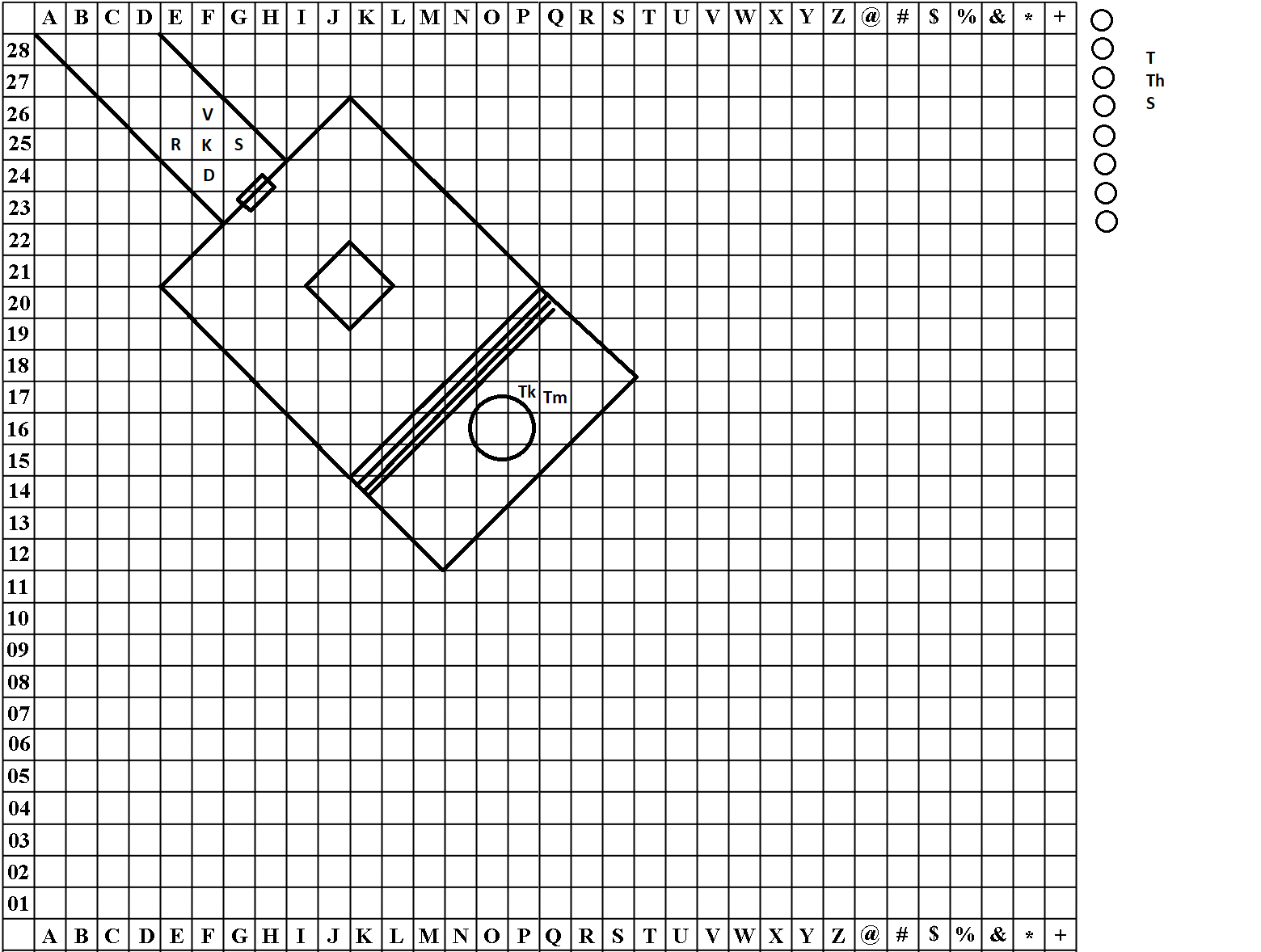 Respen:
“Wait!! They’re illusions. On or about the obelisks. Don’t touch just yet. I need to inspect them a moment further to see if I can figure out what they are.“
...
...
After a moment, Respen’s brow furrows. Calmly, he says in Common,”Tam, Thallok, you need to trust me; move quickly toward me now! Hack at your feet with your weapons. And MOVE!! “
Last edited: Apr 7, 2020

Tam looks at Respen like he'sout of his mind asking him to hack at his feet with his daggers that he still has in his hands...
"Hack at my What???"
But, Tam still moves away from the obelisk.

Respen, as you are warning the party that the obelisks are both covered by illusions, you begin to concentrate, focusing your willpower, in an attempt to disbelieve...

It takes only a moment for Respen to pierce the veil, and see the truth of the matter, but it is already too late. As the words were leaving his lips, the trap was sprung!

What Respen saw, and what the rest of the party now also sees, is that the black obelisk is not black at all, nor is it smooth. It is covered in runes, much like the other obelisk. It is actually a beige color, and there are 4 keys attached to it, one on each side. The runes are written in the Sphinx's native language.

The other obelisk, i.e., the obelisk that Thallok and Tam were looking at, is not an obelisk at all! It is a large, foul, gruesome looking creature, which resembles a column of living rock, with a large, single, central eye, gaping maw, and six tentacles, each of which is almost 80 feet long!

The other four tentacles had made it into the hallway, and had encircled Dewydd, Kleborn, and Sylvar once each. The last tentacle had begun to move toward Respen, but was still 15 feet distant from him!

Dewydd, Kleborn, and Sylvar are also surprised, as the tentacles tighten around them as well!

Respen and Vale are the only ones who are not currently ensnared... 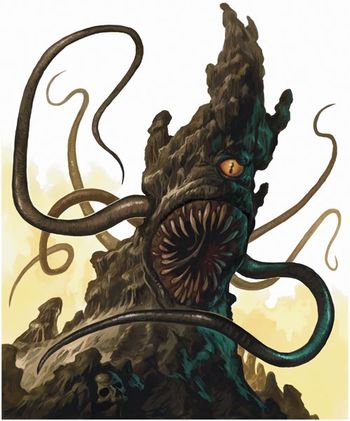 This is a small, young one. The one you are facing is ancient, and huge.

Tam, Dewydd, Kleborn, Sylvar, and Thallok are suddenly grabbed by the creature's tentacles! Tam, Sylvar, and Thallok feel a surge of nausea rip through their bodies; there is a tingling sensation, and it feels as if their muscles have turned to jelly! Thallok feels significantly weaker, and Tam and Sylvar feel almost incapacitated! Given their current states, it seems unlikely that they will ever get free!

Tam and Thallok, who were right next to the creature, are immediately drawn to the maw for a nasty bite! The foul creature can only bite one victim per round, so it chooses the biggest threat: Thallok!

It's an easy thing to stuff the Orc into its mouth, but another thing entirely to rend his flesh; it's like chewing on a rock! Despite his weakened condition, Thallok's thick, briny skin saves him from serious injury!

Tam tries to wriggle free, but the creature's grip is too tight!

DEWYDD: Make a STR check, DC 28! If you succeed, state your action!

KLEBORN: Make a STR check, DC 28! If you succeed, state your action!

Respen:
Respen speak two Draconic syllables, causing his actions to radically speed up. The spell is bastardized, a short version of another spell, in this case only lasting a few seconds. Respen is hopefully that the action is effective. In a quick breath he casts another spell, disappearing from view. He attacks the tentacle holding Dewydd in an attempt to sunder it, releasing Dewydd from its grasp.
Last edited: Apr 24, 2020

As they march Ebony pokes him. "What's wrong."
Duncan replies. "You've seen these guys fight. Whatever is up there I'm sure they can handle it. And if they can't handle it, what in the 9 realms are we supposed to do about it? We're in over our heads in here, and every time we engage the temples guardians just gives us another chance to prove it."
Last edited: Apr 22, 2020

Travis says, "You know that we can both breathe FIRE now, correct? Come on, boss! Let us have a chance to prove ourselves!"

Lenny nods in agreement, a wry grin spreading across his face.

Respen strikes the tentacle that is holding Dewydd, hitting it at just the right angle! The blade erupts in flame as it makes contact with the tentacle, and the red hot blade slices through the rubbery flesh like a hot knife through butter! The tentacle immediately goes limp, and releases Dewydd!

DEWYDD: It's your turn! What do you do?

"That was uncomfortable,"
I growl through clenched teeth before adding with a nod, "You have my thanks, Respen." Turning my attention to the roper, I grin and state, "Allow me to return the favor!" as I charge it. Touching down briefly, I push off the floor and leap through the air, bringing my sword down in an overhead strike.

Tam, fully cognizant of the deadly peril he and his mates are in, and the extreme pain of being squeezed by these tentacles, can't help but wonder if this is what it's like to be squeezed by a large constrictor, like a python.
If he could get in enough breath, he'd be chuckling right now; but, under the circumstances...

Although Dewydd makes four swipes at the gruesome monster, only three of them land; the reason is because the fourth and final attack did not take into account the position of the roper's body, or rather, the lack of position. The blow lands where the roper SHOULD have been; but after the third hit, which cleaved the beast in twain, what remained of the body fell away, so that the fourth blow struck naught but air. ~If I was going to miss,~ Dewydd muses to himself, ~I'm glad that this was the reason for it.~

THE ROPER IS DEAD! Its tentacles go slack, releasing all those who were within its grasp! Combat has ended almost as quickly as it had begun! EVERYONE: WHAT DO YOU DO?