Staff member
Many years ago, we had a border collie so smart, she figured out how to throw things down stairs so she could play catch/fetch without moving too far. She could even do that with rope bones, sending them down end over end like a slinky.

Tonight, C. Merle came up with her own version of throwing things down for entertainment purposes.

I was sitting on the floor in the master suite, back against the bed, folding the family laundry, when Dad brought the dogs in from a romp in the yard, C. Merle, squeaky snowman toy in jaws, jumped on the bed to chill. She settled in right behind me. Then she bopped me on the head with a paw, following that with dropping the snowman over my shoulder into my lap. I flipped it back over my head, and I could tell she caught it.

She then smacked me in the cheek with the wet end and again, released it over my shoulder into my lap. I threw it again. She plopped it back on me from above and behind, sometimes with a paw whack to my head or shoulders, sometimes without. Once with an ear slurp.

In fact, this game entertained her for a good ten minutes or so, significantly slowing my towel folding, only ending the game when Dad called the dogs to dinner.

Not to be out-cuted, later tonight, J. Merle decided to rear up for some serious hugging after I had MY dinner. She hasn’t done that in months,

Staff member
Cone and protective vest, waiting for the vet (again!) The vest is to stop him scratching where he had the snip; the cone is to stop him chewing it... 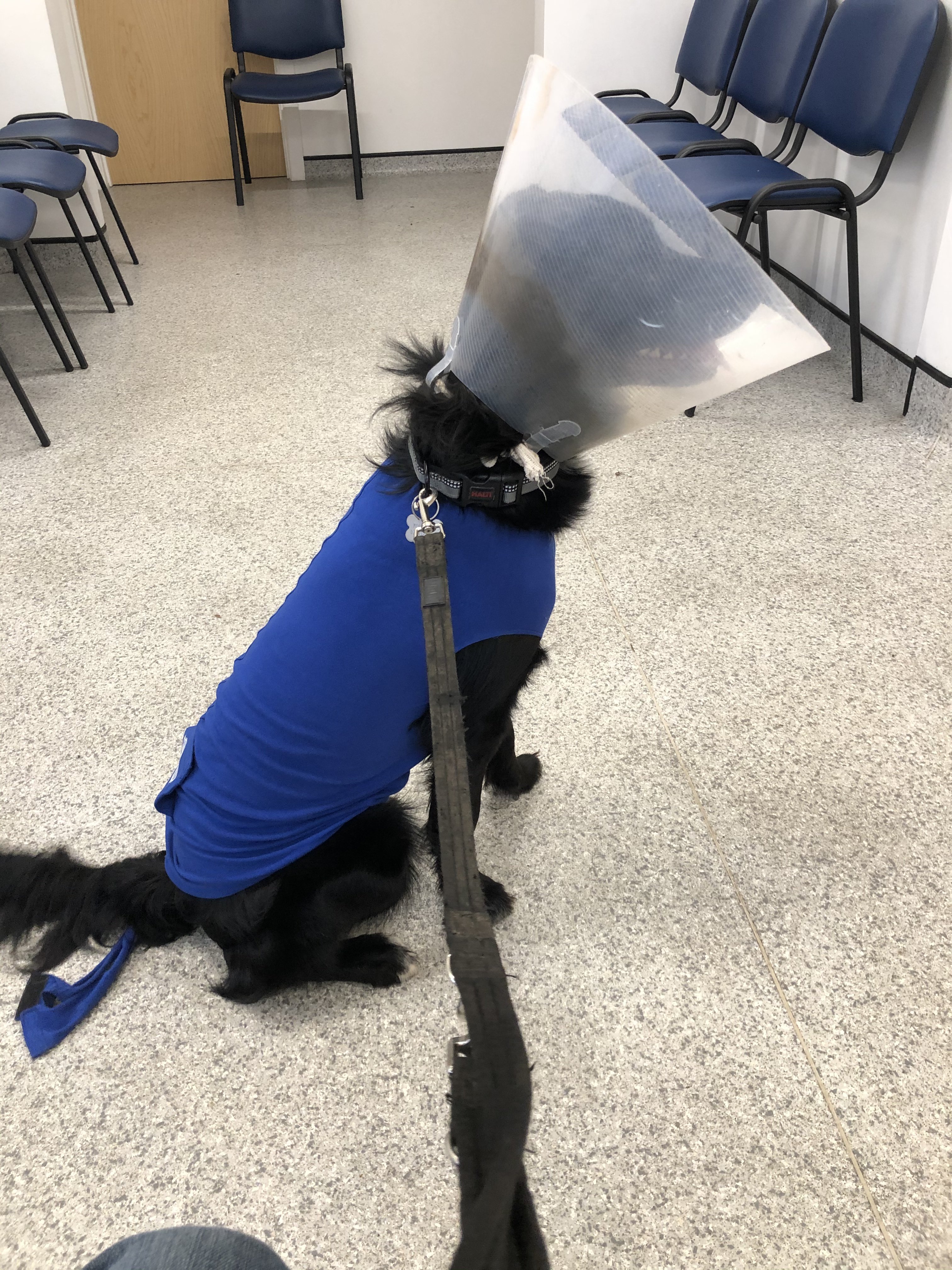 Morrus said:
Cone and protective vest, waiting for the vet (again!) The vest is to stop him scratching where he had the snip; the cone is to stop him chewing it...

I always think of Elizabethan collars when I see those cones...

Dannyalcatraz said:
I always think of Elizabethan collars when I see those cones...
Click to expand...

You can get ones that basically look like them. Oddly, the actually name of them is Elizabethan collar. 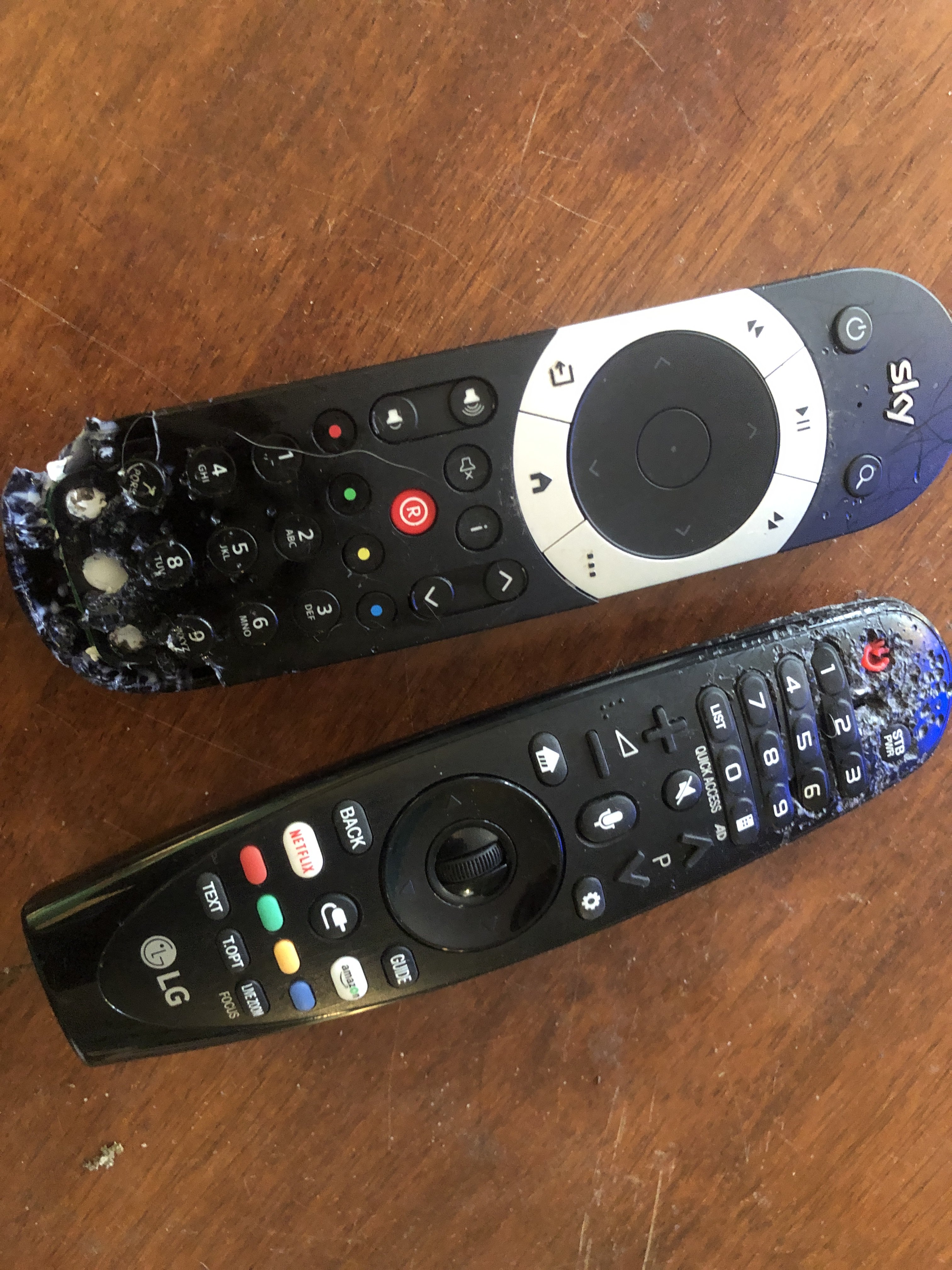 My faithful friend Tintin on the train to the north of Sweden. A fifteen hour trip, no accidents. Got off the train for a while halfway, only thing she wanted to do was play with her ball. 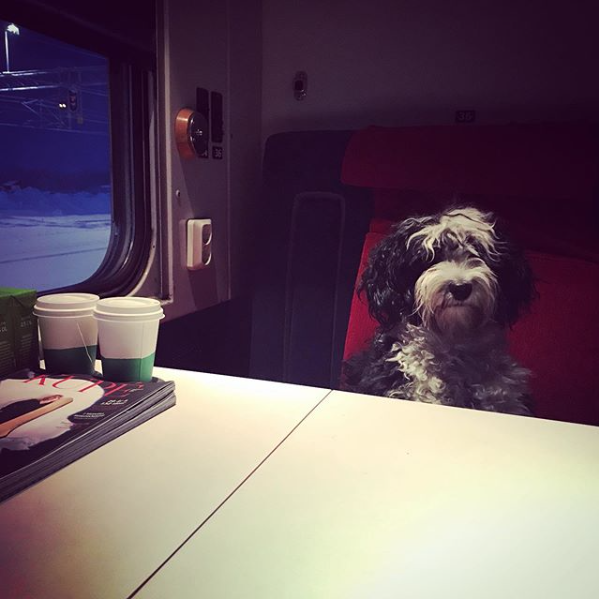 Our younger dog has done likewise at least once, though she vastly prefers cardboard & paper products.

Contrast with our older dog, who in her puppy days chewed up one corner of my parents’ bedroom tv stand.

This is one of my dogs, Ginger. If the dress didn’t give it away, she’s spoiled AF. 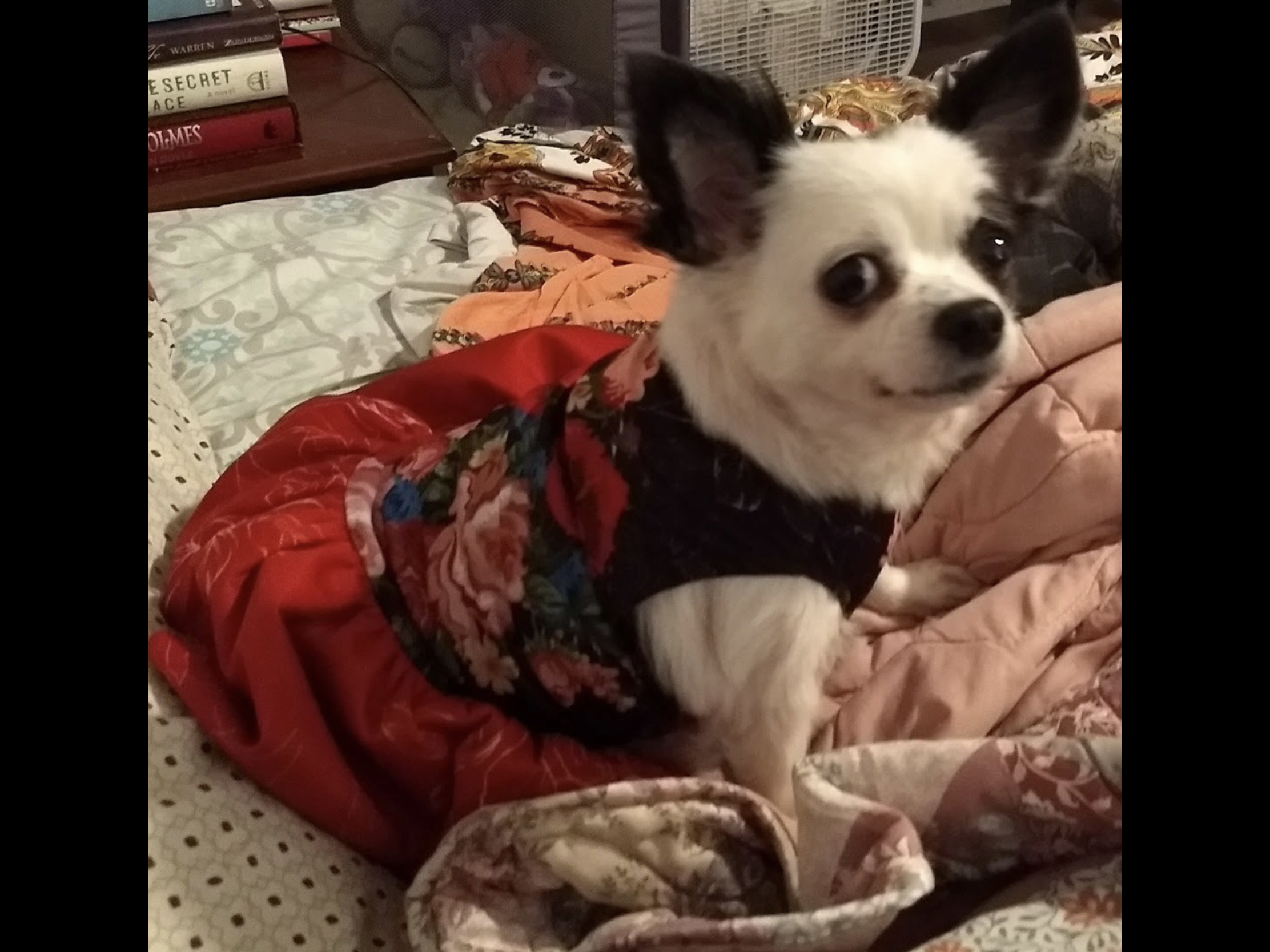 Staff member
My Barber was telling me the other day that his bulldog destroyed all the plastic parts of his handgun.

(Thankfully, the Gun wasn’t loaded at the time...)

Staff member
Hudson on his throne! 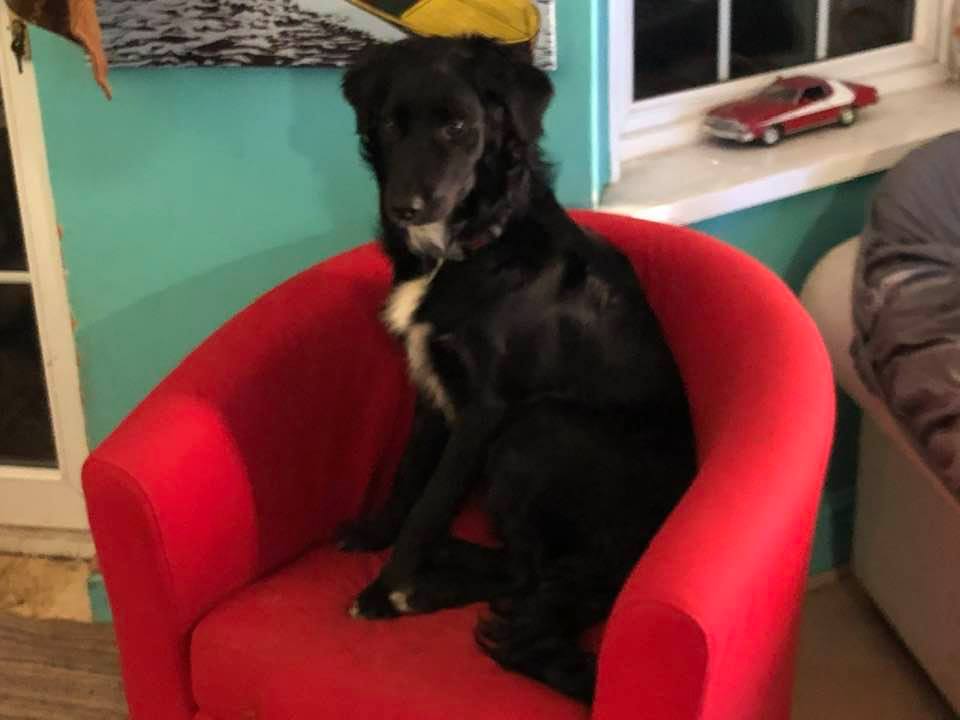 Staff member
Is it love? 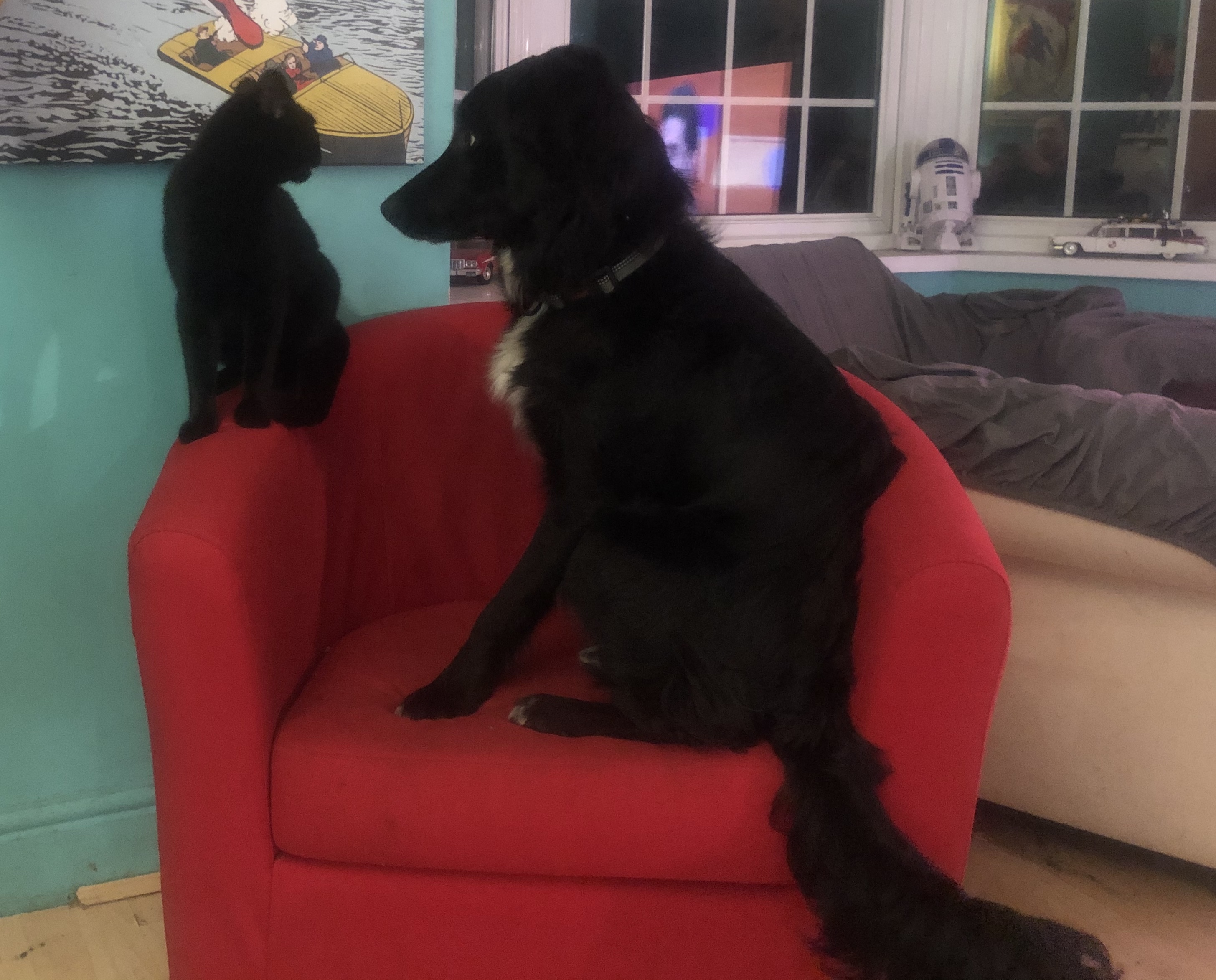 Either that, or someone is about to get smacked on the snoot!

I have no dogs, but an artist friend of mine has apparently had some great success lately because of her 'Puppettes,' which I think are supposed to be sort of like the Rockettes but with anthropomorphic dogs.

Staff member
The old dog invented a new game tonight; don’t know what to call it.

She started by standing on or near one toy about 7’ from me, and when I told her to bring it, she’d just start barking and wagging until she’d swat it or pick it up. But she wouldn’t bring it more than a couple inches in my direction. Then she’d bark some more.

Inevitably, as the barking continued, I’d call ger over to calm her. She would come when called, quietly smiling & wagging...sans toy. As soon as she’d get to me, I’d give her a quick ear scratch and send her after another (identical) toy on the other side of the room.

She’d gleefully trot over, stand on or near the toy, and begin barking at me again.

This pattern continued for @15 minutes, with the dog tracking a V back and forth between the toys and my position, always smiling & wagging...never bringing me a toy.

Eventually, she picked up the first one and laid down about 3’ from me, facing the other way, to nibble upon & cuddle with her toy.

Staff member
In a way, I exist because of a dog. My Mom’s very Lassie-like collie, Darren, to be precise.

In their teens, my parents lived 1 house and 1 street apart, so they knew each other tangentially from around the neighborhood. Dad’s little sister went to check my Mom out to see if she and Dad should actually meet. They did, and the rest is history.

Darren’s part? He LOVED Dad. Every time Dad walked by or my folks’ paths crossed in the streets, Darren raised a joyous ruckus, a unique vocalization. He was part matchmaker, part proximity alert, part chaperone. No other guy my Mom dated got Darren’s seal of approval.

FWIW, Dad’s still got that “animal magnetism”. Mom has had 1-3 border collies as pets since she became aware of them in 1986, and Dad’s been the #1 family member for all of them. Yeah, he feeds them most often, but I get that duty as well. And I’m the primary dog walker and fun time person.

But Dad remains first in their hearts.

Dannyalcatraz said:
In a way, I exist because of a dog.
Click to expand...

Such a sweet story!