Staff member
And this is a nice picture of JBW & J. Merle (as a young’un) stalking a soccer ball, soon to be kicked. 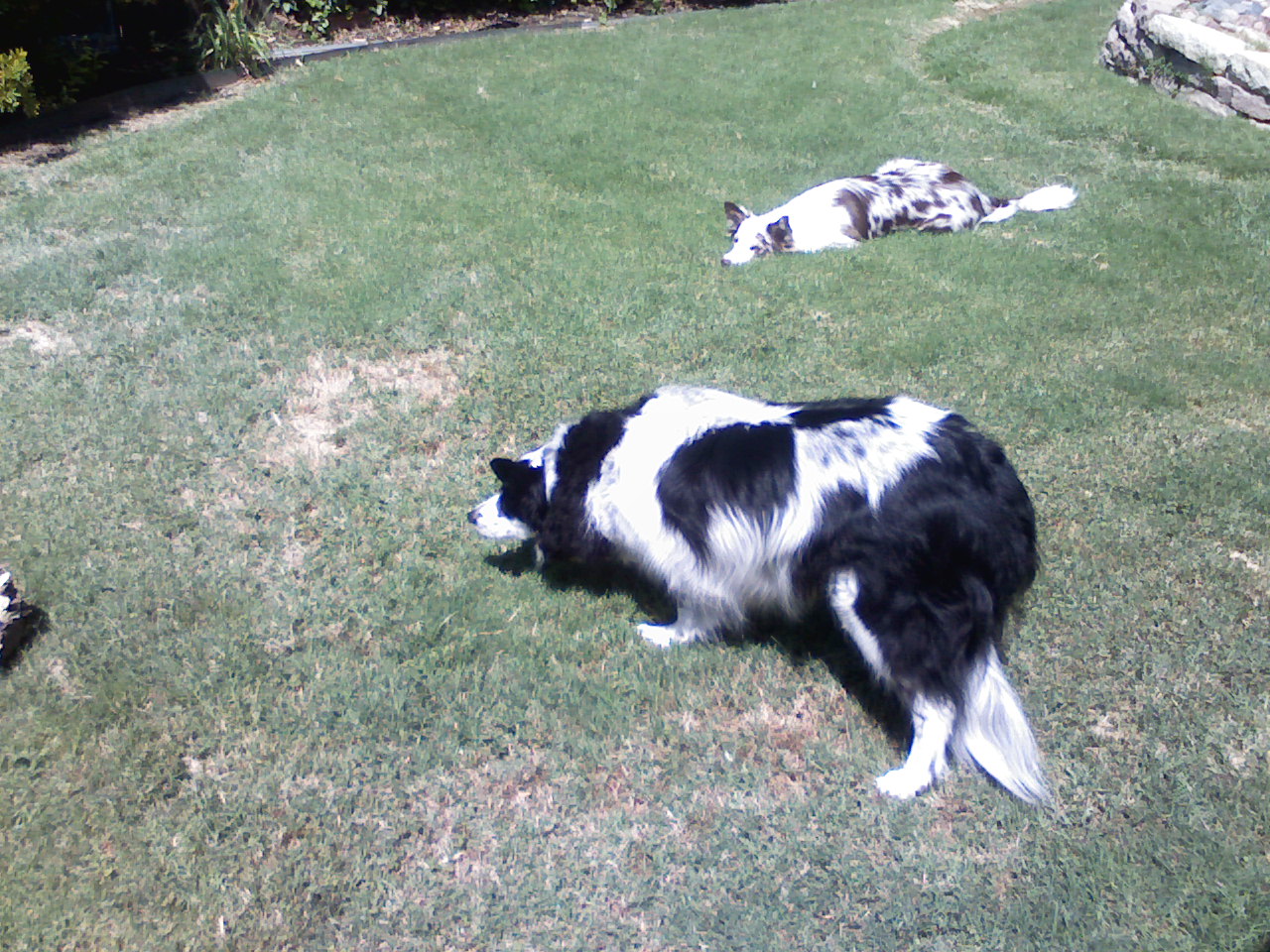 Staff member
Did groomies tonight. I currently have as much fur on me as they do.

J. Merle lurves being brushed. By the end of the process, there’s this melted canine draped over my legs, and at least one of my knees will be drool-covered.

C. Merle is more ambivalent. She has to take periodic breaks for short games of catch. But at job’s end, she is often sitting up & leaning on my leg, usually waving a paw in search of a shake. Tonight, she added a nibble & lick to my left ear.

Baked a salmon yesterday and the gate had to go up. We did share a little with her when we were done eating. We're not cruel; I mean, look at that face! 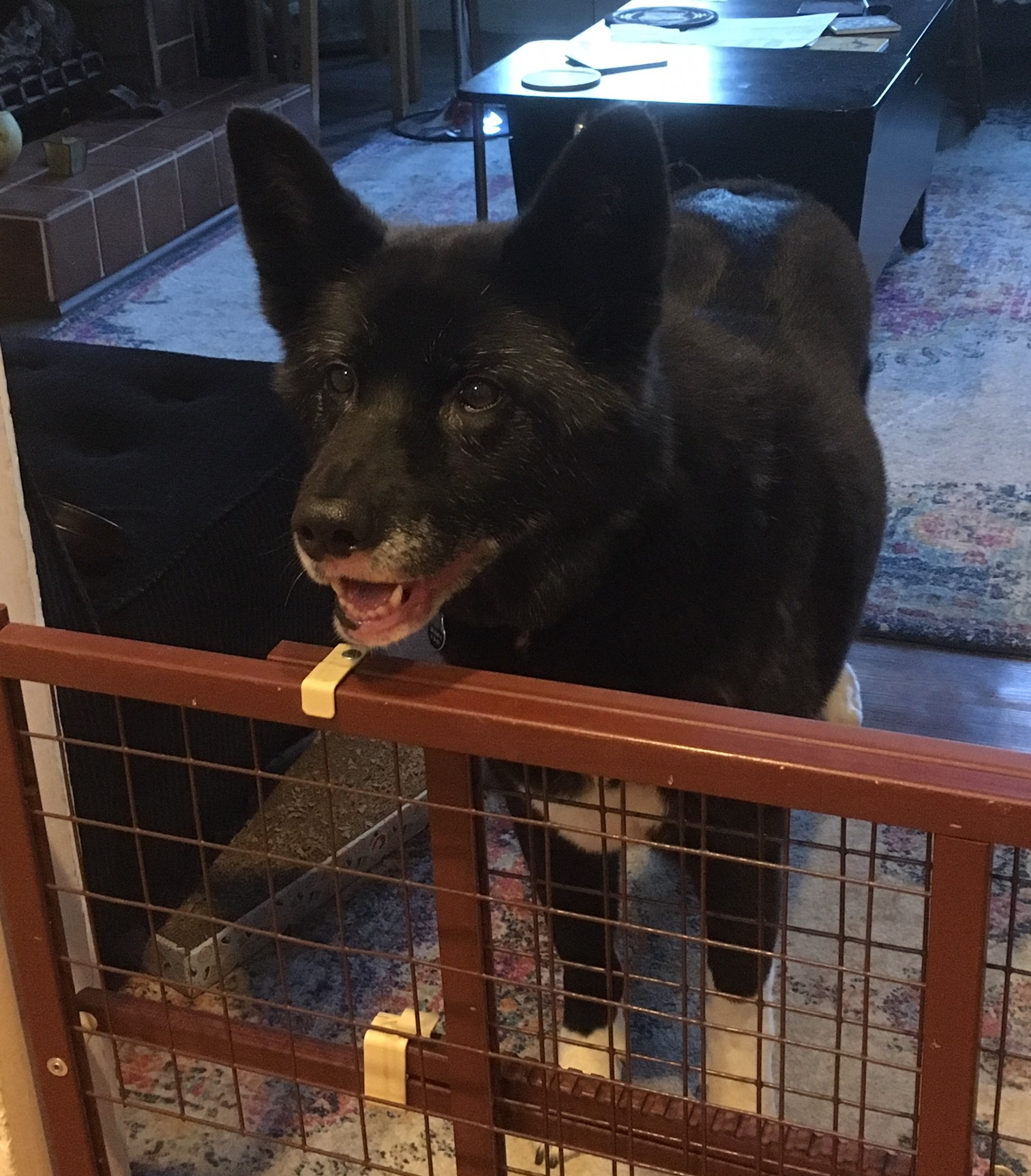 Staff member
So cute! What is she?

Eve is a 14-year old Akita/Shepherd mix we got from the shelter 12 years ago. She's in pretty good shape for her age - just a little arthritis, and we suspect deafness (it's honestly hard to tell what with the stubbornness).


Dannyalcatraz said:
So cute! What is she?
Click to expand... 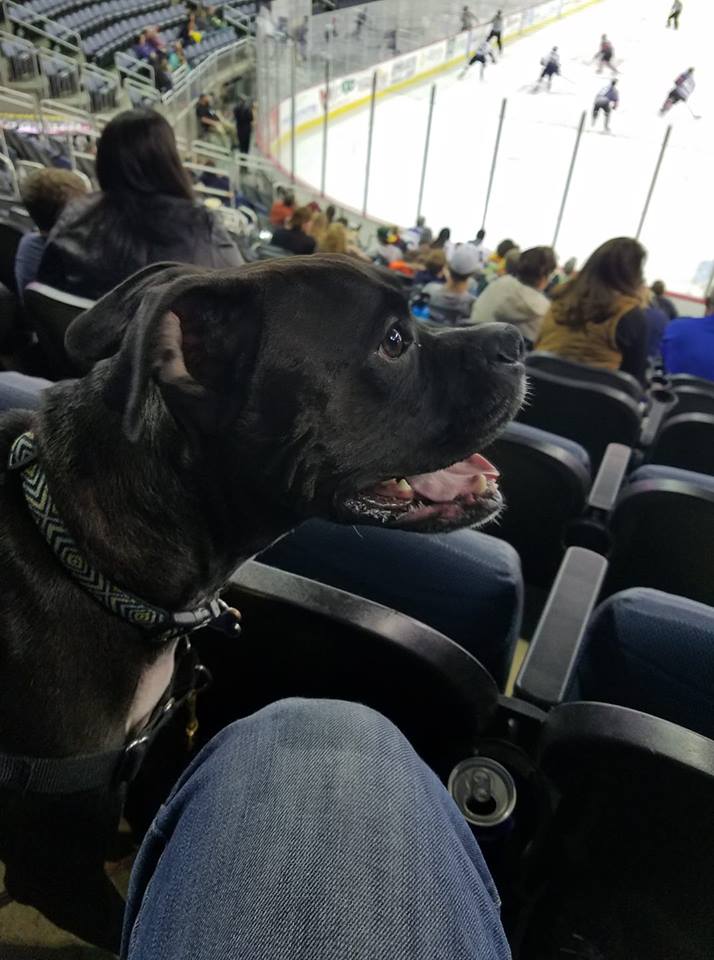 This sweet, old gal is Kay-Kay. Last November, we adopted this senior from a shelter, where she was in danger of being euthanized. She wants to get as close to you as she can (even if it means crawling behind you). She snores loudly and never stops licking your face. 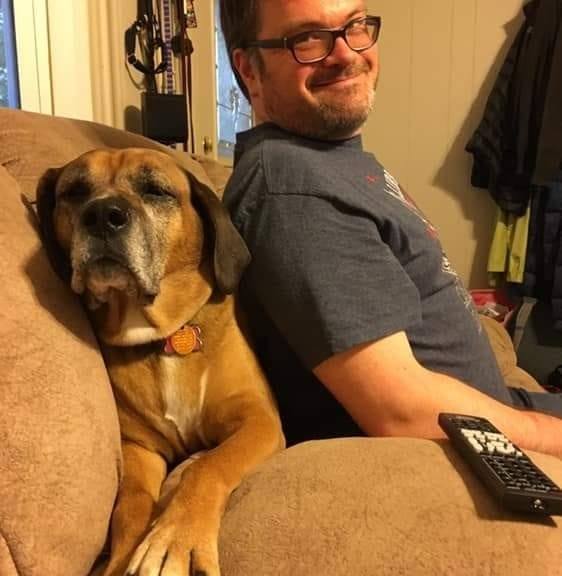 Staff member
In our house, C. Merle would be sitting on you instead.

I don’t mean lying across you like normal dogs. I mean, trying to plant her butt on your lap or shoulder.

Now, imagine it is a mastiff that weighs more than the veterinarian trying to treat it.

Sadie is our Border Collie / Blue Heeler mix, seen here amidst a pile of things that go squeak. Staff member
A few years ago, I was helping Mom with some accounting issues with Dad’s business in our home office. I was lying in the floor, using a laptop because there was paperwork all over the desk.

We finally resolved the issues @1:30AM, and were in the process of tidying up. I had just handed Mom the laptop, and rolled over on my back when C. Merle, a.k.a. “Helper”, a.k.a. the “Junior Junior accounting assistant”* came through and took a seat. Mom thought it photo worthy. 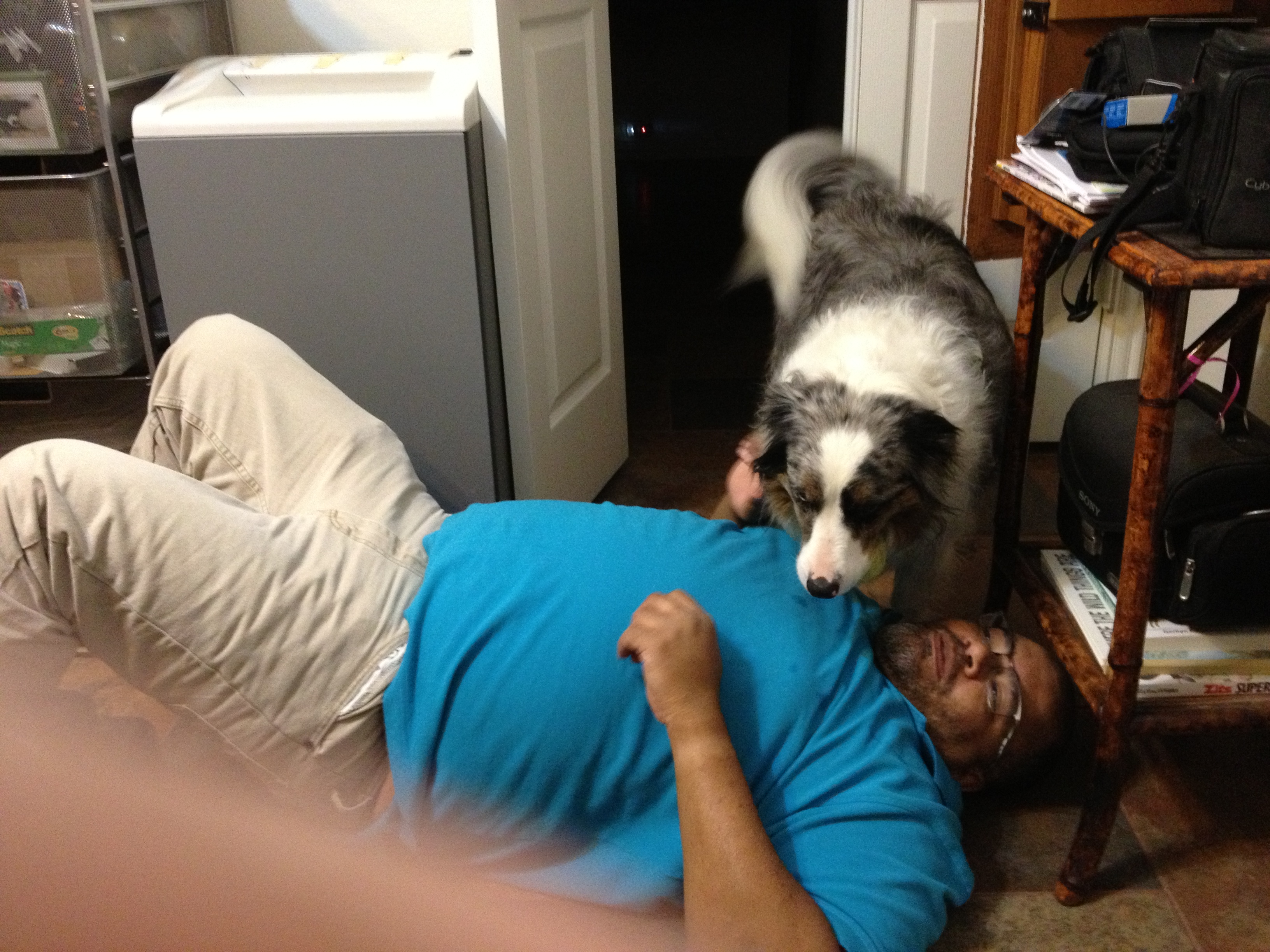 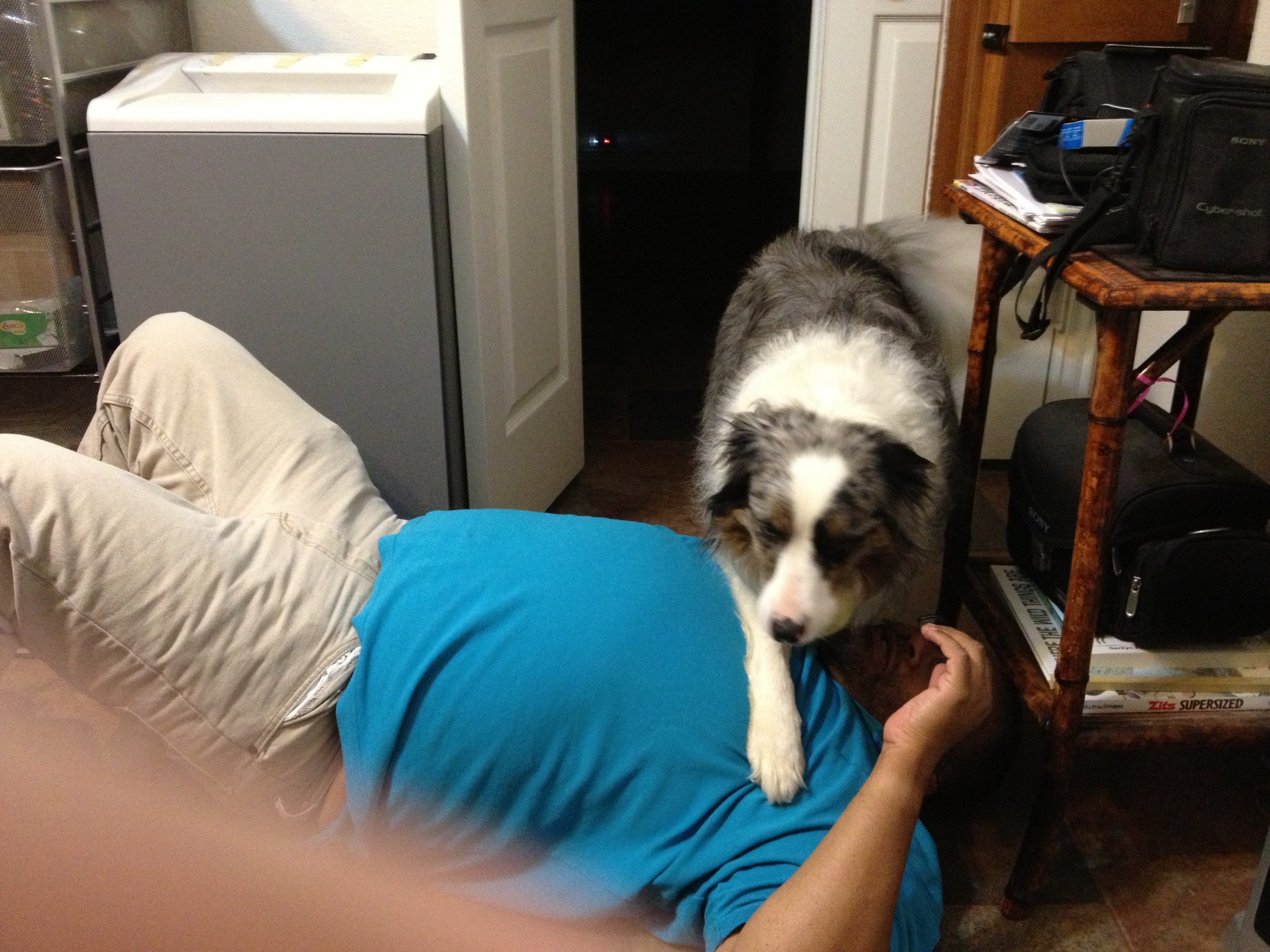 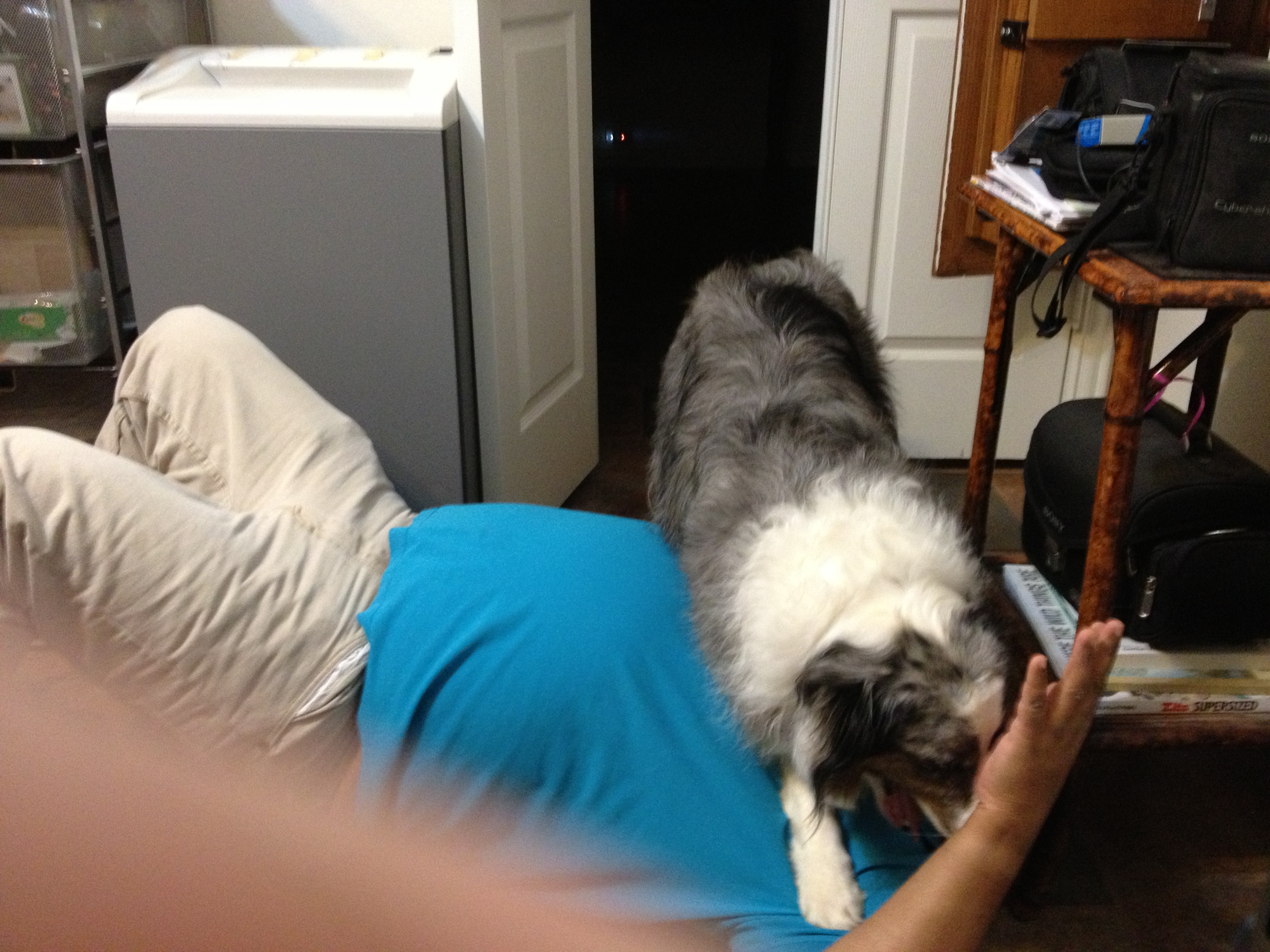 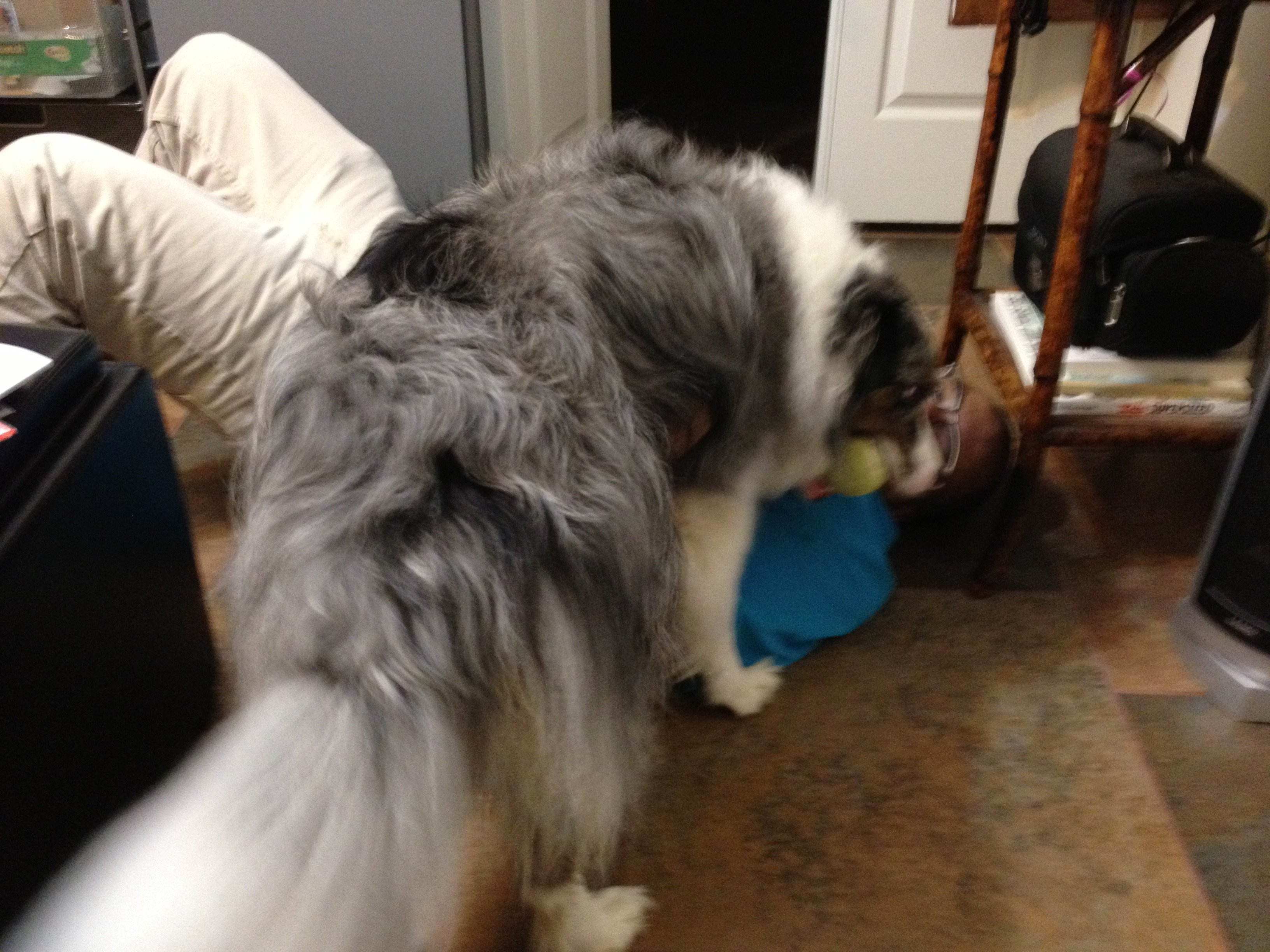 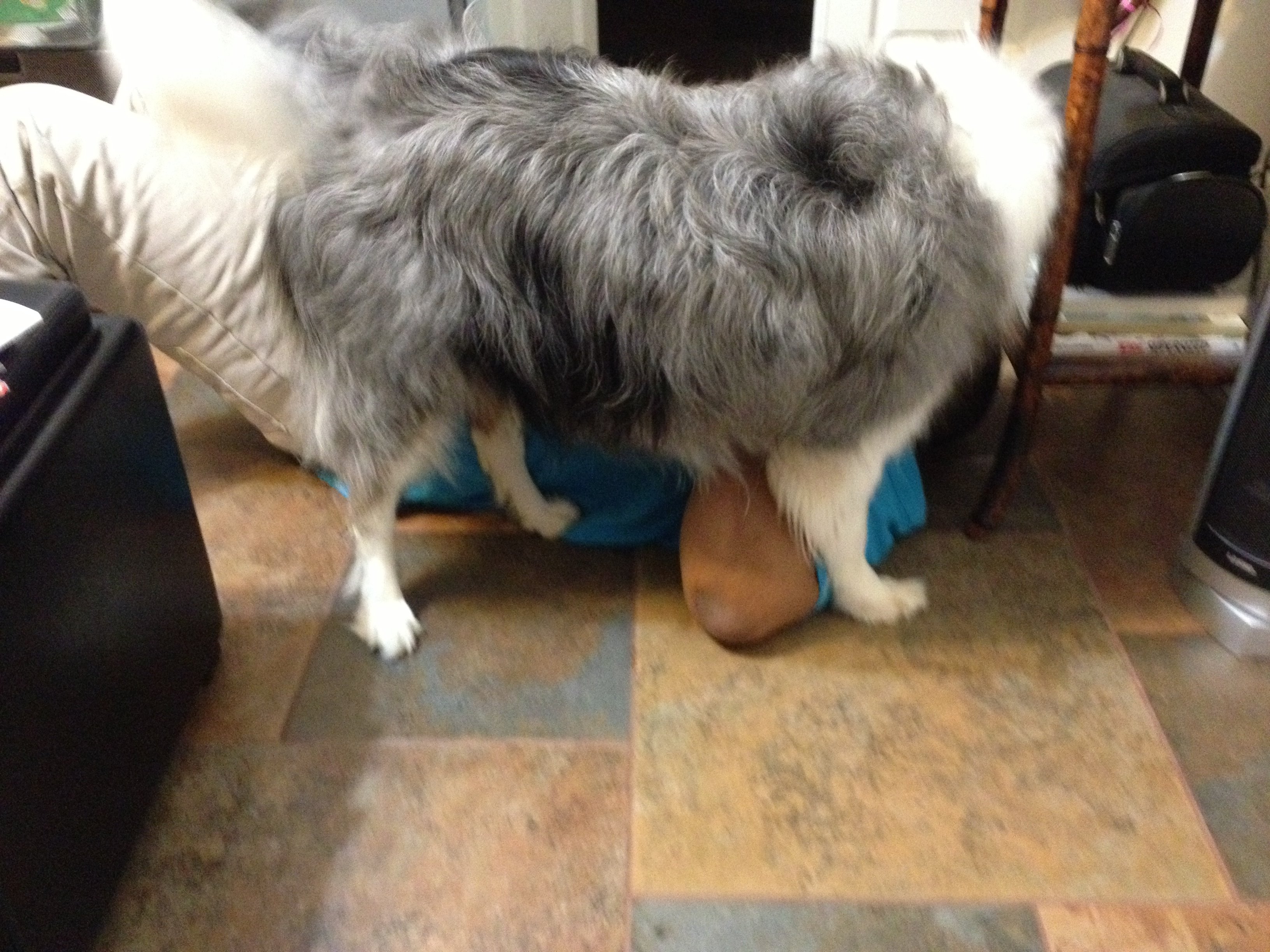 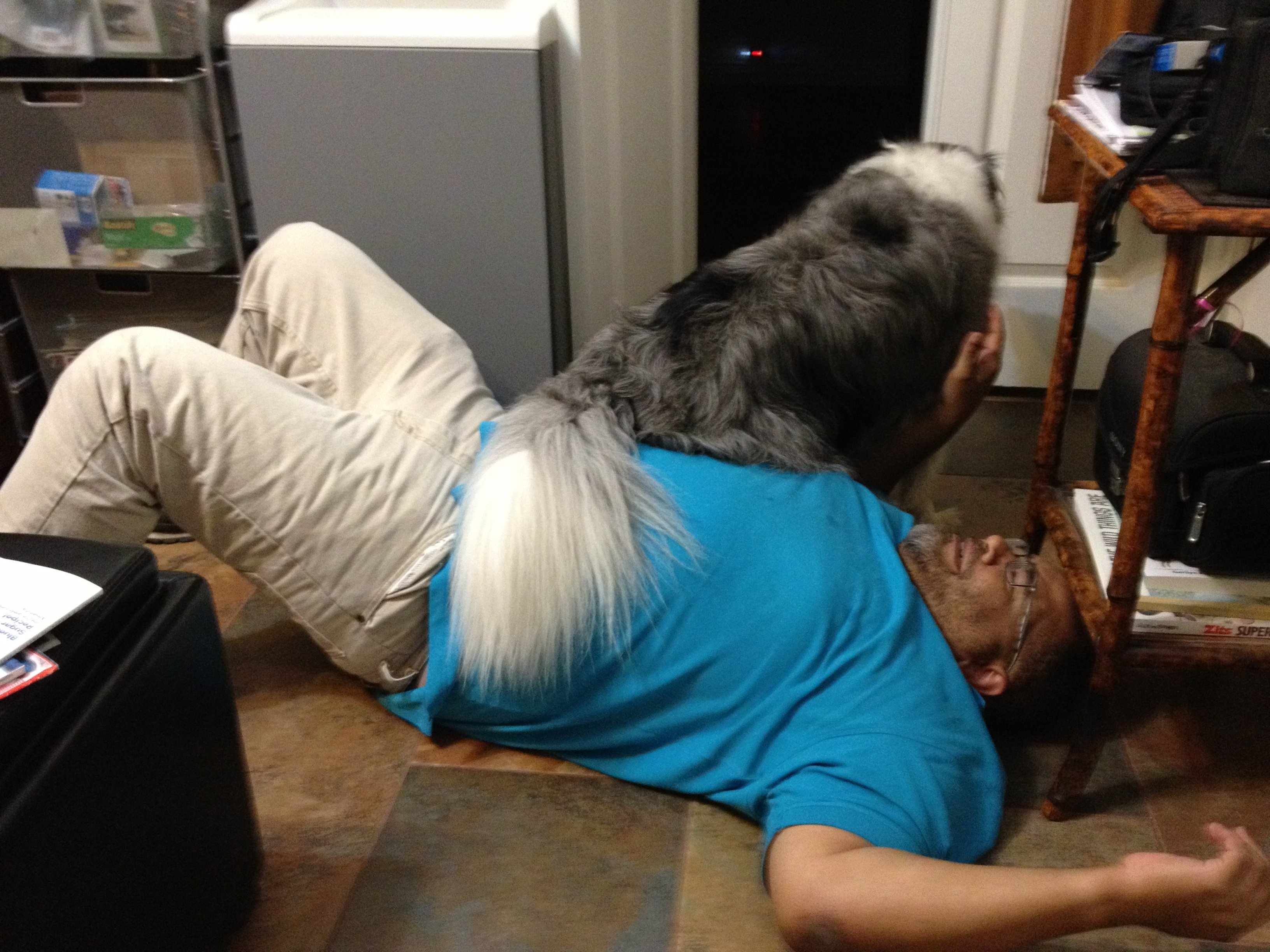 Staff member
Nothing like having a dog on your head.

Staff member
Does keep you warm, no question.

Staff member
My favorite picture of J. Merle. She’s a bit camera shy, so getting a good picture of her can be a challenge. In fact, in this picture, she saw me raise my iPhone and started trotting towards the door to the house to hide inside. 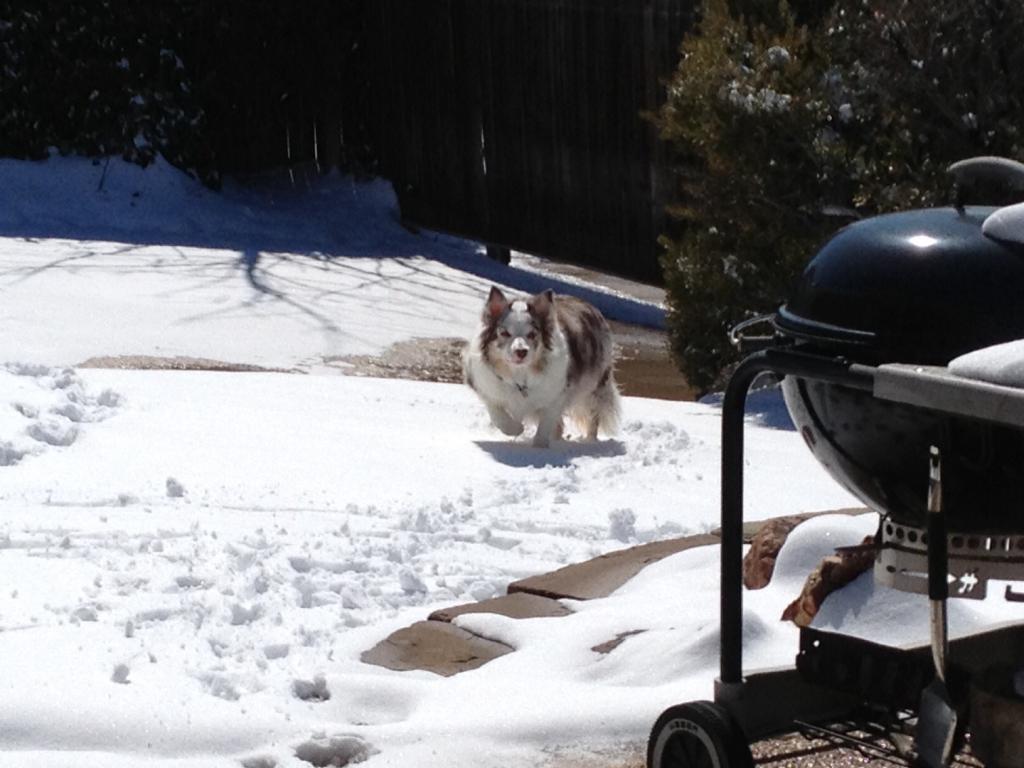 Staff member
My dogs reminded me of an important hobby: entertaining them. (Actually, that’s the night I was cleaning out their plunder bucket, but they insisted on helping...) 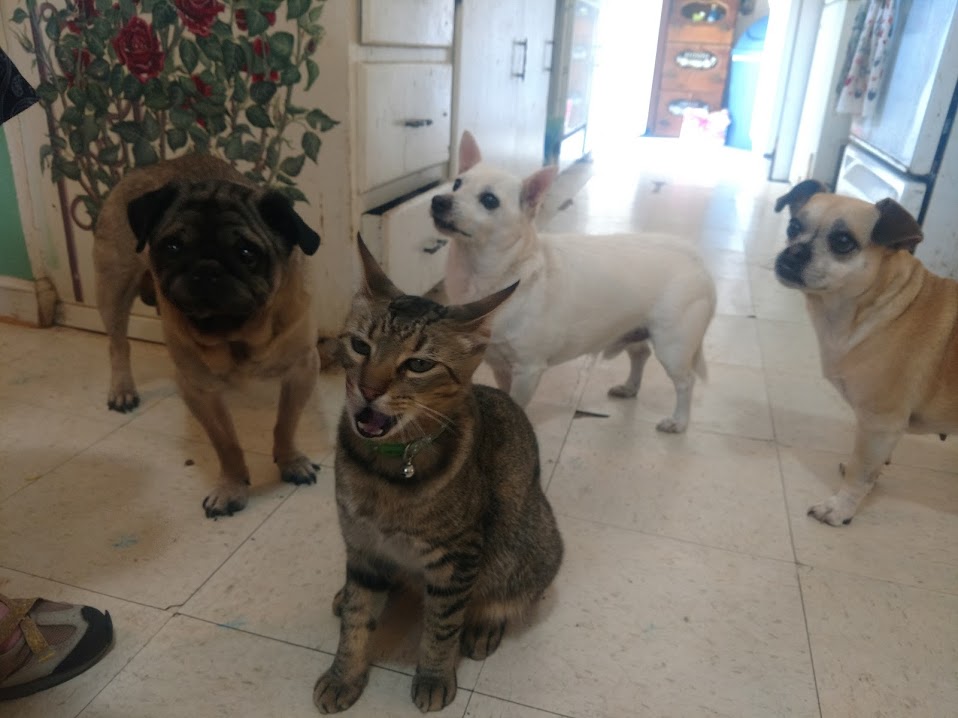 This is our pack, cat included.

The pug is Foo, who I delivered almost 17 years ago. The pug in my profile pic isn't him; that's Maggie, who is long gone, but who was the dog who made me fall in love with pugs. They're amazing dogs, despite the many, many issues they have. Foo's dad, Buddha, lived to the unbelievable age of 26!! When I took in Buddha and Ruby (Foo's momma), it was from a friend who couldn't keep them anymore, and Ruby was pregnant. The previous owner found new homes for the other pups, but I kept Foo.

The white dog in the middle is Rocky, also known as Rockstar. He is a rat terrier and is a silly grumpstar. He loves to grr at people, but it's his game. He's not actually aggressive at all, and he loves both dogs and humans.

The other dog is our newest, Angel. She's a pug/terrier/chihuahua mix. She's super sweet, but loves to bark more than we love to hear her bark. She's our only female at the moment. She's a rescue taken from a puppy mill.

The cat is Spock. He was a feral kitten rescued from the park by a friend, who asked if we would take him in. We did, and he's grown into a fine ratter. The other day I really made him upset by stealing a woodpecker he'd caught (!) from him and releasing it. Since Angel raised him, he kind of thinks he's a dog. He is Foo's best friend and loves to mess with him when we're all in bed.

Wrong yard for dogs we signed up for $250 yearly donations for the SPCA where we got our moggies from.

Also rescued stray dog and donated to Dog Rescue another local charity. Dog was so friendly dog control took her without a leash.

Staff member
Judging from the bandages, cough drop wrappers and the top seal from my newly opened deodorant found on the floor the past 2 days, it seems as if C. Merle has figured out how to open the step-lid trash can in my bathroom.

So far, she’s not sick, but we’re keeping an eye on her. I may have to get a taller can, too.