Tyranny of Dragons Getting Republished in Combined Anniversary Volume

Click here to view article text
So, WotC is re-releasing Hoard of the Dragon Queen and Rise of Tiamat in a combined volume, with a special cover, re-edited based on feedback, on October 22nd. 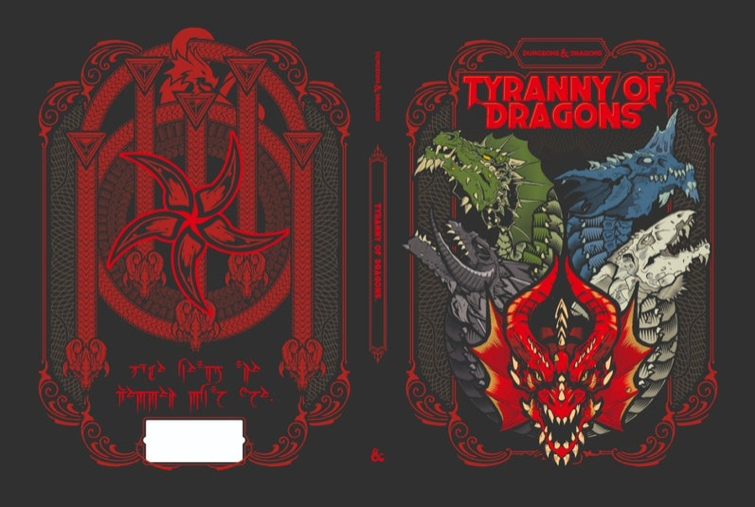 From ComicBook.com -- "The new Tyranny of Dragons volume will update the adventures by incorporating feedback to smooth out the curve for new players, while adding resources previously only available online and adding never-before-seen concept art. In addition, Tyranny of Dragons will have a new cover designed by Hydro74, depicting Tiamat in all of her five-headed glory."

The adventures are known as being very tough - it sounds like the challenge is being lowered a little.
Last edited by a moderator: Aug 13, 2019

I loved running this adventure despite all the work it took to organize. Some serious highlights for us in terms of "best gaming moments". Despite all the structural issues I have super fond memories of playing this adventure. I would be tempted to buy it again with new cover art, but only if the "reworked" material went beyond errata and redoing the intro. The intro was pretty ing metal and we loved it. I guess some players think "nah, let's just run away" but for us it was the foundation of a pretty great campaign.

Not to say we didn't have issues with the adventure. The most difficult was simply "campaign fatigue", after a year and a half we were looking to do other kinds of adventures right when characters were acquiring some of their most interesting abilities. But that was on me/us, we could just as easily have turned the Council adventures into deeper stories.

If I were to see an ideal re-release, it would correct the mechanical imbalances (CRs, too-powerful magic items, etc) and more development of the side adventures so that DMs can flesh them out a bit more. It felt like the end-run was going by too fast, so an explicit story arc that was stretched out over several campaign years might make that feel a bit better.

For me to buy and run a re-release, I would need a whole new group of players who had never played it before. Hydro74's artwork is what puts it on the fence for me... maybe, just maybe I would buy it as a collectible for future re-reading. But not likely as something to replay.
M

I DMed this campaign (though I heavily heavily modified "Rise of Tiamat"), and I'm glad they're re-releasing it. I wonder how much they'll change.

"Hoard of the Dragon Queen", basically, is a good adventure. It's very difficult in parts, and very linear, but it's just plain fun -- it has so many great setpieces!

"Rise of Tiamat", OTOH, was a disappointment. The central idea that the heroes are hobnobbing with royalty and making allegiances while going place to place to fight Tiamat is exciting. But all the individual chapters are so random and uninteresting. I ended up only using one of them (the Green Dragon area) and ditching the rest.

Also, a major problem of the adventure, particularly compared to the other D&D5e campaigns which are so beautifully sandboxy and open, is that it's written on the assumption that it's impossible for the heroes to stop Tiamat from being raised. All the "sorry Mario, the princess is in another castle" scenes whenever they're about to collect a Dragon Mask are so annoying. It'd have been much more fun if it left open the possibility of stopping Tiamat from being raised.
Last edited by a moderator: Jul 23, 2019

MonsterEnvy said:
To be honest there was never a need for Intermediate Deities, 1e did not even have them.
Click to expand...

True, though I did like the added granularity myself.
M

They really should totally rewrite both adventures. The biggest problem with the adventure path is that you never, ever get to feel that the Cult is attackign the Realms in full force. The first book is a long chase after an underwhelming treasure. The second book... Well, all the major power groups in the Realms are sitting around and letting their involvement in a major regional war (with possible global consequences) depend on the success of a bunch of newbie adventurers in doing a number of quests which do not change anything about the overall situation. Plus the main quests are all 'find this magical doodad to stop Tiamat from rising -hah, fooled ya!'-variations, just busy work to get the PCs up to the necessary level for the final dungeon run. These adventures could become classics, but need a complete overhaul before they work as they should.
W

Won’t be getting it if it’s just chapter 1 rewrite. That level of repair I can do.

IMO in the same way that TSR released the “supermodule” Against the Giants combining GDQ, which became a must have, they should release a super duper module “War on the Sword Coast” combining ToD & SKT as a 4th-18th+ module with a write up as what changes to make in LMoP to foreshadow the War (for those who want to start at level 1) and a major side bar as to how to properly integrate PoA.

I think the modules all lack a bit of XP and have filler bits. If they were wrapped together this wouldn’t be the case.

The evil guys backstory being:
1. Severin discovers a mask and researches it discovering the possibility of summoning Tiamat. To do so he needs the 5 masks, at bunch of mages, a hoard that has been looted (method of acquisition important), a sacrifice who is a noble ancestral enemy, the Well of Dragons.
2. He tries to recruit the big name Dragons (which is how they know what’s going on when it starts) but only secures Imryth. He does recruit plenty of other Dragons.
3. He takes over the Cult of the Dragon and recruits some disaffected Thayan wizards
4. He realises that once he starts raiding cities he will need a way to distract the powers of the Sword Coast so with Imryths help decided that taking out Hekaton and blaming the cities of the Sword Coast should make the giants who are looking for an excuse to cut loose break the chain and start raiding as well.
5. Imryth recruits Slarkathel as he hates the Maelstrom Court and has anti divination magic.
6. What isn’t known by the PCs until near the end maybe after they have rescued Hekaton and retrieved a couple of masks is that the rescue of Hekaton and the recovery of 1 or more masks from the new Cult of Tiamat won’t stop the ritual due to the death of the Storm Giant Queen in pursuit of the ritual and the fact that Severin has gained various secrets from the masks by having had them. But what it will mean is that only an Avatar of Tiamat appears and starts to pillage the Sword Coast. Her Cult will have 100 days to recover the masks and present them to the Avatar together with the ruler of the Maelstrom Court. (So the big fight at the end of ToD is with the Avatar who precedes the coming of the Queen).
Last edited by a moderator: Jul 26, 2019

I'm planning a combination myself. I think it would be pretty easy to include large parts of Ghosts of Dragonspear Castle as well, the red wizards there being some of Severin's lackeys. Biggest problem so far is, the low/middle levels gets awfully crowded.
Also considering making Dragon Heist the start with the cult stealing the loot as another poster suggested. Even busier lower levels,though...