Review What is the most complex TTRPG of all time?

Dannyalcatraz said:
I suck at that one.
Click to expand...

Same. I keep saying I’ll DM a different one but it never happens.

Zubatcarteira said:
I've heard FATAL is pretty complex, but we don't talk about that one . . .
Click to expand...

FATAL's not really that complex. It's just additions to a 3E/d20 SRD base. Disturbing rape-fixated additions. Complexity wise, Space Opera leaves it in the dust, just by having a different skill chance calculation for each skill.

Phoenix command lite, better known as Aliens Adventure Game, took me an average of 5 minutes and at least 3 rolls to resolve a single attack. Rhand: Morningstar Missions, a close variant of Phoenix Command, took longer still, and the tables alone were multiple pages each table. (A different edition than I had was a straight up supplement for Phoenix Command).

Tri-tac's various games are similarly complex, but more math and less tables by comparison to Phoenix Command. ANd armor locations exceed 50 on a human. Belt Buckle is one of them... and we're not talking texas style ones, but military undress web belt sized buckle. Skill formulae. The best known is probably Bureau 13... I don't know which spawned the other, but the RPG and the novels are directly related. And I really can't recommend either of them.

I suspect it's a race between Phoenix Command and Aftermath, and I don't really want to know who'd win.

Davies said:
I suspect it's a race between Phoenix Command and Aftermath, and I don't really want to know who'd win.
Click to expand...

Having played both, Phoenix Command. Hands down.

From my old school perspective, Chivalry & Sorcery was the one that we all considered to be the most complex.

D1Tremere said:
I can't think of any that are so complicated as to require an aerospace engineering degree, but both Champions and RIFTS did stand out for how ponderous they were do to the number of basic math operations needed during character creation and gameplay.
Click to expand...

aramis erak said:
Complexity wise, Space Opera leaves it in the dust, just by having a different skill chance calculation for each skill.
Click to expand...

Space Opera is the most complex game I've engaged with. A group of hardcore Rolemaster players spent an evening doing PC gen. We never actually played.


Fenris-77 said:
Burning Wheel is quite complex. In a good way, for those who like it, but it terms of complexity of interlocking systems its up there.
Click to expand...

It's certainly not rules light! But I don't think it's as complex as RM.

It's certainly not rules light! But I don't think it's as complex as RM.

The modifier list for combat in SO has some real gems... like the bonus to hit for being a PC instead of an NPC.

aramis erak said:
The modifier list for combat in SO has some real gems... like the bonus to hit for being a PC instead of an NPC.
Click to expand...

I've got nothing in principle against a bonus for PCs compared to NPCs - it's a version of a "mook" rule, on the attack roll rather than damage side of things.

I don't remember much about our Space Opera PC gen, except that my character had a monofilament katana and a staff that had a gravitic-type field that shifted all the mass to the striking end at the moment of impact. (I don't know if these were by-the-book or GM innovations.) One of the other players succeeded on the check for psionics and his PC seemed quite broken as a result.

For a while, my college group would try to generate an SO character if we weren't involved in any of the scenarios running that day. I don't think anyone ever finished, and I'm pretty sure we never played. Having that many d100 rolls for stats (there was a lookup table to convert to a 1-20 range, I think) basically ensured that every character would have some cripplingly low stat. One chap started trying to re-organise the system to make it more playable, but gave up.

Not exactly an RPG, but it can be as long as one (or some of them, longer than some, but not as long as the longest ones).

When using SFB as the way to run the battles in the game, Federation and Empire is pretty darn long and complicated.

Haven't tried some of those listed in the thread (synnbar, FATAL) but did run Rolemaster. MERP/Rolemaster/ICE? is probably the most complex RPG I've run. Eclipse Phase is purportedly complex, but I've never actually read the rules deep enough to run it, just read the books for fun more than to play.

Rafael Martin said:
What is the most complex TTRPG of all time? I am thinking of a game that you would have to be a rocket scientist (or another occupation that needs an extensive education of many different areas of knowledge) to enjoy.
Click to expand...

My answer is always Enforcers, a super hero setting in the near future that came out in 1987. A calculator is absolutely required as some of the derived statistics for your character was determined by calculating square roots. The back cover touts Enforcers as the "easiest, fastest, most flexible super-power role-playing game." Just a few lines down the writer's proudly proclaim "LOTUS compatible spread sheet program for online character sheets." For a certainly value of online of course. This was 1987 and most of us didn't have personal computers and those of us who did really weren't online in the sense that people are online today. We had no problem with GURPS but nobody in my group was touching this one.

aramis erak said:
Phoenix command lite, better known as Aliens Adventure Game, took me an average of 5 minutes and at least 3 rolls to resolve a single attack
Click to expand...


Oh wow, I've still got that one somewhere. from back when I was 14 and Aliens-obsessed and would buy anything with a smartgun on the cover.

Never even tried to play it. Even at that age and with zero real-life RPG experience I could tell that something was a bit dodgy there. And then later on i learned that this was the dumbed down version of Phoenix Command - they cut out the half-second combat phases for beginner-friendliness, apparently!

the Jester said:
I haven't read it, but from what I have heard, Synnibar is unreasonably complex.
Click to expand...

waaaaaay back, I was a playtester on the first expansion. Raven was a regular in one of my D&D circles as well.

Marc_C said:
Synnibar: "Rule Zero of every role-playing game is supposed to be either "The GM is always right" or "The rules shouldn't get in the way of the story", right? Not so in the World of Synnibarr! The GM is required to write his adventure notes down before the game begins, and then show them to the players after the adventure is over — and if the GM deviated from his written notes, the GM is required to award them bonus experience points. Worse still, the rulebook states that the GM "may not, however, deviate from the rules as they are written, for if he or she does and the players find out, then the adventure can be declared null, and the characters must be restored to their original condition, as they were before the game began." As such, rules-lawyering is openly encouraged in this game."
Click to expand...

Synnibarr is...uh...unique. Its' complex, for sure, it's also complicated, definitely, it's also a brilliant RPG if you want to know what an insane Chaotic-Neutral teenager on hard-core drugs would write down and think "Cool...!".
I have GM'ed Synnibar a fair number of times (call it...a bit under a dozen; and yeah, anyone actually running a 6 hour session of Synnibarr at least once has quite the accomplishment under their belt if you ask me! ). I have to admit, much to my dismay, that my players and I all thoroughly enjoyed the heck outta those game sessions! It's, imnsho, EASILY, the best "Anime RPG System Out There!". Easy. I mean...'c'mon!

"Your Ninja is attacked by two invisible stealth bi'reel who tessaracted in carrying their midnight sunstone bazooka's! They shoot, and do... 18,000,000 damage! Make a Class AA save vs a tight-beam phase attack because you're ninjas. The Medusa-Class Battleship in orbit is adding to their to-hit with their Venerant Nalberong 'Star Seer' FO spotters located on the top of Mount Keshin only 9 miles away...totally within their eye sight. Oh, and mark off one torch because the bazooka blast is going to break it. Sorry".

Will drop Rolemaster into the mix (but with all the supplements in action). It is very organised (and not often contradictory) but is complex.

Champions/Hero System is pretty complex in character creation, and then you have Kill damage and Stun damage, based on the values on the dice you roll in actual play, but really past character creation it isn't that complex.

Millennium's End, has to be in the running. You lay a template over a silhouette of the target in various poses. Then roll your attack the value on the percentile dice tells you where the bullet impacts on like one large number of locations. You then look the location up and see how far the bullet penetrates and that can tell you if you shatter a bone, or hit a vital organ, that leads to various bleeding or disabilities.

Bagpuss said:
Millennium's End, has to be in the running. You lay a template over a silhouette of the target in various poses. Then roll your attack the value on the percentile dice tells you where the bullet impacts on like one large number of locations. You then look the location up and see how far the bullet penetrates and that can tell you if you shatter a bone, or hit a vital organ, that leads to various bleeding or disabilities.
Click to expand...

Should be called "Bones TV Series the RPG!"

Reminds me of a French rpg I only played once in which we had to guesstimate the speed of the wind and direction before telling the GM which angle we gave to our bow shot. He looked up a table and told us, you are short, it went wide, it went over, and then we were supposed to adjusts our guesstimation until we hit. Totally UNFUN, now you know why we never played again. I think the game was called 'Légendes' (1983).

Looking it up I see there is a 'Premières Légendes' (First Legends) version (1987) which simplifies the system. It has a Celtic setting.
Last edited: Oct 6, 2021

Umbran said:
So, if you want a really complicated game (though, admittedly, it is more live action than tableotp), there's one unpublished game, called Professions and Paychecks. Literally everyone is playing it these days...
Click to expand...

As a Level 21 Lawyer, my PC is prevented from adventuring as he is perpetually learning new spells (in-world, referred to as "CLE" and "Client Online Training Modules."

When my PC does adventure, he has to expend his bonus action every round updating the computer system and filling out a checklist. It's not helped by the action economy.

Umbran said:
So, if you want a really complicated game (though, admittedly, it is more live action than tabletop), there's one unpublished game, called Professions and Paychecks. Literally everyone is playing it these days...
Click to expand...


That's why many of us started to FREEBASE. 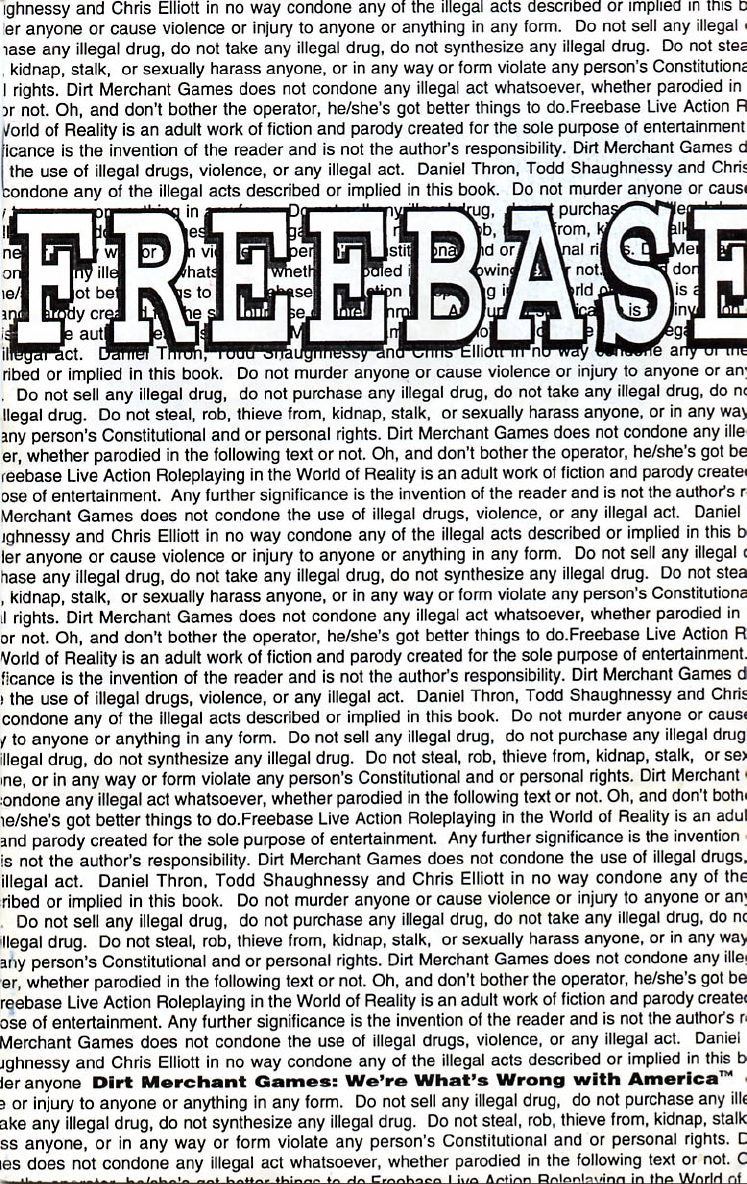 Freebase: Live Action Roleplaying in the World of Reality.