gyor said:
Those are loud Larian haters and they were bashing BG3 long before this. Its unrepresentive of their market.
Click to expand...

If you want to believe that, fine.
It only is not true. Many people I know not to be Larian/Divinity hater have the same opinion.

Reynard said:
I peaked into r/BaldursGate to see if there was any interesting discussion. Wow. That place is upset.
Click to expand...

I love the old BG games, and I'm excited to play this.

Hot take: As a CRPG city sandbox environment, Athkatla > Baldur's Gate and it wasn't even close. 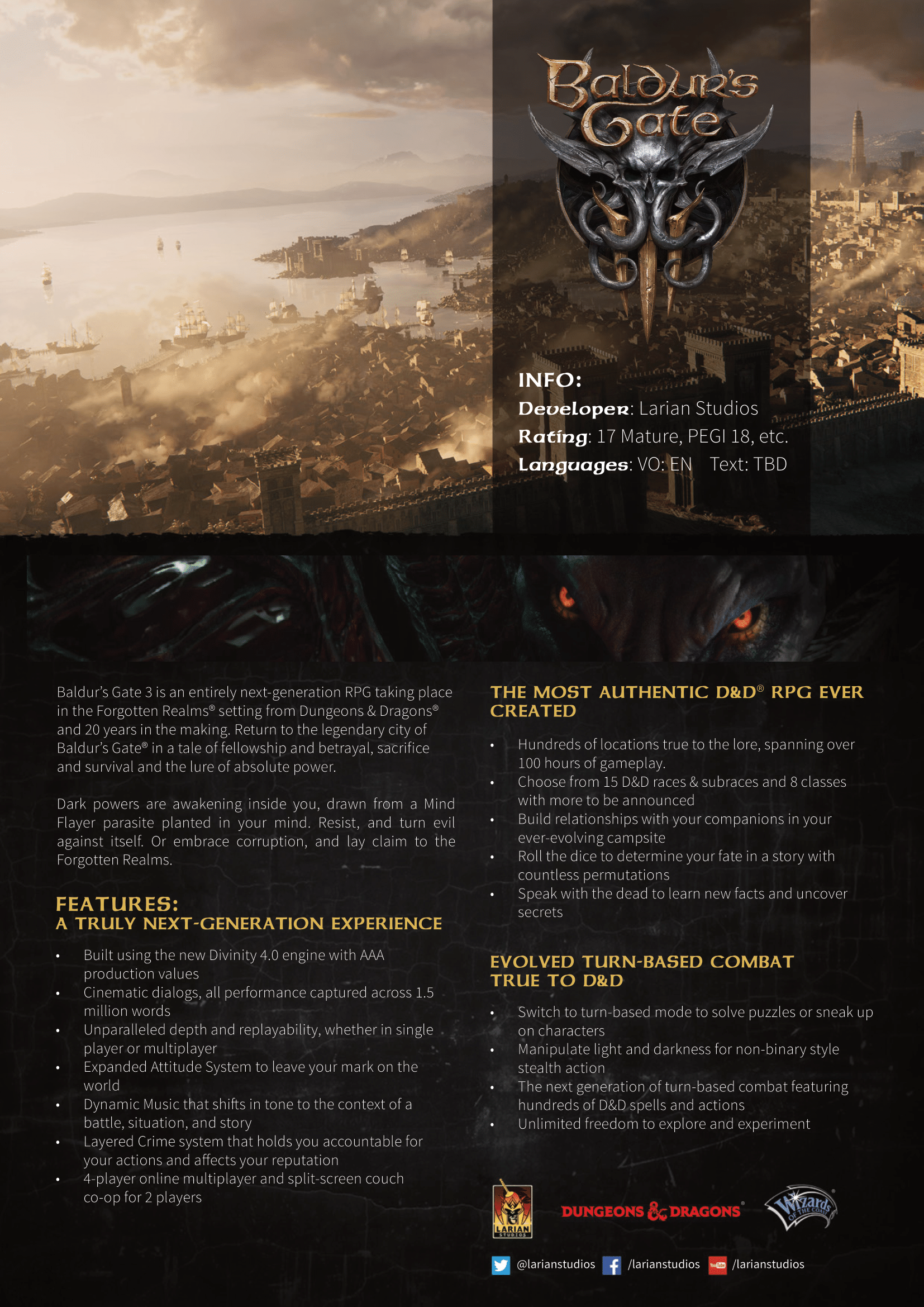 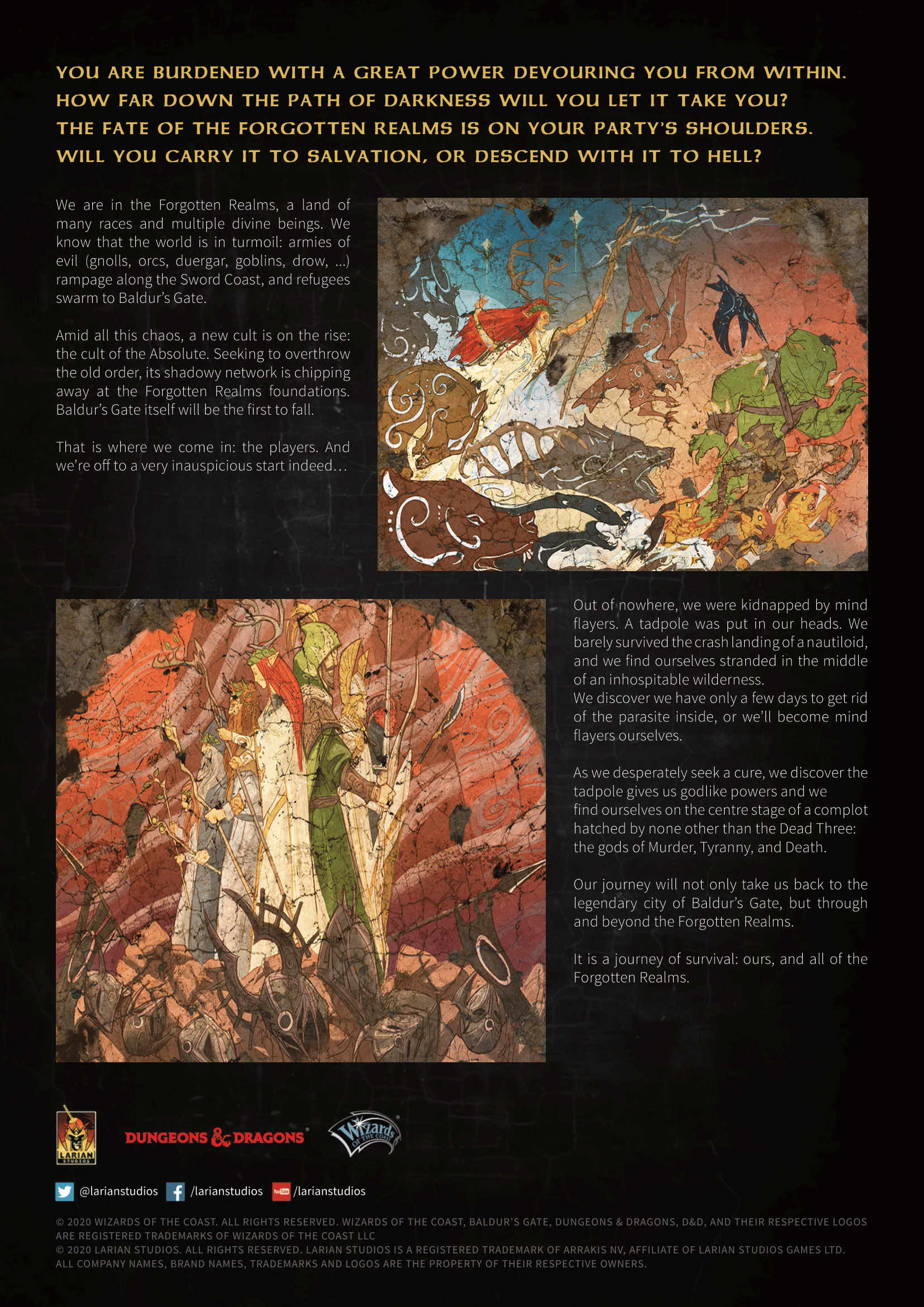 @MonsterEnvy I tried to do a google image search of these promotional materials you posted, and nothing turned up. Could you share your source? I'd like to quote part of it, and want to make sure I'm quoting something official.
M

Quickleaf said:
@MonsterEnvy I tried to do a google image search of these promotional materials you posted, and nothing turned up. Could you share your source? I'd like to quote part of it, and want to make sure I'm quoting something official.
Click to expand...

I don't know, I took the imgur links from another forum and did not ask what the source was.

MonsterEnvy said:
I don't know, I took the imgur links from another forum and did not ask what the source was.
Click to expand...

Gotcha. Do you recall which forum? I'd like to track to the source.

So far I've compiled the following juicy lore tidbits relating to BG 3. I've tried to be transparent when I speculate, calling out my speculation in blue. Please correct me if I'm mistaken in any of my lore gathering!

Playable races include Githyanki and Tieflings-with-subraces (from Mordenkainen's Tome of Foes) such as the Asmodeus Tiefling.
speculation: The presence of tiefling sub-races based on archdevils suggests devil/Nine Hells-based intrigues feature in BG3.

Swen mentioned that the protagonist gets the nautiloid to crash land about 200 miles east of Baldur's Gate. Which just happens to be where Elturel was before being dragged to hell in Descent into Avernus.
source:
Also, Swen said that the city being destroyed by the mind flayers was Yartar which lies east of Neverwinter and Triboar. This is way to the north of Baldur's Gate.
source:
The NPC Shadowheart mentions "the chase through hell.”
source: speculation: This may imply the nautiloid ship was planeshifting into and out of the Nine Hells. The snowy twilight canyon the red dragons chase the nautiloid through does have strange crystal formations that glow with their own light ()...

The NPC Gale has a "devastation orb" like a ticking bomb in his chest. Interestingly, a "devastation orb" was mentioned in connection with Yartar in Princes of the Apocalypse (p175): Members of the Hand of Yartar thieves' guild acquired a "devastation orb" from the Lord Protector of Triboar's vault and attempted to auction it off to the highest bidder.
source:
“As we desperately seek a cure, we discover the tadpole gives us godlike powers and we find outselves on the centre stage of a complot hatched by none other than the Dead Three: the gods of Murder, Tyranny, and Death.”
source: https://i.imgur.com/wDhL6kh.png (I still need to confirm source as official)

The Dead Three – Bhaal, Myrkul, and Bane – are no longer dead, but rather existing as demigods. Rather than retreat from the world along with most gods (at Ao’s command), they chose to remain among mortals in a weakened state as demigods to enact their schemes.
source: DNDBeyond 'Baldur's Gate 3' and The Dead Three in D&D & Dragon Talk Dragon Talk: LYSK The Dead Three, 3/15/18

In Baldur’s Gate 2, Gorion’s Ward either destroys or absorbs whatever is left of Bhaal’s essence and even has the option to take his place as the new Lord of Murder.
source: Baldur’s Gate 2

The last known Bhaalspawns (Abdel Adrian & Viekang) fought, and one was killed, while the other turned into a blood-soaked horror that was defeated by adventurers. With all of his spawn dead, Bhaal’s essence was unbound, allowing for his resurrection.
source: Murder in Baldur’s Gate, page unknown.

Myrkul retrieved the Silver Sword of Gith from the Abyss and gave it to one of his followers. Also, Myrkul was depicted as a nearly dead god-corpse floating in the Astral.
source: Neverwinter Nights 2: Mask of the Betrayer
speculation: Githyanki are known for inhabiting god-corpses, and some could have a fortress on Myrkul’s semi-alive body.

Bane appears to have been reborn by consuming his half-demon (cambion?) son Iyachtu Xvim in a pillar of green flame and using his body.
source: The Grand History of the Realms, page 152.
Last edited: Feb 28, 2020

Oofta said:
For me it depends on the game. It works reasonably well for games like The Witcher series but there you only have one protagonist and limited options/tactics available.
Click to expand...

Oh, I agree. It's when you have an actual group of characters each with multiple options, that real time starts showing its flaws. That was my big complaint about the BG games after coming in from the SSI Gold Box series.
M

Quickleaf said:
Gotcha. Do you recall which forum? I'd like to track to the source.
Click to expand...