In the initial printing of Strixhaven: Curriculum of Chaos, the credit for Tanya DePass’ (who recently ran the hugely successful Kickstarter for the Afrofuturist RPG Into the Mother Lands, and founded the organisation I Need Diverse Games) role as cultural consultant was omitted. WotC has apologised and promises that the credit will be included in future printings.


The first print run of #Strixhaven missed a crucial credit - the consulting work by @cypheroftyr. We publicly apologize to Tanya for the omission, as we have privately. Future printings will include her credit. See the attached page w/ updated credits already available digitally.

We also failed at communicating this update appropriately. We apologize for both our communication failure and for making the initial credit mistake in the first place.

Thank you to all of our fans for pointing out our mistakes so that we can correct them. We hope our error doesn’t diminish any enjoyment of the work all our teams have put into making #Strixhaven the best it could be. 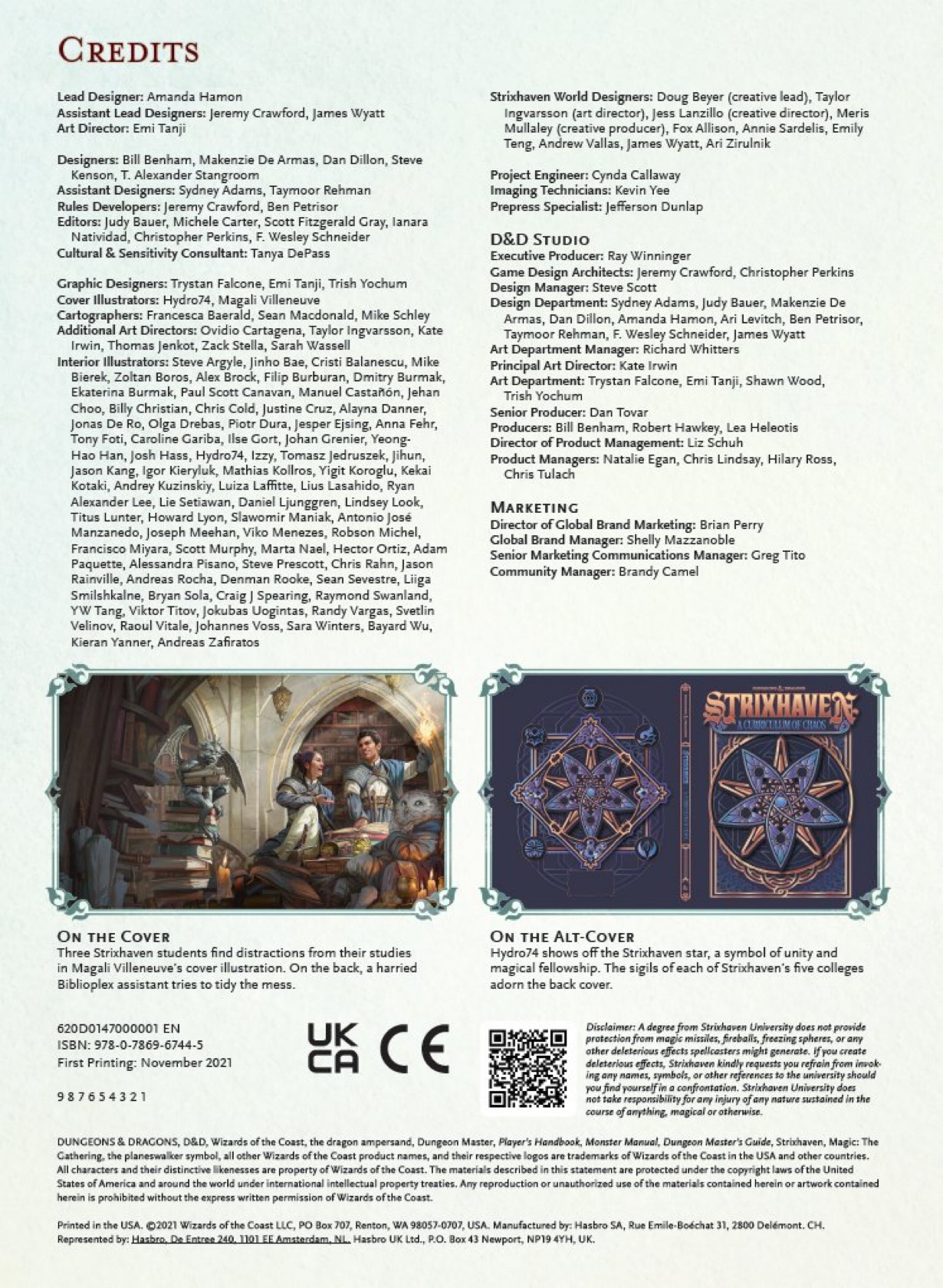 Morrus is the owner of EN World and EN Publishing, creator of the ENnies, creator of the What's OLD is NEW (WOIN), Simply6, and Awfully Cheerful Engine game systems, and co-host of the weekly Morrus' Unofficial Tabletop RPG Talk podcast. He has been a game publisher and RPG community administrator for over 20 years, and has been reporting on D&D news for two decades. He also is on a Twitter.
B

Oof. That's an especially awkward mistake, into which I'm sure some people will read unintended meaning.

Ouch, it happens. Happened to a dear friend of mine. We found out just after we went down to the FLGS and purchased the book together, each getting our own. Found out driving him home.

What's worse being left off entirely or having your name spelled wrong (the latter of which has happened to me when having something published - not gaming related)? Both can feel like casual disrespect and, depending on how egregious the latter is, both can seed doubt about your involvement. Glad they are correcting this.

Awkward, but it happens. I was accidently omitted as a proofreader for a Swedish game. Noticed that after I had purchased a copy of the game (very seldom that I have been given a copy of the product I have proofread. I can count the instances on the fingers of one hand)... Because the list of proofreaders and other people that should be thanked are usually the last thing that is done before it is sent to print, and noone checks that. For another product they managed to spell the name of one of the proofreaders wrong..

Edit: the game my name was omitted from, was only printed in less than 300 copies as far as I know.

Martin Scorsese totally forgot to thank me in his acceptance speech at the Oscars.

AND I still haven't gotten credit for that double Space-X landing at sea.

In my land we say "More was lost in Cuba", (about the painful defeat in the Spanish-American 1898 war. One of my ancestors was there) as a consolation phrase. It means we shouldn't be sad or angry because some bad things happen because even worse events have happened and we have to learn to face life with "phylosophia", with a right point of view to not fall in the despair neither bitterness.

All they can do is apologize and offer to make it right. Then drop it and move on. There will be some people that will not accept an apology no matter how long and often you say it. I'm not saying this is the case here, as I have no clue, but if does seem like an honest mistake and the new layout shows that they are sincere in getting it right.

I'm sure there will be another mistake coming shortly- likely with TSR6.

Personally as long as my check cleared I wouldn't care.

But still silly the proofreader didn't catch it.

It has happened to a good friend of mine. He WAS credited, but they spelled his name wrong. He's not bitter about it though.

Ok, but when are they going to apologize for Silvery Barbs

sevenbastard said:
Personally as long as my check cleared I wouldn't care
Click to expand...

Fair, but if you were trying to bring about change, had your own organization that your name is tied to, and you are a freelancer...

I think one may care a bit more.

That's a bummer, but it is cool that she worked on it. If you ever have the opportunity to watch Tonya DePass speak (whether online or in person again eventually), I highly recommend it. Saw her speak with Peter Adkison and Steve Kenson at Gen Con '19.

sevenbastard said:
Personally as long as my check cleared I wouldn't care.

But still silly the proofreader didn't catch it.


Product credits are important in this industry. My name got cut out from all but one of the books I worked on for a 3rd party, and its like half my resume doesn't exist anymore.

The most important thing about credits here is that (1) WotC has publicly acknowledged this and published the apology, so she can save that apology as errata; and (2) that errata will be incorporated into future publications.

Jobs are made and lost based on whether someone's credits on a particular project check out or not.

This is entirely different from say, MercurySteam refusing to give credit to designers who worked months if not years on Metroid Dread and designed key elements that made it into the final game, just because their work was less than an arbitrary % of time on the project. Those developers who were not credited will suffer the consequences of their CVs constantly being questioned because MercurySteam didn't deign to give them credit. And in the game development world, credits are EVERYTHING. They're the proof that you know what you're doing.

Marandahir said:
The most important thing about credits here is that (1) WotC has publicly acknowledged this and published the apology, so she can save that apology as errata; and (2) that errata will be incorporated into future publications.
Click to expand...

I think the most important thing is that Tanya feels like the matter is resolved, and asked people to consider it as such. But otherwise you are correct

Bolares said:
I think the most important thing is that Tanya feels like the matter is resolved, and asked people to consider it as such. But otherwise you are correct
Click to expand...

Yes, you're right! I read her chain of tweets after posting.

That's more important than what I was saying. But I was speaking to the fact that in this case, it was resolved. This is a problem in recent news, and we've heard about it elsewhere where people don't feel like their issue is resolved - like the case with MercurySteam and those developers on Metroid Dread.

Marandahir said:
But I was speaking to the fact that in this case, it was resolved. This is a problem in recent news, and we've heard about it elsewhere where people don't feel like their issue is resolved - like the case with MercurySteam and those developers on Metroid Dread.
Click to expand...

Sure sure, not trying to call you or anyone discussing it here out. Just said it to expose her request to consider the matter resolved to the thread, as I assume not everyone will read all her tweets.

Marandahir said:
And in the game development world, credits are EVERYTHING. They're the proof that you know what you're doing.
Click to expand...

Legendary Games, What They Produced and Learned in 2021, and 2022 Plans