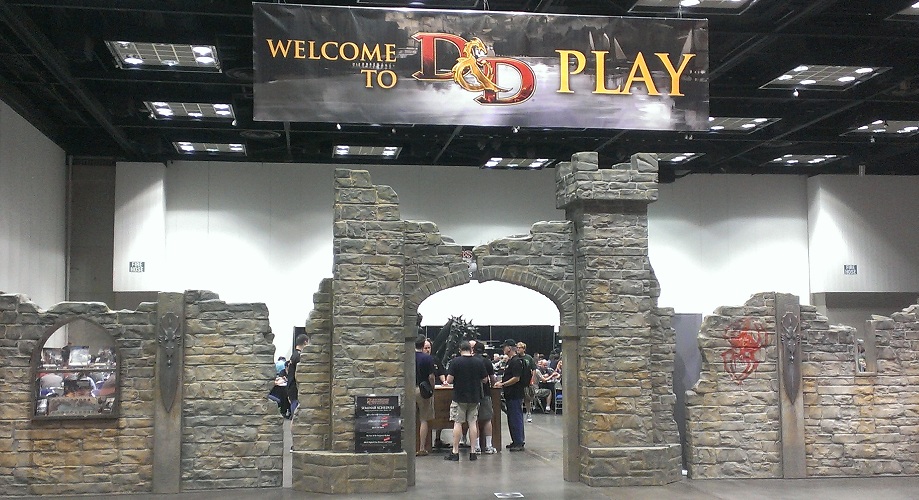 Here are all the convention details:

January 27-29
Henry B. Gonzalez Convention Center
900 E Market St.
San Antonio, TX
Chris Perkins and Trevor Kidd will be at PAX South at the end of this month. Chris will have the honor of delivering the key note Story Time with Chris Perkins on Friday morning, as well as stepping onto the main stage to serve as Dungeon Master for Acquisitions Incorporated, live for the first time from sunny San Antonio. Many Dungeons & Dragons games will be playable in the open gaming spaces scheduled through the D&D Adventurers League. We definitely won’t be playing in the basement of the Alamo, thankfully.

March 10 -12
Boston Convention & Exhibition Center
415 Summer Street
Boston, MA
Chris Perkins and Trevor Kidd will be in Boston at PAX East again this year. Chris will serve as Dungeon Master for another Acquisitions Incorporated live show with Mike, Jerry, Scott, and Pat. There will be many opportunities to play Dungeons & Dragons in the open gaming spaces of PAX scheduled through the D&D Adventurers League.

March 23-26
Grand Geneva Resort & Spa
7036 Grand Geneva Way
Lake Geneva, WI
We’re heading back to Gary Con in Lake Geneva again this year! Mike Mearls, Jeremy Crawford, and Chris Lindsay will be panelists in a discussion of D&D Across the Editions. Mike Mearls will be DMing a celebrity game using his Greyhawk house rules for 5e in one of the deadliest dungeons he’s run in his personal campaign: the dreaded Path of Blades. Mearls will also run a home brew horror RPG based on the Avalon Hill board game Betrayal at House on the Hill. Chris Lindsay will head up a host of Dungeon Masters as we present the Hidden Shrine of Tamoachan and the Tomb of Horrors as competitive events for the first time in decades. Also, don’t miss the EPIC designed by Chris Lindsay, featuring the Keep on the Borderlands.

September 1-4
Washington State Convention Center
800 Convention Place
Seattle, WA
Chris Perkins, Trevor Kidd, and many more folks from the Dungeons & Dragons team will be at PAX West. Chris will be on panels and serving as Dungeon Master for the live Acquisitions Incorporated game with Jerry, Mike, Scott, and Pat. Many of us will be around in the Dungeons & Dragons area and there will be tons of opportunities to play D&D in the open gaming area scheduled through the D&D Adventurers League.

September 9-10
Rhode Island Convention Center & Dunkin Donuts Center
1 La Salle Square & 1 Sabin St
Providence, RI
Join us in Providence for the debut of HASCON, a new convention event in September focusing on all of Hasbro’s brands including Transformers, My Little Pony, Magic the Gathering and, of course, Dungeons & Dragons! You will get to peek behind the curtain of our characters and stories through interactive experiences, exclusive products, talent appearances, panels and much more.

November 2-5
Alliant Energy Center Exhibition Hall
1919 Alliant Energy Center Way
Madison, WI
Mike Mearls and Chris Lindsay will return to the Midwest in November for Gamehole Con in Madison. Mike and Chris will be attending panels, serving as Dungeon Masters in unique Adventurers League scenarios, and hanging out and answering any questions you might have.
Last edited by a moderator: Aug 7, 2019

Scott is no longer doing Acq Inc after PAX South so you should update to indicate that.

Oooh, Celebrity Path of Blades in March. Could be interesting.

Sad.
Given it's GenCon 50, I was hoping WotC would make an appearance.

Yes! Now I can plan my con season

JRedmond said:
Scott is no longer doing Acq Inc after PAX South so you should update to indicate that.
Click to expand...

Where was this announced? Any reason given for why he is stopping?

That'll be a big loss and will really change the dynamics. It'll be hard to find someone to take his place that will have the same chemistry.
E

PAX needs one more convention. They need to change the one in Texas from South to Southwest and do one in Florida or Georgia and call it Southeast.
J

Actually he won't be doing it at Pax South either. It's right on the front page of www.pvponline.com. You can read his reasoning there.


MNblockhead said:
Where was this announced? Any reason given for why he is stopping?

That'll be a big loss and will really change the dynamics. It'll be hard to find someone to take his place that will have the same chemistry.
Click to expand...

Jester David said:
Sad.
Given it's GenCon 50, I was hoping WotC would make an appearance.
Click to expand...

Some of the folks may be there, but they've made it clear for a while that business-wise they are not doing GenCon.
T

Enevhar Aldarion said:
PAX needs one more convention. They need to change the one in Texas from South to Southwest and do one in Florida or Georgia and call it Southeast.
Click to expand...

They do have one more convention, PAX AUS in November. (Incidentilly the only PAX WOTC have never been to ) I doubt there is room for anymore.

They're also technically going to be at the Game Developer's Conference at the end of February.

I'm...sort of...torn...on this "HasCon" thing. I can't help wondering just how many "con" elements they're going to tack on to what seems to me to be essentially sort of an in-house trade show.
V

I've been pretty impressed how fast GaryCon has grown. For a long time, I thought it was just an old school thing.
T

Von Ether said:
I've been pretty impressed how fast GaryCon has grown. For a long time, I thought it was just an old school thing.
Click to expand...

THe problem you have is that little cons can become big cons and that pushes against the people who only attend because its a small con. Some people dont want the big con issues with lines and ticket issues and accomodation issues. We seem to live in some strange culture where big = better.

Rhode Island!? Yeah, most of us will see you there Hasbro <\sarcasm>

As this is the 50th GenCon and thus will likely be playing up its history and the parallel history of RPGing - as it should, really - and as WotC are now custodians of much of the early part of that history via their purchase of TSR never mind being themselves responsible for much of its recent history via rebooting D&D with the 3e release, their non-attendance this year can be summed up in one word:

What about Uk/Europe?
T

What about UK/Europe? Have WOTC in any Official capacity ever visited a Convention in UK/Europe?

Lanefan said:
... their non-attendance this year can be summed up in one word:

Disgraceful might be too strong for me, but "very disappointing" is more apt for my feelings. I understand why on paper, but it's a little like watching your grandparents get divorced. Feels so weird and wrong to not see them together.
T

That is a very strange analogy Henry