Kaliban stood on Hawthorne's shoulders, swords out. He was able to duck under low-hanging moss without disrupting his balance. Hawthorne, on the other hand, waded waste-deep into the damp black plant-matter, and struggled to get through. Finally, he was able to hoist Kaliban up into the north-west tunnel, and to climb up himself. By the time he pulled himself up, his trousers were so saturated with slimy moss-goo, that he could only waddle in discomfort.

Crock Jon has tried his best, and the appearance of the second Meenlock makes him realize that he is not able to hold off the inevitable any more. "I'm sorry, suh. There's more than one ov'em." (The voice emanates from the moss, not giving any help for his position.)

He lets go, and withdraws from the fight. He doesn't like to lose, but the screaming in his head, the darkness, and the numbers of opponents are just too much.

Crock Jon shoved one meenlock into the other, giving himself a moment to make his escape. He was completely turned around and had no idea which way to go to escape - away from the meenlocks was all he could manage. He pushed his way through the moss until, by a lucky twist of fate, he came upon Kaliban (with Hawthorne not far behind).

Having some space now that he doesn't need to guard Argenti and Ethian, the elemental smashes the meenlock into the wall, pulping its ribcage.

Stepping over the remains, Cairn is fairly certain he will emerge into the area cleared by Argenti.

Move: across the body, toward Ethian and Argenti (hopefully) - WIS is +1 if the save is still needed, roll as needed

With Ethian safely out of the way, Cairn pummeled the stunned meenlock.

Ethian remained in a nightmare stupor for a full minute before Argenti could revive him. As an elf, Ethian did not sleep and therefore, did not dream. He had never quite experienced anything like a nightmare (the closest he could imagine was being poisoned). He was understandably shaken.

"I'm in rough shape, suh. I'm sorry I couldn't hold on. Were others hurt?"

Crock Jon asks Kaliban, or anyone else. "I'll need a moment."

Cairn used the time the group found each other to clear up the space Argenti started clearing. He pushed all cleared moss into the chokepoint where Ethian and he killed their meenlock, leaving only one easy path of access. He positioned himself there and leaned into the dark wall of the mine, becoming just one more protrusion on the wall.

He tries to become one with the stone, drawing vitality from his contact...but the stones of the mine are as hostile as ever and he barely recovers any mass.

"Ethain, Carin, are you two ready to move?" The genasi asks. "We have to find the others."

"Argenti-boss, this one disagrees. We, separated, could all run around forever. They, the other group, will find us if we move slowly and call out. And clear out the moss. And we, this group here, need to make a safe base. Ethian-leader is still out."

Hawthorne is about to place a friendly hand upon the shoulder of the halfork, until he looks and see just how disgusting and sludgey-mossy his gloves are now. It hovers for a second over Crock Jon's shoulder, then he brings his hand back down to his side. "No worries, Crock Jon, we can give that to you, absolutely."

He takes a second to consider his pack and what he has in it, then sighs inwardly. "I don't have anything to give you to help with your injuries I'm afraid. But once you've regained your breath, maybe we can meet back up with the others quickly and then take a full breather to help you feel a bit better, eh?"

He takes a few moments to look both ways down the tunnel and cups a gross hand to his ear to try and hear anything of note, hopefully someone in the other group.

"Yes. Thank you. Let's go now,' says Crock Jon holding his shoulder where the Meenlock had bit into him, staunching the blood.

It took nearly half an hour of careful searching, with noises seeming to come from all sides (that later turned out to be nothing), for the Black Dragon Agents to be reunited. By then they were fed up with the place entirely, and concerned that they would have trouble ever finding their way out.

Cairn had hollowed out a space free of black moss where they could discuss their plans (and potentially get a much-needed breather).

After he had caught his breath, Crock Jon lay down in the moss and had a quick nap, snoring gently (or at least more gently than one might expect of a half-orc his size).

"So, where next?" rumbles the wall near the exit of their little haven

The unnatural tunnel was dark, cramped, moist, and smelled of spoors from the crushed moss. To make things worse, there was still the combination of strange half-heard sounds (and yet all true sound was still muffled), a terrible sense of dread, dizziness, and the occasional visual hallucination.

Crock Jon slept, but his gentle snoring soon turned into grunts and moans as his one dream turned to a nightmare, and he woke with a start. When it was time to get moving again, everyone agreed that they should try to get this over with as quickly as possible.

A fey infestation was a thing to be feared, but it was ultimately an infestation like any other. These meenlocks could be killed - therefore this infestation could be exterminated. 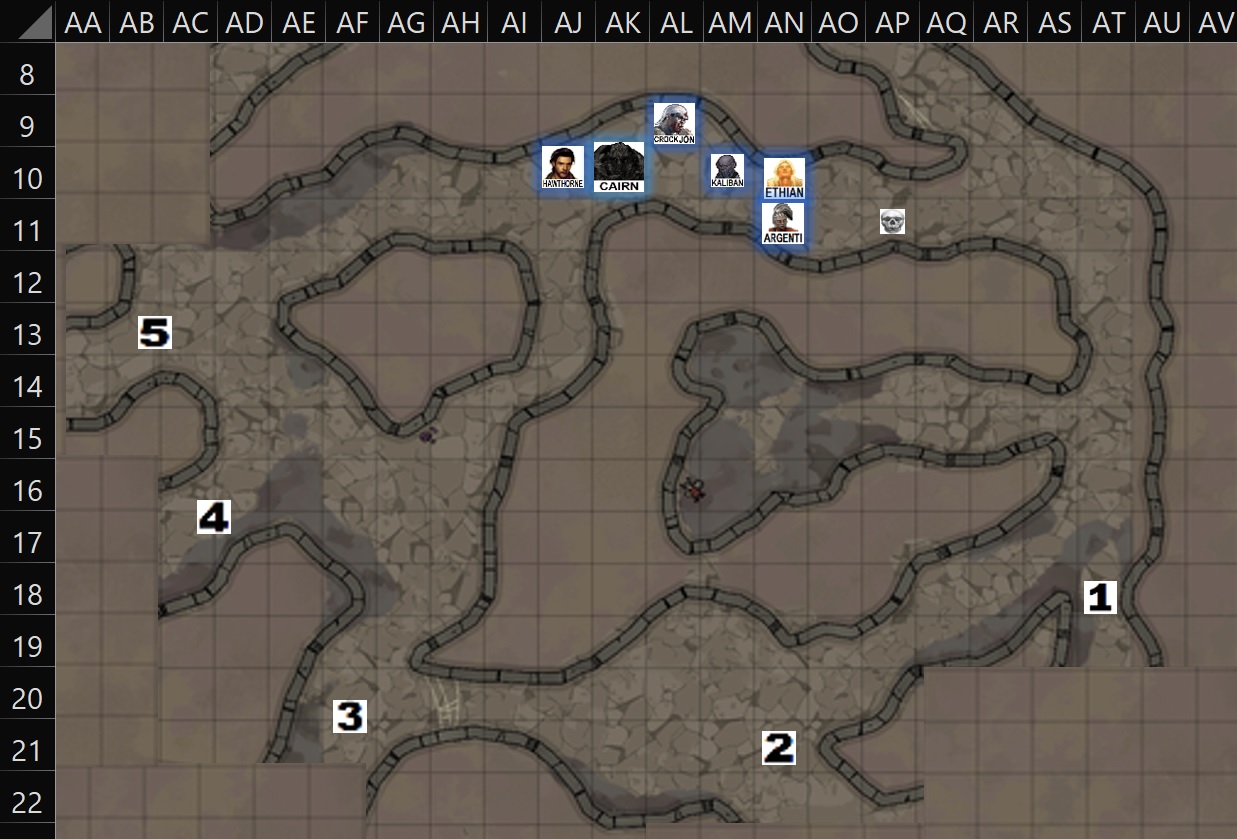 "This, moss." Argenti says with a hint of distain. "It hampers the earth so much."

Ethian is grateful for the rest, although he doesn’t sleep, he lays back, letting his thoughts wonder

During their discussion, Ethian agrees with Argenti “As far as I’m concerned, we either go deeper, or we go back up to check on the others. And we’re already here, so might as well continue”