Supporter
Crock Jon continues to struggle with the creature he is grappling. He is able to make some coneection but the cruel beast shrieks and writhes foully in his grasp.

"I'm sorry to bother you, suh. I seem to have missed the path."

Cairn swings again, this time the monster's position gives him enough space to swing, and Argenti clearing the moss helps. With a satisfying vibration of the stone, air, and quivering of meat, his stone hands slam the meenlock between a rock and a hard place.

"Thank you, Argenti. This one elemental appreciates it."

Crock Jon continued to wrestle with his Meenlock opponent he pulled hard on its shell-like shoulder. The fey creature squealed, a high-pitched sound that was swallowed by the moss, and it clamped its pincher down hard on Crock Jon's arm, sending shocks through his system.

Cairn smashed his rock into one of the fey creatures, but the thing still held onto him, perhaps trying to break off a piece of his rocky hide. The moss nearby him rustled, and for a second he thought that there would be another one, but there was Hawthorne and Kaliban, pushing their way through behind the Meenlock.

Ethian is getting frustrated at the creature in front of him. He cannot see it well, and is having trouble hitting it. Regardless, he strikes again using elven battle magics.

Supporter
"Argenti! Cairn! There you are!" Hawthorne shouts, as the meenlock keeps taking swings at them. He moves up next to the creature and stabs at it while his allies keep it distracted from the other side.

Kaliban follows Hawthorn through the maze until they find their comrades. Upon seeing them engaged with the fae beasts he rushes forward slashing at it with his rapier. As the strike hits the gnome punches it with a telekinetic strike.

"I told you we should have squashed that bug!" Argenti quips, but is greatly relieved by seeing her comrade.

"HYAH!" The Genasi throws a rock, but the bug dodges at the last second. "Where are the others?"

Argenti felt much better now that she could see solid stone through all the moss. She flung a rock, but the meenlock ducked, and the rock disappeared into the mossy tunnel. She couldn't see them, but she could hear Hawthorne speak as he arrived, somewhere beyond the hulking form of Cairn behind her.

Hawthorne and Kaliban, still tied together, rushed the meenlock as it grabbed at Cairn. They both landed solid strikes at it as it tried to turn around, and it screeched as it fell to the ground in a heap, that immediately began to twist and writhe into an unnatural shape before laying still.

At the front of the line, Ethian managed to scratch his opponent with his thin elvish blade. He infused it with elven magic that would harm it if it moved, but the creature stayed, still trying to grab at him. 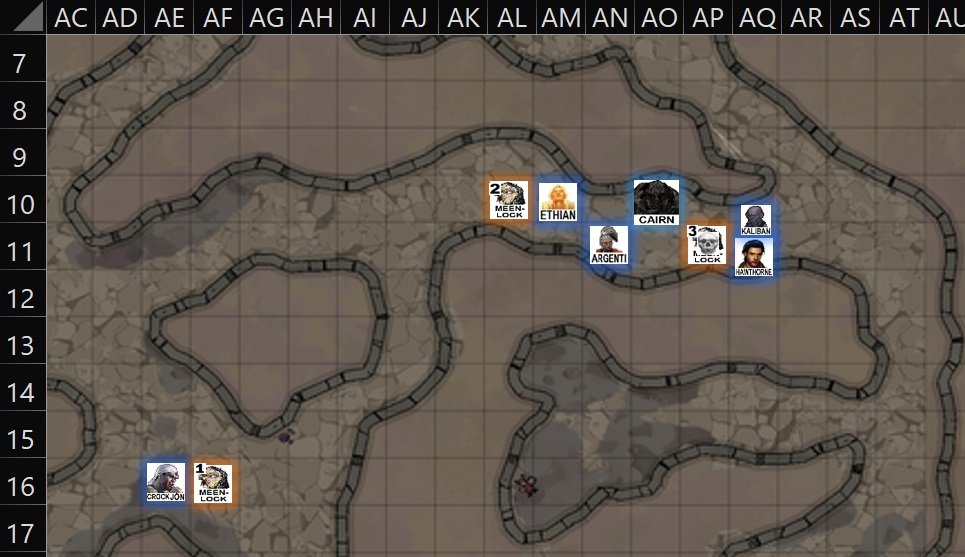 Supporter
The foul flesh of the meenlock disgusts Crock Jon, and causes him to shudder.

"I'm sorry, suh," his voice calls out, echoing aimlessly through the mossy cavern. "I can't do it."

Crock Jon had rarely lost a wrestling match, even with a much larger opponent. This creature was smallish and wiry, but the worst was that its flesh popped and slid under his grip. It was gooey and yet rough and hairy, all at the same time. Between that, and the strange sense of fear, depression, and loneliness, Crock Jon could nearly feel himself giving up. It was all he could do to stop the creature's pinchers from closing around his neck.

Supporter
Hawthorne sees three of his allies between him and the only meenlock within view. "Crock Jon is still out there, as is the creature that ran away from us, Kaliban. You up for going back the way we came to try and find Jon while the other three deal with this creature here?"

He looks down at the svirfneblin with a cocked eyebrow. "We might even come across that frightened bastard that took off from us while we're at it. Take care of two pixies with one bolt."

Argenti feels the bug trying to claw its way into her mind, but manages to block it out by smashing a glowing green rock against the creatures head. "HYAH!"

Cairn looks helplessly through the clearing of the moss before realizing he CAN do something. It is not a safe bet since stones here are weird, but still, he draws the rune of stone, naming the mine they're in and himself. Thus rooted, he focuses his will on the meenlock fighting Ethian.

"Ethian-leader, if the creature falls asleep or becomes passive, do NOT disturb it. Just go around it so this one can join you."
"Argenti-boss, make distance from the creature.

Reaction at the end of meenlock turn: Wisdom save DC 13 or fall into stupor
While charmed in this way, the creature has a speed of 0 and is incapacitated, descending into a dreamy stupor. Save repeats at the end of each round.

Action: Ready action to move next to the creature if the space opens

Ethian swings again at the meen lock in front of him, but his sword strikes some moss first and he misses

Kaliban continues to follow Hawthorne trusting his judgement. With no direct threat the gnome scans for any dangers though knowing he was never the most perceptive of people in the best of times.

Confident that he could find his way back to the group again, Hawthorne led the way back to where they had last seen the other meenlock. Kaliban followed, but the gnome was so turned around by the moss, that he had no idea if Hawthorne was going in the correct direction or not. He just held his sword and followed the rope that kept them together.

Ethian struggled with his opponent. The fey creature grabbed the elf with its pincers, and a shock went up his spine. Argenti struck the thing with a glowing rock, but it held onto Ethian with fierce determination. Then, Cairn began to create a strange, soothing rumble. The meenlock calmed, releasing Ethian, and stood twitching its antennae in synch with Cairn's rumble.