Argenti barely found her way out of the moss the first time, she doubted her ability to navigate it a second.

"Hawthorne, where are the others?" She worriedly asked. "Should we hack and burn the moss?" The young woman paused for a moment, as if someone was whispering something in her ear. "I could stay in my amulet, and give it to you, that way we can't be separated while looking for them."

Supporter
As he turned back and looked behind him, noticing the missing forms of some of their compatriots, Hawthorne panicked for just a second before taking a deep breath and steadying himself. "Okay, this isn't good."

He slung off his backpack and pulled out his length of rope, then proceeded to tie one end around his waist before then threading the other end through the loops / straps / belts of Kaliban, Ethian, and Argenti so that they'd all be connected together and hopefully not get separated. Once that was done, he glanced down at the path they just travelled and closed his eyes to focus on his hearing... trying to get any indication of where Cairn or Crock Jon might have split off from.


With a few moments of concentration he thinks he has some general knowledge of where they might have gotten off to.

"Okay, I have a plan. I know exactly what to do." He begins leading the group back the way they came. "Now, stay close. Stay close. I know. Do exactly as I say. Get ready. Ready? GET THEM!"

And he begins hustling back through the tunnel yelling for Cairn and Crock Jon.

Roped together, they found Cairn quickly enough. He had taken a short north-going side-passage and was standing at a dead-end. He had been certain that the rocks there wanted to part, to show him a way forward, but they were stuck - barring his path in a way that he still did not understand. When he rejoined the group, they found that the moss had started growing from his shoulders and his back.

As they continued with the trick, trying to find Crock Jon, at one point Ethian took a different branch of the tunnel to that of Hawthorne and Kaliban, and not knowing any better, Argenti followed him. Soon the rope was wrapped around a bend in the tunnel wall, and they played tug-of-war for awhile, calling out to each other in confusion, "Come forward! Go back! This way! No, this way!"

When they finally worked it out, they realized that a voice in the mix had not been any of them at all, though it had sounded like one or another, and had made wrong suggestions, that had kept the confusion going for far longer than it should have.

Finally, after working it out, they set out again when Hawthorne heard "Down here, Suh!" in a muffled bellow that sounded exactly like Crock Jon.

As Hawthorne led the way toward Crock Jon, Kaliban (who was next behind him on their rope-line) suddenly felt the line behind him go slack. He pulled the rope to himself, only to find a frayed, severed end.

Hawthorne grew wary as he approached 'Crock Jon'. Kaliban was trying to get his attention from behind, but the big figure that moved through the moss before him seemed odd, in spite of insisting, "I'm here, suh." in a voice very much like the big half-orc's.

Hawthorne brushed the moss aside to reveal another twisted, bug-like creature like the one they had seen in the mayor's mansion.

Ethian, who had been next in line, thought he felt Kaliban tug him forward, and heard Crock Jon's call from his right. He followed who he thought was Kaliban down a tunnel, before suddenly realizing that it was not the gnome at all. The figure in front of him stood up from being bent over (it had seemed only a moment before to be the correct height for a gnome - a fact that now seemed impossible, and Ethian cursed himself for a fool.) The creature let go of the severed rope and turned a bug-like face toward him, reaching out with a claw-like pincer.

Ethian stumbled backward, bumping into someone behind him (he was relieved to find that it was Argenti, just as it should be. Behind Argenti, at the end of the rope, was Cairn, who suddenly felt something grab at him from behind, pinching him hard. It was another of these misshapen, bug-like creatures.

The real Crock Jon, for his part, was alone at a tunnel crossroads. One of the creatures had grabbed him through the moss, and (true to form) the old prize-fighter grabbed the thing back. The two were wrestling, and the bug-thing was losing. 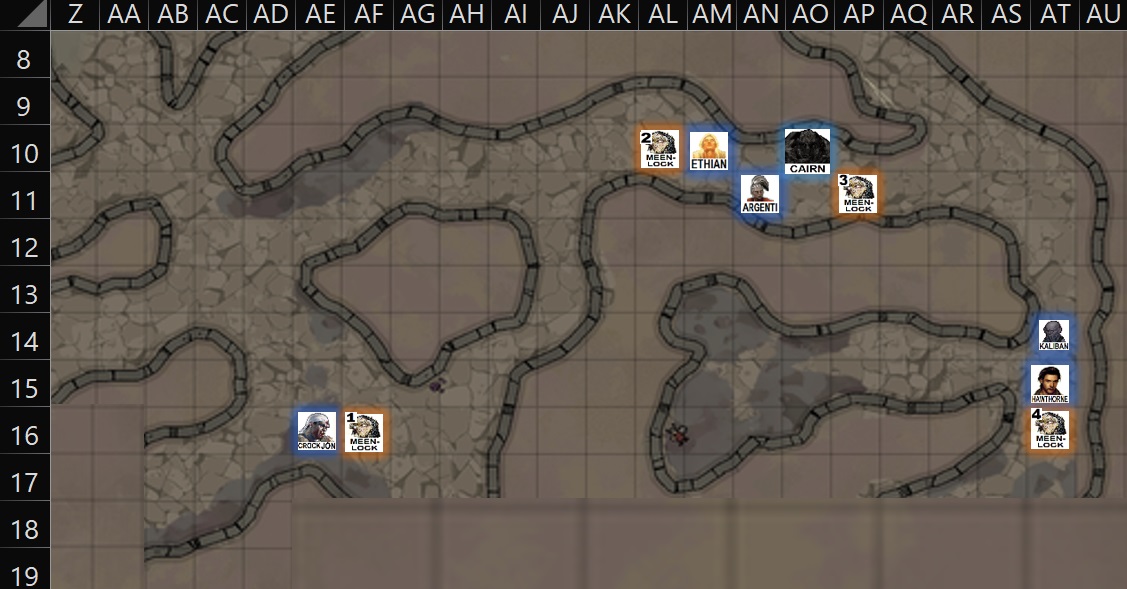 Cairns different physiology and mind easily repel whatever toxin or magic the creatures touch infuses him with. And while he feels the fear for his existence, he is a fighter first, coward later. Having Argenti right behind him helps as he is charged with her safety.

His arms morph into great battering rams as he swings toward the creature. Unfortunately, his choice of the morph was...not the best, fused arms require lots of space to swing. And now that he is in combat there is no time to separate them into shield and weapon.

"Do not worry, Argenti, this one agent will protect you." he rumbles

It is now clear to Ethian that these creatures are foul. "there's a meenlock in front of me!" he tells his companions as he strikes the one it with his sword, invoking elven battle magics.

Crock Jon, all alone, squeezes the creature he holds. The sound as it coplains is familiar -- another meenlock.

He calls out, "Watch out! There are creatures that wish us harm!" but if his voice is heard, it surely comes from the wrong direction.

With a fist he attempts to pummel the creature he holds, but he can't connect, no matter how hard he tries.

Kaliban's words trail off as the creature leaps from the moss towards Hawthorn. The gnome moves forward to support the man. He slashes out with his sword striking once and scoring a hit against the creatures thigh. He then quickly flicks the blade up trying to catch the creature off guard but it stumbles back out of the way.

Kaliban raises his shield and prepares for any counter attack.

Supporter
As Kaliban moves up to engage the green fey creature, Hawthorne realizes the trouble they are in. A wave of fear tries to overtake him, but he powers through it and immediately pulls out his rapier and moves adjacent to the meenlock so that Kaliban's attacks distract it and allow him to sneak a good stab in. Luckily, he just barely finds purchase and the thin blade slides into its side.

Argenti feels a shiver down her spine, but can't tell where the threat is coming from. "Cairn? Ethian? Where are they?"

In her fear, she lashes out at the moss next to Carin with her claws. "HYAH!"

Crock Jon struggled with his opponent. He managed to stop the meenlock from grabbing him with its pincher-claws, but he couldn't get in position to harm it. They struggled across the intersection, stumbling through knee-high moss and bumping into it with their heads and backs.

Ethian tried to stab the one in front of him with his sword, but the meenlock seemed to disappear into the moss and then popped out beside him, grabbling him with a vise-like grip that sent chills up his spine. Behind him, Argenti seemed to be panicking, pulling at the moss around her so that she could see. As the moss fell down in smelly clumps, she found the bare stone of the tunnel, and the sight of real stone seemed to calm her down.

Cairn slammed his rock into the ground with moss falling down around him. The meenlock wasn't there when he lifted it again. Instead, it was above him, clinging to the mossy ceiling. It reached for his head, but he sunk his rock-head into his shoulders, and it couldn't get a good grip on him.

Further away, but closer than they knew, Hawthorne and Kaliban both slashed solid cuts into their meenlock, who squealed a high-pitched scream that was muffled by the moss. It grabbed Hawthorne's arm, which went numb under the force of its grip.

Having failed to subdue Hawthorne, the meenlock in front of him and Kaliban faded into the moss and disappeared.

Supporter
"OH, COME ON!" Hawthorne shouts, as the meenlock disappears into the shadows of the moss. "All right, hang on--" he says, and he closes his eyes and focuses on the sounds and echoes throughout the tunnel, trying to get a sense of either the fey creature, or their allies.


As the sounds of the others in the tunnels make their way towards him and his svirfneblin ally tied to him, he opens his eyes and points in the direction he thinks can lead them forward to at least somebody. "That way! Let's go that way!" 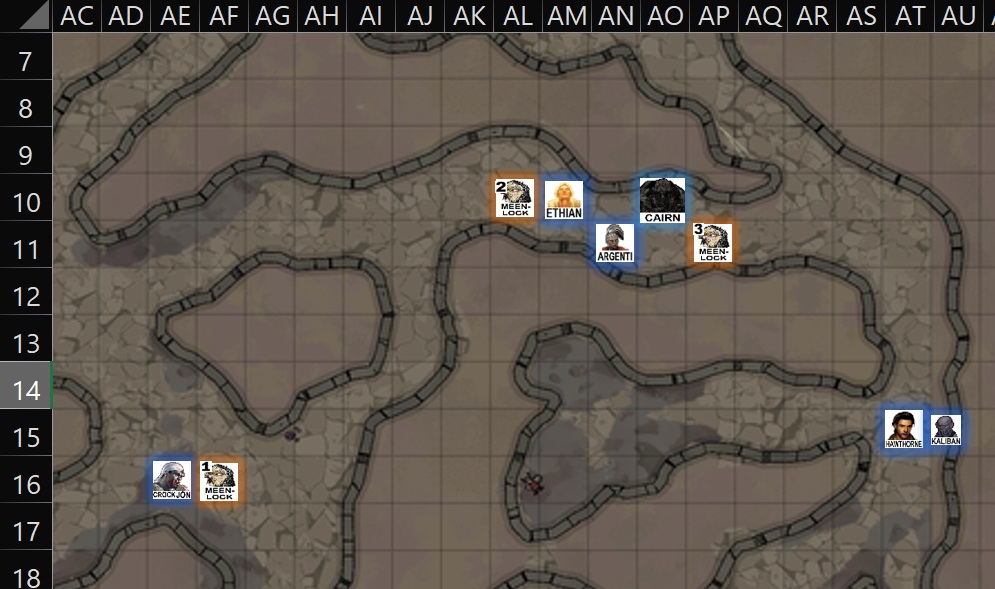