Beadle & Grimm's Legendary Edition of Curse of Strahd: A Review

From the start, Beadle & Grimm's has set a high standard for their luxury editions of D&D adventures. With its Legendary Edition of Curse of Strahd, they just exceeded those standards, and I don't say that lightly. To explain why, let's start with the box. 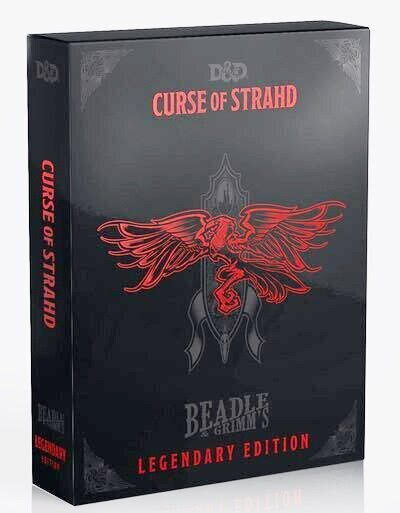 No, I don't mean the product box. That is a gorgeous glossy black with a blood-red-and-black embossed design and lettering, and a red interior. It's also heavy because it's packed with the many components of this set.

The box I actually mean is the shipping box, which is over-sized because in addition to the actual Legendary Edition product box it also contains a 25-inch tall, 4-inch diameter custom poster tube to hold the maps as well as padding to ensure that both arrive safely. Packaging the maps in their own poster tube is impressive, but it's also practical since the Legendary Edition contains 38 color maps, printed on heavy, textured paper, and scaled so that they can serve as battle maps. 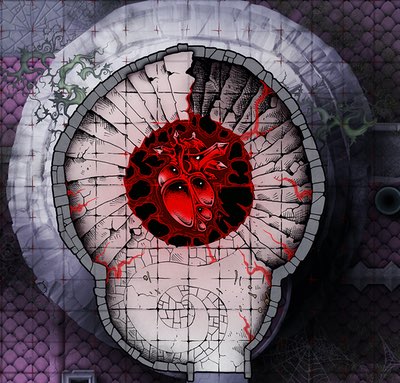 Those over-sized maps don't just reprint the ones from the original Curse of Strahd. Mike Schley's maps for the Wizard of Wines, Death House Basement, Coffin Maker Shop, and Church are included, also scaled up by Schley for this set. The other 33 maps include Jack Badashski's maps for every inch of Castle Ravenloft.

A full map of Barovia by Devon Rue completes the map set. In addition to these over-sized maps, LEoCoS contains a folder containing reprints of all the maps in the book so they can be easily handed out to players. The poster tube also contains two Barovian deeds of property, rolled up and tied shut with twine, ready to be handed to your players.

And that's just the start. As with prior Beadle & Grimm's D&D sets the content of the adventure is divided into five lay-flat versions that are easier to manage behind a DM screen. Speaking of a screen, the exterior art was commissioned specifically for this set and Sidharth Chaturvedi is appropriately moody and epic. The inside of the screen has a map of Barovia, random encounter charts, Barovian names, a key reference to the book, a chart of the areas by level, and a list of NPCs with key details as a handy reference.

Another staple of B&G sets is their encounter cards, with art on one side and DM information on the other so the card can be hung on the DM's screen. LEoCoS contains 61 encounter cards plus 17 double-sided art handouts so you don't have to hold up a book while hiding confidential information. Since Strahd is both the entire reason for the adventure and his presence overshadows everything in Barovia the vampire gets his own extra large, black encounter card.

B&G also created and includes five pre-gen characters – a ranger, a rogue, a paladin, a cleric, and a warlock. Four new supplemental adventures give your players additional ways to explore Barovia. “Hunger of the Wolf” requires teamwork to stop a group of werewolves. “Scout Party” involves saving a kidnapped child from scarecrows. “The Third Gem” addresses a question many DMs have wondered after reading CoS. “Tarokka Too” demonstrates how power can cut both ways. A full set of Tarokka cards is also included in LEoCoS. 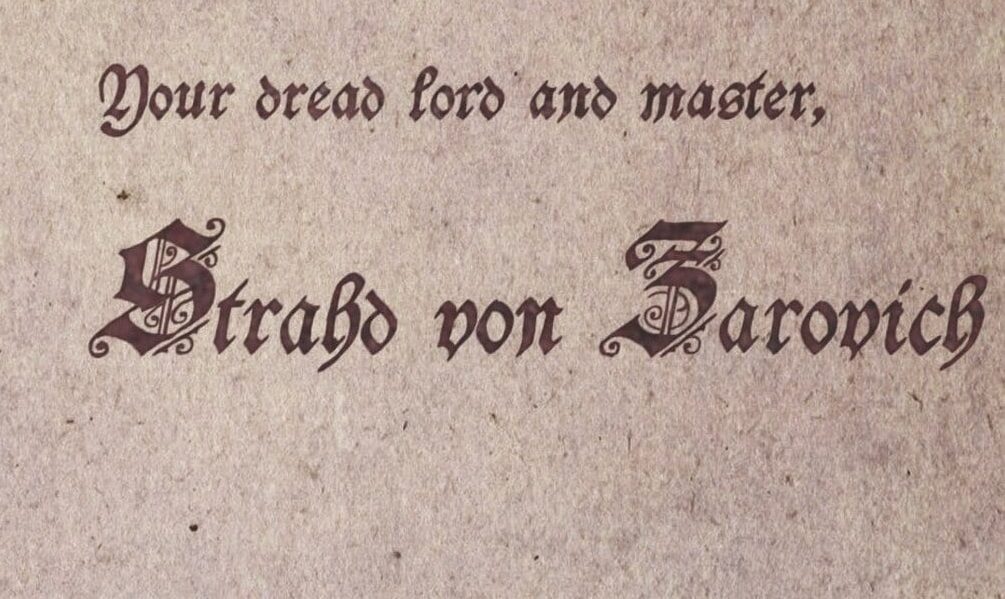 Another thing B&G is known for are their original handouts, in-world items, and artifacts. LEoCoS doesn't disappoint. In addition to the deed scrolls I already mentioned the set includes a flyer for the Festival of the Blazing Sun, wine bottle label stickers, journal pages, excerpts from Tome of Strahd, Strahd's invitation to dinner, fancy paper and envelopes, and even wax seals. To aid the DM while roleplaying that dinner you're given information that can be used for dinner conversation with the vampire, gleaned from B&G's own CoS play-throughs. 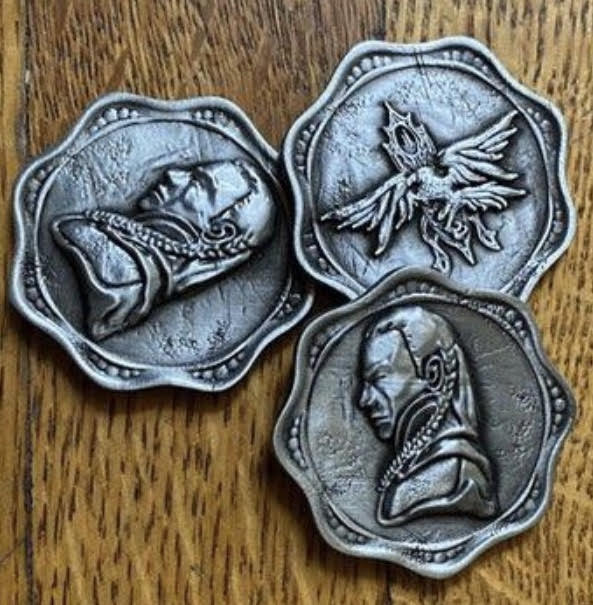 As for artifacts – wow. Three metal Barovian coins with Strahd's face on one side are packaged in a velvet pouch with an embossed raven. The holy symbol of Ravenkind is beautifully designed in metal and heavy, much like the amulets in prior sets. But what really impressed me was that they made finger puppets to go with the Blinsky's Toys part of the adventure. 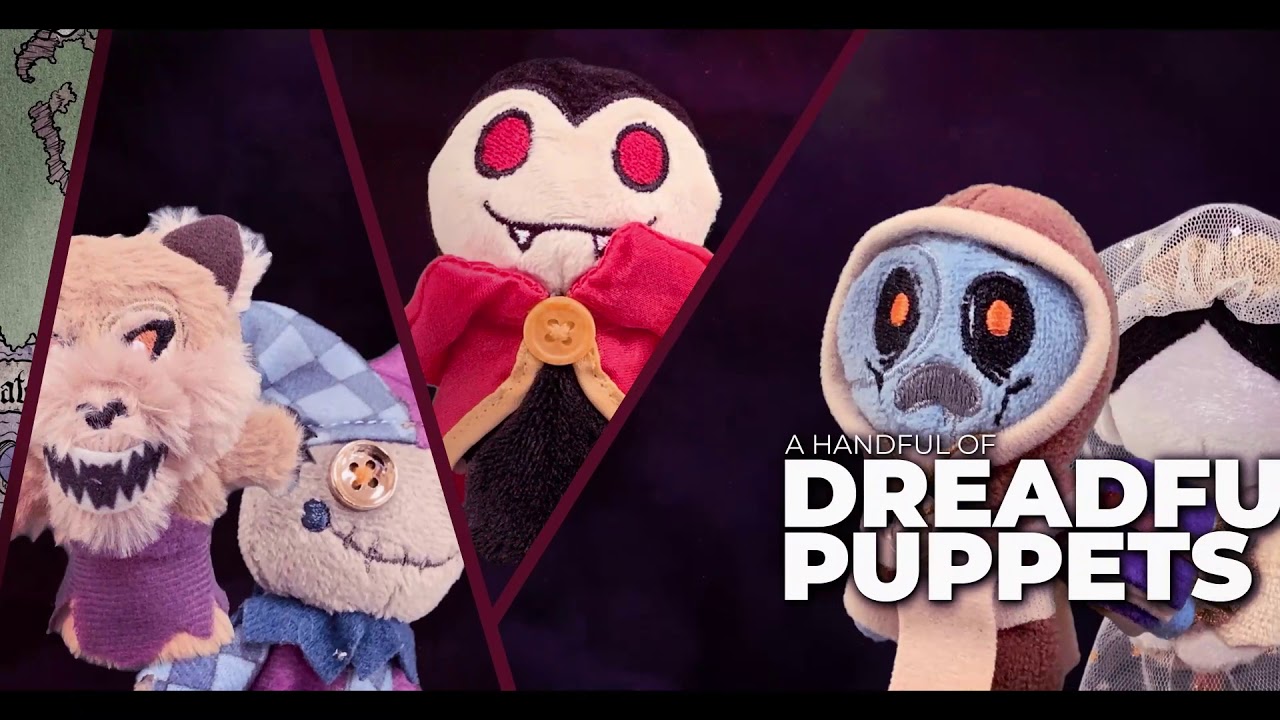 The idea was inspired by a conversation B&G's designers had with D&D staffer Chris Perkins who talked about a Strahd hand puppet Holly Conrad had made for him. The five finger puppets are equal parts cool and creepy. The Faceless Bride, Werewolf, and Marionette Jester all echo the adventure and the Strahd finger puppet is just required. The last one – the Zombie Cleric – is included as a way of teasing the party's cleric.

The finger puppets are smartly designed and well made. Strahd has a small satin cape like a classic vampire and a cute face that the dark lord of Barovia would probably hate. The Zombie Cleric has a tiny, shiny holy symbol on its chest, the Faceless Bride has a sparkly veil. The Werewolf is soft and fuzzy. The tiny bells on the Marionette Jester's hat ring. It's that kind of thought and creativity that earned B&G its excellent reputation and ups the ante from their normal sets to this legendary one.

This is the first “legendary edition” at Beadle & Grimm's, and it lives up to its name. Beadle & Grimm outdid themselves. The only reason I hesitate to label it a “must buy” for Strahd fans is the price. The $399 cost is hefty but understandable due to the details and quality of the components. Still, that's not in everyone's budget, and it's not intended to be. For Curse of Strahd Revamped, WotC's deluxe version, the equation is easier. Combine the MSRP of the actual CoS book plus the cost of the Tarroka deck, and you're already in the ballpark of CoSR's $99 MSRP so if you're buying the adventure for the first time and also want the deck, it's a no-brainer.

For LEoCoS it really comes down to your budget, your interest in the CoS adventure, and if you'll be playing face to face to show off all of its well-crafted pieces. If Beadle & Grimm's sets are an option for you, the Legendary Edition of Curse of Strahd is sure to please. Since the original print run sold out quickly (the second print run starts shipping this month), it has both interest and demand --- and I can't wait to see what they do for their Silver Edition of Von Rickten's Guide to Ravenloft, which is accepting pre-orders now.
Last edited by a moderator: May 4, 2021
Click to expand...

Those would be awesome to see for sure, ToA and Phandelver!

Wednesday at 4:38 AM
MonsterEnvy
M
B
A Peek Inside Beadle & Grimm's Van Richten's Guide to Ravenloft Shadowy Silver Edition