Great Old One or Outer God? That’s not what we’re determining here with the Black Goat of the Woods with a Thousand Young and instead I’ve conjured some statistics for the dubiously named Shub-Niggurath! 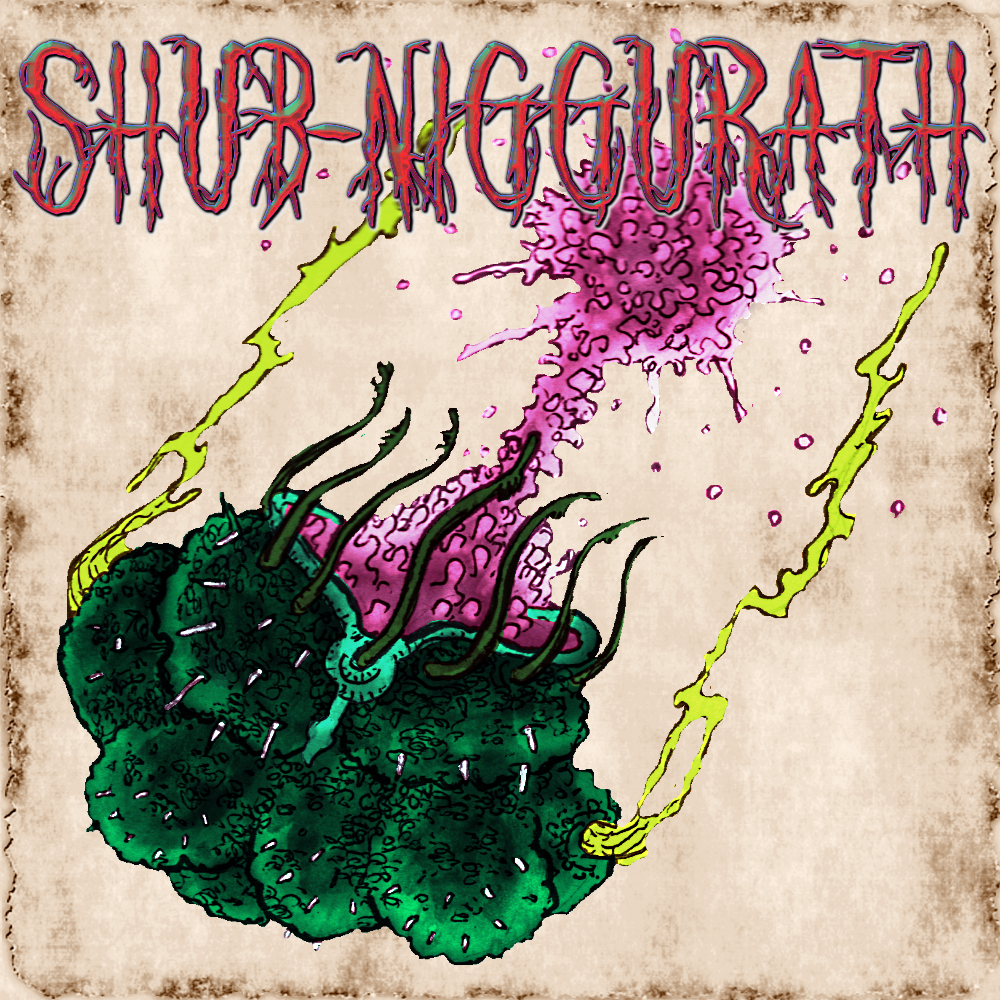 The All-Mother only got mentioned by H.P. Lovecraft in incantations, expanded upon later under the ghost names he wrote for or inside of letters. As the Mother Goddess she bred with Yog-Sothoth to beget the evil twins Nug and Yeb, and she mated with Hastur bearing forth Ithaqua, J’Zaha, and Zhar--and maybe Yig too but it’s unclear if that’s a certainty. There’s also a strong association between Shub-Niggurath and a Black Goat but whether that’s an avatar, Satan, or Pan is for scholars to decide. End of story: she’s an evil fertility goddess that in some instances sides with humankind and receives more worship than anybody else (among humans and otherwise).

Design Notes: This is loosely based on the lesser spawn from Pathfinder #46: Wake of the Watcher with some original bits thrown in (my take on Shub-Niggurath’s Immortality, for instance, and Endless Spawn). Her actual CR cruises in at 28 by the DMG’s reckoning but I popped her up 2 because I figure the stream of extra monsters are a concern worth at least that much.

Immortality. When Shub-Niggurath is slain, her form shrivels and compresses in on itself before exploding in a wave of milky fluid in a 200-foot radius. Any creature that comes into contact with the milky fluid makes a DC 25 Constitution saving throw. On a failed save, it is transformed into a random creature of an equal or lower CR, or a creature with a CR no higher than its level. A transformed creature makes a DC 24 Wisdom saving throw, keeping its intelligence and memories on a success. When all of the creatures transformed by the milky fluid have died, Shub-Niggurath is resurrected.

Innate Spellcasting. Shub-Niggurath’s innate spellcasting ability is Charisma (spell save DC 24; spell attack +16). She can innately cast the following spells, requiring no material components:
Constant: freedom of movement, true seeing
At will: black tentacles, dispel magic, dream, project image, sending
3/day: suggestion, feeblemind, symbol, weird​
Insanity. Any creature that attempts to interact directly with Shub-Niggurath’s thoughts (such as via detect thoughts or telepathy) must succeed at DC 24 Wisdom saving throw or gain a long-term madness. When using her telepathy to communicate Shub-Niggurath doesn't activate this feature unless she spends an action to focus her mind on one opponent.

Legendary Resistance (3/Day). If Shub-Niggurath fails a saving throw, she can choose to succeed instead.

Magic Resistance. Shub-Niggurath has advantage on saving throws against spells and other magical effects.

Multiattack. Shub-Niggurath can use her Endless Presence and Frightful Presence. She then makes seven attacks: one with her bite and six with her tentacles.

Bite. Melee Weapon Attack: +17 to hit, reach 20 ft., one target. Hit: 26 (4d8+8) piercing damage. If the target is a creature it is grappled (escape DC 25). Until this grapple ends, the creature is restrained, and Shub-Niggurath can't use her bite to grapple another target.

Tentacle. Melee Weapon Attack: +17 to hit, reach 25 ft., one target. Hit: 22 (4d6+8) bludgeoning damage. If the target is a creature it is grappled (escape DC 25). Until this grapple ends, the creature is restrained, and Shub-Niggurath can't use the tentacle to grapple another target (although Shub-Niggurath has an endless number of tentacles).

Endless Spawn (Recharge 4-6). Shub-Niggurath births creatures that she can mentally command. These creatures are loyal to her and defend Shub-Niggurath with their lives. Roll 1d4 to determine the creatures she births: on a 1 she creates 2d6 gibbering mouthers, on a 2 she creates 2d4 chuul, on a 3 she creates 1d6 otyughs, and on a 4 she creates either 1d4 cloakers (if underground) or 1d4 chaotic evil treants (if above ground).

Excellent work. I'm reminded of the picture in the 1e DMG.

Against a company of archers with cold iron arrows she's toast. And then there's how Mostin killed Shvar Choryati - a 400d20 meteor from space. Thunder damage looks to be a weakness too.

One of my favorite mythos horrors. Thank you for sharing!

One of my favourite miniatures for this is the one from Reaper miniatures.

Hmm... shouldn't she have some Legendary Actions? Endless Spawn seems an obvious choice. (And if she's above ground, have her spawn evil Treants instead of Cloakers.)

You might want to give HP and AC for a grappling tentacle.

Quartz said:
Hmm... shouldn't she have some Legendary Actions? Endless Spawn seems an obvious choice. (And if she's above ground, have her spawn evil Treants instead of Cloakers.)

I don't believe 5E typically includes hit points or AC for tentacles. God bless the spellcaster that gets caught in one.

The only Lovecraftian horror in this series that has Legendary Actions is Nyarlathotep because as far as I can tell, he's the only one that's actually there. All the rest don't physically manifest in full on Earth (or the Material Plane, in this case) at any point except for him. Assign whatever Legendary Actions you like to these though

I like it! Id love to see a connection to her Dark Young and the cultists though but i'll construct that in my lovecraft mythos campaign.
Thanks for making these! My strong suit is general and grand story, no so much creating/balancing monsters so these are great to get a base!