I embarked on a seven-week long journey to teach 20 Boy Scouts about game design, and learned a lot along the way. Our third game was a combination of party game and video game: 1-2-Switch, which is basically a bunch of mini-games you play with the Nintendo Switch. 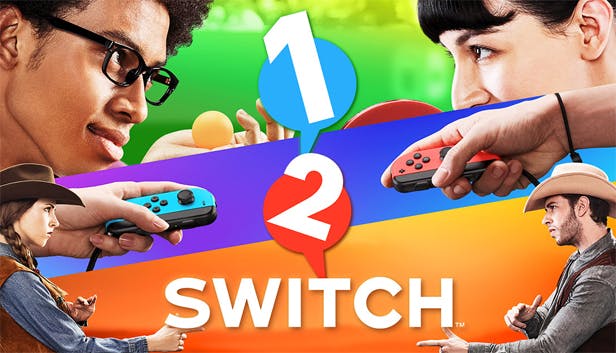 Here's the other articles in this series:
Here’s how 1-2-Switch works:
[h=3]Medium[/h] Electronic games present information to players through video screens and audio signals. Players interact with the games through electronic sensors. The Switch use motion control, vibration, and a motion camera to detect a player, which opens up the possibilities to make it both a physical game and a fun party game.
[h=3]Player Format[/h] Because there are just two controllers (called Joy-cons), the players compete in a head-to-head format against each other. In Team Battle, there are two teams sorted into red/blue, left/right, and the players are expected to line up and have one player from each time volunteer to face off against their opponent.
[h=3]Objectives[/h] Most of the 1-2 Switch mini-games are score based, but some of them involve avoiding a loss – the game ends when one player does something they shouldn’t, like the move controller at the wrong time or the wrong way. The mini-games are played on a virtual board, with two teams competing for points. They spin a virtual wheel each round to see how many steps they take, with each team choosing a player to compete head to head on wherever the spinner lands.
[h=3]Resources[/h] In 1-2-Switch, the resources are largely time. Players are competing before running out. There’s also damage in games where the players face off against each other, commonly known as hit points. The player’s coordination and ability to detect vibrations and other audio cues are also a resource.

Theme: 1-2-Switch has a variety of themes, from gladiators battling in an arena to wizards having a duel. Despite the more serious themes, 1-2-Switch emphasizes the fun part of the party game by making most of the characters look silly.
[h=3]Play Value[/h]Threat: 1-2-Switch is a party game, so it leans heavily toward friendly competition. This creates harmony by reflecting the rules of player-to-player interaction through competition. The game is meant to be a backdrop to start a conversation through competition. Competition motivates people to practice skills and think of different ways to succeed. A good competitive game will allow players to display their skills and ingenuity against players of a similar skill level.

Because 1-2-Switch is a video game/party game hybrid, it has some interesting nuances that set it apart from other games:
There are so many mini-games that there's quite a bit of variety, and playing the game again will virtually guarantee a different experience. In fact, I could easily see using some of these mini-games to supplement a role-playing game.

For bards, there's Air Guitar (strum to the beat of rock music), Copy Dance (copy each other's dance poses), and Dance Off (freestyle dance to a beat). For monks, there's Boxing Gym (throw punches at an opponent), Samurai Training (catch a blade with your hands), and Zen (holding the Joy-Con while remaining as still as possible). For rogues there's Safe Crack (turning a combination lock) and Treasure Chest (undo the chains around a chest). For fighters there's Sword Fight (sword combat). And wizards have Wizard (use gestures to cast spells with wands).

There's plenty of other games that are modern-themed or more mundane, from milking a cow to picking up a telephone. And of course, like Jenga, using these mini-games means relying on player, not character skill. Still, it could be a fun way to shake up a tabletop role-playing game, or even a live action RPG!
Last edited: Oct 29, 2019
Click to expand...

I don't mind video games with a focus on fun mini-games, but I really don't like 1-2-Switch. Not that most of the mini-games are bad, but you can't replay them without going back to the menu and picking the game again.