Removing alignments from monsters as I understand it is to say that no creature is biologically 'evil'. But is there a material difference between saying a race is evil and saying a race is homicidal?

I'm not sure I have a point to make, other than that I'm slightly confuised as I thought that was what they said they were going to stop doing? 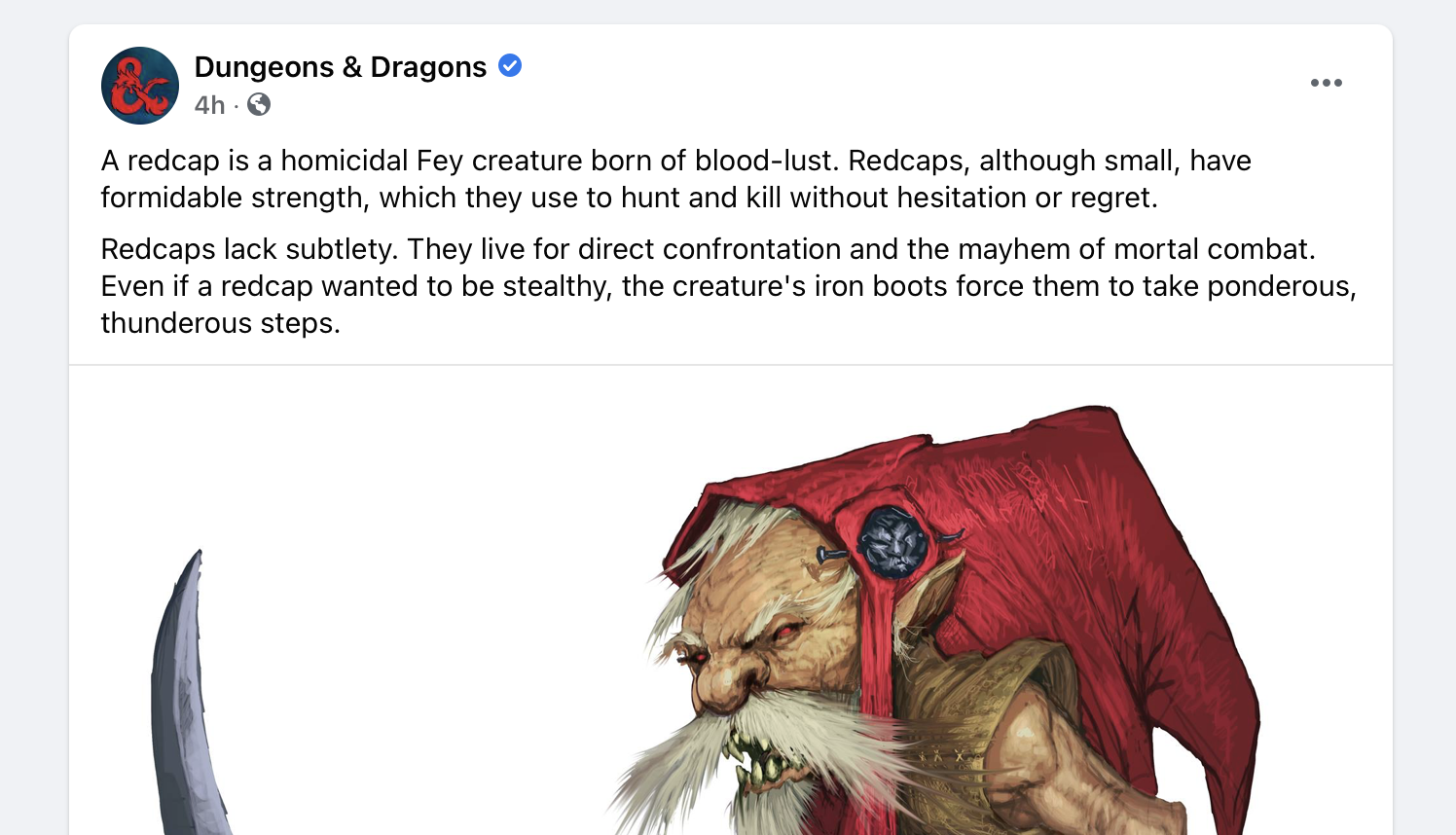 I'm not sure what wotc is doing, but I think the difference is in humanoid beings who have societies, especially those that are similar in organization and description to humans (elves, orcs), and those that don't so much. I remember at one point they described fey and shadowfell creatures as being expressions of a particularly strong emotion. In this particular case, redcaps have a magical faerie origin and are not a 'race' in the same way dwarves are, for example.

It's probably a question of how a redcap is created. These things probably spring up from the Feywild itself when someone commits murder. So they're not a biological race so much as a created entity, like elementals, demons, and devils. The trouble with biological races being evil is that they're also coded with decades of real-world racist tropes that target specific real-world cultures and people.

Malmuria said:
I'm not sure what wotc is doing, but I think the difference is in humanoid beings who have societies, especially those that are similar in organization and description to humans (elves, orcs), and those that don't so much. I remember at one point they described fey and shadowfell creatures as being expressions of a particularly strong emotion. In this particular case, redcaps have a magical faerie origin and are not a 'race' in the same way dwarves are, for example.
Click to expand...

While this distinction is plausible, it's not one Wizards has consistently drawn. If fey creatures can be described in this way without it being essentialist, what about satyrs and eladrin? How does one determine which monsters are creatures of instinct and which are creatures with authentic free will?

Of course, one could reasonably assume that the behavior in a given monster's entry is simply a default, and that variations and exceptions exist. But that was also explicitly the case with alignment, and it didn't stop people from finding it problematic...

Perhaps we may see some attempt to thread the needle on this subject in Fizban's (which is supposed to include alignments and default traits, but also exceptions to the norm, for dragon personalities).

It's perfectly possible to be homicidal and any alignment.

I can get on board with fey creatures being immoral and bloodthirsty and needing to be fought as monsters instead of PCs. Not sure how this would read if redcap was changed to orc or drow and if the plausibility that they are of a certain type would work. It seems that there needs to be an evil race, but it cannot be one that some associate with an Earth race.

Whilst I don't necessarily think these redcaps are super problematic, that's not why. I really don't think that it matters what the mechanical category is. The racist depiction of orcs wouldn't stop being problematic if they were classified as monstrosities instead of humanoids.
Last edited: Aug 9, 2021

redcaps are a (scottish?) mythical monster, if anything that description from wotc might actually tone down how horrible they were in myths.
edit: The caps were red because they were soaked in blood of their victims or those who fell in battle & the redcap would often die if it ever dried out. A non-homicidal redcap is almost a paradox since that would make it something else

I think redcaps shouldn't be a species, they should an organisation or subculture of gnomes. It's like a violent gang or cult in which some gnomes join. Then the biological essentialism angle is gone.

Hard to believe someone is really upset this creature is described this way. Shocking oversensitivity in my opinion.

tetrasodium said:
redcaps are a (scottish?) mythical monster, if anything that description from wotc might actually tone down how horrible they were in myths.
edit: The caps were red because they were soaked in blood of their victims or those who fell in battle & the redcap would often die if it ever dried out. A non-homicidal redcap is almost a paradox since that would make it something else
Click to expand...


Powrie (Red Caps) come from the Borderlands about the River Tweed (Tweed being an old Brythonic word for Border) between English Northumbria and Scotland. As a contested Borderland the area was unstable and subject to reivers and general lawlessness and thats reflected in the folklore where people sleeping in ruins and old castles tend to get murdered and robbed - most Red Caps are homicidal but the one in Grantully Castle would bestow good fortune on anyone who caught it. 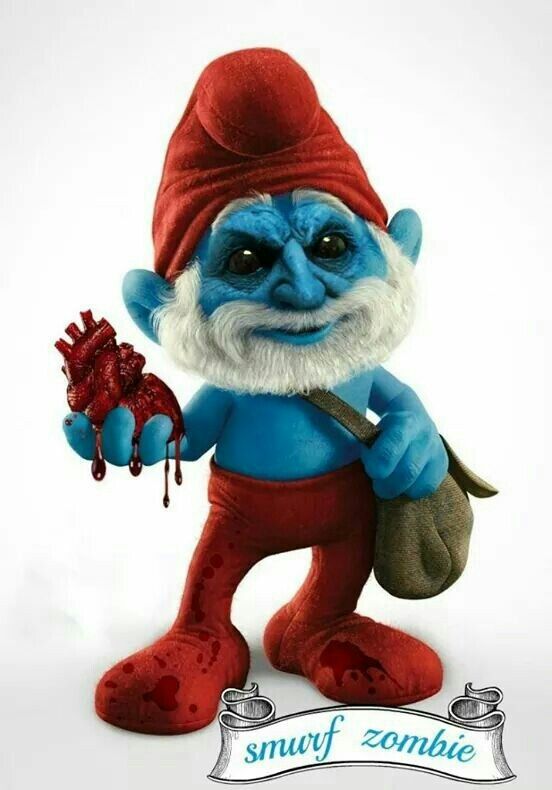 Dragonsbane said:
Hard to believe someone is really upset this creature is described this way. Shocking oversensitivity in my opinion.

I haven’t seen anybody upset. Who are you referring to?

Clearly, they should have just made Orcs and Drow be fey as well.

I think the more ‘alien’ the creature is the more comfortable I am with them being evil. After all a mindflayer simply does not care about it’s cattle any more than we care about a an apple.

But by any normal human morality eating brains of people is evil and the common races that can be player characters basically are humans in hats so anything along the lines of what aberrations, demons, devils and dark fey get up to is totes evil, I expect.

I know it’s subjective but a Red Cap is alien enough for me to be happy with it being hard wired evil.

Dragonsbane said:
Hard to believe someone is really upset this creature is described this way. Shocking oversensitivity in my opinion.

The first two images are from the antisemitic Nazi paper Der Stürmer. The second two are from American anti-Japanese propaganda. All four depict imaginary monsters. All four are racist. Racism doesn't depend on realness. In fact, some level of fantasy is a vital component. 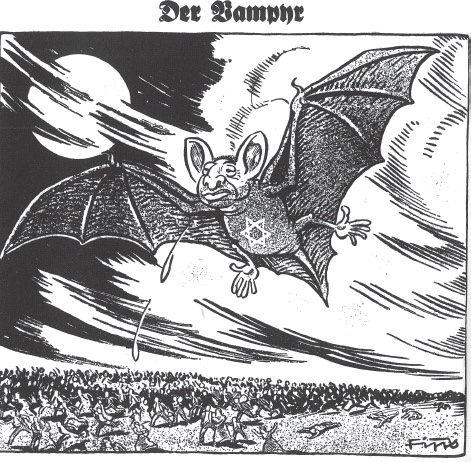 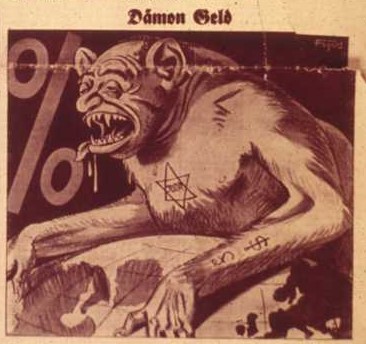 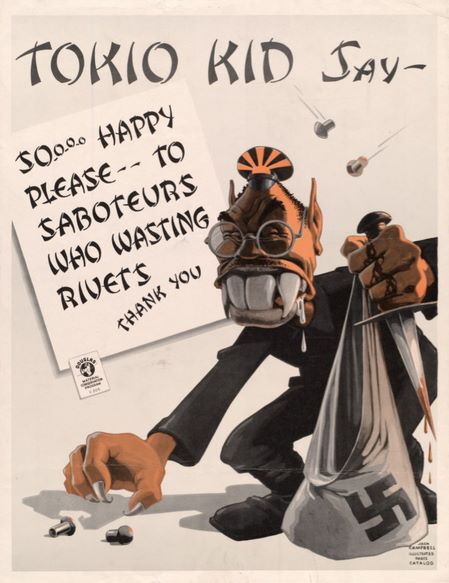 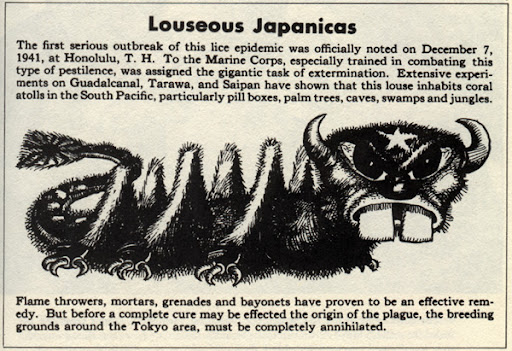 I think WotC is struggling with changing society and trying to figure out where everything fits.

When I grew up, orcs were evil, plain and simple. As a teen in the early 80's, I did not know enough of the world to think an orc could have any real-world equivalent or that someone could construe such a creature to be an analog for any real entity. Same with drow, elves, dwarves, etc.

Now, that's not our social awareness. Real and damaging analogies have been tied to these fantasy races.

But, D&D is still mostly a game about good heroes fighting evil creatures. At it's core it does not have, or frequently thrive very well, in a complex moral or ethical setting where the party should explore each NPC they cross paths with to determine how one should relate to them. (friend, adversary, kill...).

For many, their is still the desire to set aside the complications of the real world, and just role play some fantasy where one can do heroic and bold things, save the town/kingdom/world from evil, and not be troubled by nuance.

And WotC is struggling to maintain such, while recognizing that real-world bigotry represented in their fantasy fiction is harmful to real-world people. It is not a challenge I envy.

The myth of the Redcap arises from the atrocities committed along the Border between Scotland and England. Allowing the semi-allegorical embodiment of those atrocities to have the option to be heroic is problematic in a different way.

If we're going to say these creatures should not be inherently evil, then I believe we should not have them included in the game, as allowing them to be "ok" is sending a wrong message as well.

Has it been two weeks already? Huh, time really flies nowadays...I guess it is time for another "racial alignment" thread.

But yeah, I don't think this really counts. As others have pointed out, I think the differences here are (1) a redcap is a fey creature, not a humanoid; (2) it is formed, not "born", and (3) it is the physical embodiment of an evil act, not a society at large. A fourth point might be that a Redcap is not intended to be a playable race, but that's only tangent to the topic.
Last edited: Aug 9, 2021

Personally, I haven't seen online anyone offended by the redcaps being evil. I do feel that, with anything in life, some people will try to find a justification to be upset, or 'if you're changing X about what I like, then why not change Y and Z?'

It feels like a magnification of discussing things like 'What level/classes is Conan? Robin Hood? King Arthur?' Or even in game mechanics where people will say without a doubt mechanically a katana should be infinitely better than a longsword in D&D. Whether its true or not... just rule whatever at home.

Again, speaking for myself, I haven't had a NEED for orcs to always be evil for a long time. I respect that some people, in the games they want to run or stories they want to tell, do need that. But if I were to have a player come to me about a certain race meaning something to them, I would absolutely change or find a work around for it. YMMV