Lost Tales of Myth Drannor is an official D&D Adventurers League book containing six adventures for characters of levels 1-20. It is billed as a promo for Gen Con's 50th anniversary, although it will eventually appear on the DMs Guild -- from DDAL's Greg Marks: "It is a book that is a promo for GC50 and cons the admins are invited to. It will eventually appear on the DMsGuild."
​
Greg also added that "When initially released some are being distributed by BMG at Gen Con (I can't speak to how) and some by admins as promos" and that its appearance on DMsGuild would be "some months later.... PDF and possibly POD".

He added later that "I can't speak to what the BMG folks will be doing with their allotment, but the admins that are there will have some as well (myself, Claire and Alan are attending). The first print run of Super Secret Project 76 (not its real name) will be used by the admins as a promo item that we hand out at cons we go to (an actual book is a pretty awesome promo!). It will eventually go up on the DMsGuild as well, though not immediately. I will continue to tease more info on my twitter (@Skerrit7h3green) up until it is released on August 17th." 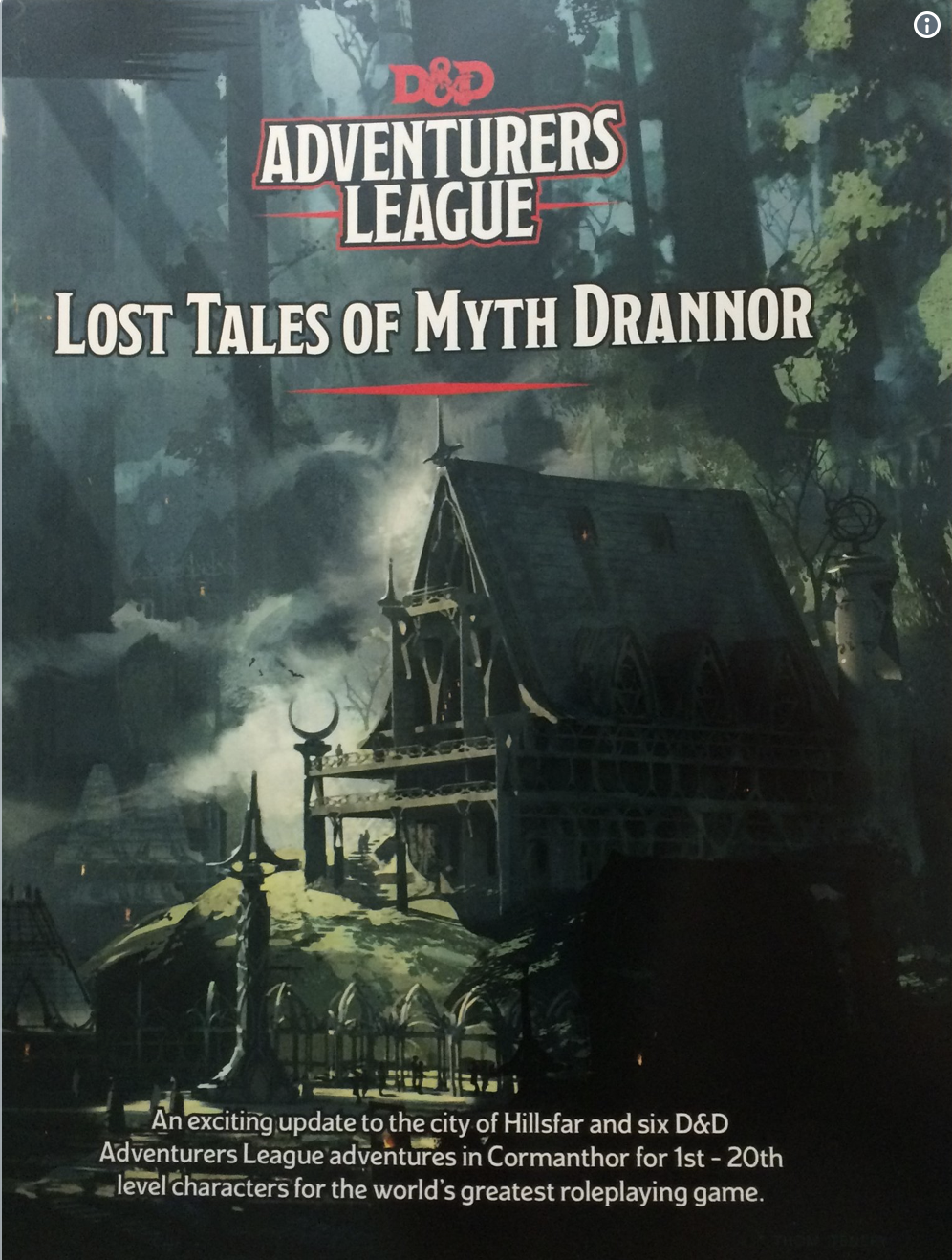 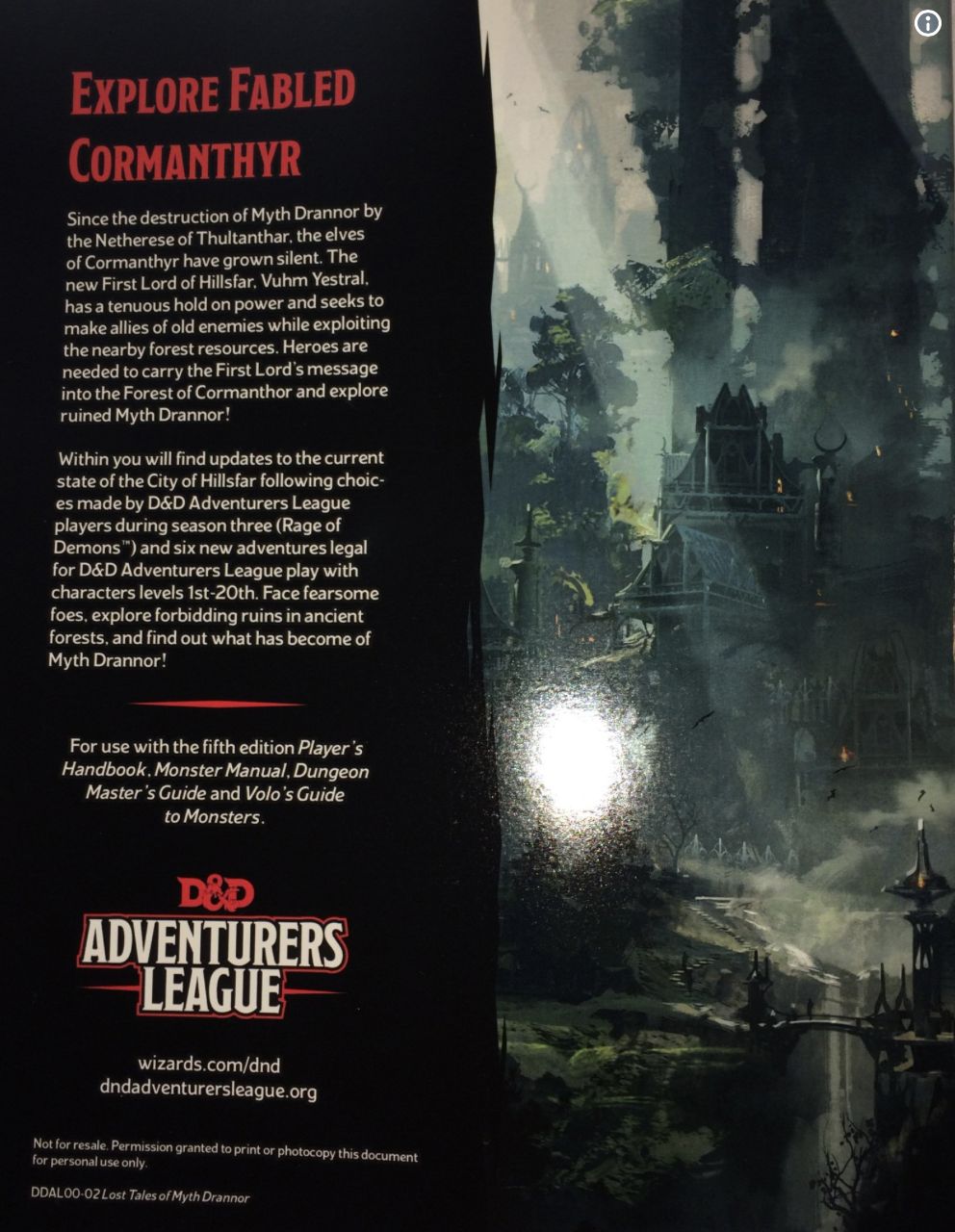 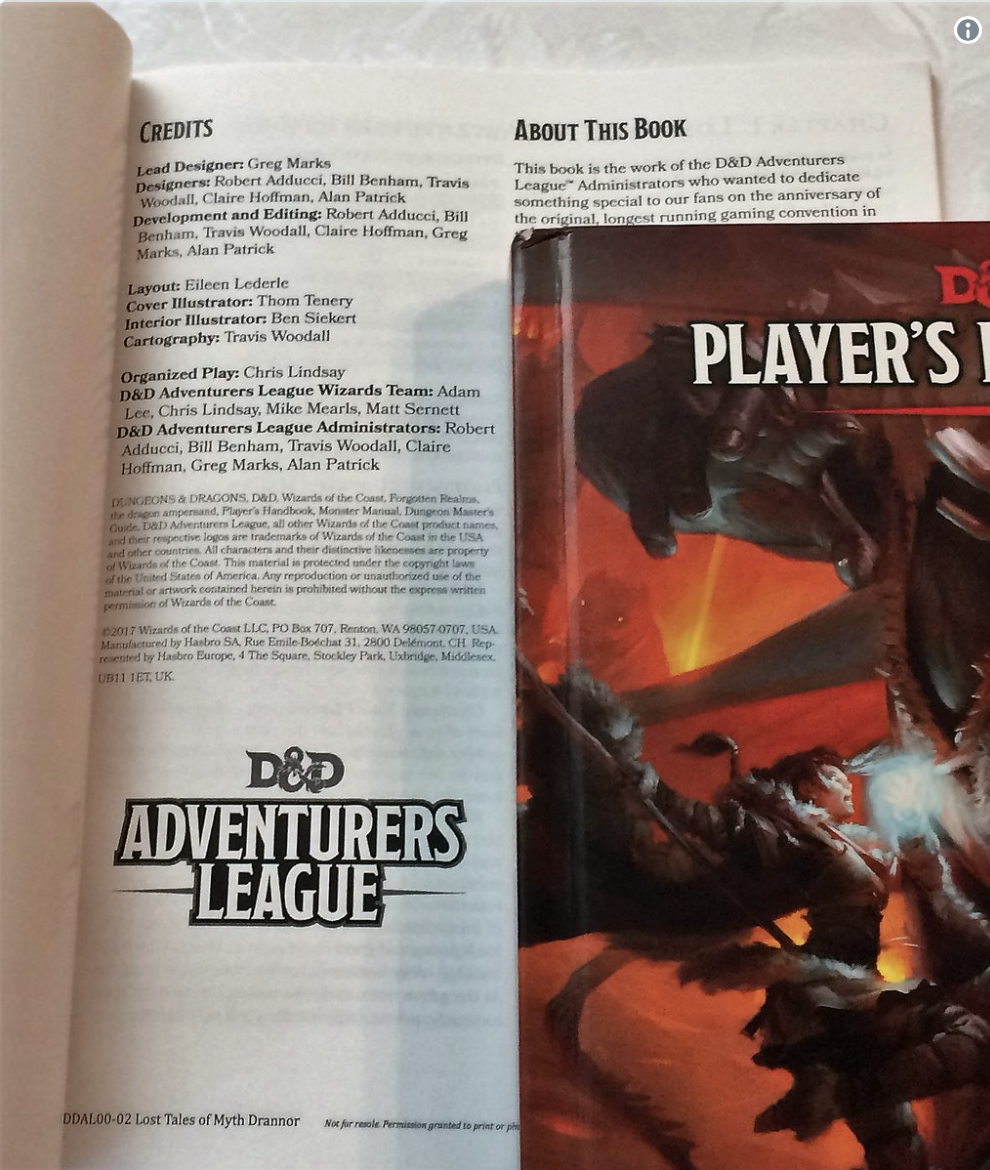 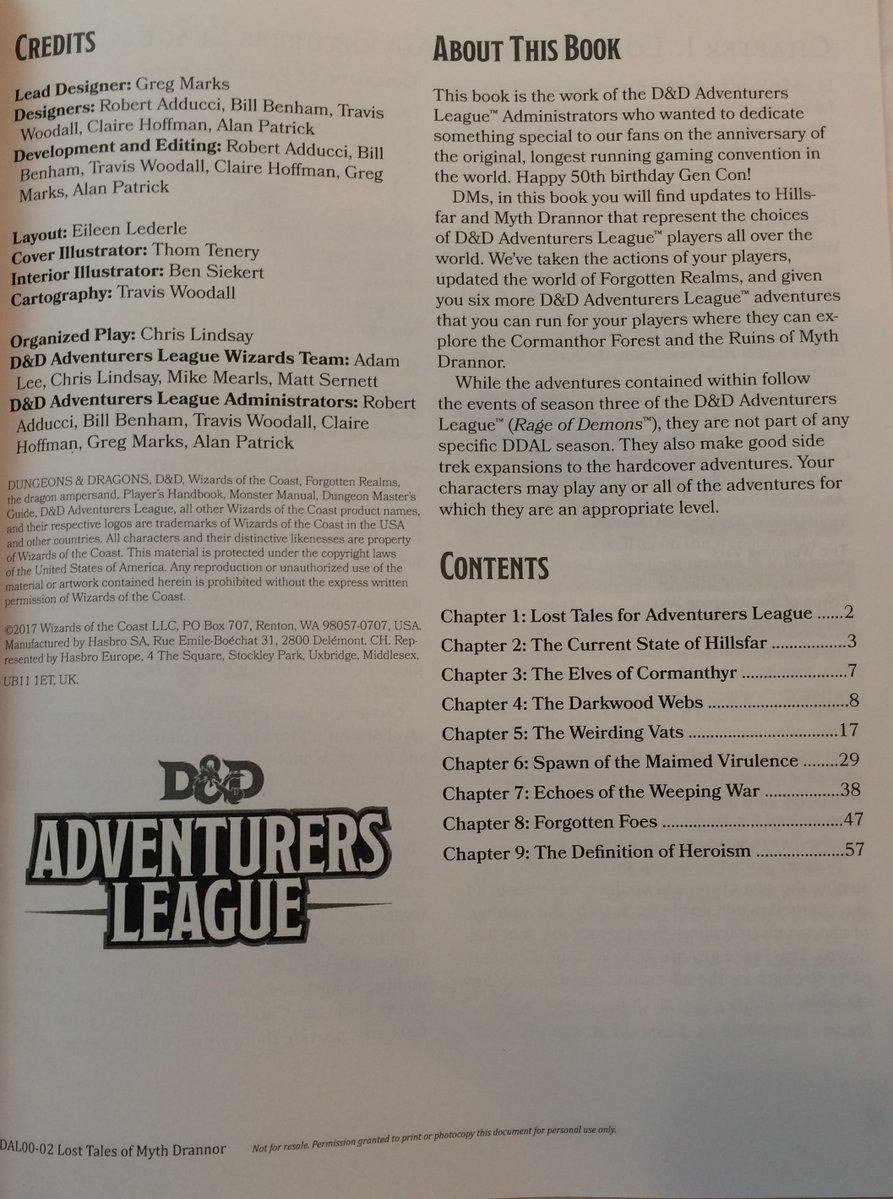 And there's a LOT of them sitting in boxes at Gen Con this week! 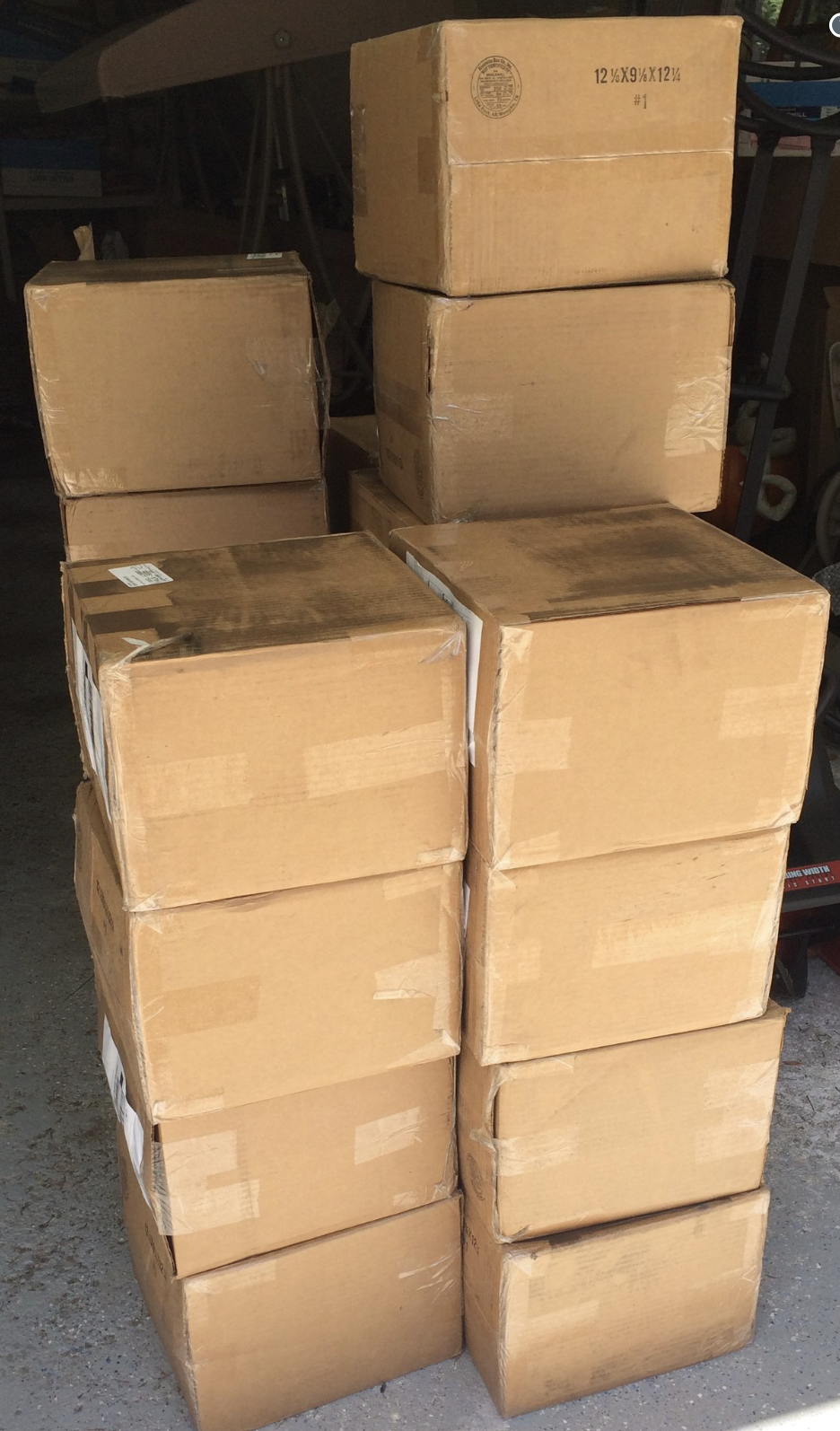 Giving out free adventures at GenCon is okay, but putting them in the Guild later is great. Especially if they're PoD.

People printing their own doesn't make getting it as a rare exclusive less cool. Getting one at a con is still exclusive and exciting. But people who couldn't make it to a convention due to work or family (or losing the GenCon housing lottery) aren't losing out and forced to troll eBay.


Or living in another country...

Zeromaru X said:
Or living in another country...
Click to expand...

Or across the ocean...

skerritthegreen said:
WOTC donated the cover art and IP at no charge, but truthfully they never budgeted for this so I wouldn't expect them to pay anything. We are grateful that not only did they give us Myth Drannor, but they even gave us the beautiful cover art. This was an idea the Admins a bit last minute, so we asked if we could do it and not only did they say yes, they actually gave us a more valuable area to play in than we requested because they were so supported and happy with our initiative.

As for if we will recoup anything from the DMsGuild, we haven't decided. Its possible, but we might also put any profits into an account so we might do something like this again in a few years when we build up enough money. Once we work out the possibility of POD, we'll decide what happens with anything else after that.
Click to expand...


Is this Lost Tales of Myth Drannar Canon or Fanon?

gyor said:
Is this Lost Tales of Myth Drannar Canon or Fanon?
Click to expand...

I thank you for not saying "cannon or fannon"

CapnZapp said:
I thank you for not saying "cannon or fannon"
Click to expand...

I'm jobless and my car was recently stolen so, I won't be making GenCon this year but, I just wanted to let you admins all know that this was a really nice gesture on your part. You all really go out of your way to help the community and especially you Skerrit, have always taken the time to answer questions about Adventurer's League. To work so hard in what you all do and be able to have this wonderful Myth Drannor book for GenCon is just leaps and bounds above anything we expected.

Thank you for contributing so much to the community. Having organized and played since Raven's Bluff and Living Greyhawk I personally feel that AL is one of the reasons 5E is so popular now. Not to mention accesible. You admins had a lot to do with that especially taking all of our feedback to make many positive changes as the seasons went on. It's improved gameplay greatly here in Madison, Wisconsin.

Looking forward to the future of AL and D&D!

Again, will the book be Canon or Fanon?

gyor said:
Again, will the book be Canon or Fanon?
Click to expand...


I imagine it will be as much canon as other AL materials. WotC has to sign off on that content, as I recall.

Warmaster Horus said:
I imagine it will be as much canon as other AL materials. WotC has to sign off on that content, as I recall.
Click to expand...


So limbo on that.

gyor said:
So limbo on that.
Click to expand...

Was it published by WotC? Nope, then the answer is no.
Is it legal for AL play? That's up to AL to state.

gyor said:
So limbo on that.
Click to expand...


I think it's safe to say that AL items are canonical within the context of AL. Therefore the tiefling Calypso is the leader of Phlan because the players at Origins said so and it got put into the story line. I think the mods are pretty careful to keep a consistent story going in AL from season to season. Whatever 'canon' means outside of organized play is pretty much whatever the DM says it is.

Er...there are those who will not be able to attend the GenCon...if so, how are we to get our paws on this book?!

mouselim said:
Er...there are those who will not be able to attend the GenCon...if so, how are we to get our paws on this book?!
Click to expand...

They said it will be put up on DMs Guild at a later date.

mouselim said:
Er...there are those who will not be able to attend the GenCon...if so, how are we to get our paws on this book?!
Click to expand...


You scour eBay (like I will be doing), or you wait for it to appear on DMs Guild in a few months.

They said Admins might bring some to cons they attend. Might have some for Nuke-Con. I do not know for sure at the moment. But I haven't gotten a no. Do you have a nearby con where some of the Admins are attending?

And yes they are working on POD for dmsguild.

skerritthegreen said:
Yes, I've heard that and many variations. Unfortunately this is something the admins did (and paid for) on their own. So comparing it to Paizo isn't really the same thing. Sadly none of us (the admins) are wealthy and we simply couldn't afford to make one for everyone in the world that wanted one. Its not that we don't appreciate everyone everywhere who participates in AL, we certainly do, its just that we didn't have enough money between us to pay for it. We especially wanted to commemorate Gen Con 50, so that's why the focus there. We will also wanted to use the leftovers to hand out at shows that the admins attend over the next few months because we know its expensive to bring us to shows (again, none of us have much money and we don't get paid to go to shows, so when we come, its at great expense to ourselves). The easiest, and probably most cost effective, way to get it to everyone however is to make sure it goes up on the DMsGuild, so we're going to make sure that happens.
Click to expand...


Thank you for this explanation.

My first reaction, when I heard about this project a while back, was annoyance --why do admins, and the highest-profile cons, get yet another exclusive thing; why do con attendees (and certainly folks that are more connected in the AL world than others) get first access; why do all the rest of us plebes need to wait _months_ to finally access new content --which will no longer be new-- on DM's Guild.

But the context that 1) it's a special surprise for GenCon, specifically the con that started it all on its 50th anniversary; and 2) that it helps provide a benefit to bringing admins out to cons, which helps offset the high cost of attendance for the admins; is totally reasonable. In fact it makes it not annoying at all, and something I'm 100% supportive of.

It'd be kind of cool if those facts were part of what I first heard about it, instead of "hey here's this super-cool secret thing that you won't get to enjoy until it's old news because it's only meant for the cool kids". But not really a big deal. And again, thank you for the more in-depth explanation here.

Please tell me there is an updated map of the Hillsfar area with the Stop and other notable AL sites included. I don't understand why WotC hasn't commissioned a Moonsea area map with all the stuff that has been centred around there. If there is a map in this product, would there be any way you could post a pic of it?