[LPF] About a Cow

Autumn's warning gives Arradon scarcely a second to brace for the coming assault. As the kyton's dark magic courses over Arradon's body, small cuts bloom where the foul energies touch exposed flesh. Arradon's vision begins to blur. I'm losing too much blood. He makes an attempt to slash at the vile creature, but his blurred vision causes his attack to go wide, and the kyton easily floats around his strike. Not taking his eyes off the creature he calls out to Aelspeth. "Nethig, alistan an manen anann ledhatha. Gwannoch!" His voice is uncharacteristically shaky and tinged with desperation, any hint of levity is gone from his person.
[/section]

[sblock=Elvish]
"Little sister, I don't know how much longer I can continue. Flee from here!"
[/sblock] 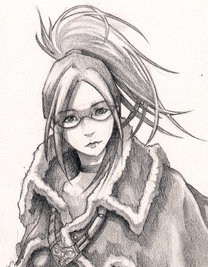 Aelspeth sees blood pouring from so many wounds on her friend and steels her resolve. She draws another arrow and lets loose at the roiling mass of metal and murderous intent before her. Unfortunately, the plates covering the augur kyton's body shift and deflect her shot once more. The swinging chains pluck the arrow out of the air as it falls, and then constrict in several places, snapping the shaft like a carpenter's pencil. Her own fear for Arradon spikes when his voice breaks. He's always been so sure, even when death's eyelashes brushed his own on the Sea Sprite. We can't lose him in this place!

"Strike true, Arradon! Now!" Aelspeth turns her head to Autumn, eyes pleading. "Save him, Foxfire! Use every charge in that infernal wand if you must!"

Why can't I roll anymore?![/sblock]

Autumn attacks with stunning efficiency and cuts down the lone kobold in the lower room. Arradon has considerably less luck, as his wounds mar his attack causing him to miss the kyton. And Aelspeth’s arrow is again shattered before it reaches its target. The kyton seems to be getting desperate as its chains flail wildly. It is sheer luck that a chain strikes Arradon and inflicts a bleeding scratch. His other wound continues to bleed and his face pales. Though he is still standing he looks like he could pass out at any moment.

Erin slashes at one of the kobolds and deals it a wound that is just enough to drop it. Two still remain facing against her and they shuffle around to get to the best position. They both attack but only one manages to hit and that a bare scratch, if anything. 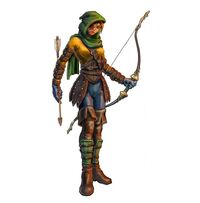 Autumn whispers in druidic to the wand, "Replenish". Pale green light travels from the wand to the ailing elf. "Arradon! Hold strong! Aelspeth, if you back out a pinch, we can share attacks with the silver dagger."

[sblock=OOC]If we are willing to risk some attacks of opportunity, we can share the dagger by dropping the dagger, stepping away, next person steps in, picks up, and attacks. Edit: Nevermind. The plan doesn't work if Arradon is staggered. [/sblock]

Erin slashes again at the kobold who managed to hit her, and tries to put it down before it manages another strike.

Sorry for the delay, work has been crazy busy!
[/sblock]

Arradon in invigorated by the healing from the wand. His bleeding stops, his wounds mostly scab over, and his bruises fade.

[sblock=OOC]Arradon, healed somewhat by Autumn, will get his normal round of actions.[/sblock]

His wounds soothed by the healing light of Autumn's wand, Arradon resolve returns. He attempts to mislead the kyton by faking a more defensive posture. "I could use some support." He discreetly makes a curving motion with his off-hand, indicating that someone should try to get behind the creature.
[/section]

[sblock=OOC]
I was going to try and pass the dagger if Arradon went down, but as it stands, we could try and flank the kyton so he can get some easy sneak attacks in to finish things. Or someone could head up top and see what the situation is up there.
[/sblock]

[sblock=OOC]Sneak would be best. But if we can't lure him out that's a problem. Maybe Merry checkout up top and I'll just keep healing you. It's not a problem getting back there if the thing moves.

GE, is table talk like this allowed or frowned upon? I'm cool with either way, just don't want to 'cheat'. [/sblock]

[sblock=OOC]I would rather you all do a little table talk and kill the monster than don't talk and end up dying because of it. There is a bit more I would like to say but I'll limit myself to this: anyone adjacent and threatening will provide flanking for Arradon and gain it for themselves as well. Also, the creature is tiny so you can cast spells while adjacent and it won't get an AoO because of its size. Dang it; I was only going to say the one thing.

Erin nicks one of the kobolds with her razor-sharp blade. The two kobolds continue their assault on her. She blocks one’s attack but the other uses the distraction by his companion to slip past her defense and score a long wound across her thigh.

Heedless of the battle above, Autumn heals Arradon of a portion of his injuries with some much needed magic. The bleeding wound along Arradon’s jawline seals and despite the blood streaked from jaw to his clothes he looks much improved.

Arradon attempts to feint but the creature doesn’t seem to fall for the trick. Aelspeth drops her bow in frustration; her weapon trainer would object to the abuse but things aren’t looking promising and Arradon could use her assistance. She draws her sword and shifts her position slightly to be in better reach of the kyton. Summoning her magics Aelspeth hacks up another gobbet of acidic phlegm and spits it at the kyton. Unfortunately the acid splashes onto the wall behind Arradon and vanishes a few seconds later.

Strangely, sparks fly along a half-broken chain where Arradon wounded the kyton earlier and the chain mends itself. The chain, sporting a nasty hook on the end, flicks out again at Arradon and catches the elf on the forearm and tears a small wound. Blood begins to trickle from the cut…

Sorry for the delay, all, I was hoping Merry would reappear & post.
Ealt, magical healing also heals non-lethal damage and eliminates bleed. Unfortunately, the new attack replaces the bleed condition.

As the kyton withdraws its chain from Arradon's forearm it tears away the already damaged left arm of his armor, as well as some kind of wrapping that was apparently underneath it, revealing an ornate tattoo on his upper arm. The tattoo is composed of numerous thorny vines with the occasional rose tastefully placed among them. This seems to enrage the elf, as he switches his grip on his dagger to an underhanded position and plunges it repeatedly into the blood-red eye of the kyton with both hands. The kyton's life blood spatters upon Arrradon's face during the assault, giving him an even more frenzied and unsettling appearance.
[/section]

[sblock=OOC]How far can I climb in one round? Would I be able to get a standard action off too, or is it a double move? In either scenario, how far in the room could I go after the climb?[/sblock]

[sblock=Climbing]FJ, climbing in normal circumstances happens at 1/4 speed. This means that it would be a double move to ascend the 15 ft wall (the slope is not a problem). Autumn wouldn't have any move left to move in the upper room after climbing and so couldn't move past the square at the edge. A typical wall is DC 20 to climb but the kobolds have battered the wall and added ropes and other handholds that will drop the DC to 5.[/sblock]

[sblock=OOC]Can I double the DC to move at half speed? What square would I land on? Could I take 10 since there's no baddies interfering at the moment?[/sblock]

[Sblock] I'm away from my computer right now I can't look that stuff up but I think it's -5 to the role. You'll have to check the map and count squares yourself. [/sblock]

[sblock=OOC]Posting from my phone. I apologize for the delay. The past couple weeks have been hellacious. Had to go to State Senate with work and still trying to wrap up personal stuff a little at a time. I tried to get online last night but hadn't slept in two days and just couldn't make it happen. I have family plans this evening. After I get my daughter to bed, I'll be catching up on all my games.[/sblock]

It is to her great surprise that as soon as she clears the ledge she witnesses Rak'tan on the ground, but also another tielfling, female, engaged with the two remaining kobolds. Not wanting to take any chances, she nimbly darts through the melee and finds herself on the opposite side of the fight. Adrenaline pumping from the renewed sense of urgency, she unbecomingly calls out to the tiefling, "Friend or foe of the dragon folk?!" She waits for an answer as she anticipates an attack from one of the kobolds.

Armed:
Conditions: Light (on arrow in chamber), Bow and sword on floor E12

[sblock=Arradon's Tattoo]Is this a Harran yakuza type thing that Autumn would recognize? Or is it more personal?[/sblock]

Swinging her blade against the nearest kobold, it goes wide as she focuses her attention on casting a quick spell. Her ray misses the kobold easily. Cursing in Infernal, she reorients herself to try and deflect the next attack against her. "I'm no friend of these "things". I'm guessing we'll have more chances to talk once their dispatched."

[sblock=Arradon's Tattoo]
In my mind, all members of the thorn would bear some kind of thorn tattoo as a rite of passage/symbol of devotion. I'm thinking its reasonably common knowledge in the areas around the Harran , especially Rorn, where bearing such a tattoo would be a death sentance. Other than that personal embellishments would be common, with most tattoos starting simple and becoming more complex over time as the bearer adds personal touches. In Arradon's case, the thorns represent confirmed kills and the roses successful campaigns. So short answer, yakuza esque is not a bad description of it.
[/sblock]