MAD Magazine #10 has an article about "The Dopiest Demons in Dungeons & Dragons", and there's a preview on D&D Beyond. "These demons are, of course, not actually in Dungeons & Dragons, because MAD Magazine is not the most reliable of news sources. Instead, demons simply would be the dopiest if some player were foolish enough to will them into existence." 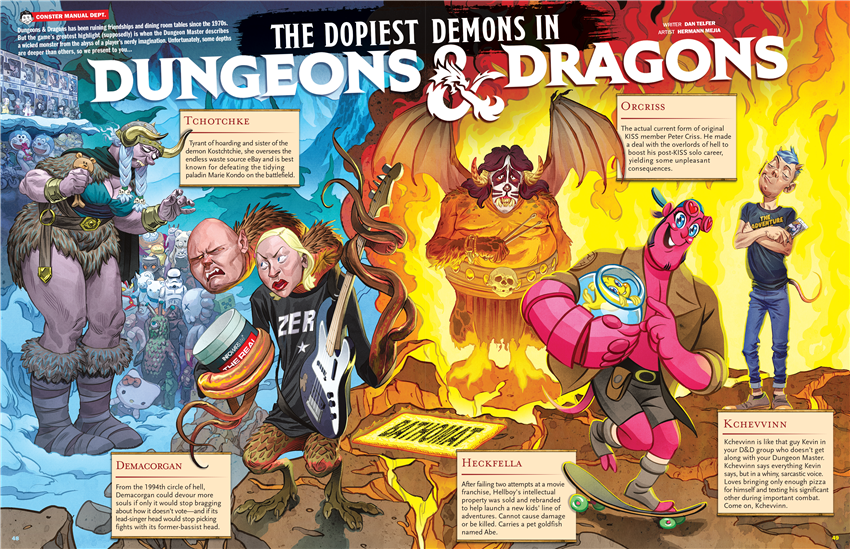 * You should worry seriously if Mad Magazine published an article about D&D alignment.

* What is the next, "my little pony" main characters as D&D centauresses PCs?

* It could be worse. D&D creatures as pokemons.

* I would be funny a crossover between Spelljammer, Star Wars and Star Treck in MAD magazine, with our superperfect heroine Mary Sue as main character saving the day.

OK, now I have to pick up a copy of this issue. The "Tchotchke" got me snickering. That's gotta be from someone who remembers oldschool Demon naming conventions.

Aaron L said:
The "Tchotchke" got me snickering. That's gotta be from someone who remembers oldschool Demon naming conventions.
Click to expand...

More like Jewish humor, which is normal for Mad.

LuisCarlos17f said:
What is the next, "my little pony" main characters as D&D centauresses PCs?
Click to expand...

Ponyfinder for PF1, it's a thing.

It could be worse. D&D creatures as pokemons.
Click to expand...

Iron Flask, Figurines of Wonderous Power, Bag of Tricks - and probably others - predate Pokemon by about two decades.

Oh absolutely, it's an oldschool Jewish Mad Magazine type of word, but naming a Demon type "Tchotchke" had me automatically think of Kostchtchie (plus Chasme and a few others.) It was a perfect blend.

Staff member
Quoting myself from elsewhen...

Alas, that thread has been 404ed. Damn shame, too, because ENWorlder weem did some cute visual realizations of some of them.

Edit: found it, but a lot of the images are no longer visible due to broken links and Photobucket’s new limits on free image hosting. The Bieberlith is still visible on p19, though.

I tried looking this up earlier, only to find that the EN World FAQ doesn't list anything above level 3. Fair enough...so I decided to look around the forums, record the levels that various posters had, and put together my own list. Hence, for anyone who's curious what the level breakdown is...