D&D General My Problem(s) With Halflings, and How To Create Engaging/Interesting Fantasy Races

Yaarel said:
Some of these dont make sense. Why would Hexblood be dexterous? Shouldnt the proritize a spellcasting ability? Or maybe be weirdly strong.

I guess the birds and the cats have it for balance and landings.

Kobold deserves Dex as a rigger of contraptions.

Goblins are hard to stat because the folklore makes them magical and dangerous but dim and comical. Wisdom as physical senses and relentlessness kinda makes sense.

If the elf exits the Dex scene, the halfling is the main contender for humanlike Dex stuff.
Click to expand...


It plays in with how kind of too broad dexterity is.

Gammadoodler said:
No, what I would say is, should we make them a subrace of dragonborn then? After all, the PHB says they are a lot alike.
Click to expand...


If we were in some bizzaro world where halflings were considered a lot like dragonborn, and they were the only race that that is said about... I would ask why they aren't kobolds, who are a far better fit visually for small dragonborn. Or start discussing how those could be combined, since they share some traits.

But, again, this is all some bizzare "whataboutism" that is postulating a text that doesn't exist all to argue a point that is considered pretty obvious to most people.


I can't even follow these arguments. "adoptees of other races" meaning what? That gnomes, goblins, and kobolds aren't being asked why they aren't a different race? That's because they have a lot of self-evident lore that makes them their own things. You could combine Goblins and Hobgoblins (I've done this actually, making them stages of life for the Goblin people). You could combine Kobolds and Dragonborn (I've done this too actually, making both "dragonwrought" races created by dragons to serve different purposes as general labor and soldiers respectively) and gnomes and elves (I haven't done this. I don't like it, but I could see it)

But the larger point was that "short" isn't a strong descriptor for a race. With how many "short races" we have, it isn't enough.


Also, you seemed to have no idea what was meant by "a positive attitude" as it had nothing at all to do with wealth or power. That was a fourth thing, that wasn't included in the post. Or my follow up complaint that the main point of has been ignored in favor of nitpicking the three things in the list (which was never meant to be exhaustive)

But it still remains, given a small list of "short + personality traits" you said "if you take away "everthing" that makes them different." The wealth thing even got added later, wasn't even part of the post when you said what you said. And that was what I was trying to highlight. Those things seem to be it. And they are easily reproducible with any other race, except for short when requires a few more specialized races.

Funny no one questioned this as you folks are all about honesty and all that.

5e hailing's DON'T HAVE HAIRY FEET. They aren't hobbits. So, cutting off the feet makes perfect sense SINCE IN 5E they don't have that.
Click to expand...

I'm sorry, are we to assume all artists must draw halflings according to the way they are depicted in 5e? That nobody can draw halflings because they were inspired by earlier editions, by OSR games, by Lord of the Rings and its RPGs, or by other RPGS that use halflings with furry feet, such as Pathfinder or GURPS (and Level Up, which while still in development has an entire halfling gift involving their furry feet)? Wow, maybe you start going to art forums to tell them that they're drawing halflings wrong.


Hussar said:
But, sure, if you choose images of elves that have thousands of positive reputation points and are considered among the top 20 or 30 of all images of elves on Reddit, then, sure, go ahead. Again, like I said, about 5 of those images are from Paizo (which does have hairy feet halflings). Not random Google image search stuff. I mean, I went to the r/ImaginaryHalflings site, clicked Top of All Time and picked from the top stuff, ignoring the stuff that was obviously pulled from The Hobbit and things that were too hard to crop.

We get taken to task for saying that halflings are too similar to humans. "NO THEY'RE NOT" is the oft repeated reply. "They at least as different from humans as any other race." Ok, prove it. You only had to pick two non-halflings out of 11 pictures. Many of which are held up as exemplars of what halflings look like in the game. Yet, everyone whines about "gotcha" and whatnot.
Click to expand...

I really don't care. Your pictures were clearly deliberately chosen to be vague. You could have picked this one: 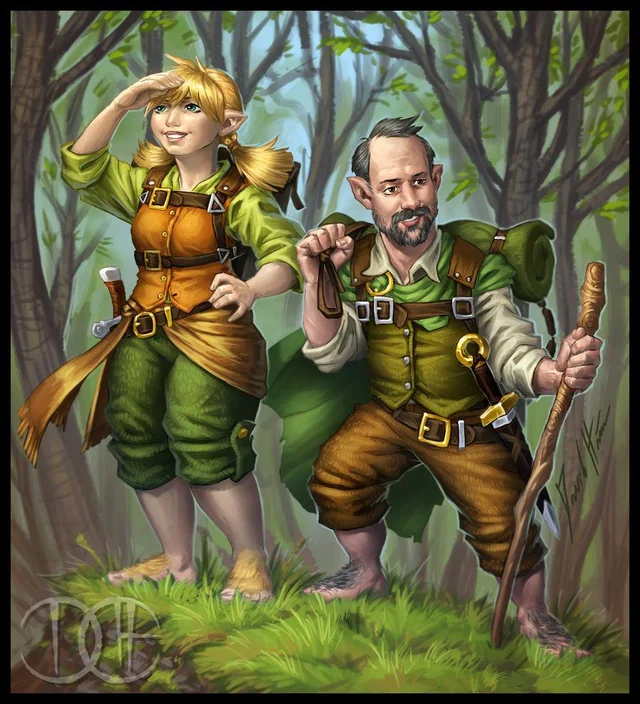 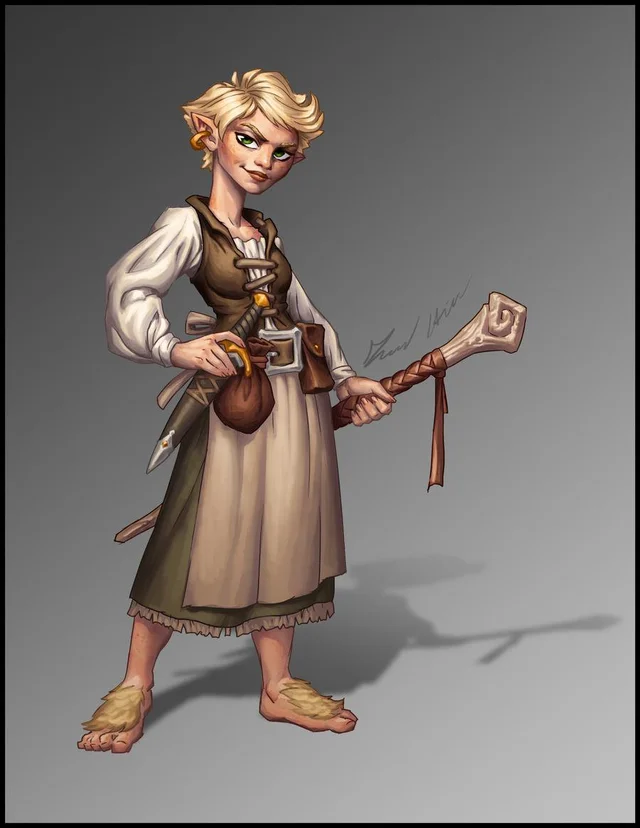 Also, I found several of the images you use. You cut off their bare and usually furry feet. This does two things. First, it proves my point: if you remove the most telling feature of a race, you make it hard to tell what that race is. Were you able to tell which one of the pictures I posted wasn't an elf?

Secondly, and even more importantly, it means that to "prove" your point, that halflings look just like humans, you had to actively alter the artwork. What does it say about your argument that you have to lie in order to defend it?


Hussar said:
Heh, one thing I did notice though. The top image on imaginary halflings got 59 votes in a membership of just under 1000. The top elf pic on /imaginary elves, a community of 25.6 thousand, got 1300 votes.
Click to expand...

So you're pointing out that more people are drawing the notoriously sexy and alluring elves than the often childlike or dumpy halflings. As if that means something other than what people like to draw.


Hussar said:
But, I was told that halflings are so popular. Even Imaginary Dwarves have 12000 members and their top pic got 650 votes. All three reddits are about the same age. If halflings were so popular and being played so often, as often as dwarves according to some people in this thread, you'd think that the art communities would be closer. But, hey, what do I know? Apparently I'm just wrong.
Click to expand...

You do realize that what artists choose to draw has nothing to do with what they like to play, especially since a lot of it is commissioned artwork, right? And that absolutely nobody has claimed that elves and dwarfs aren't popular, right? Yes?

[Edit: Also, as an artist, I can tell you that halflings typically have very different proportions than a human (or elf) has; they have more childlike proportions, and for some people--including myself--those proportions are hard to draw. So an artist might choose to stick to humans, elves, and other people who have "normal" proportions than draw halflings.]

So at this point, you have shown yourself to be a liar who tries to gatekeep artists. Why on earth are you still in this thread at this point?
Last edited: Jul 24, 2021

I get absolutely roasted over the coals for being factually inaccurate and dropping .6 of a percent. Multiple people take me to task for it.

@Faolyn makes a statement that hasn't EVER been true in WotC D&D and hasn't been true in D&D for 20+years. 3e onward, halflings have never had hairy feet. Something I very clearly stated in my disclaimer in my post with the pictures that obviously was ignored.

And yet, multiple people not only pos rep @Faolyn for pointing to elves with no ears - again, something that has NEVER BEEN TRUE in D&D - but also agree with them. Why should I pay attention to people who don't even know what halflings look like? I mean, anyone who agreed with @Faolyn has no idea what a 5e halfling actually looks like. Not knowing that halflings don't have hairy feet isn't some minor bit of lore. This was a major bone of contention, to the point where Pathfinder adds them back in to appeal to the nostalgia.

One wonders, if people are so concerned with factual accuracy, why they would be so quickly mistaken about such a major detail?

@Neonchameleon, is there a race of humans with feathers? Is there a race described as such? If not, then you're simply engaged in yet more whataboutism without bothering to acknowledge that you actually don't know what halflings look like in 5e. Perhaps if you spent a little more time actually learning about the topic, you'd find that your points carry more weight.

Umm, why are you arguing with @Chaosmancer about this. It's, I believe, @Neonchameleon who has advocated lumping gnomes with halflings.

Staff member
Mod Note:
At this point, I would cut a couple of you out of the discussion for getting personal.

But, this thread is now very, very long, and doesn't seem to have been constructive for a very, very long time. So, you all get to walk away tall, safe in the assumption that the other person would have gotten the boot, and that you won.

D&D 5E Is a halfling a half-gnome?