News Digest for the Week of February 14

Don’t forget you can catch up on all the gaming news of the week with Morrus’ Unofficial Tabletop RPG Talk! This week, Morrus and Peter are joined by the CEO of Cubicle 7 to talk about Doctor Who, Warhammer, Middle-earth, and more. 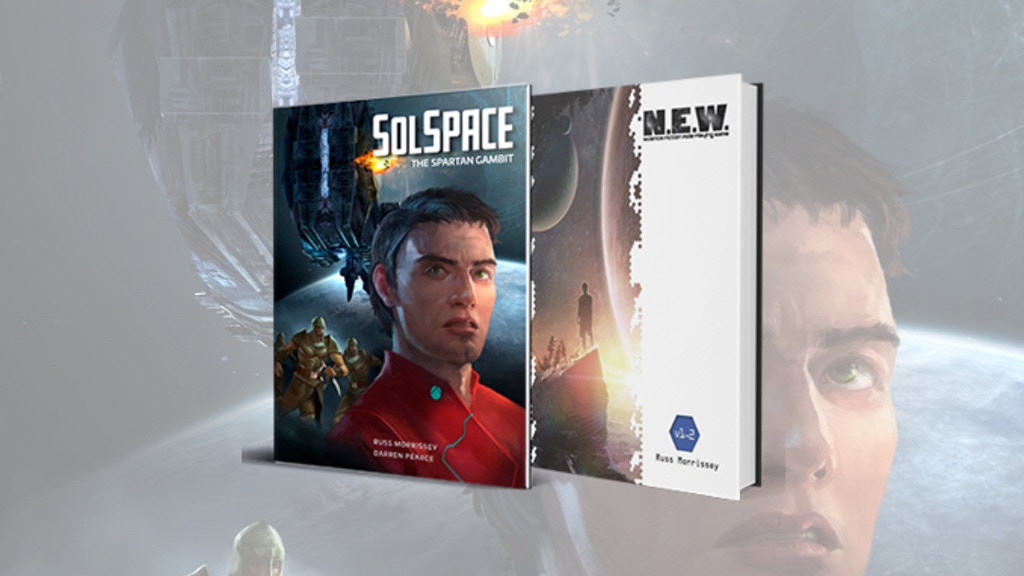 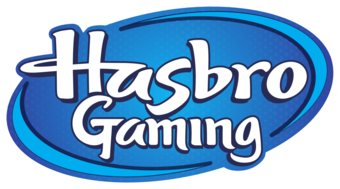 Hasbro held its quarterly shareholders call to discuss the fourth quarter of 2019 and the future of the company, with a large focus on Wizards of the Coast. Briand D. Goldner, CEO of Hasbro, praised Dungeons & Dragons for its sixth consecutive year of growth with streaming content up 50% over last year and a 30% revenue growth for Magic: The Gathering. In fact, the Dungeons & Dragons and Magic: The Gathering brands (along with mainstay Monopoly) made up for lagging sales elsewhere for Hasbro Games, bringing a 6% growth to the division. While net profits are down for both D&D and M:TG, Goldner state it is because of increased investment in digital projects and games which are currently in development. In fact, Goldner teased yet another announcement for both D&D and M:TG in the digital space coming on February 21. 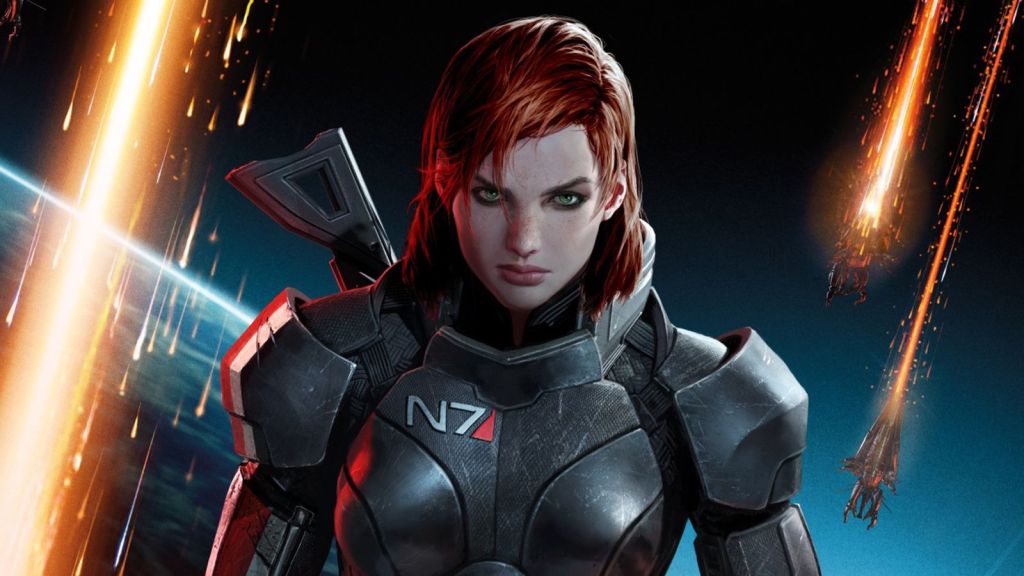 Speaking of Wizards of the Coast’s video game expansions, another BioWare alum, Drew Karpyshyn, announced on his blog that he will be joining Archetype Entertainment as lead writer. From the blog post:

“I’ve been in the video game industry for twenty years now. When I started at BioWare, everything was fresh and exciting. It was a dream job – talented people working together to create epic games like Baldur’s Gate, KOTOR, Mass Effect and Dragon Age. But as we grew and became more successful, things changed. We became more corporate. We were less able to make what we loved, and the teams were pushed to create games based on market research rather than our creative instincts and passions. My dream job became just a job, and I lost the enthusiasm and excitement I once had.

But with Archetype, my passion has been rekindled. The feel in the studio reminds me of my early days at BioWare; I can feel the magic in the air. And even though I can’t get too deep into the specifics of what we’re working on yet, we’re already generating plenty of excitement in the industry.”

Karpyshyn was the lead writer for Mass Effect and Mass Effect 2, wrote much of the dialogue and scenarios for Star Wars: Knights of the Old Republic, and worked as a writer on games in the Baldur’s Gate and Neverwinter Nights series. This will be a full-circle for Karpyshyn as he first got his start in game design at Wizards of the Coast working on products for the Dungeons & Dragons 3rd Edition version of Forgotten Realms including the novel Baldur’s Gate II: Throne of Bhaal. 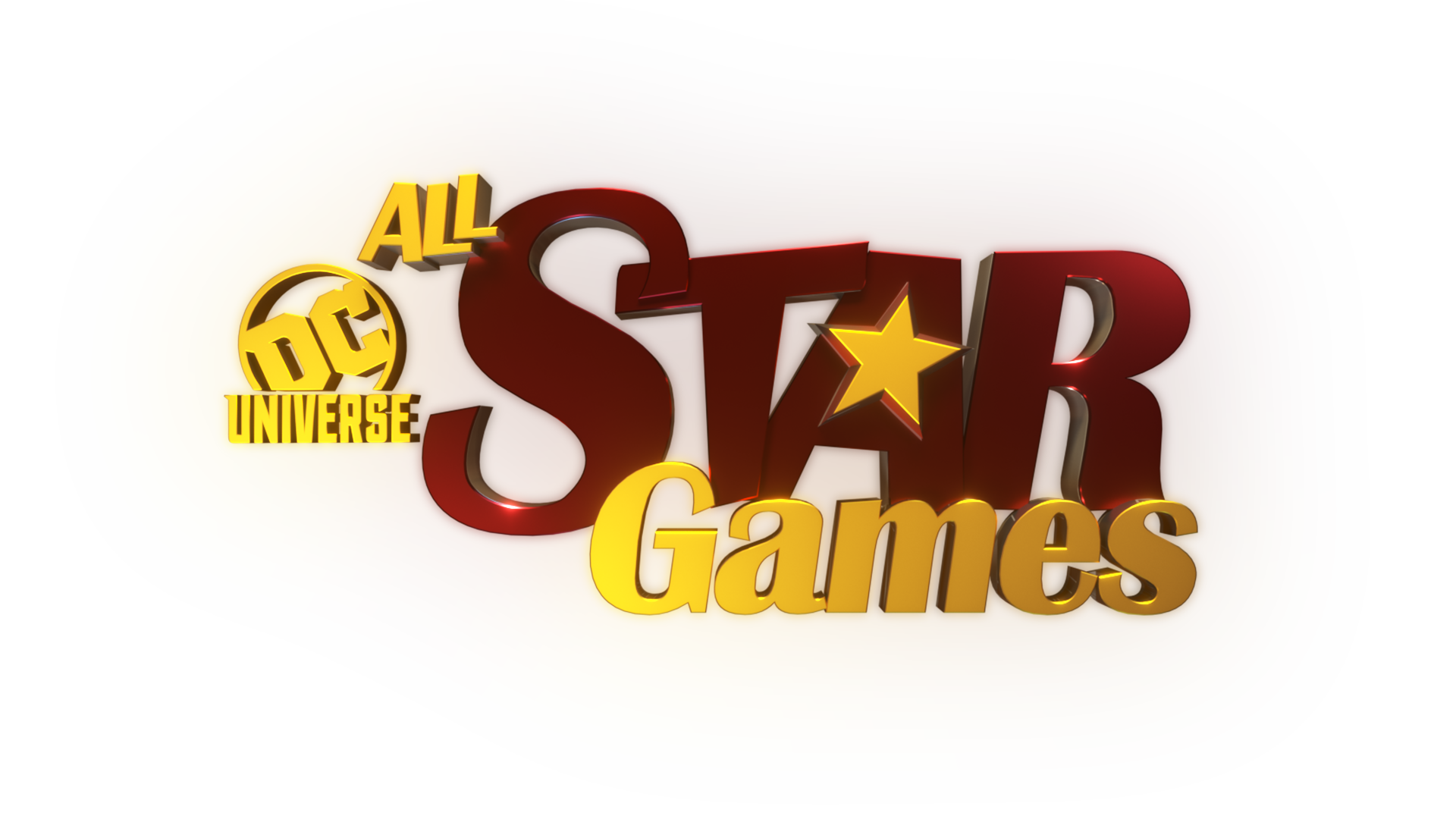 This isn’t the first time some of the cast have roleplayed for cameras. Prinze Jr. and Grant previously appeared on their own YouTube channel, Good Evening and Good Game, joining other Star Wars Rebels voice actors in playing Star Wars: Edge of the Empire. I would be remiss if I didn’t mention the other big RPG connection as Prinze Jr.’s co-star in both the Scooby-Doo live-action film series and the Wing Commander film, Matthew Lillard, is the owner of deluxe Dungeons & Dragons licensed product maker Beadle & Grimm.

DC Universe All Star Games is set to premiere on the DC Universe streaming service on February 28 and air each Friday. 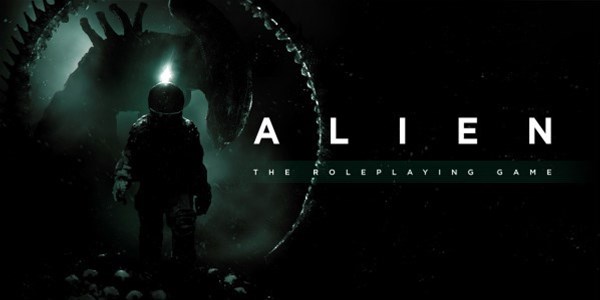 Speaking of Free League Publishing, they announced new licensing deals with seven companies to bring their recent Alien Roleplaying Game around the world with new translations. German (Ulisses Spiele), Spanish (Edge Entertainment), Italian (Wyrd Edizioni), Portuguese (New Order Editora), Russian (Studio 101), and Polish (Galakta) versions of the game will be arriving in the near future, with the first expected in June in French from Arkhane Asylum. 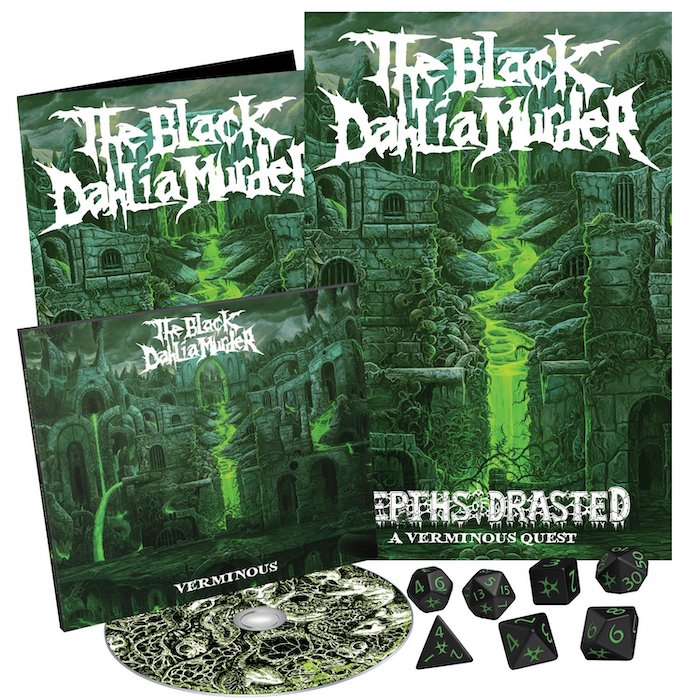 Death metal band The Black Dahlia Murder announced a special pre-order version of their upcoming album, Verminous, will come with an RPG bundle. “The ultimate way to experience Verminous! Blast the album as you and your party explore and battle your way through the ruined kingdom from the cover of Verminous and discover the Depths of Drasted!” The bundle features a 24-page campaign booklet and adventure by Dungeon Punx and listed as “D&D 5e compatible”, a custom set of black and green dice, a DM’s screen, four maps, character sheets, and a hand-numbered box. The pre-order was limited to only 500 copies which sold out almost immediately. However, the distributor Nightshift Merchandise told me via email that they are looking into a “Lite” version which will include the module and cards only (no DM screen, dice, or maps) due to the overwhelming demand prior to the album’s April 17 release. Disclosure: Nightshift Merchandise has agreed to provide the author of this column with a review copy of the album and promotional RPG products for a future review. 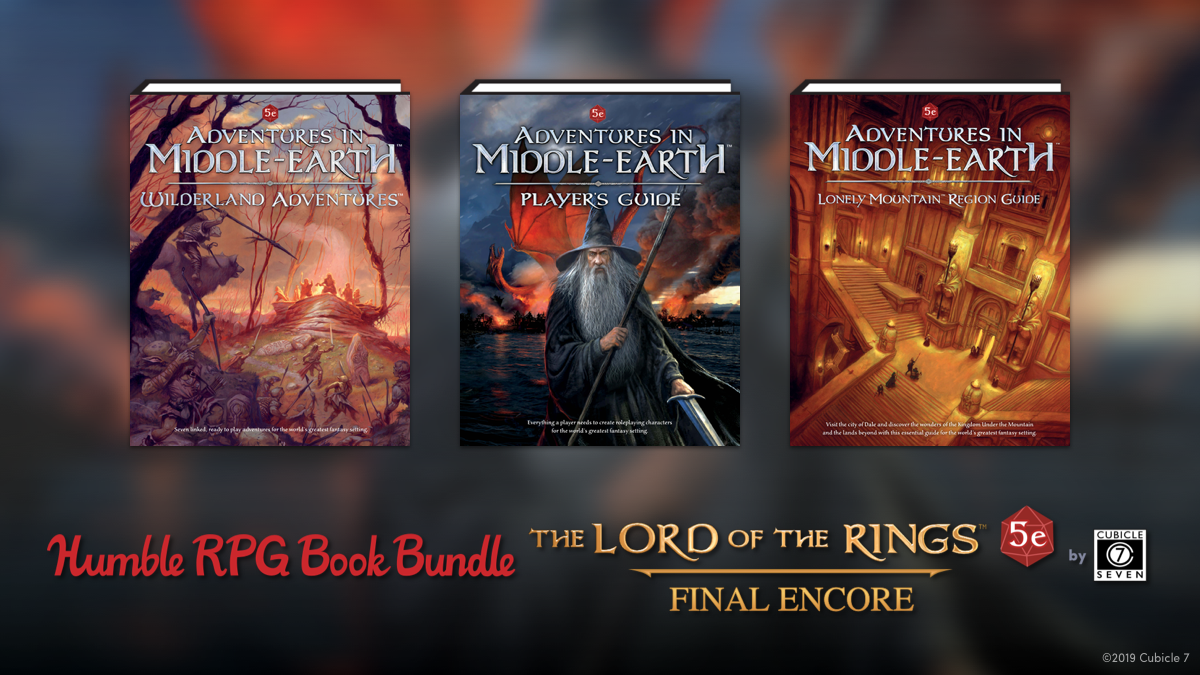 It’s your last chance of your last chance to get the Lord of the Rings 5e Final Encore bundle from Cubicle 7 and Humble Bundle. The bundle features almost every book released for the Adventures of Middle-earth line, the first officially licensed line to bring Tolkien’s world to Dungeons & Dragons rules (the most recent, the Rohan Region Guide, is not part of the bundle). Make sure to pick this bundle up as I was not exaggerating about “last chance” as Cubicle 7 will lose the license to Lord of the Rings this year. This bundle runs until Monday, February 17 so hurry. 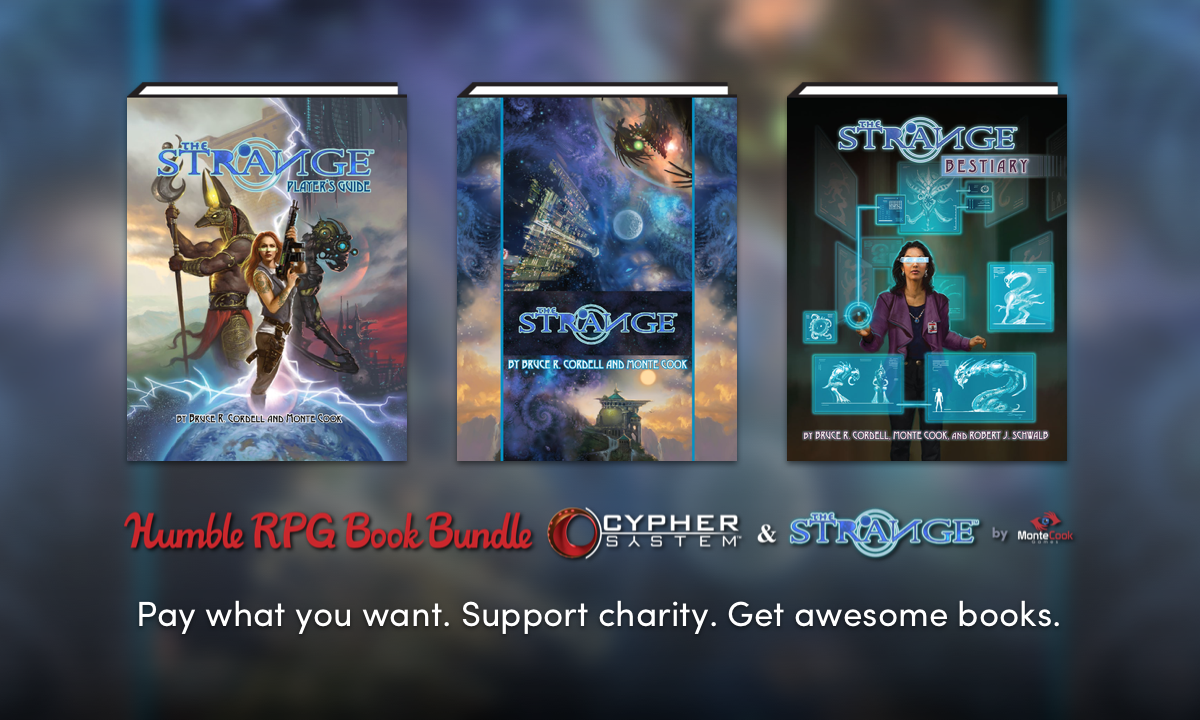 That’s not the only roleplaying bundle up now. Monte Cook Games has the Cypher System and The Strange bundle featuring more than thirty books. The bundle not just features a collection of Bruce Cordell’s The Strange but other Cypher System games like the 1980s superhero horror game Unmasked and the game of demigods and deities Gods of the Fallen. This bundle runs until Wednesday, March 4.

We’re in the middle of ZineQuest 2, Kickstarter’s promotion of roleplaying zines, so instead of going into detail about two or three projects like I normally do, I’ll give a brief outline of a few that caught my eye.

Fitting the theme in more ways than one, Punktopia: The Punkpunk Role-Playing Game looks to put the “punk” back in “-punk” games where you play punks living in the decaying urban center fighting everyone from The Man to gentrification to the jerk bouncer. The PDF is available for $5 and print version $10. This Kickstarter ends Tuesday, February 25.

You don’t have to play in the modern day to add some anti-capitalism to your game as The Social Dreadwork lets you add corporations to your fantasy roleplaying worlds in a way that is familiar to modern players but makes sense in the pseudo-historical setting. The PDF is available for $5 and the print version for $10. This Kickstarter ends Tuesday, February 18.

You might think that Mage Against the Machine is part of a theme with the other two, but the name’s a bit more literal as you play time-traveling wizards fighting a futuristic robot apocalypse by altering key moments in their own past in this GM-less game. The PDF is available for $5 and the print copy for $9. This Kickstarter ends on Tuesday, February 8.

The system-agnostic collection Dungeons & Dilemmas seeks to give you the tools to create moral puzzles in your games to challenge players with dungeons that are more than just a dungeon. The PDF is available for $7 and the print copy $15. This Kickstarter ends Monday, February 17.

Finally, Funny Freakout is a Forged in the Dark based game where the players take on the role of producers and stars of a comedy prank show, balancing the needs of the show to pull in ratings to stave off cancellation with the safety of not pushing your pranks too far and causing real harm to the NPC victims lest they refuse to sign the rights to air the prank or worse, seek retaliation. The PDF is available for $5 and the print copy for $10. This Kickstarter ends Wednesday, February 26.

That’s all from me for this week! Don’t forget to support our Patreon to bring you more gaming news content. If you have any news to submit, email us at news@enworldnews.com, and you can get more discussion of the week’s news on Morrus’ Unofficial Tabletop RPG Talk every week. You can follow me on Twitch where I’m starting a play through of the Mass Effect series starting this Tuesday, subscribe to Gamer’s Tavern on YouTube for videos on gaming history, RPG reviews, and gaming Let’s Plays, or you can listen to the archives of the Gamer’s Tavern podcast. Until next time, may all your hits be crits! Note: Links to Amazon, Humble Store, Humble Bundle, and/or DriveThru may contain affiliate links with the proceeds going to the author of this column.
Click to expand...

Supporter
That art for Verminous is kick ass.

Supporter
Another subject though. The Solspace adventure "Diehard" seems interesting.
How system-reliant is it ? Say, I have just bought the aliens RPG, and I would not like to learn a new system to run it. Would it work ?

Stereofm said:
Another subject though. The Solspace adventure "Diehard" seems interesting.
How system-reliant is it ? Say, I have just bought the aliens RPG, and I would not like to learn a new system to run it. Would it work ?
Click to expand...

I'm sure it's possible, but not without work. It's a WOIN-powered adventure. I would imagine learning WOIN is less effort than converting it to something.