News Digest for the Week of October 18 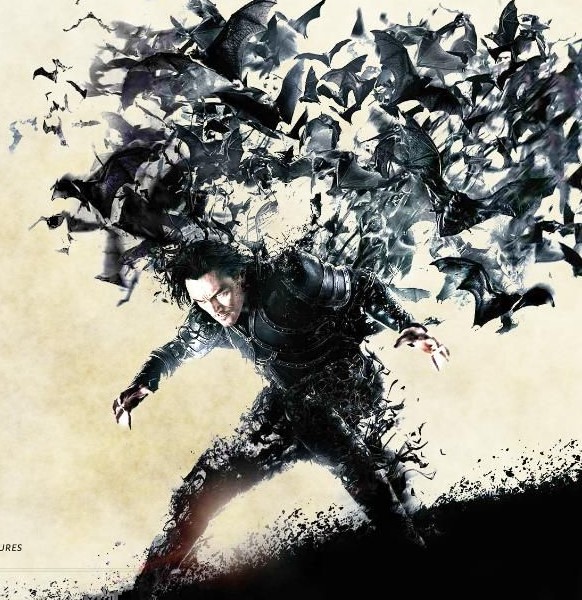 Wizards of the Coast released yet another Unearthed Arcana article, this time with new archetype options for the fighter, rogue, and ranger. The Rune Knight martial archetype for the fighter opens up rune magic for fighters, channeling the magic of the giants to inscribe runes on weapons, armor, and shields along with other benefits like the ability to grow to Large size for one minute twice per day. The Swarmkeeper archetype causes the ranger to be covered in a swarm of tiny fae spirits that take the form of any tiny beast you choose, enhancing your attacks and giving you other abilities. Finally, there is the Revived, a rogue archetype that cannot die, though you get slightly changed every time you come back (gaining a new proficiency from a previous life, or changing a personality trait, ideal, bond, or flaw). There’s nothing in the playtest material at this time that says a Revived Rogue must give up their name or hang out with a flying skull.

WizKids previewed two new sets of spell effect miniatures. The first set, Mighty Conjurations, features effects from different spells such as rope trick, healing spirit, flaming sphere, Mordenkianen’s faithful hound, dancing lights, Forcecage, and more. The second set, Halastar’s Tumultuous Templates, are 3D spell templates for fireball, spirit guardian, burning hands, faerie fire, web, and other area of effect spells. The first set of pre-painted miniatures will retail for $49.99 while the second for $59.99, both due for release in February 2020, just ahead of the May release of their WarLock Dungeon Tile line of 3D terrain.

Gale Force 9 announced their line of Eberron products for release with Eberron: Rising from the Last War. The Eberron DM Screen will feature panels with a map of Khorvaire, a table of Dragon Marks, goods and services prices, a list of common names, and other information about the Eberron setting. The Eberron Map Set will feature three vinyl maps of differing sizes, the largest of the entire continent of Khorvaire at 30” by 42”. Finally, Gale Force 9 will round out their collection of monster cards with the D&D Creature & NPC Cards and the D&D Epic Monster Cards, the former containing 182 cards and the latter 77 cards which, with the previous entries in the series, finishes out all creatures and NPCs in the Monster Manual, Volo’s Guide to Monsters, and Mordenkainen’s Tome of Foes. All of these products are due for release in December 2019. The DM Screen will retail for $15.00, the Map Set for $40.00, the D&D Creature & NPC Cards for $20.00, and the D&D Epic Monsters for $30. 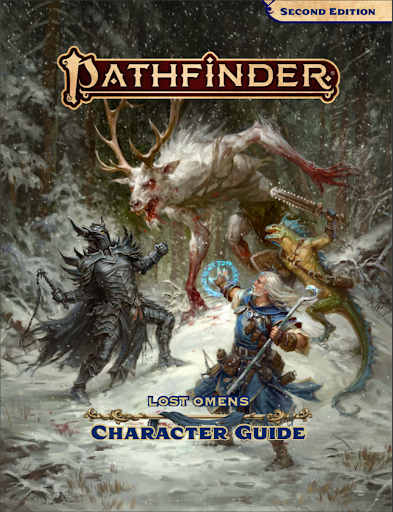 Paizo released another round of previews for the Lost Omens Character Guide. First up, we’ve got a look at the Pathfinder Society, the titular organization of the Pathfinder game system. The Pathfinder Society is an exploration group focused on discovering as much as possible about the world and its history, attracting adventurers and knowledge seekers of all kinds. Next we got the full table of contents for the sourcebook so we know exactly what we’re getting. Of the 136-page book, almost half of it is devoted to ancestries, both ones from the core rulebook like humans, dwarves, elves, gnomes, goblins, and halflings and an entire chapter devoted to new ancestries like the hobgoblin, leshy, and lizardfolk. Over fifty more pages are devoted to the various organizations, twelve pages for an NPC gallery, and four more pages of theme templates to apply to monsters from the Bestiary. And in case you missed any of the previews or short stories, Paizo collected them all in one handy blog post. The Lost Omens Character Guide is available now from Paizo’s website and should be in game stores and mass-market outlets shortly with a retail price of $34.99. 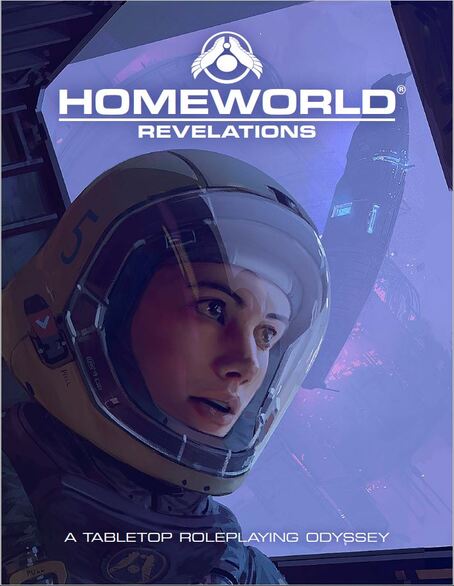 Modiphius announced they have acquired the license to the Homeworld series and will a brand new roleplaying game series, Homeworld: Revelations. For those going “That seems vaguely familiar but I can’t place from where”, Homeworld is an award-winning real-time strategy game originally released in 1999 by Relic Entertainment and published by Sierra Studios and (in the campaign mode at least) put players in the role of an alien species looking to rebuild following their planet’s destruction so they can liberate their ancient homeworld from the empire that attacked them. The game was one of the first to show space movement in 3D rather than on a two-dimensional plane and eventually spawned three sequels/spin-offs. Earlier this year, Gearbox announced they had the rights to the video game and would be crowdfunding Homeworld 3 with a release slated for 2022. The tabletop roleplaying game’s release date and product line-up will be announced in 2020 and the game will use Modiphius’s 2d20 System.

A company using the name “White Helm Games” launched a Kickstarter for a board game called Dungeon Hoard. Unfortunately, it turns out that the game Dungeon Hoard already existed from the actual company White Helm Games. The Kickstarter used art assets from the actual game’s website and directly copied the game description from their page on The Game Crafter. The actual White Helm Games released a statement on Facebook warning against the fraudulent Kickstarter. The project was canceled by the “creator” in a pair of confusing project updates. The first said (and all spelling, grammar, and punctuation mistakes are from the original despite my spellcheck screaming at me about leaving them) “Maybe i will close this compain because a lot of kids come here and comment that they own the game and they are not , ok so where's their compain ? we didnt even copy anything , they didnt even put any product or any compain and they come to say its their game ? WTF , now who want this compain to continu vote and pledge , we will deliver very early the game . Regards The Real Team of dungeon hoard” and followed it up later the same day with “i canceled this compain because no one deserve + some of this kids who come and broke the project , for theese ppl who beleived ernest did u see his page verified? (blue badge) ?? because they lied to all of u ”

The person in question allegedly started another Kickstarter project based on another already-existing game, Christ is Born. This second project’s funding has been suspended by Kickstarter.

Other stories this week from EN World you may have missed:

Cubicle 7 released previews of the new map of Middle Earth for The One Ring – Lord of the Rings Roleplaying Game by artist Jared Blando, both a full overland view and several smaller maps of specific regions.

Sean Hillman has a review of the new adventure/campaign from James Introcasa and Johnn Four, The Demonplague.

Michael Tresca writes about the number of novels and other media created that were originally based on tabletop RPG campaigns including Dragonlance, the anime Record of Lodoss War, The Expanse, and more.

M. T. Black has another entry in his series looking back at the issues of Dragon Magazine, this time looking at the June 1979 Issue #26.

The blog Dragons Never Forget has updated their list of roleplaying blogs in the 2019 Great Blog Roll Call.

Lewis Pulsipher takes a look at the phrase “Your character wouldn’t do that” and the idea of player agency.

Mike Myler’s exploration of the monsters of folklore and tall tales continues with the Mothman, stated for 5e.

Egg Embry’s full list of tabletop crowdfunding efforts with a full eighteen projects overviewed that are ending before Halloween.

EN Publishing launched their own webstore as a one-stop source for all the EN Publishing games including the Masterclass Codex, sourcebooks for What’s OLD is NEW, Judge Dredd and the Worlds of 2000AD products, and more in both digital and physical format. It even has a functional shopping cart!

Another One Page Adventure is up, this one titled “Desert on the Road” where the players investigate a desert that showed up randomly and must find out what caused it before it can spread.

EN5ider #296 is all about interesting magic items in “Technomancy Gremlins”, a collection of thirteen items powered by curious gremlin spirits conjured for a specific task. 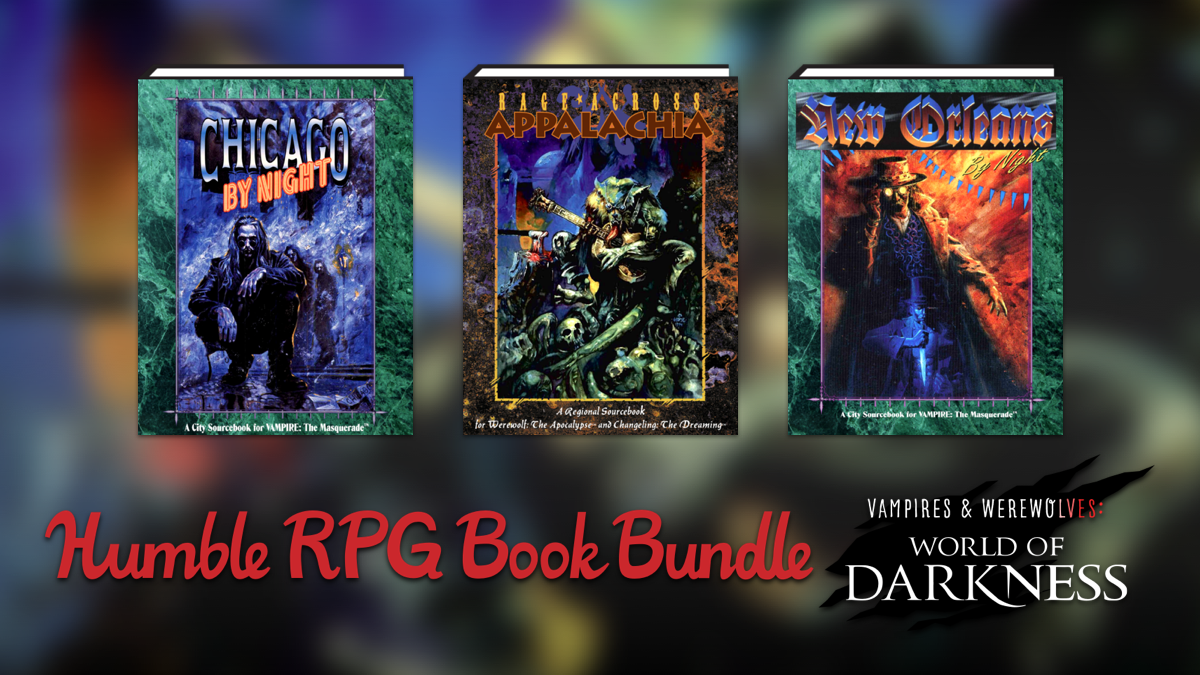 This is a “hurry if you want in” project, featuring two ship designs specifically for Starfinder but useful for any science-fiction game. The first, the Jinda Wolf, is a small warship while the Hikari Utsuri is a general transport ship. The miniatures are unpainted resin a little more than two inches long each with one-inch acrylic hex stands, while the posters maps are tactical scale 1”=5 ft. squares overlaid and are double-sided 24” by 36”. The miniatures are available for a $10 pledge, the poster maps for $20, or both for $28. Not only that, but fulfillment is expected to begin next month so no waiting forever to get your maps and mini. This Kickstarter is fully funded and runs until this Monday, October 21.

I think one of the best things about the boom in indie roleplaying games are the number of games being marketed directly at children to introduce them to the hobby, and Little Monster Detectives is a great entry in this gaming genre. Players create their own monsters who investigate the mischief that other monsters get up to. The rules scale in complexity so children of all ages (or even adults) can play at a level of complexity that’s comfortable for them. The PDF is available for a €10 (about US$12) pledge, €25 (about US$28) to add on the color hardcover, and €50 (about US$56) for a full gaming set of the core book, gamemaster’s screen, four player notebooks, a collection of stickers, and a poster. This project is fully funded and runs until Wednesday, October 23.

That’s all from me for this week! Don’t forget to support our Patreon to bring you more gaming news content. If you have any news to submit, email us at news@enworldnews.com, and you can get more discussion of the week’s news on Morrus’ Unofficial Tabletop RPG Talk every week. You can follow me on Twitch where I’ll be streaming Fallout 1 tomorrow and finishing up Shadowrun: Dragonfall with Shadowrun designer and author Kevin Czarnecki this Sunday, subscribe to Gamer’s Tavern on YouTube for videos on gaming history, RPG reviews, and gaming Let’s Plays, or you can listen to the archives of the Gamer’s Tavern podcast. Until next time, may all your hits be crits! Note: Links to Amazon, Humble Store, Humble Bundle, and/or DriveThru may contain affiliate links with the proceeds going to the author of this column.
Last edited: Oct 18, 2019

That was an odd story about the Kickstarter scam. I never thought about that. Thank you for letting us know.

dave2008 said:
That was an odd story about the Kickstarter scam. I never thought about that. Thank you for letting us know.
Click to expand...

It's why it's a good reason to check to make sure the Kickstarter (or any crowdfunding project) is from the people who they claim to be. This one was found out pretty quickly because their profile couldn't seem to settle on a location, listing as "Paris,Seattle, WA. Molly, Robert, and Shawn." On both their Kickstarters. Plus the dramatic tone shift between the Kickstarter description and the updates. Plus that people immediately said "Isn't this game already out?"

This is the first time I've seen someone do something this blatant and they were quickly caught. The closest I've seen otherwise were people attempting to crowdfund games for licensed IP without actually having the rights they claimed to have.

Abstruse said:
This one was found out pretty quickly because their profile couldn't seem to settle on a location, listing as "Paris,Seattle, WA. Molly, Robert, and Shawn."
Click to expand...

Sounds like Molly, Robert, and Shawn should have just asked for a raise in their allowance instead of launching a fraudulent Kickstarter "compain".