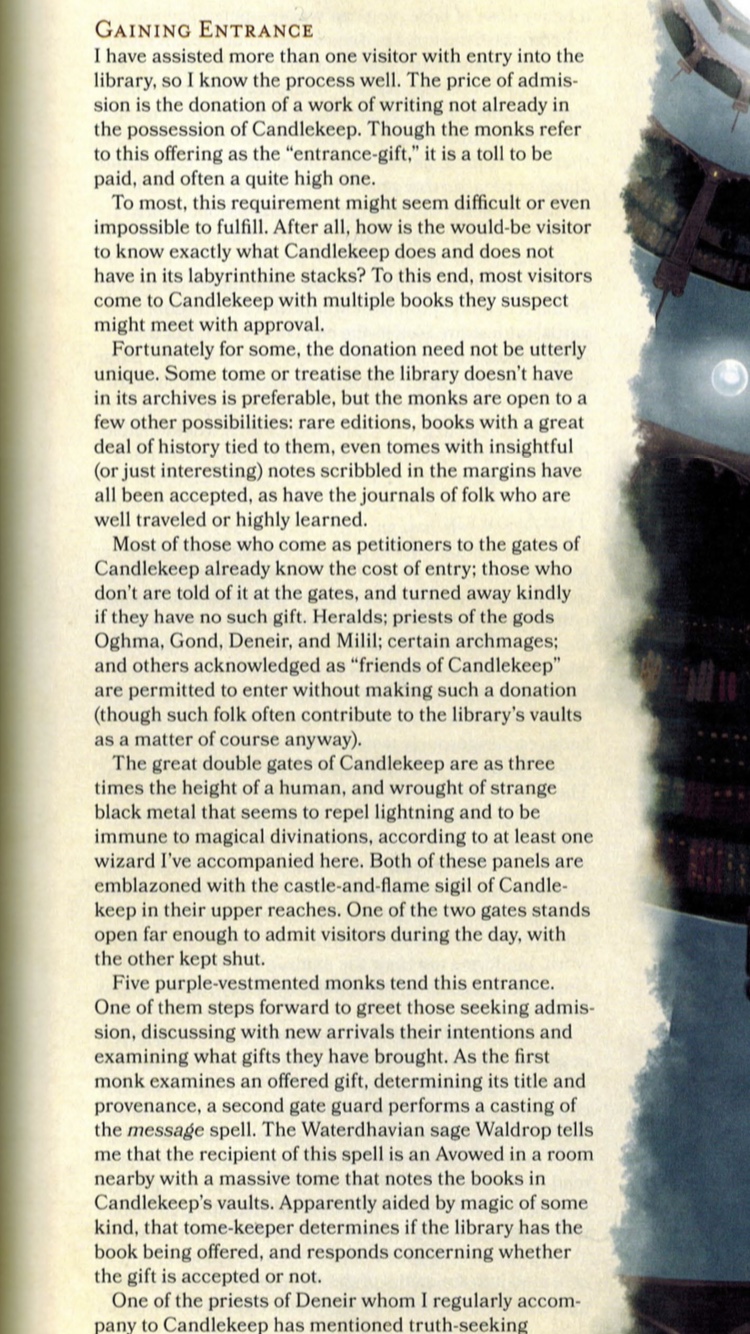 Candlekeep would be too far. That's pretty much an expedition. Waterdeep would take enough time, to get there and back (six days there from Julkoun, three days back to Daggerford, if you're traveling fast but not risking killing horses). That's nearly a full tenday out of a three tenday month.

There's always Delfin the Wizard in Daggerford, too. He runs a school, even. What's her face, your Uncle's court wizard, has old Gwaereth's library, too. So maybe you don't have to go so far.

Arcana, History, Arcana, will put Titus deep in study, that's for sure. I can work with that, if that's the way you wanna go. Gimme some quick thoughts on what you think each check means, and I'll run with it.

From Hoard of the Dragon Queen: "The stretch of road from Baldur’s Gate to Waterdeep is a journey of 750 miles. Horse-drawn or mule-drawn freight wagons cover 15 miles per day, depending on conditions. The animals need one day off after every six days of hauling to recover from their work. All things considered, the trip is expected to take two months."

Now, A lone rider could easily do the same in half the time, but you've gotta go there AND BACK. (Daggerford is south of Waterdeep, but Candlekeep is south of Baldur's Gate, so that's negligible). You could take a ship, but not from Daggerford. You'd have to go to Waterdeep for that ANYWAY. In ideal conditions, a sailing ship can get you to Baldur's Gate in 8 days, and then it's either hire a smaller coastal ship (2 days each way, if all goes perfectly) to take you to Candlekeep, or ride a hundred-forty miles (4 days, if you're lucky, each way). Minimum 20 days, more likely 28. You'd have only a few days to do research!
Last edited: Nov 1, 2019

Yeah, no, I didn’t know they were so far. I’ll go to the closest library.

Let’s do something else for the third one. He is still a fighter. Pit fighting works, so Arcana, History and Athletics. I’ll write up a post as soon as I can with those, and what he’s looking for with each will be in there.

Could Dandin make the trip to Waterdeep with the boats in the time allotted? Maybe Titus could ride along and while Dandin is doing his trading he can spend some time at their library?

Let's do some calculations...

Dandin's boats are great for scooting up and down the Shining River, but they'd have to hug the coast to be safe at sea. It would be a bit dangerous (check involved), and It's about sixty miles downriver to the sea, which you could easily do in about 10 hours, but I don't think you'd want to sail at night. (You could end up out to sea, or wrecked on shore, both bad things)

It's about 120 miles up the coast to Waterdeep, but you'd have to follow the coast closely, which goes in-and-out, so probably more like 200 miles. (In particular because there's a few big rivers that you could follow up before realizing it, or be pushed out to sea, so it's a feat of navigation, too, as well as seamanship) So, you'd camp about four nights, assuming all went well.

It could be done in five or six days, barring mishap. Then back. Not really faster than riding, and more dangerous, but Dandin could carry a lot of goods. Take Janus with you as your expert. He may be a riverman, but he knows his boats. (He was the defacto riverfolk leader who's family you saved at the beginning. He likes you guys.) He'll take a reasonable cut, and make sure you have a brave crew.

Here are my rolls, since I need to know how they turn out for a post.

Arcane would be trying to contact his Patron, or just trying to learn about it. It would be researching magic and/or attempting to make contact.

History would be for trying to make sense of his past, and figure out why he would have these powers.


Athletics would be some time spent training with other soldiers, sparring and fighting to keep his skills up. Money can be involved, but mostly he’s wanting to train.

tglassy said:
Here are my rolls, since I need to know how they turn out for a post.
Click to expand...

No you don't. You just need to give me a general intention and some rolls, and I'll tell you how it goes.

Dandin makes a trading trip to Waterdeep and invites anyone who wants to come along. Basically, he's looking to score some income, possibly a magic item, and set up a working trade route between Daggerford, Julkoun and Waterdeep.

There are my rolls and explanations, then.

Angis heads a company that does caravans from Baldur's Gate to Waterdeep via Daggerford. He could put you on a caravan.

KahlessNestor said:
If Tommi wants to keep the boots, that's fine. But Angis will take them if he doesn't want them
Click to expand...

Angis should have them -- they help him more. I'll remove them from Tommi's sheet.

Plus now we get a bouncing dwarf.

(sorry for silence on all this -- I don't think I got a notice for the additions to this thread).

(Okay -- so the original post on downtime was OOC 119, if others are looking for it.)

Kobold Stew said:
(Okay -- so the original post on downtime was OOC 119, if others are looking for it.)
Click to expand...

That post talks about an old UA, which in the end, I kind of threw out (not on purpose) and just went with a much simpler (though perhaps more confusing, if you're not used to it): "Tell me what you're doing. Roll three skill checks that you think might be appropriate. I will tell you how it works out." It's what I did back then, and it's what I mean to do here.

You don't really need to "choose a downtime activity" (though feel free to check their list for ideas, if you're stuck), just think of what your character wants to do for a month (though the character might not know it's going to be a month, they may have moved on with their lives and will get dragged back into adventuring.)

That kind of thing is up to you, as long as we find an excuse to keep them in the game.

For example, Dandin probably assumed that he could avoid any more life-or-death adventures, and is simply building his shipping empire. If he decides to risk the trip to Waterdeep, He'll probably want to roll something like:

Persuasion (to gather a good crew); Survival (to make good choices at sea); and probably Persuasion again (to do some serious trading in Waterdeep

I'm not sure how much of a sailor Dandin is. The survival could be Int (Navigation) if he has the tool proficiency (or even if he doesn't) or Vehicle (Sea), but he could leave all of that stuff to Janus and roll more leadership-type stuff. He's got professionals for all that, after all.

Though in this case, because it's so interesting and important, I think I might roll all of that for Janus, or get 'Goyle to do it... I'll think about it.

Sorry -- that's my bad. Hope what I've posted is acceptable.

@Kobold Stew If you're gonna get closer to Sherlen, you're gonna have to start thinking of her name right. It's not "Sharron" it's "Sure-Lenn" - There's an "L".

What you posted was perfect!

No, pointing people (including me) to that old post was good, just after reading it, I realised that it never quite worked out that way in the end, even then.

I rolled Insight, Perception for doing his trading thing, and Persuasion for helping keep a lookout on the trip. He definitely wants to hire Janus to basically captain the boats as he knows that he himself doesn't have the necessary skillset to do it himself. Possibly on a permanent basis.
See post #969 for the rolls.

FitzTheRuke said:
@Kobold Stew If you're gonna get closer to Sherlen, you're gonna have to start thinking of her name right. It's not "Sharron" it's "Sure-Lenn" - There's an "L".
Click to expand...

I swear I know this, and that's what I say in my head.

tglassy said:
There are my rolls and explanations, then.
Click to expand...

One question before I start resolving these (they may take me some time): Does Titus go to Waterdeep with Dandin or Angus or do his research in Daggerford?