Continuing our countdown, these Ozian monsters have strayed far from the cute and kid-friendly into body horror, torture, and undeath. 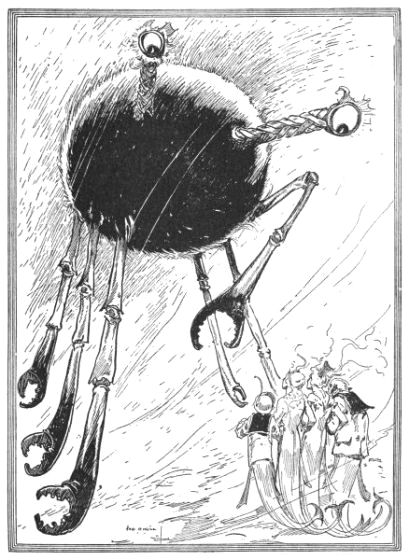 In The Sea Fairies, Trot and Captain Bill come across the dreaded Zog. Zog's bad enough, but his Yell-Maker is a nightmare-inducing monster crab with the sole purpose of torturing people:

The next moment these curtains were violently pushed aside and a dreadful sea creature swam into the hall. It had a body much like that of a crab, only more round and of a jet-black color. Its eyes were bright yellow balls set on the ends of two horns that stuck out of its head. They were cruel looking eyes, too, and seemed able to see every person in the room at the same time. The legs of the Yell-Maker, however, were the most curious part of the creature. There were six of them, slender and black as coal, and each extended twelve to fifteen feet from its body, when stretched out in a straight line. They were hinged in several places, so they could be folded up, or extended at will. At the ends of these thin legs were immense claws shaped like those of a lobster, and they were real "nippers," of a most dangerous sort. The prisoners knew, as soon as they saw the awful claws, why the thing was called the "Yell-Maker," and Trot gave a little shiver and crept closer to Cap'n Bill.
Click to expand...

Increase a chuul's size to Huge and remove its Sense Magic and Tentacles abilities to add the yell-maker to your campaign. 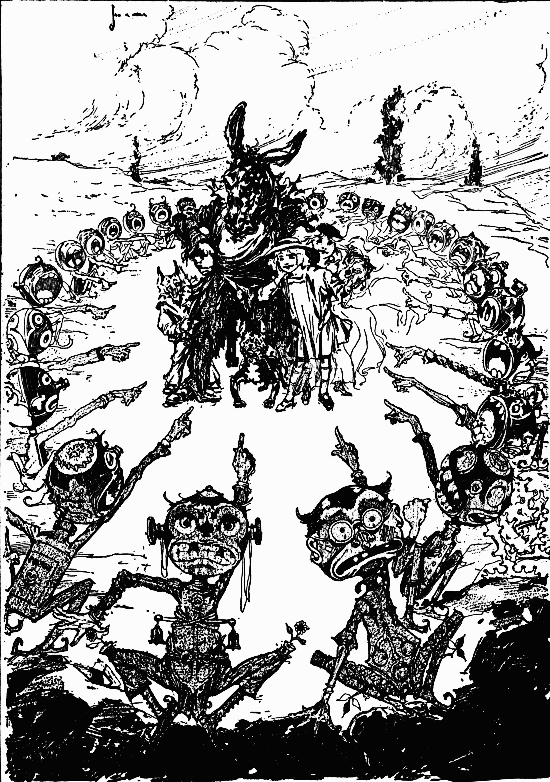 These bizarre beings in Road to Oz were probably inspired by a toy, but that doesn't excuse their utter strangeness:

They moved forward a little faster to see what the dog was barking at, and found perched upon a point of rock by the roadside a curious creature. It had the form of a man, middle-sized and rather slender and graceful; but as it sat silent and motionless upon the peak they could see that its face was black as ink, and it wore a black cloth costume made like a union suit and fitting tight to its skin. Its hands were black, too, and its toes curled down, like a bird's. The creature was black all over except its hair, which was fine, and yellow, banged in front across the black forehead and cut close at the sides. The eyes, which were fixed steadily upon the barking dog, were small and sparkling and looked like the eyes of a weasel... The thing gave a jump and turned half around, sitting in the same place but with the other side of its body facing them. Instead of being black, it was now pure white, with a face like that of a clown in a circus and hair of a brilliant purple. The creature could bend either way, and its white toes now curled the same way the black ones on the other side had done.
Click to expand...

When charmed with the Love Magnet, their affection turns to hunger as they simply plan to eat the person who charmed them (in this case the Shaggy Man). As if that wasn't bad enough, scoodlers can throw their heads at people.

Treat scoodlers as goblins who can throw their heads for 1d6 bludgeoning damage at a range of 30 feet, but use the Loathsome Limbs rules for trolls (heads only). Give them regeneration of 1 hit point too. 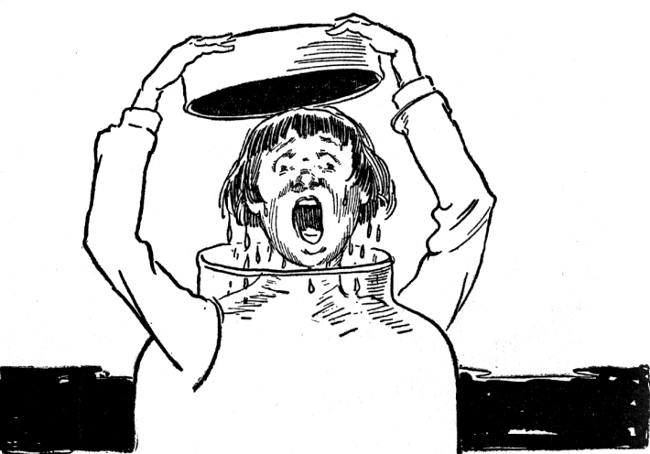 There's a distinct lack of undead in Oz, for good reason -- few folks ever die there, and those that do die "off camera." But preservefolk are an obvious exception in that they survive in some sort of half-life. They debut in The Cowardly Lion of Oz, created by a cooky witch who prefers to keep everyone from spoiling by putting them in pickled jars:

"Preservatory," said a large sign just beyond the glass gates, and over the whole city hung a sweet, smoky haze. The houses had glass fronts and were more like cupboards than ordinary dwellings. Each had three stories, or as Bob Up explained later to Dorothy, three shelves. And on these shelves, swinging their legs, sat the oddest individuals in Oz. From head to knee they were enclosed in glass jars. Their arms and legs came through especially cut places, but these were carefully soldered so as not to let in any air. And their heads, somewhat flattened by the glass lids, had a squashed and foolish look.
Click to expand...

You can reskin zombies as preservefolk by increasing their Intelligence to 10 and their Armor Class to 13. 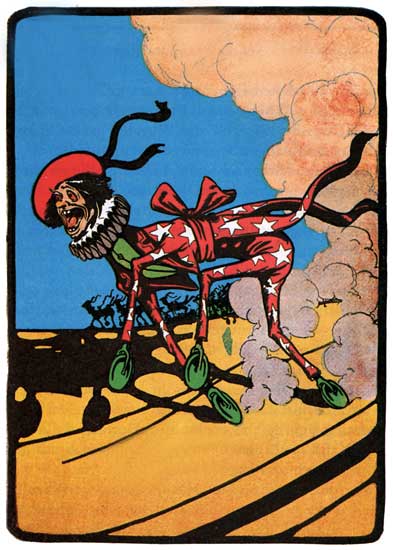 Like the body horror of scoodlers, wheelers don't make any biological sense. They're braying residents of Ev and, while frightening, more bark than bite. They appear in Ozma of Oz:

It had the form of a man, except that it walked, or rather rolled, upon all fours, and its legs were the same length as its arms, giving them the appearance of the four legs of a beast. Yet it was no beast that Dorothy had discovered, for the person was clothed most gorgeously in embroidered garments of many colors, and wore a straw hat perched jauntily upon the side of its head. But it differed from human beings in this respect, that instead of hands and feet there grew at the end of its arms and legs round wheels, and by means of these wheels it rolled very swiftly over the level ground. Afterward Dorothy found that these odd wheels were of the same hard substance that our finger-nails and toe-nails are composed of, and she also learned that creatures of this strange race were born in this queer fashion. But when our little girl first caught sight of the first individual of a race that was destined to cause her a lot of trouble, she had an idea that the brilliantly-clothed personage was on roller-skates, which were attached to his hands as well as to his feet.
Click to expand...

You can reskin galeb duhrs as wheelers. Change their type to humanoid from elemental, lower their AC to 12, and remove their False Appearance and Animate action. 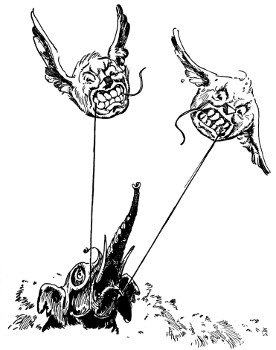 These horrors appear in The Silver Princess in Oz. They are essentially flying heads, who use their ears to flap about. Worse, they consider all bodied intruders to be hostile and will use a garrote (carried between the teeth of two headfolk) in attempt to carve off limbs to make their prey one of them:

"Wrong, how wrong," chattered all the Headmen, bobbing up and down like balloons let off their strings. "They're going to cut off his body," confided one of the long-nosed tribesmen, zooming down to whisper this information in Randy's ear. "The creature's head is welcome enough and with those enormous ears he'll have no trouble flying, but his body—oh, his body is awful and must stay behind. And your body, too, you little monster, we'll cut that off too," promised the Headman in his oily voice. "What use is a body, anyway? I see you have very small ears, but they can be stretched. And just wait till you've been debodicated, you'll feel so right and light and flighty."
Click to expand...

Headfolk are basically vargouilles. Replace their Bite and Stunning Shriek attacks with the garrote attack from ettercaps.

Of course, these conversions are rough approximations. To see how I gave full statistics to all of these monsters, see 5E Foes: Oz Bestiary. Happy Halloween!
Click to expand...

These horrors appear in The Silver Princess in Oz. They are essentially flying heads, who use their ears to flap about. Worse, they consider all bodied intruders to be hostile and will use a garrote (carried between the teeth of two headfolk) in attempt to carve off limbs to make their prey one of them:

Headfolk are basically vargouilles. Replace their Bite and Stunning Shriek attacks with the garrote attack from ettercaps.

Of course, these conversions are rough approximations. To see how I gave full statistics to all of these monsters, see 5E Foes: Oz Bestiary. Happy Halloween!

I always wondered if these fellows were the inspiration for Junji Ito's "The Hanging Balloons."

Iry said:
I always wondered if these fellows were the inspiration for Junji Ito's "The Hanging Balloons."
Click to expand...