D&D 6E Sixth Edition - or - alright, I'm gonna do it myself then

Publisher
A friend of mine has baited me into making my ideal D&D and I don't refuse a challenge. Also, I'm eager to jump at every opportunity to procrastinate instead of working on Swords under the Sun, the last 20% of polishing is a damn scary thing.

I doubt it will turn into something serious (though, SutS started that way too.... Damn), I see it's as more of a design-muscle stretching.

How I define "modern D&D" experience:

Sacred cows I want to keep:

Things that I absolutely don't want:


I always start designing with a mock-up of a character sheet... So, here it is.
No, I don't know what the hell Action Points are. Or if Dexterity isn't added to the initiative by default, what is. But I will figure it out. 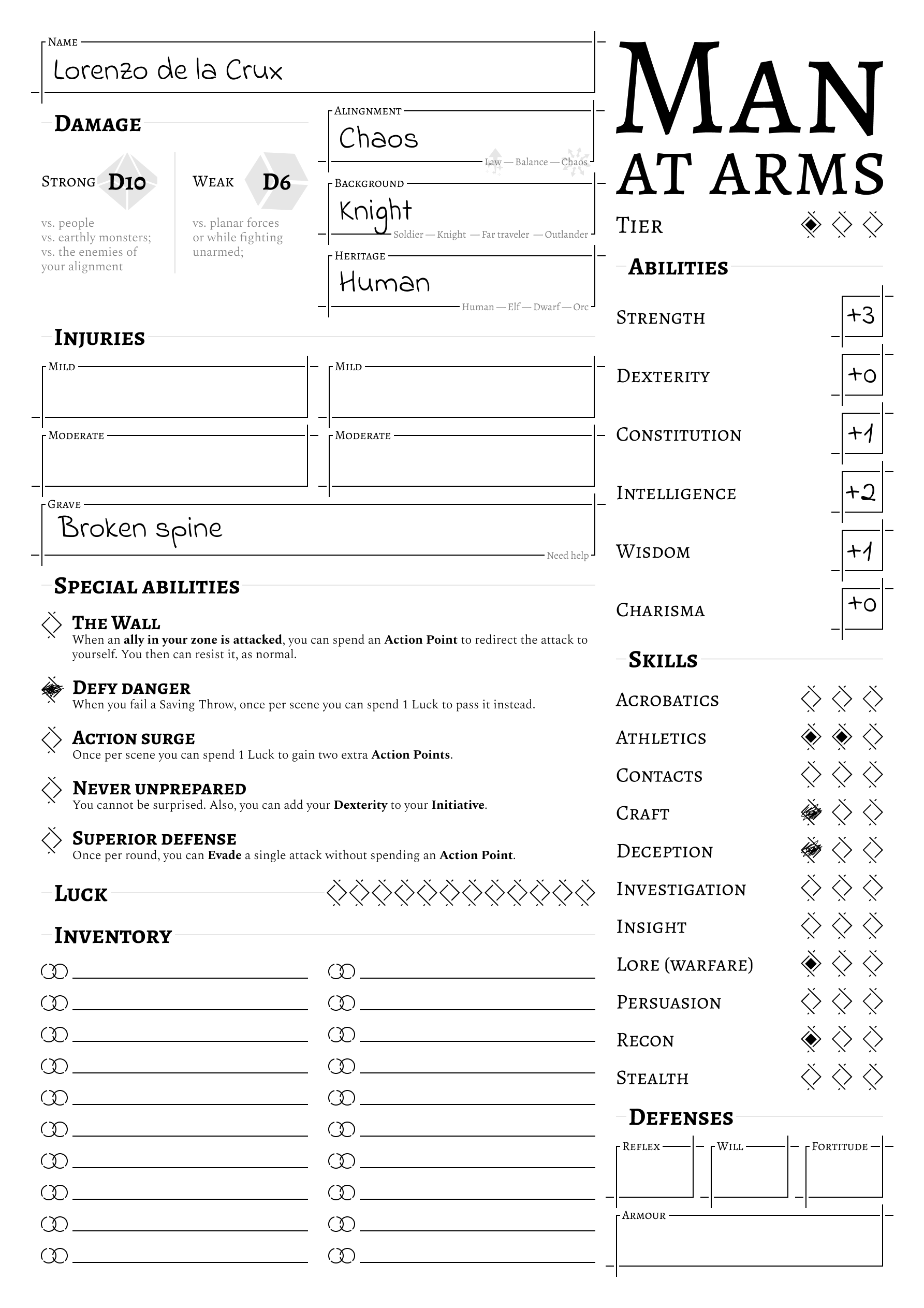 Publisher
I just realized that "how I see drastic progression" wasn't ever typed out.

There will be several distinct tiers (1, 2, and, you'll never gonna guess, 3) -- each progressively more and more powerful. Within one tier, progression is mild and incremental -- so lvl 1 character isn't that weaker than a lvl 3 character.

When the tier changes (because of a timelapse, while characters were training; because the Gods gave them divine power; etc), the characters basically take a prestige class. So, at tier 1 you play as a man at arms, at tier 2 you can become a Battlemaster, a Spellsword or a Paladin, then you get to become a Champion, or the Chosen, or you can walk the Way of Thousand Swords.

I'd do ''incremental'' proficiency bonus dice for skills and attack rolls. Then Expertise and Advantages/Disadvantages would move the bonus in a direction or another.


<-Disadvantage | Advantage->​
So, say you are proficient in Craft. It gives you 1 Advantage in Craft. When you make a craft roll, you roll 1d20 + 1d4 + Ability score (PS: I love that you skipped the whole Score and Mods thing).

Now, say you are a rogue with an Expertise feature that gives you +1 Advantage on Craft. Now you roll 1d6 instead of the 1d4. Work in a well-stocked atelier? That's 1 more Advantage, you now roll 1d8. But wait, that workshop is in fire! That's a big disadvantage, so you gain 3 disadvantages, meaning you are back to a Base roll.

Love what the mockup hints at.

You could wrap skill checks and saves into one thing. Everything becomes a 'save'. That would help cut down on ink.

Forget any 6ed before 5-10 years.
Your best bet would be a game with the same power progression, so you could still use the same monsters, magic item and other material.

I frankly don't see myself moving to another new edition any time soon- if ever. Particularly given the history of even numbered editions, and the general trend/direction I see the game moving in. (and I already have FOUR editions of the game, and bookshelves groaning under the weight of materials I already own- most of which I haven't gotten to use yet)

I do agree with essentially all of your design goals, though. I just prefer a more streamlined, abstract combat. Mostly based on how agonizingly slow combats got when they started adding on lots of tactical options and rules- and the endless rules arguments they usually spawned. I enjoy action and combat in D&D, but when each player's action in a 6 second combat round takes 10-15 minutes...

I kinda write something up and revised it. It's kind of like B/X with microfeats and 5E skill system.

Slow_Travel said:
Love what the mockup hints at.

You could wrap skill checks and saves into one thing. Everything becomes a 'save'. That would help cut down on ink.

So save and skill checks are both just Ability Checks, you just apply different proficiencies to skills and saves.

Publisher
Ok, I have some news. I've run a little playtest, inventing rules on the spot, so I have something I'd want to change after.

The GM sets the difficulty by turning a several knobs:

So, our party of two got their asses handed to them by the undead at a small town of Qatadaya. They ran off to the big city, and Saeed al-Farhaadi decided to ask the sultan to send them some help.

I've decided that this task is damn hard, because:

For each advantage that PC has, they can mitigate one requirement, "pay" one price, reduce risk, increase effectiveness or just roll another D20.

Advantages can be got from:

So, Saeed has decided to spend one on mitigating the requirement of winning an audience (we did role-play him sweet-talking the head of guard) and other two to increase his effect -- by laying out how Qatadaya has a strategic position that would allow the ghūls to effectively harass trade routes. He failed and was officially on thin ice, the guards were out to kick him the hell out, but his brother, Jasoor, stepped in and tried to defuse the situation by offering the party's services to sultan, free of charge, and to pay him three sā worth of gold.

I've decided that:
I rename the clock into "Sultan Muamar makes an example out of Khaldun's sons" and let Jasoor roll. He succeeds and sultan has agreed to sent his men to Qataqaya, in exchange for his brother's head.


Ah, the most juicy part. Combat.

So, a horde of ghūls, probably raised by an evil sorcerer who's is forbidden to be called by his true name, so everyone refers to him as Alsharir (the evil one), attacked the town, where the brothers were staying to visit their dying uncle, in the middle of the night. It was one damn bloodbath, but brave brothers tried to save people.

We've discovered that combat works with Fate-like zones instead of a grid, so I've divided their uncle's house to a several zones:
We've rolled Initiative, and since there's Never Unprepared ability that allows to add Dexterity to Initiative rolls, I've decided that by default, an Initiative roll is just a flat D20 roll. Then, special abilities refer to some "Action Points", so I've decided that everyone has two Action Points at the start of the fight -- two is an easy number to count (though I'm thinking of changing it to three).

They stood in the hallway, using it to hold the assault, Jasoor has won the initiative, then the undead, then Saeed.

He poked his spear at one of the ghouls and I've decided that when opponents are on even ground (and since Chokepoint negates any penalties for being outnumbered, the brothers were on an even ground with ghūls), the attacks just hit, unless the target defends itself.

Given that there's a special ability that allows a Man at Arms to Evade attacks without spending an Action Point, then everyone can Evade by spending an action point. Why not use Reflex save? I've defaulted to 50/50 chance of DC 10, and the ghūl passed it.

So, a Reflex save is DEX or WIS, whatever is higher, because why not. Then, Fortitude is STR or CON and Will is INT or CHA. Maybe I'll change it to whatever is lower, but I don't know yet.

Jasoor decided to keep his Action Point to defend himself next, and even while I thought that AP are restored at the end of one's turn, I've decided that one can forfeit their action to keep an AP for a next turn, but I've placed a hard cap of 3 AP max, because otherwise one can sit doing nothing and then explode with a ton of actions -- not good.

So, the poked ghūl decided to retaliate, but now because Jasoor has a spear which gives a clear advantage of range, I've decided that it would need to get close first -- so, it rolled its Dexterity (+2) and on a fail, it would open itself for an opportunity attack. It succeeded, though, and Jasoor decided to find out how damage works.

I've decided that ghoul's bite is one nasty thing, 2d6 worth of damage nasty thing, and rolled it. 7. Then we've figured out that Luck is probably stands in for HP as a buffer for permanent Injuries, so Jasoor filled 7 dots. I've decided that "normal" enemies have no Luck and just always take Injuries instead.

Another ghoul tried to bite Saeed, but I guess a shamshir (it probably should've been sayf, but no one couldn't remember the correct word in Arabic, so we went with Persian shamshir instead), still has a range advantage over ghoul's teeth. We then decided that it goes like: auto hit > roll 2d20 and pick the highest > roll 1d20 to better represent a difference between, y'know, a spear and a sword.

The ghoul failed, and got his head sliced off clean with 6 damage and I've decided that dirty zombies don't deserve any Injury slot.

Anyway, two brothers have decided that they can't do shit to a massive horde, and instead opted for sneaking their family out through a secret passage that their uncle has used to smuggle the citizens of Qatadaya during an invasion of westerners. Saeed carried their uncle while Jasoor provided cover... poking? Not fire, certainly.
Last edited: Apr 17, 2021

Slow_Travel said:
You could wrap skill checks and saves into one thing. Everything becomes a 'save'. That would help cut down on ink.
Click to expand...

Hmmm maybe, that's a thing I did use in my Dungeon World hack...

Though I feel there's a meaningful difference between active skills and reactive saves.

I'd do ''incremental'' proficiency bonus dice for skills and attack rolls. Then Expertise and Advantages/Disadvantages would move the bonus in a direction or another.


<-Disadvantage | Advantage->​
So, say you are proficient in Craft. It gives you 1 Advantage in Craft. When you make a craft roll, you roll 1d20 + 1d4 + Ability score (PS: I love that you skipped the whole Score and Mods thing).

Now, say you are a rogue with an Expertise feature that gives you +1 Advantage on Craft. Now you roll 1d6 instead of the 1d4. Work in a well-stocked atelier? That's 1 more Advantage, you now roll 1d8. But wait, that workshop is in fire! That's a big disadvantage, so you gain 3 disadvantages, meaning you are back to a Base roll.
Click to expand...

Hmhmhm, that sounds cool. I'll test it with bonus dice instead of more/less D20 next.