I like the Pathfinder lore for Asmodeus better than the D&D lore. He convinced 1/3 of all the inhabitants of The Heavens to forsake their deity and follow him - do any of those beings feel betrayed / exploited / abandoned by Asmodeus, looking back in hindsight? There is your army. Maybe some of these devils could be used to create the apparition (or the substance) of Asmodeus' long-since-slain brother's spirit.

4e lore does offer the Ruby Rod, the power of which allowed Asmodeus to strike down He Who Was, the former ruler of the now-hells domain. The Ruby Rod has not been seen since, but if Asmodeus could be deprived of it - he would become much weaker.

Asmodeus "ate" the Ruby Rod; it is hidden within his body. Disembowel him and you can grab it.
Read Plane Above: The Astral Sea for lore and plot inspiration.

The other Lords of Hell should co-star or cameo in the final confrontation. One of the Archdevils who is known for strength should be set to launch the final attack (motivation: Asmodeus treats you like a toy or yo-yo, promoting you and demoting you for mere amusement), Mephistopheles be ready to smite Asmodeus down (motivation: promotion), and Mammon whisk away the Ruby Rod afterwards (motivation: rule indirectly from the advisor's post) ... but they all turn on each other (because "there can be only ONE !!!" ) before completing the mission, so the PCs have to take down the grievously wounded Asmodeus and then survive the Archdevils' knock-down-drag-out fight for supremacy.

edit: A word on scenery: there was recently a Kickstarter to write a 5e "translation" of Dante's Inferno. If the imitator work lives up to the reputation of the original ... use it!

Reminds me of this classic as the Knights seemed to think sucker-punching gawds was a good idea. 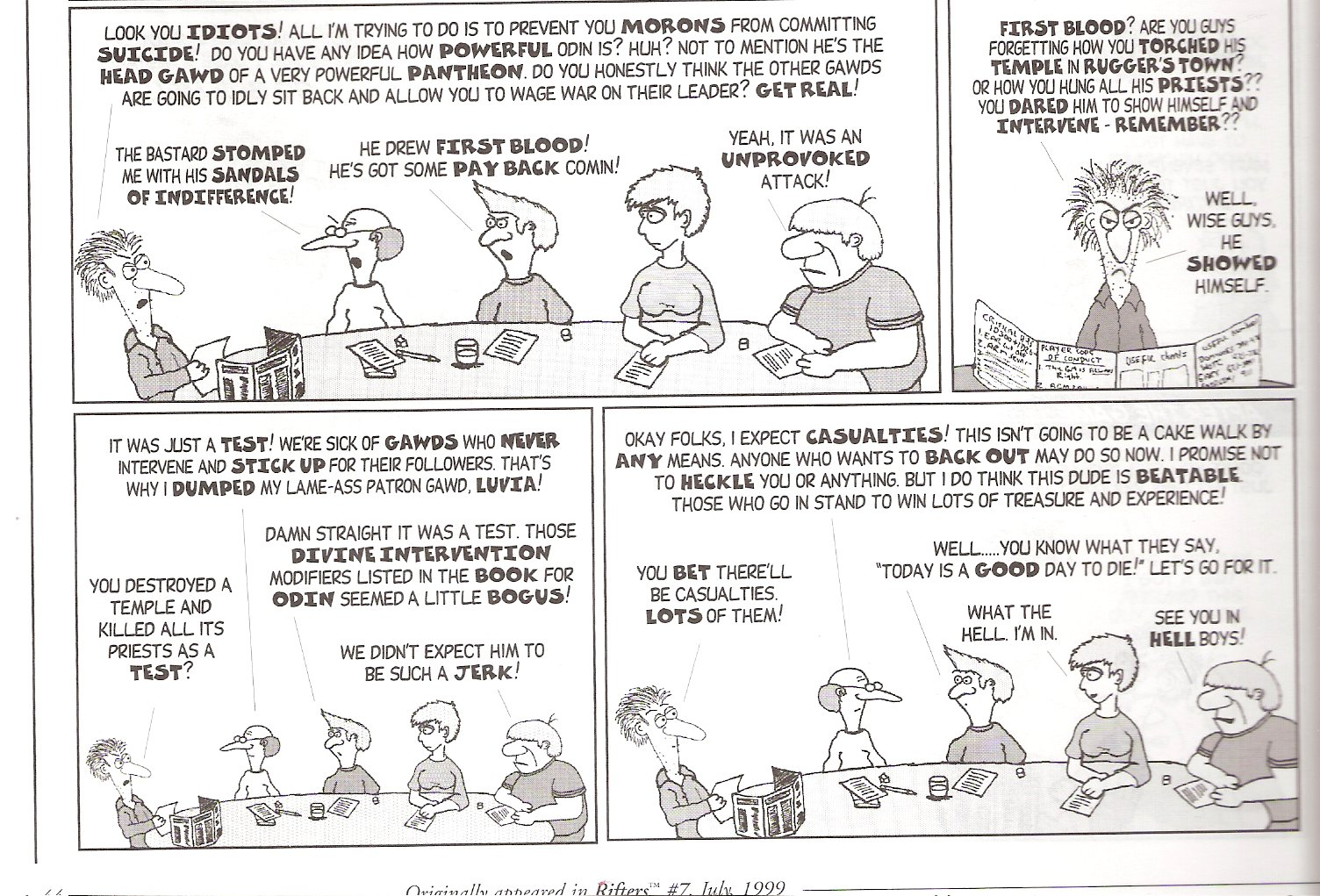 But, on point, what would the other gawds think if some mortals went around with ambitions to snipe them? He's not just a big bag of hit points waiting to be snuffed. Each of the gawds in the Realms serves a purpose, for good or ill, in keeping the universe running.

toucanbuzz said:
Reminds me of this classic as the Knights seemed to think sucker-punching gawds was a good idea.

But, on point, what would the other gawds think if some mortals went around with ambitions to snipe them? He's not just a big bag of hit points waiting to be snuffed. Each of the gawds in the Realms serves a purpose, for good or ill, in keeping the universe running.
Click to expand...

Zariel convinced an entire army to invade Hell before, if the PCs are smart, they might be able to get advice, equipment and maybe even help from a variety of places for a round 2 - ranging from the armies of good seeing this as a way to finally take Hell down for once and for all, to demonic or daemon help for their own purposes. Heck, throw a Slaad spawning stone down into Hell and see what happens - it'll be a distraction at least. Imagine should the PCs show up with an army of angels, modrons, demons, hags and daemons all chomping at the bit to put down the leaders of Hell for once and for all...

tglassy said:
So now we're playing a game where the primary goal will be to go through each of the nine hells until they can ultimately face the statless Asmodeus. Now, I'm well aware of who Asmodeus is. I know he's essentially a Greater Deity with absolute control over the nine hells.
Click to expand...

@tglassy
Now you can do anything you want; however, the first thing I wanted to point out is that in 5e Asmodeus has power similar to lesser deity (ie Tiamat) not a greater deity. From the 5e Monster Manual:

"The Nine Hells has a rigid hierarchy that defines every aspect of its society. Asmodeus is the supreme ruler of all devils, and the only creature in the Nine Hells with the powers of a lesser god. Worshiped as such in the Material Plane, Asmodeus inspires the evil humanoid cults that take his name. In the Nine Hells, he commands scores of pit fiend generals, which in turn command legions of subordinates."

PS, if you are looking for a stat block. Here are some sources:
Asmodeus 5e
5e Epic Updates ArchDevils - Asmodeus
Asmodeus - Supreme Master of the Nine Hells
Asmodeus

Additionally, you could dive into the 4e lore about the ruby rod for inspiration. In 4e the rubby rod is made from a piece of the shard of evil that lies at the bottom of the Abyss. The Abyss, ie demon lords, want this piece back. Tricky proposition, but you could get a demon lord to help.

Mort said:
I like this direction - but with an add on. Not all the stronger residents want Asmodeus in place. Quite a few will be of the "better to rule in hell..." Philosophy and will be only to0 glad to replace him.

As such this is a huge opportunity for serious intrigue - which seems helped by the fact that 3 of the 4 PCs likely have extremely good Charisma (they're charisma casters) and could thrive in that kind of environment. I'm not talking about intrigue within the party (unless they're into that sort of thing) but more that navigating the Hells can be much more about political force, alliances, etc then pure physical force.

Also, put in some sort of no suicide clause. Otherwise Asmodeus would just have offed himself eons ago and left Hell to be more powerful.

D&D 5E Ravenloft: How would you do the new "Grand Conjunction"?