Somehow, you acquired the rights to Star Wars. However, one of the stipulations of the deal is that you must reboot the franchise. The original movies, the Legends EU, all the Disney Wars stuff, it's all in the past. It's your Star Wars universe now.

What is your reboot like? What's changed? What stays the same? What is similar? What is totally different that makes the reboot yours and yours alone?

Focus on the universal themes in the Hero's Journey, re-working classical mythology into a modern storytelling format.
I'd probably go with a small-screen adaptation. I'd keep Obi-Wan around longer, training Luke and discussing the Clone Wars, meeting with people like Bail Organa to muse about the Old Republic days and the height of the Jedi - which would allow us to not actually show the content from the prequels. Show Leia on Alderaan at this point.
Likewise, I'd have a few Jedi survivors being hunted by Vader and show that. Play up that Obi-Wan needs to protect Luke and train him while staying in hiding - and later on the run - from Vader.
I'd introduce Han and Chewie more gradually. Like maybe they get caught up running cargo for the Rebels, and they drop the shipment. To repay the Rebels for the loss, they take the deal to transport Luke and Obi-Wan.
That's sort of the first season, maybe ending with Leia's capture and Obi-Wan's decision to help Senator Organa's daughter as a favor to him, without knowing Vader is behind it.

Throw out virtually all the lore. This is a fresh start, where we build up a big space opera universe from 3 core elements.
Each film will focus on 1 of the core elements, with the others being of secondary importance. A big space war movie first, then a space western, then the space samurai film third. Beyond that, we'll see how it goes.

Staff member
I wouldn’t necessarily toss ALL of the lore, but I would clean up stuff in it that, in retrospect, made for uncomfortable storylines. I’d excise the dependence on RW stereotypes that Lucas got sloppy with. I’d get rid of the patently ridiculous that wasn’t merely comic relief- the Ewoks would have to have something better up their sleeves than what they did to take out Imperial forces, for instance.

Dannyalcatraz said:
the Ewoks would have to have something better up their sleeves than what they did to take out Imperial forces, for instance.
Click to expand...

I read somewhere that originally they were supposed to be Wookiees. If so, the whole movie would have had a different tone.

zarionofarabel said:
you must reboot the franchise. The original movies […] it's all in the past
Click to expand...

I'm not sure what makes Star Wars what it is (Star Wars) if you discard the original movies (which introduced all the major players, relationships etc), really. We'd need to answer that first. What is Star Wars without that information, what can we keep and what must we keep?

Powers need to more varied than telekinesis. So for my space magic I would certainly want it to be more akin to space magic from Alpha Omega rpg. Essentially Star Wars has only just cottoned on to the fact that with the force they can do wuxia stuff - as seen in Star Wars visions. Embrace that powers are varied, such that one world could be wuxia inspired, another akin to Jason Bourne, or Arrow, superheroes, and even Doctor Strange.

So those with force sensitivity could have access to; Energy: Elemental, Kinetic, Photonic; and Mental: ESP, Telepathy; Body: Augmenting themself.

Also embrace the idea of a multiverse, and work out the cosmology.

Streaming series, weekly, 20 eps/year.
Framing device:: C-3PO and some of the droids teaching the children of Luke and Mara the history of the skywalkers, from their point of view...

Rest of Ep IV as is.
a bunch of rebel missions follow, including the Ord Mantell incident. End a season wth Ep V first half... and statt the next with Ep V second half. We get a scene before Luke lands on Dagobah with ben and Yoda... "Tell him you should."
"No, my friend, I should not. It will not serve our cause. I failed his father. His father is no more."
"We shall see."
Rest of Ep V as before.
Some battles and adventures, and Luke finally returns to Dagobah.
Luke, of course, launches into a tirade about his father.
Ben calmly replies, "Until I faced him at the death star, I did not know that what was left of Anakin Skywalker was in the suit of Darth Vader. Vader was said to have killed Anakin and saved the Emperor."
"When I came here, you should have told me!"
Yoda, barely wobbling, pulls Luke eye-to-eye. "Enough you were told! Ready you were not! Our last hope almost you were. Almost."
"Leia?" blurts Luke.
"Your twin sister. Your mother was mortally injured; we put her in a medical stasis until Bail could revive her. He loved her enough to support her choice of Anakin over himself. And of active resistance to safeguard her, and you and Leia, for years, until he could save you two."
"And that got him, and Alderaan, killed!"
"No, Luke. Palpatine did that. Just not in time to destroy the targets."
"Know that, Obiwan, you do NOT!"
"It matters little. If the plans had been there, the Alliance would have been doomed. They were not. Luke, you and Leia must free the Galaxy."
back to rest of Dagobah portion of Ep VI.
A few rebel missions, grumbling about Luke's Absence.
Luke returns, just in time for Endor.
Then from endor, Courtship of Princess Leia, Truce At Bakura, and the thrawn Trilogy, then Dark Empire and Dark Empire II

I would keep the basic heroes journey, but rework the plot and characters. Just because it's a reboot, does not mean you need to redo the exact same thing.

Then I would include one of each marginalized group as if simply checking boxes, and hope the audience doesn't call me out on it. I would also focus on including as many things that translate well to merchandise, as humanly possible.

opacitizen said:
I'm not sure what makes Star Wars what it is (Star Wars) if you discard the original movies (which introduced all the major players, relationships etc), really. We'd need to answer that first. What is Star Wars without that information, what can we keep and what must we keep?
Click to expand...

What Jon Favreau did was to adapt a "wandering gunslinger adopts a kid" archetype from two of the genres that inspired Star Wars (there are Westerns and Samurai films that use this story), kept it relatively simple and entertaining, then once the core characters were established, gradually brought in more and more of the lore of the EU.

I would want to do likewise, except that the lore would be introduced anew. A new look at what Jedi are, new worlds and empires and nations. More different from the Skywalker saga than even the Knights of the Old Republic. Echoes of recognition, rather than homages and callbacks to familiar worlds. But still, like poetry, it will rhyme with the originals. 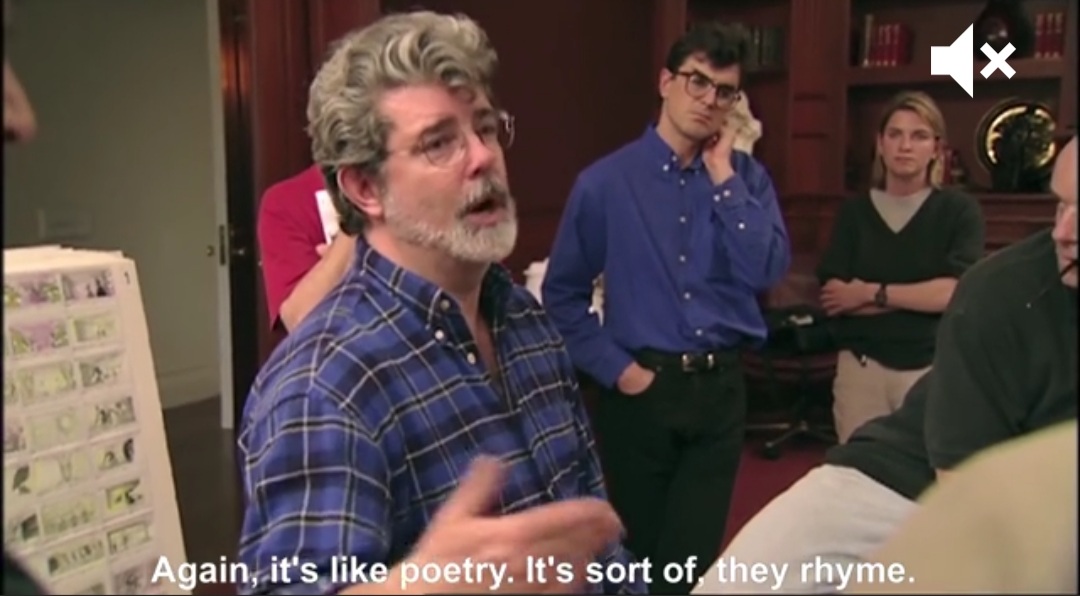 Maybe the first story should be about two bumbling commoners who try to join up with the military of a powerful empire, only to find themselves mixed up with a disguised Jedi general and an exiled princess trying to escape imperial territory. It's an archetypal story, after all. And there are different ways to tell the same kind of story.

If I owned the Star Wars rights I would declare episode 7, 8 and 9 banned and burn the negatives. Would shoot a new replacement trilogy. Everything else I can live with. The current short series on Disney+ are perfect for Star Wars. No need to reboot. Just keep going.

Ewoks are the only species that can use the force now.

payn said:
Ewoks are the only species that can use the force now.
Click to expand...

And to wear Beskar.

The original films were such a part of my childhood that I'm not sure changing them would destroy something. Numbers 1-3 with Jar Jar were mostly junk but aimed at kids and not the adults that first liked the original- which was likely the point. The last 3 were just bigger copies of the first 3 and did not do much for me either.

To make them better, I would focus more on backstory and character development. This is what makes movies feel more real. Back in the day though, movies were 90 minutes and followed a pattern of time management.

Dioltach said:
I read somewhere that originally they were supposed to be Wookiees. If so, the whole movie would have had a different tone.
Click to expand...

Well, yeah, that was the point of the switch. Lucas wanted a culture with more primitive technology to be a key to defeating the empire. Chewbacca's development throughout the trilogy exposed the wookies as technological. It's not necessarily a bad idea, but using a relatively cutesy critter like an ewok was a bit weird - even if there were menacing elements like their willingness to eat people.

If I were to redo this, I'd seriously reconsider the primitive vs technological idea in favor of placing wookies back in the narrative and being more directly liberationist since the wookies were enslaved.

Let's be right The Phantom Menace was terrible, Attack of the Clones not great either. Revenge of the Sith was meh.
Now Rise of the Skywaker showed us that Star Wars, especially with Star Wars Visions that they could do wuxia fantasy. There is so much you can do with Star Wars and lean into other genres.

You could design a game that starts back and looks at the kinds of movies and genres that inspired George Lucas to make Star Wars, and play up each of those genres or sub-genres in different sections of a rulebook, or even in different sourcebooks. Maybe you want your SW game to be more Flash Gordon-y, or focus on the samurai and mysticism aspects, or politics and gangsters, or war movies and medieval knights, etc.

In a similar manner, Rise of the Skywalker shows that the Jedi could easily be used in other settings, e.g. wuxia as i said earlier, or Arrow - such that some heroes possess innate force abilities allowing them to be cut above the rest.

Worlds of Design: Lost in Translation
2