Iconic D&D artist Larry Elmore has been working on a new Dragonlance painting. He has been sharing progress pictures over recent weeks. This is apparently a commission for a client, and is entitled "The Women of Dragonlance". 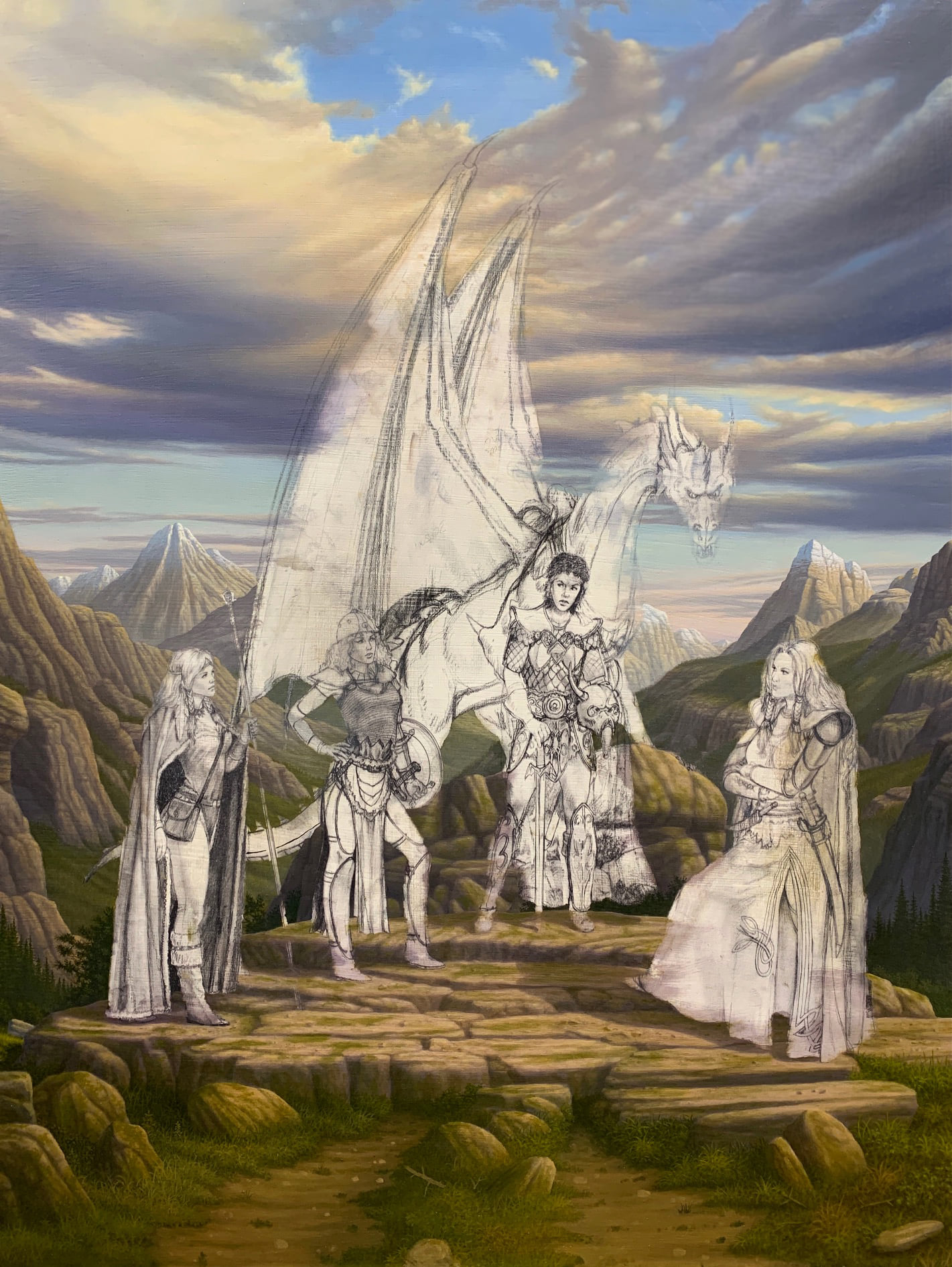 I was at a con trying to get elmore's autograph along with Easley's. The latter instead drew a dragon on the inside cover of my rules cyclopedia. While I was there a guy wanted to hire Elmore to draw the cover of ihs new RPG. Apparently the cost was in the high four figures. And he paid it

This sounds like one of those funds raising calendars like the women of curling. The women are usually nude though.

I met Elmore at DragonCon in Atlanta. I think he was there every year I went. One year I bought his art book (signed) as he had a number at his table. I told him I, like many, loved his Red Box cover and that I wanted him to sign my coverless Red Box DMG and I'd bring it the next year. He actually remembered me the next year when I brought it. Also had him sign a near mint boxed set I had purchased on Ebay.

dave2008 said:
I think some of his DL paintings just feel very posed and stiff. Not to mention I don't like his dragons very much. This could easily be the result of rate of work they were expected to produce.

Now, he has some classics too that continue to hold up IMO. Like this one:


One of my favorite D&D related paintings of all time.

Funny, I have a similar feeling about Elmore's works. I'm not crazy about his "posed" pictures, but some of his action stuff is lovely. His Dragon Magazine covers made some serious impressions on a young lad. Mr. Elmore in person is an amazingly pleasant fellow who always takes time to talk to fans at conventions. He's super nice and autographed my 2e PHB on his interior piece.

Dire Bare said:
Larry Elmore is a fantastic fantasy artist, but . . . . I do think he peaked at some point in the 90s. I absolutely love most of his early work, but his later work isn't up to that standard, IMO. You can see some of it in his early work too, characters looking stiff, not quite in proportion to others in the picture, an overly "staged" look . . . .

I almost feel blasphemous holding that opinion, as his best work is so emblematic of my introduction to the game!


Larry suffered a stroke in 1991 causing him to basically reteach himself how to paint. He took that opportunity to try and revise his style (losing the signature "big eyes" on his characters for one) in the process. As a result his art from that point on was never quite the same.

I love Elmore, but he still just hasnt moved far away enough from the chainmail bikini (he was pretty bad for that back in the day).

I also dont recall him ever drawing an unattractive or overweight protagonist, especially a woman.

His characters always look like they've stepped out of a Victorias Secret calendar, chucked on the barest amount of armor to be functional, and then posed in a sexy manner for the camera.

Kitiara in particular needs to be pained to show her being a badass. She needs scars, and a hard edge.

MartyW said:
Funny, I have a similar feeling about Elmore's works. I'm not crazy about his "posed" pictures, but some of his action stuff is lovely. His Dragon Magazine covers made some serious impressions on a young lad. Mr. Elmore in person is an amazingly pleasant fellow who always takes time to talk to fans at conventions. He's super nice and autographed my 2e PHB on his interior piece.

Nice! Paladin was always my favorite Elmore piece--I have two prints of it.

Sultan Of Smut said:
This sounds like one of those funds raising calendars like the women of curling. The women are usually nude though.
Click to expand...

Welcome to the boards, hope you come back often and contribute.

I see people laughing at my last post, but I try to welcome all new members first post when I see them. I can kind of see where people may think I was poking fun.

D&D General What Happened To The New DRAGONLANCE Trilogy?
4 5 6 7 8