Staff member
Went to the Farmers’ Market again. The guy selling microgreens had sunflower and onion sprouts today, os I grabbed some of those in addition to my usual broccoli and radish spouts.

Onion spouts are my favorite microgreen, but they’re VERY hard to find, I sometimes go a year without seeing them in stores. So I don’t mind voting with my $$$ to encourage this guy to bring more to market.

The sunflower sprouts were a bit of a revelation, having a nutty flavor along with the herbal.

And when I got home, I put those two on a sandwich with radish sprouts...very good. They paired well with the shaved eye of round and onion chees, Mayo, brown mustard and onion roll. The greens combo was good enough I may try using them to make a purée or aioli of some kind. 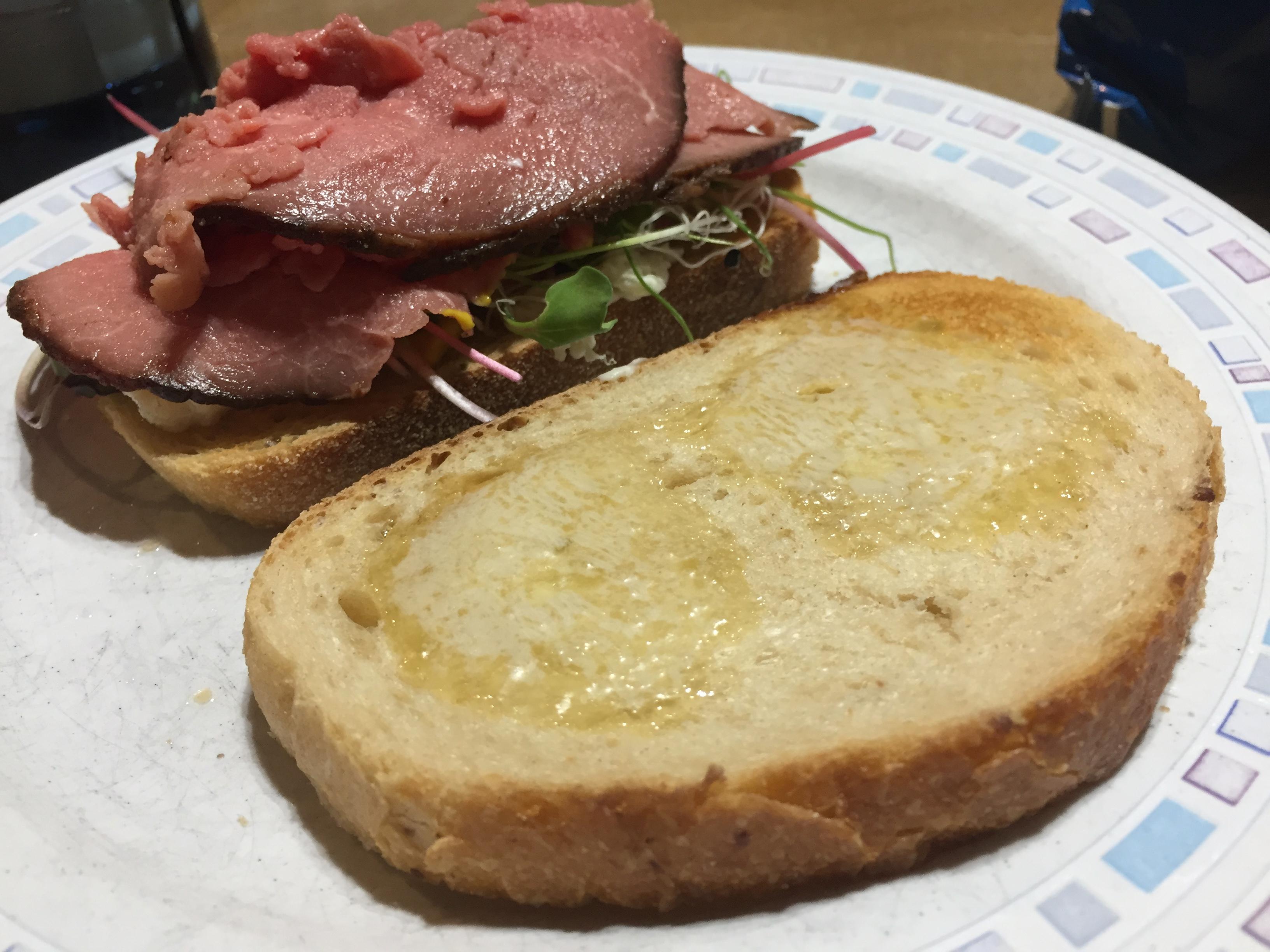 I'm late to this thread, but last night I had:

It was the best burger I've had in recent memory.

CleverNickName said:
I'm late to this thread, but last night I had:

It was the best burger I've had in recent memory.
Click to expand...

I don't dig on swine, but peanut butter on a burger? That sounds interesting.

Something I do sometime is take the hard crisp bread, then butter, lots of grated cheese, then finely chopped red onions on top, and coarsely grounded black pepper.

Ulfgeir said:
Something I do sometime is take the hard crisp bread, then butter, lots of grated cheese, then finely chopped red onions on top, and coarsely grounded black pepper.
Click to expand...

Cold or hot? I mean, is the bread toasted? The cheese melted?

@Dannyalcatraz It is of course served cold. The cheese was a type called "prästost". A rather mild cheese, that according to legend got its name from the kind of cheese that was given by the farmers to the priest as a tithe (taxation), in ye olden days. 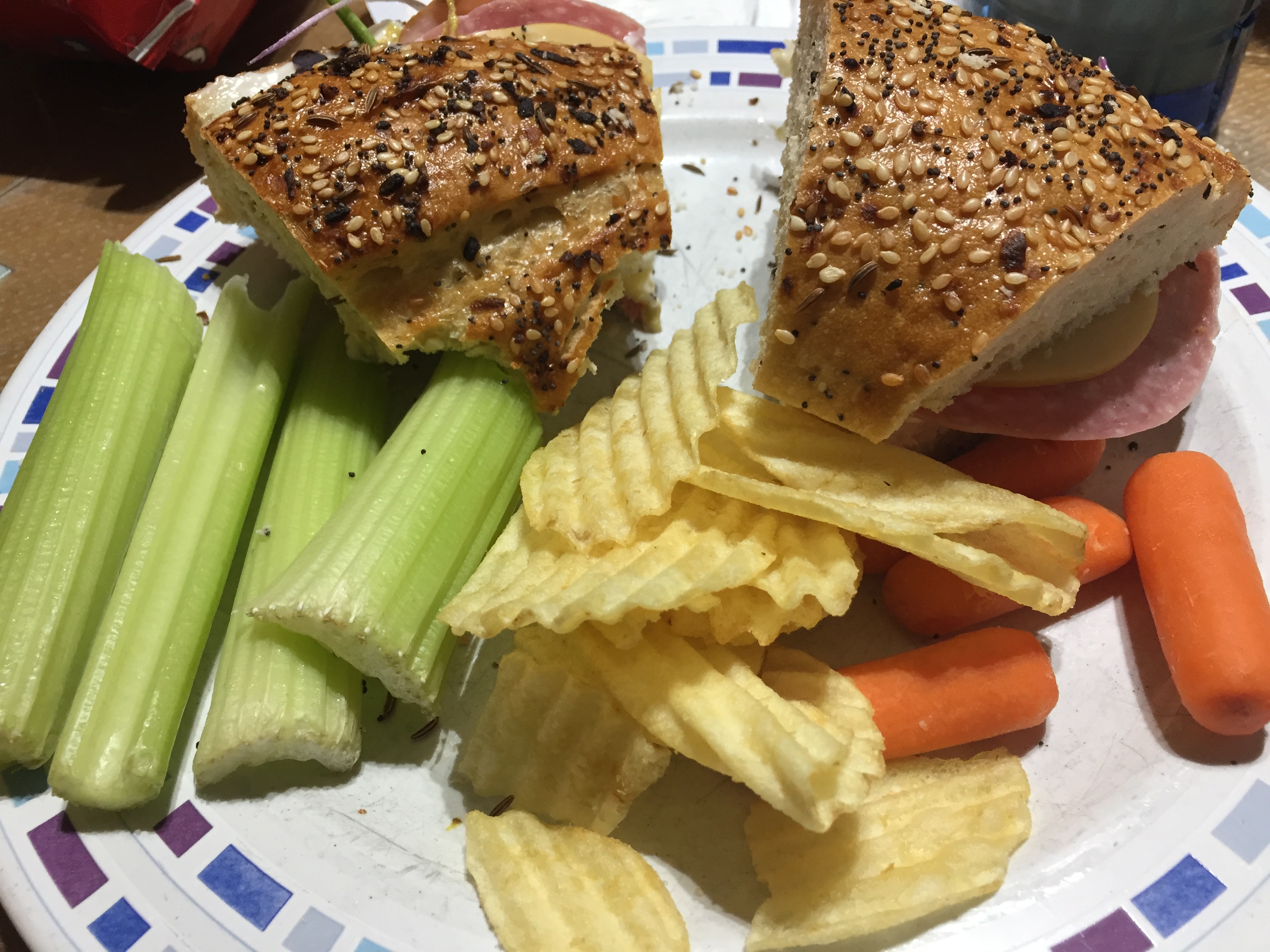 Market Street grocery store has recently started trying out a whole bunch of new breads in their bakery. Their marble rye was pretty good. Today, I tried something different.

I bought a ring-shaped bread @11” across, topped with all the stuff you see on an everything bagel. But the bread was a softer dough than a bagel.

I quartered it, then took a section and sliced it open. Mayo & brown mustard were the condiments. I sprinkled a pinch of black pepper on the interior. Greens were radish sprouts and baby spinach. Cold cuts were 2 slices each of Black Forest ham, Genoa salami, and smoked Gouda. Once assembled, I sliced the quarter into eights for manageability.

Sides were baby carrots, celery stalks, some potato chips and an onion dip.

The sandwich was outstanding.

Thing is, after I finish this loaf off, I don’t know what will happen next. There’s no guarantee Market Street will continue making the bread. And as good as it is, I don’t know if others in the family will be interested in it- Mom, for one, rarely eats foods with tiny whole grains because of her dental work.

Did a decadent little thing the other day. I fried chanterelles in butter, and lots of black pepper. Then put that in a wrap, topped with red chili, a thinly sliced leek, and acacia honey... Image before I rolled it up. 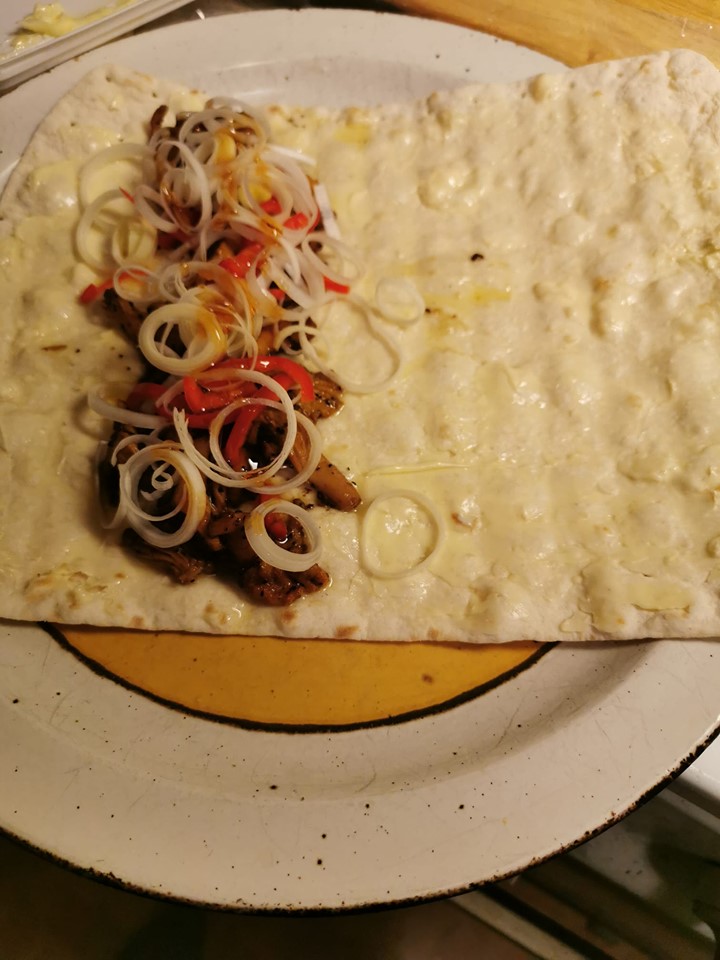 Staff member
A vegetarian sandwich? Looks like a good’n, too!

And only the chanterelles were sautéed? Not the leeks?

Dannyalcatraz said:
A vegetarian sandwich? Looks like a good’n, too!

And only the chanterelles were sautéed? Not the leeks?

Yup, only the chanterells were fried. The chili and leek were fresh (they were there to provide some texture, and a bit of diffeence in taste). It was a very sweet sandwich, due to the honey and the chanterells being fried in butter, but very good. 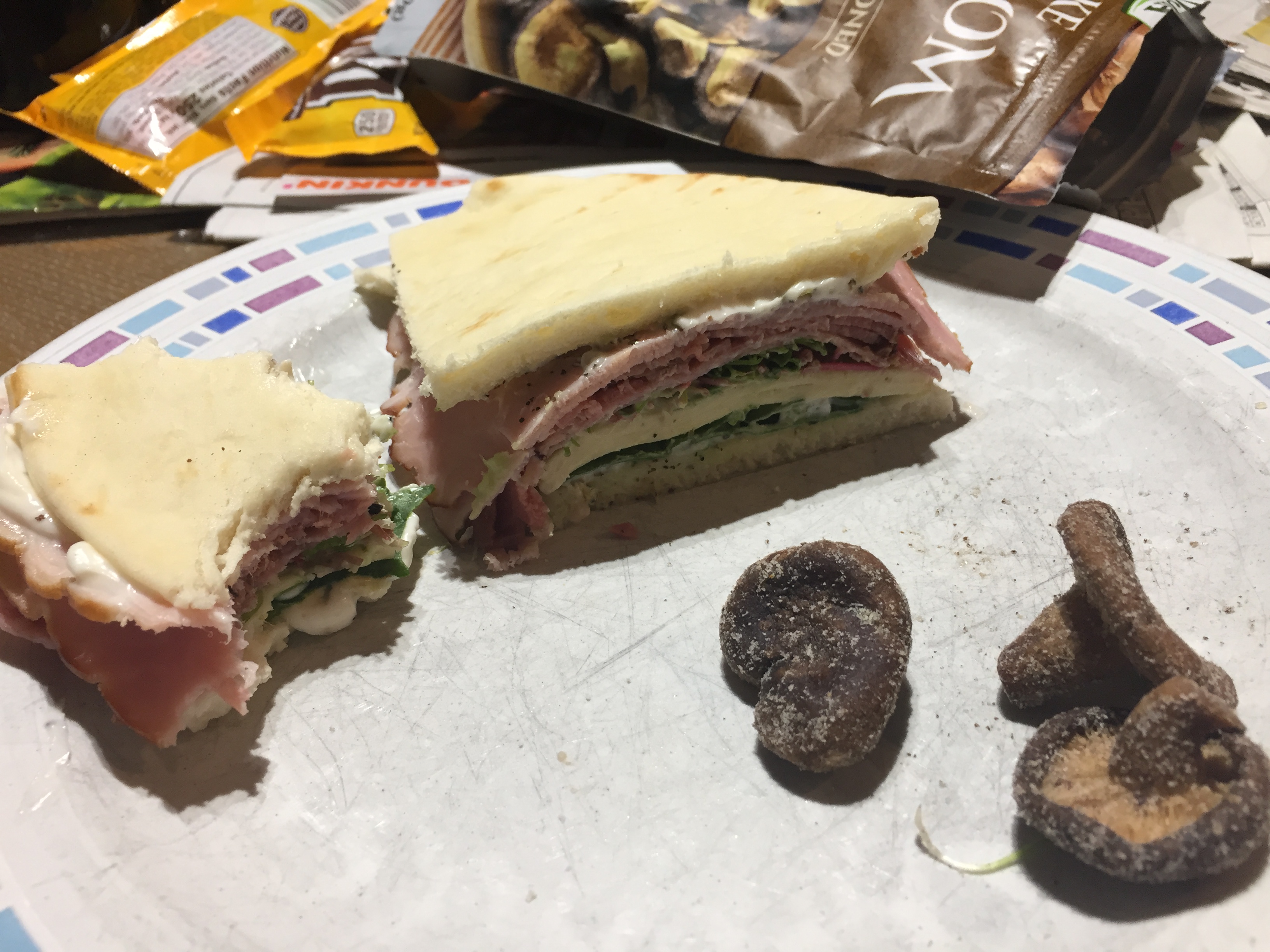 That is a meal owing a great deal of its existence to the local Farmers’ Market.

The pita comes from one of those vendors. Next, there’s mayonnaise sprinkled with black pepper and oregano leaves. Then there’s a layer of baby spinach. Then Dietz & Watson Smokehouse Onion Cheddar. Onto that is spread basil-garlic spread (from the pita vendor). The next layer is radish and garlic sprouts (from another farmer), drizzled with just a little red wine vinegar. The meats are Boar’s Head Genoa salami, low sodium roast beef, and Black Forest ham.

The side was a small pile of shiitake mushroom crisps, and dessert was a handful of Wakym’s Temptress cookies- yet another vendor. 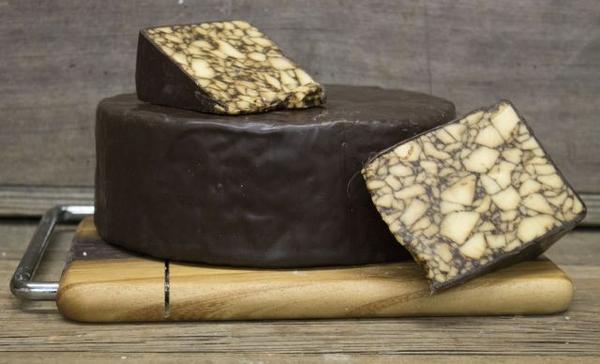 A few days ago, I did a similar sandwich, but with Black Forest ham, dijon mustard, and Cambozolla black label blue cheese. 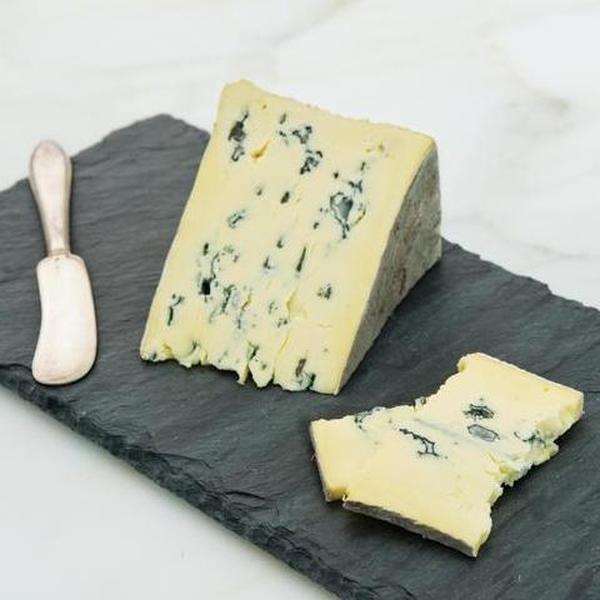 I had an excellent Cuban mix today.

Staff member
From the “They can’t all be winners“ department:

Just the other day, I made a sandwich using white bread because my onion rolls gad a blue spot. I have nothing against white bread, and even orefer it for certain sandwiches, but should have taken that as an omen.

I wanted to go in a slightly Mediterranean direction, so after the mayo, I layered spinach, a dusting of black pepper and Genoa salami. To that, I added garlic sprouts, onion cheese, basil garlic spread, and a hint of yellow mustard. Lastly, I put some olive bruschetta.

All ingredients I’ve used before, in many combinations. Hell, sandwiches like a Schlotsky’s Original or a classic muffuletta have similarly complex mixes of similar ingredients.

Those work. This didn’t.

The bread wasn’t right, but it wasn’t the culprit. The balance of flavors was just not right, and that’s about ingredient ratios.

I was trying to avoid piling on too much meat, but there really was too little salami, and it got lost. Similarly, my restraint with the onion cheese meant it’s presence was almost unnoticeable.

On the flip side, I put WAY too much of the basil garlic spread, and it overwhelmed almost everything else.

And the olive bruschetta was oily, as such things always are. I should have either drained it OR placed it directly on the bread, which would absorb the oil. But I did neither, so the oil seeped out of the sandwich, making for an unstable mess.

Still, the concept was sound. Correcting my mistakes could lead to something pretty good.

I didn't know we had a food blog.

Yes, I know the bread is a bit of a let down, but sadly about seven years ago I discovered that my aging intestines and wheat were going to have to part ways. I can only eat the good stuff now as a rare special treat. After trying a lot of GF breads, that's the best of the bunch unless I can get my wife to bake.
You must log in or register to reply here.
Share:
Facebook Twitter Reddit Pinterest Tumblr WhatsApp Email Link
Forum list