Would You Get A D&D Tattoo?

How much of a D&D fan are you? Not as much as this guy, I'll warrant! D&D fan Sean Whissen has gotten the D&D ampersand tattooed onto his forearm. Sean posted this to Twitter with the caption "Check out my new ink!" 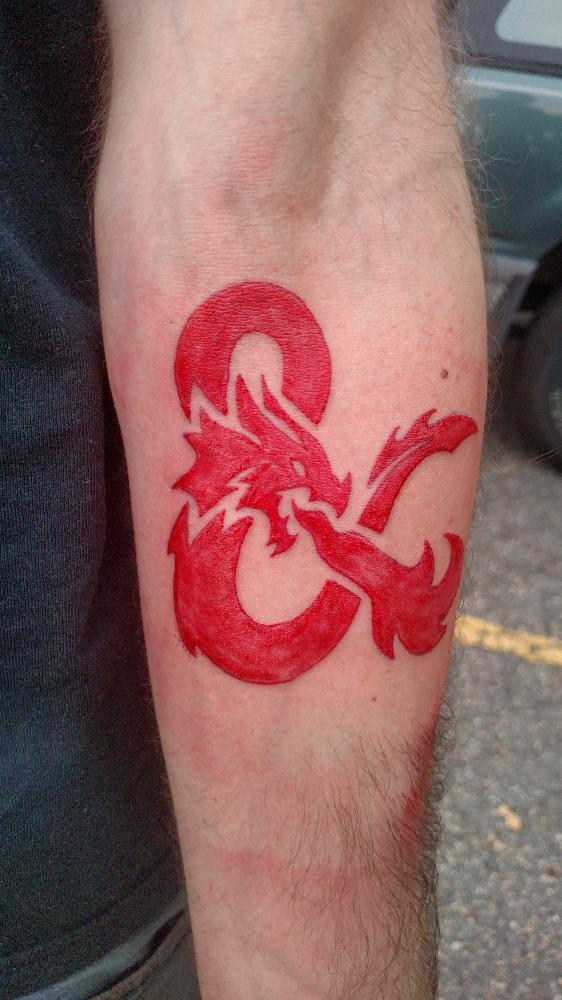 Bet he's going to be furious when they change the logo again...

I hope it was one of those "lick and stick" tatoos that come in Cracker Jack boxes.

Not the nicest tattoo I've seen, needs to be touched up.

Just jokes and hate? Where's the love?... I like it. Rock on for representing what you love, dude.

Awesome! I'm surprised the artist didn't outline it in black...

Cool idea if you like tattoos, I'm too picky to ever get one.

And in typical fashion people bash a pretty epic tattoo. Stop being ashamed of your tramp stamps.

I would get a D&D tattoo... But I don't know what.
Maybe a d20 or something along those lines.
Where is another issue... Hmm...

Like....half the people I know have D&D or gaming tattoos. I don't, but that's entirely due to a fear of needles and tattoo parlors that might be less than clean. I even helped my ex-first-wife design tattoos for her favorite D&D characters. My current (final) 3rd wife has a arm-length tattoo of the vampire from this book cover in the link, using the exact art depicted.

I don't see any hate. Just saying the artist didn't do the best job on it IMO.

Serious answer: they're not for me. I simply can't envisage anything being so important to me that I'd want it indelibly marked on my skin. That may change if/when I have children, but I suspect not.

But if you want a tattoo, go right ahead. It's your body; it's your choice. And nothing to do with me.

I don't know if I would get it that large!

It is very nice. I change ideas all the time, but this is a solid tattoo choice. What artist?

And: why the Ampersand for 5e? What does it mean to them specifically?

also: It's red now because it's fresh; think it'll turn green when he washes the gore off? ;p

Needs a touch up but nice idea. I'd not be opposed to a similar once, the 1e AD&D logo is the only one I care about, but not quite that big.

I don't understand the tattoo mentality. My wife has one on her hip, but she admits she just did it cos she was young ,stupid, and now wishes she hadnt..As a guitar player, many people I know have them....:shrug:...whatever floats their boat, but a Tshirt works for me just fine, thanks.

AriochQ said:
I don't know if I would get it that large!
Click to expand...


What frightful presence! Probably an Ancient Red. Now he has Legendary Resistance, good on him! Tiamat is pleased.

My friend has got one but his tattoo is smaller than Sean and it is black. It make him so cool.
I would like to get a AD&D tattoo but not now. Anyway, I like AD&D Logo.

Well aside from the fact that I wouldn't get a tattoo for any reason, if I really wanted to show my fandom of D&D, I'd wear a T-shirt with the logo (which I sometimes do). Besides, I'm half Japanese, and my Japanese relatives would think very little of me if I got any kind of tattoo. Even today, in Japanese culture tattoos are considered a social faux pas. A tattoo is still considered a symbol worn by members of the Yakuza, and people of their ilk.

An American friend of mine went to Japan for work related training, and while there, he visited a public bath house, but as soon as his arm tattoos were exposed, the management asked him to leave, as they considered allowing tattooed customers as being an affront to their normal clientel. While there are certainly tattoo artists in Japan, they aren't allowed to advertise with signage nor allowed phone book ads, working by word-of-mouth only.

-Some of the runes from the Greyhawk folio

-The Tyranny of Dragons symbol (holy moly, I got this one on the back of my calf, right below the knee, and it hurt like none of my other tattoos ever have)