JharyOConnah said:
The hobgoblin attempted to back into the corner to no avail. He spat and sputtered. "Jush one! Jush one!" He had his hairy hands up and dared not make any sudden movements.
Click to expand...


Menacingly, Selythin continues his interrogation “You are cooperating, good. I’m sure you are noticing that you’re still alive. Keep it up. Tell me about this “one”. Who is he, what does he do? And what about those fiends, any more of them here?”

Alan looked to his left, then his right, then pointed at himself. First a princess and now a queen? he thought. Okay. I need some answers.

"Everyone insists that I'm a princess or a queen or some kind of feminine royalty and - look, I have been through a lot. You are asking me to take a lot on faith, including the notion that everything about my life, down to my gender and my ancestry, is not what I thought it was. I - is there any way you can prove to me that I am who you say I am, this Aloe. If I'm under some spell that disguises me, I'd like it undone. If there's something I have to do... I just want proof." He shook his head. "That's all. Just some way to know."

It was difficult to understand the brute's accent, but it was obvious he was saying his boss was above.

The hunched little pixie, Oovin, the former grand vizier to the now-dead-queen sipped at the water one more time, panting.

He gestured at the hobgoblin, then he spoke again:

"I think the hairy jailor means the guy upstairs. His boss...some pompous wizard who thinks that Chaos's blessings will last forever...His name's Fib'Karna. We fought. He killed the queen so Chaos gifted him YOUR kingdom...princess...err...queen...Aloe..."

He looked around, at Alan and Selythin, Page and Eovin. Sighed loud. A tear welled up in his eye.

"As for proof...and the powerful illusion which protected you, cocoon-like, until now...If we can reclaim my wand...The Grand Vizier's Rod...which, unfortunately is upstairs in Fib'Karna's clutches...THEN I could remove the magic and reveal your destiny..."

He looked at Eovin, still hovering nearby, rubbing her head after the good whack in the hallway. She muttered something about a welt.

"As for you, Eovin, I suspect you suspect what I suspect...err...My name is Oovin...I'm your kin. The Grand Vizier's lineage is in your blood...magic...destiny...If things would've worked out better I would've come and brought you here myself. Unfortunate. Unfortunate indeed. Your folks would've been proud you made it here all on your own anyway...And to help your dear, decrepit old uncle..."

He looked around at everyone, sniffling wildly. "Does anyone have a hanky?"

Page looked around. After a moment cousin Zenythin produced a handkerchief. "Keep it..."

Oovin blew his nose loudly, a weird sound reverberating about the small dungeon, before he continued:

"So...simply put...Aloe...queen...Eovin...vizier...your destinies shall be fulfilled if you can just retrieve my rod from Chaos' thrall, Fib'Karna...He's taken over the queen's chambers above...with rod in hand I can remove the magic illusions which blind you. You'll see! In the meantime...I'm too old for fighting. And there will be more fighting...I'm sure there are more Chaos beasts...He summons them from the tainted rod...But no more fighting for me...Is there somewhere safe you could escort this old pixie?"

"This place seems to lack comfort. But it is certainly safe," Eovin says. "Outside the tower is no more safe that inside with these Chaos Beasts, I'm afraid. I doubt you want to come with us."

"The Grand Vizer's rod." Alan nodded, and ran a hand through his hair nervously. "It'll undo this... it doesn't feel like an illusion? But... regardless, it should probably be on our side."

He sucked in a deep breath. "What else do we need to know? Guards and other mercenaries? How many chaos beasts can he summon?"

The wrinkly old pixie, Oovin, blew his nose again...loudly. He looked up at Eovin. "I suppose you're right, dear. A sufficient read of the situation...Seems you'll be a good grand vizier to princess...err...queen Aloe here... I'll stay here where it's safe. Perhaps you could remove the hobgoblin and leave Page... I'd feel less like I'm in prison..."

He glanced at the still-cowering jailor. "Not that it hasn't been REAL old chum... I'll remember you always!"

Then the old pixie shifted his gaze to Alan. "No doubt, princess, there are more hobgoblins above. Couldn't be more than a handful, though... Although I have been locked away, I get the distinct feeling Chaos's main body has moved on... There will be more beasts, however... Who knows how many the corrupted rod of the vizier can create... Be prepared for the worst, your highness..."

Zenythin lounged against the wall nearby and gave a loud sigh. "Any chance of figuring out where the hell we are or a way back home?" He spoke to no one in particular, but glanced at Selythin and raised his eyebrows to punctuate the remark.

Page moved across the room and took a seat next to the old pixie Oovin.

Selythin thinks out loud “We need to know what’s up there. And we need to get to that rod fast. Do any of you have the ability to scout discreetly to find who’s there and where the rod is?”

Alan frowned. "I suppose I can try... stealth isn't really my thing, but I've picked up a little here and a little there."

(You can send one person ahead or all stealth to the upper floors. Go ahead and give me a Stealth check whoever goes. If you all sneak up, I need two out of three to succeed. )

"I'll go with you," Eovin says. She flies closer to the ceiling and slightly ahead of of Alan.

Eovin, guided on the wings of fate and on her own wings of course, flew through stairwell after stairwell, chamber after chamber. She kept to the shadows and rafters above. The more she looked around the more deeply hidden memories began to burble up. The pixie remembered being here before, a long time ago, when she was a child. It was all eerily familiar. Except now, everything was broken. Destroyed. Burned. 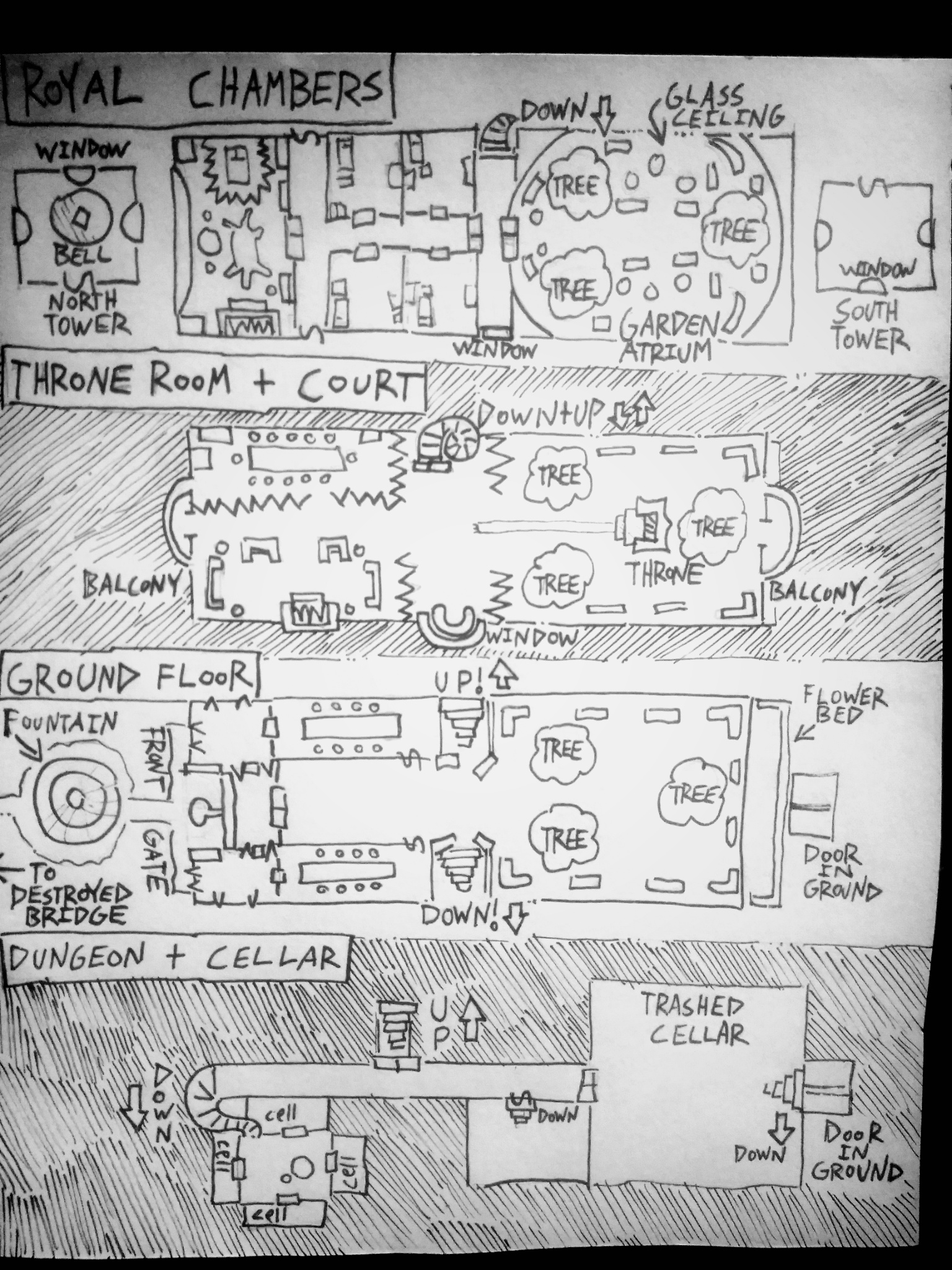 (Take a look at the map, players. You started at the bottom, so you've explored the cellar and dungeon. Gotta go up to the TOP to get to Fib'Karna. Those trees on the ground level are large and wind through the floor all the way up to the ATRIUM on the top floor. Hence they can be climbed or traversed to get from floor to floor. There are also windows on each floor, many already shattered and broken. You could easily fly or climb between floors that way as well.)

Eovin was certain she could sense more shadowy, chaos-creatures lurking about, but she moved quickly through, just to get a good sense of the entire place, in order to report back. She could tell there were a few slithering among the trees, more behind as-of-yet-unopened doors.

Oovin and Page stayed tucked away in the lower recesses of the dungeon.

Alan, Selythin, and Zenythin lingered near the stairs leading up to the ground floor until the stealthy pixie returned and gave her report.

(Eovin give me a Perception Check for a few more details. Everyone, lemme know if you've questions about the map. It's a little funky. )

Eovin was certain there was a winged-snake with arms and claws in each tree. She also caught a quick glance at a centipede-like tiger crawling through the darkness on the top floor. (That's three trees that go from ground to top floor. Three chaos creatures. Then a strange, eight-legged-panther lurking in the shadows of the atrium at the top of the trees, being a fourth.)

The little pixie also heard muffled cries coming from the front chamber of the ground floor. Heard crying coming from above as well, but the doors were locked.

To be able to get to either voice they'd have to pick the lock or break the door down.

Everyone gathered to hear Eovin's report heard the same tell-tale cackling, mad laughter coming from the dead queen's chambers at the very top.

Selythin orders Alan and Zenythin to guard the hobgoblin as he checks the cells and how they could potentially securely contain a prisoner. He gathers the appropriate chains, locks and keys, and tests the best setup to ensure that he’d stay put.

He was a liability. Secretly, Selythin hopes that the hobgoblin gives them a good reason to kill it.

Selythin finds, after a few moments of trying various keys and locks, that all four of the cells are in working order. Selythin was certain the hobgoblin jailor wasn't going anywhere.

Zenythin drew his sword and pointed it, but laughed as it was obviously unneeded.

As for the sniffling hobgoblin himself, he didn't put up a fight. He plunked down, resigned, in the corner.

Upon hearing the scouts’ report, Selythin ponders “we need to get to Fib’Karna fast, silently, and have the element of surprise. Are you all ready to follow me and climb and fly to the last floor?”

(Go ahead and take that Short Rest, roll hit dice if anyone is missing any HP at this point. After that, going up to the ground floor, go ahead and give me a Stealth check for the three main characters Eovin, Alan, and Selythin. Two out of three successes and you can move into any area of the ground floor you choose, but remember most doors will need to be picked or broken down to get through.)

Cousin Zenythin went to mid-staircase where the cramped hallway bent down into the dungeon level, still containing the old pixie Oovin, Page, and his hobgoblin jailer. He stretched and leaned against the wall, yawing. "As I'm not hurt, I'll take watch. Relax. I've got us covered..." He drew his sword and lounged on the dark stairwell.

Selythin struggles to be as quiet as possible because of his armor.

Alan fared somewhat better; he was no born rogue, but he seemed to have picked up a trick or two in his time.