Their goal was to reach the Uldoon trail about a third of the way along its route, as it rose northward as it travelled east. East by south-east they travelled, and the winding criss-crossing old roads were a constant frustration to Hawthorne who set the route, and to Broun, who drove it. But they had no major setbacks in their navigation.

On the following day, they passed the ruins of Durlag's Tower. Many tales were told of the place: Dwarven treasures; fiendish traps; and undead or demonic horrors. It stood, quiet and crumbling, on its barren hill of volcanic rock. Broun was happy to turn the horses away from that place.

Two days later, they were reaching the outskirts of the Green Fields - leagues upon leagues of rolling grasslands. The coach travelled quickly on a good stretch of road - as much as six miles per hour without pushing the horses - but they took frequent breaks. Ruznami calculated that they were making forty miles per day, on average (though perhaps not all of it took them closer to the Uldoon Trail). Still, Hawthorne was satisfied with their progress.

The coach had slowed its pace to work its way up a short but steep hill. Broun was driving, with Crock Jon beside him. Shedrick was standing on the footman's board outside on the rear of the coach, and the others were inside, seated on the two comfortable benches (Argenti was in her amulet).

Suddenly, the gravel of the road heaved as the coach rolled over it. The horses pulled one way, and then another and the coach lurched. Broun kept the whole thing under control with ease, but he had not had time to fully grasp what had happened when Shedrick gave out a cry from the rear.

From the footman's only vantage, after the coach had gone over some sort of growing gravel lump, the road burst open and a massive cone-shaped head emerged, all teeth. It lunged at him, and it would have eaten him had he not grabbed with both hands onto the brass handle (which he normally held to keep himself on the board) and he pulled his lower body up as the creature snapped powerful jaws at him. The creature put its front, clawed feet on the footman's board as it reached for him, and it was heavy enough that the coach tipped down toward the rear, raising the driver's seat.

From inside, the creature's large claws made a raking noise along the back wall, loud enough to drown out Shedrick's cry. Not sure what else to do, Broun began to pull the horses to a stop. Still, there was enough forward momentum, that the creature, now fully above ground, fell off the board and the coach dropped its weight to the front with everyone shaken inside. 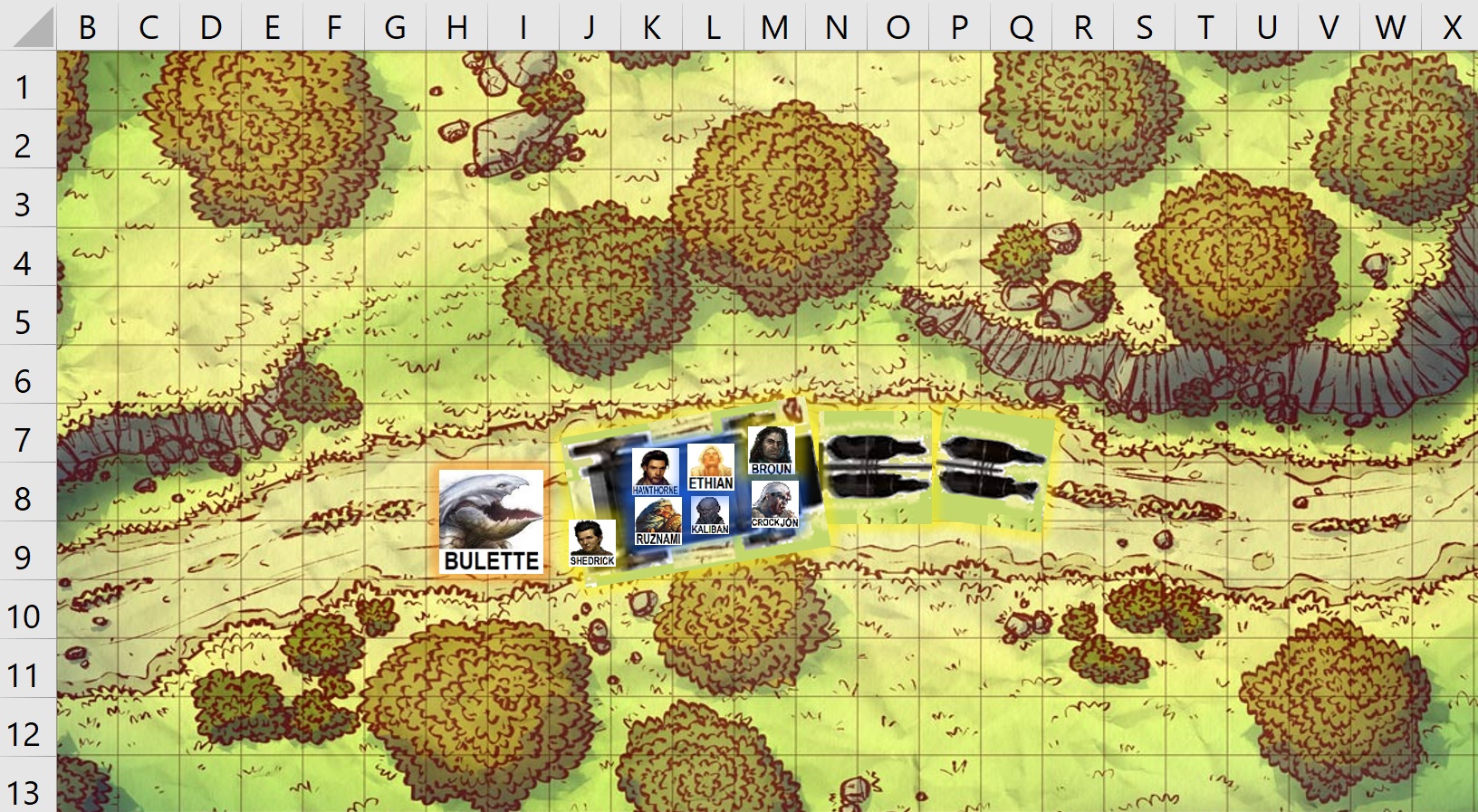 Supporter
"Keep goin', Unc," says Crock Jon as he drops out of the cart and makes his way towards the beast. It towers over him, but not so much that he doesn't think he can get his hands on its hide. He reaches out, to try to hold the thing in place. It strains his muscles to do so. He is not sure if what he's grabbed is carapace or soil.

Crock Jon hopped down from the driver's perch as the coach slowed to a roll. He moved down the side of the road to the rear and when he saw the enormous hard-shelled creature, he took hold of its head plate and pulled...

Ruznami was jolted awake as the coach rattled and bounced, tossing him from his seat. The wizard groaned and clawed himself rightside up as he pulled his wand..

“What’s going on?” he asked, hearing a roar from behind them. He opened the coach door and quickly jumped out to see a massive creature had erupted from the earth behind them.

“Ogham preserve us,” Ruz muttered, and cast a spell. Suddenly three more Ruznami’s appeared, and his arcane ward sprang up around him as the new half-orc member of the party rushed passed and actually grabbed the beast.

"What in the world?!?" Hawthorne shouts as the carriage bounces and bounds. Once it comes to a stop and he can look out the carriage window to see the huge creature behind them, he gulps once and reaches for the door handle to fling it open. "We've got company!!!"

Hawthorne bounds down the steps of the carriage and tumbles in behind one of the trees to try and get out of the bulette's view... but the cover is not great and he doesn't think he gets himself very concealed. Once there Hawthorne simultaneously pulls out Argenti's necklace to allow her to re-appear, while also getting out his crossbow and loading it up ready to fire.

The cacophony of claws, screams, and erupting earth reached Argenti in her necklace. Unsure of what was going on, she apparated next to Hawthorn behind the trees once she heard his call for action.

Taking a quick look at the situation, she couldn't miss the large beast struggling with Croc Jon. "By Geb, what kind of creature is that?"

Without further delay, she retrieved her amulet from Hawthorn, and let a glowing rock fly at the beast. "HWOA!" Only for the rock to bounce harmlessly off it's shell.

While Broun brought the horses under control, Ruznami exited one side of the coach while Hawthorne the other. The dwarf became surrounded in a crowd of illusions while the mining agent brought forth Argenti's amulet. The genasi appeared and took her amulet, while Hawthorne took cover under a tree where he loaded his crossbow. Argenti's stone had just skipped off the back of the beast as it wrestled with Crock Jon, when the ground under the tree trembled and burst open.

A much smaller version of the monster crawled out of the hole, squawking. It lunged forward and clamped its jaws on Hawthorne's leg.

Kaliban follows the others from the wagon. He sees the bullette and moves to assist. He is shocked when Crock grabs it by the head. Kaliban draws his sword and moves up slashing at the creature. Kaliban hesitates not wanting to accidentally hit his new companion. The slight hesitation throws off his strike and his rapier bounces off the creatures thick hide.

Ethian barely had time to wrap his mind around what was happening, when he saw Crock Jon grab the beast. Incredulous, he shook his head after staring for what seemed as an eternity, considering the events at play. He climbs onto the coach to better assess the situation, and prays for twilight to embrace them all

Kaliban followed Ruznami out the right-hand door as the coach started to move again. By the time he was down by the monster, Shedrick had pulled past him, holding himself up by the brass handle, out of reach of the creature's jaws while Crock Jon held it back. Kaliban thrust his thin blade, but it scraped harmlessly off.

Meanwhile, Ethian had slipped out the other door. The coach was not moving fast, but it was moving uphill. Ethian grabbed the doorframe and rolled up onto the roof. He was not as graceful as many elves, but he was fit and had spent enough time at sea that the movement of the coach did not upset his footing as he prayed, bringing protective twilight down on them all.

The beast thrashed about under Crock Jon's mighty grip and it opened its mighty jaws and lunged at him while flipping him into the air. The big half-orc still had a hold of the thing's head, but much of his lower body was in its mouth in a crushing grip. 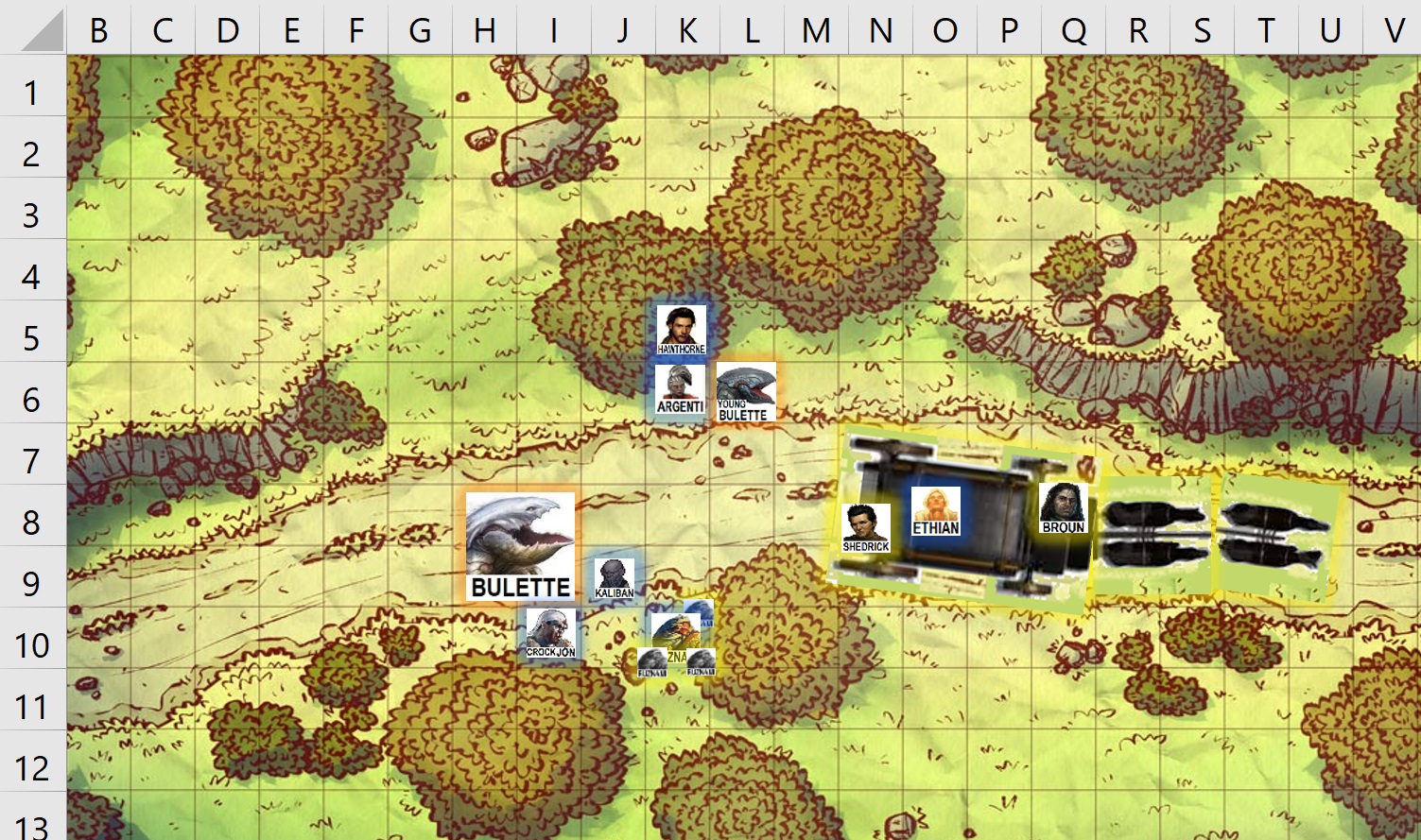 Kaliban watches the bullette start to chomp down on Crock and instinctively uses his telekinetic powers to shield the orc from some of the damage.

After assessing the situation, Ethian carefully gets off the cart and sends a prayer to Sehanine asking her to bolster his companions.

Ruznami pulled out his warhammer and stepped up between Crock Jon and Kaliban, eying the adult bulette. He heaved back and struck at the creature, but missed completely.

Archimedes swept down, getting into the bulette’s face, helping Crock Jon.

When he was out of danger, Shedrick banged his flat palm on the rear of the coach and called to Broun, "Pull up the hill a little ways and give us a stop!"

The big coachman followed his instructions, bringing the coach to a slow roll, then a full stop.

Shedrick helped Ethian down from the roof, and the elf moved back toward the fight, praying for Sehanine to aid his companions. Meanwhile, Shedrick pulled a crossbow from the coach's boot, loaded it, and fired at the smaller of the beasts, striking it. The thing squawked in dismay, enraging the larger one.

Supporter
The jaws of the bullette sink into Crock Jon, and the man roars.

The first thing he notices is that it doesn't have teeth: that the hard shell of its skull extends into a jagged edge that leads strait into its mouth. No jaw to hit. The fingers on both hands have clamped into the creature, and he feels the legs attempting to pull it away.

The second thing he notices is Archimedes, flying around and distracting the massive creature. Crock Jon feels relief, and a renewed strength and healing from his new friends' assistance.

Slowly Jon steps back along the road they had just travelled, dragging the monster with him. Slowly, pacing, until the fingers of his left hand find purchase between two plates in the creature's hide. That gives him the opportunity to start punching the beast.

Argenti balks as a second creature ambushes Hawthorn and herself. "The earth betrays us! How many of these creatures are there?!"

"Kiar!" With a word, the pup visibly slows as rocks attach themselves to it's shadow. With a flex, the genasi's fingernails grow into long needle-like claws. With a stab, the needles find their way past the beast's armored plates and inject a burning concoction into the pup's flesh, before retracting back into the woman's hand.

Argenti clawed at the smaller of the beasts, who squawked again and tucked its hard nose into the ground. Dirt kicked up all over Hawthorne, and the creature was gone, somewhere underground.

Crock Jon and the larger one struggled locked together. It seemed near impossible, but the former champion dragged the enormous thing down the road while trying to flip it on its back, as it struggled to stay upright and snapped at him in wide-eyed desperation. Finally, it twisted about and got a powerful grip on him. It thrashed him back and forth like a rag doll before spitting him out.