Lands of the People

Another page for the Atlas of D&D Worlds—the continent called the "Lands of the People", from DRAGON magazine #205. This continent was given two suggested placements:

The Lands of the People and Anchorome

Here I've juxtaposed the Lands of the People with the known shape of Anchorome, along with Maztica:

A slight re-shaping of the shoreline of "Baja California" and "Florida" to match the Anchorome map would make for a close correspondence.

Yarth is the alternate Oerth of the Sagard the Barbarian choose-your-own adventure gamebooks. (Yarth references: http://www.canonfire.com/wiki/index.php?title=Earth) Though reportedly developed under Gygax's Dungeon & Dragons Entertainment Corporation, the rights to Yarth are probably not held by WotC. The rights probably rest with Simon & Schuster and/or the Gygax estate.

Here's the four maps from the gamebooks, along with a composite map I made, placed side by side with the Flanaess of Oerth.

WotC doesn't hold the rights to additions that Frank Mentzer has made in his recent self-publishing of Aquaria, but WotC does hold the rights to Aquaria as portrayed in the TSR adventure modules (named there as "New Empyrea"). Even though R4: Doc's Island explicitly says that New Empyrea is located in the Solnor Ocean east of the continent of Oerik, it's questionable as to whether Aquaria still exists in WotC's D&D World of Greyhawk, since it's not portrayed on the DRAGON Annual map of Oerth (shown earlier in this thread). Still, for 5E, Aquaria (or New Empyrea) could be returned to the map of Oerth.

Here's a list of Aquaria-related products. Here's a wiki article about Aquaria.

The Rock of Bral

The Rock of Bral is to Spelljammer as Sigil is to Planescape. A fitting inclusion in the Atlas of D&D Worlds.

There's some controversy as to which solar system the Rock is located in. (See the Guide to the Spheres PDF for an explanation.) The solution offered by Paul Westermeyer in the Guide is elegant: the "Rock of Bral" in Realmspace is really Dragon Rock, while the Rock of Bral (and its canonically associated planets) exists in a crystal sphere of its own: Bralspace. (It also exists in Hackspace, but I'm not getting into that because, AFAIK WotC doesn't hold the rights to Aldrazar even though that world was made through a license with WotC.)

However, another solution is to say that the Rock of Bral exists in both Realmspace and in Bralspace! This is the thinking:


Yes, that means that if a PC traveled through the planes or by spelljammer from one world to the next, and went to those locales, they would experience some major deja vu, and would meet NPCs who had the same name and personality as ones in their own world. That's the way the D&D worlds are.
Last edited: Aug 13, 2014

As part of the Oerth world map, the Atlas of D&D Worlds would include the Sundered Empire, the setting of the 3e Chainmail miniatures game. The Sundered Empire is located in the far northwest corner of the continent of Oerik:

Though this might be treading into the domain of the Manual of the Planes, the Atlas of the D&D Multiverse could include Sigil. Here's a 2E version and 4E version:

This falls into the category of settings which are deeply tied to the D&D Worlds, but which for legal reasons could not be a part of the Atlas...unless WotC made an agreement with Francois Froideval.

Froideval was a TSR designer who co-designed the Master Set map of Urt, which later became Mystara. After he left TSR, he authored the Black Moon Chronicles, a French-language series of comic books which ran from the 1970s, and are now a MMPORPG. This area is located in far western Oerik, south of the Sundered Empire.

The Empire of Lhynn, the Tharquish Empire, Ishtarland, and the Red Kingdom are from the Black Moon Chronicles. These are all on the TSR map of Oerth--see the DRAGON Annual map earlier in this thread.

Here's a map from the MMORPG:

DnDPhilmont said:
Though this might be treading into the domain of the Manual of the Planes, the Atlas of the D&D Multiverse could include Sigil. Here's a 2E version and 4E version:


Maps of Sigil are a must. If there's going to be an Atlas of D&D Worlds then I think Planescape should count.

Beleriphon said:
Maps of Sigil are a must. If there's going to be an Atlas of D&D Worlds then I think Planescape should count.
Click to expand...


I see your point. If it's called the Atlas of the D&D Multiverse then of course it'd include Sigil.
Last edited: Aug 14, 2014

AFAIR, I emailed Wyatt when he first posted the map (back in the 3E era), and sent him a link to a quasi-Sanskrit font, and suggested he change the labels (which were written in an ordinary Roman font) on the map. Looks like he responded!
Last edited: Aug 14, 2014

Clark Ashton Smith's fictional French province of Averoigne is part of the D&D Multiverse. Averoigne is a fictionalized version of Auvergne province.

X2: Castle Amber features the Ambreville family, who have traveled through the mists of Averoigne, and appeared in Mystara. They founded the dominion of Nouvelle Averoigne, within the Principalities of Glantri. The 2e adventurre Mark of Amber returns to Castle Amber.

In the Wrath of the Immortals boxed set (which was the "second edition" of the BECMI Immortals Rules) it is said that the Ambrevilles call their home world "Laterre". Laterre is located in a different dimension than Mystara, called the Dimension of Myth. Laterre is what Mystarans call "D&D Earth".

Here's some maps of Old Averoigne:

Ambreville family members have also shown up in the 2E Return to the Keep on the Borderlands and in Green Ronin's Freeport.

If C.A.S.'s writings are in the public domain now, then the Province of Averoigne could be included on the map of D&D Earth in the Altas of the D&D Multiverse. (Or rather, the medieval and Renaissance map of D&D Earth, prior to the French Revolution which abolished the traditional provinces.)
Last edited: Aug 14, 2014

I always liked this map from birthright

Since TSR won the Dangerous Journeys court case against Gygax, doesn't WotC, as successors to TSR, hold the right to use Ærth?

Anyway, it is a D&D World, even if it's in legal limbo. There are spiffy maps of Ærth, Inner Ærth (a hollow earth), and Phæree (like the Feywild). Note the mirrored continental shapes:


Well, like Lankhmar, Conan's Hyborian Age, Diablo II, Shannara, and Wheel of Time they were licensed D&D (or d20) settings, but WotC doesn't hold the rights to them. So Kalamar could only fit in the Atlas if WotC sought an agreement with Kenzer Co. Except for the legal hurdle, Kalamar and Aldrazar would be two worlds which would be fitting to include.

I always liked this map from birthright
Click to expand...

The City of Manifest (Ghostwalk)

The D&D World of Abeir

For this proposed 5E Atlas of the D&D Multiverse, the WotC cartographer could draw a world map of Abeir, the twin of Toril. Abeir reportedly has steel-gray skies and primordials instead of gods...except that the Mulhorandi (Egyptian) pantheon has been stranded there.

Here's a piece of Abeir--the continent of Laerakond, which swapped places with Maztica during the Spellplague. Maybe they've swapped back for the Sundering? 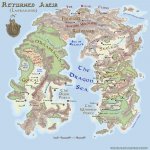 If Edgar Rice Burrough's pulp Mars is in the public domain, it would be in the Atlas. It would be a good excuse for "D&D Pulp" and "D&D Sci-Fi" rules modules.

There were cross-overs with Barsoom in TSR's OD&D era.

The setting of some of the 2E First Quest books.

I interviewed the author Douglas Niles (here), and he said Karawenn wasn't placed anywhere. However, I queried D&D brand manager Bruce Heard (here), and he affirmed that the best place for Karawenn would be in the Kingdom of Norwold in Mystara, since D. Niles was also the primary designer of Norwold.

There's some amateur-made writings and maps about Karawenn here: http://pandius.com/karawenn.html

I don't have a scan of the map from the books, but here's a reconstruction from the Vaults of Pandius (the official Mystara website):

This second map (also made by Håvard, a Mystara aficionado) incorporates Karawenn into Norwold: (Look for the World's End rift; that's the eastern edge of Karawenn. Karawenn extends north to the Trollheight Mountains (a.k.a. the Jotunheimr Hills). The westernmost dominions of Karawenn are Amana (in the northwest) and Ironwoods (in the southwest):

This placement has been reproduced in this map too:


I thought about Ghostwalk ... I always thought that was a cool idea.

D&D General Which material planes do you like in your cosmology?
2 3