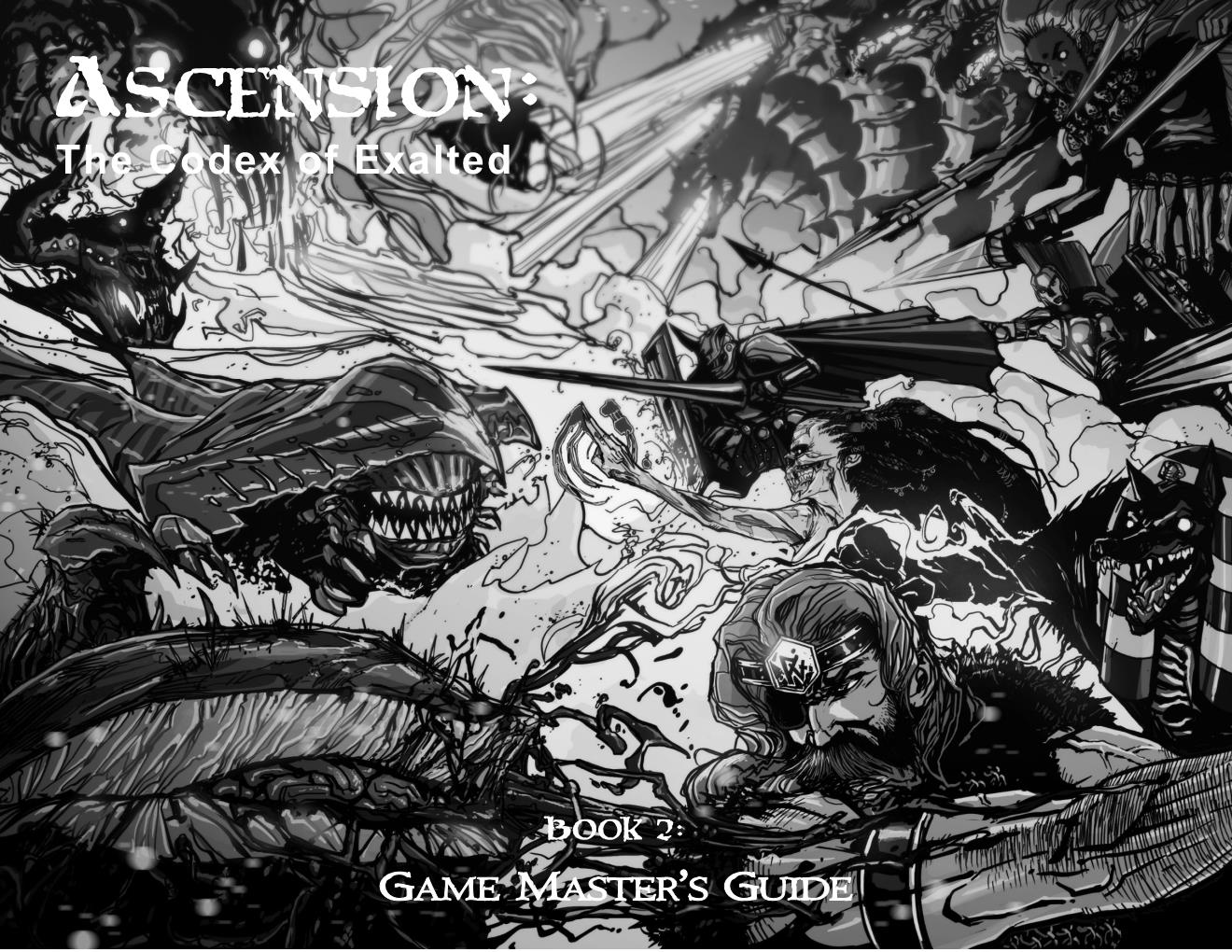 Ascension is my tribute to Epic/Immortal games in Dungeons & Dragons. I grew up pouring over and daydreaming about the gods and monsters that filled the pages of the 1st edition AD&D Deities and Demigods. It was not only one of the foundations of my introduction to Dungeons & Dragons but of mythology as well. The seeds planted by the pages of that book grew into a lifelong fascination with deities and mythology. Soon after I had been captivated by Deities and Demigods. I discovered the gloriously bizarre world of Frank Mentzer's Immortal Rules and realized we aren't limited to contemplating the lives of the gods - we could become them! My goal for Ascension is to bring the wonder and excitement I had for mythic gaming in the early '80s to the 5th edition of Dungeons & Dragons. Throw in a bit of flavor inspired by the 2nd edition's Legends and Lore/Monster Mythology and 3rd edition's Epic Level Handbook, and of course @Upper_Krust Immortals Handbook, and we have the foundation for the definitive Immortals/Epic supplement for 5th edition!

This was originally intended to be a quarterly Zine I funded through Kickstarter. However, the pressure's of creating content I considered print worthy were just to much. I stopped the Kickstarter and I am in the process of refunding the backers. However, I didn't want the work to go to waste. So after discorporation from the physical realm, Ascension arisen as a web supplement! I am currently planning to organize this project in three threads or "books:" Player's Guide, Game Master's Guide, and Friends and Foes. Maybe someday these will get published, but the focus for now is getting this out to the public and getting feedback. Finally, I want to give a quick shout out to all the Kickstarter backers you believed and supported the original project. Thank you for your support and I apologize for not being able to deliver on the original plan. I hope this web-based supplement provides you with the epic options you were hoping for.

Introduction (WIP)
It is the primary doctrine of Ascension is that epic games should not be higher powered versions of non-epic games. Epic 5th edition should not simply be standard 5th edition games played at higher levels, with higher attack bonuses, higher level spells, etc. The inspiration for Ascension, the original Immortal rules by Frank Mentzer’s, read and played almost like a different game than the D&D of the first four books in BECMI series. That was a strength, not a flaw. Ascension was created for the purpose of bringing that dogma of epic gaming to 5th edition.

However, with that doctrine in place, we still must acknowledge that Ascension is built on top of the 5th Edition chassis. It is not a stand alone game. ...The assumptions: PHB, DMG, APG....

GAME MASTER TO THE GODS
???

THE TENETS OF EPIC
The style of epic games suggested by the rules and guidelines in Ascension are largely inspired by the I series "Immortal Rules" and the epic work of Craig Cochran, @Upper_Krust in the old WotC forums and here on EnWorld. In particular, the Ascension approach to Game Mastering is heavily influenced by his article "The Ten Commandments of Epic." Though his article is specifically about the 4th edition of Dungeons and Dragons, the general principles are relevant to all epic games. In his article, Craig provides the ten “Commandments” that he believes are essential for epic games. He describes a series of problems that can hinder epic games and their potential solutions with each "Commandment." With Craig’s work as inspiration, this guide will revisit some of his “Commandments” and explore how to make epic games unique and exciting. Throughout this guide we will be looking at these Tenets of Epic (Craig’s “Commandments” in parenthesis):
Through this book we look to explore the issues proposed by the tenets and and hopefully provide Game Masters the tools needed to solve them and create truly epic games.

The solution to Battles without Budgets will discussed in these chapters.
Chapter 1 - Lords of Reality
Chapter 3 - Exalted Encounters
Chapter 4 - Running Exalted Games

"...The Thing cannot be described—there is no language for such abysms of shrieking and immemorial lunacy, such eldritch contradictions of all matter, force, and cosmic order. A mountain walked or stumbled." - Francis Wayland Thurston, Call of Cthulhu by H. P. Lovecraft,

In ASCENSION, the threats to your divine players start big and only grow larger and larger. The confines of the Gargantuan size does not provide the cinematic experience or mechanical support required to challenge your players with the truly Titanic monsters they should be facing.

The solution to Titanic Threats will be discussed in these chapters:
Chapter 3 - Exalted Encounters
Chapter 6 - The Game Master's Workshop

"I've seen things you people wouldn't believe. Attack ships on fire off the shoulder of Orion. I watch c-beams glitter in the dark near the Tannhauser Gate. All those moments will be lost in time, like tears in the rain." - Roy Batty (Rutger Hauer), Blade Runner

HAMMER OF THE GODS

"Without imitating anyone else, you should have as much weaponry as suits you.” - Miyamoto Musashi, The Book of Five Rings

The Solution to the Hammer of the Gods will be discussed in these chapters:
Chapter 5 - Exalted Rewards
Chapter 6 - The Game Master's Workshop

"I am become death, the destroyer of worlds." - J. Robert Oppenheimer

The solution to the One God Army will discussed in these chapters:
Chapter 3 - Exalted Encounters
Chapter 4 - Running Exalted Games

"The atomic bomb made the prospect of future war unendurable. It has led us up those last few steps to the mountain pass; and beyond there is a different country." - J. Robert Oppenheimer

When characters transcend the mortal coil to join the ranks of the exalted, they should not expect to constantly seek out new monsters to defeat and loot. They are part of relatively few entities in all of existence that can truly change the cosmos. With such power comes enormous responsibility and ....

Chapter 2: The Multiverse (WIP)
THE PLANES

THE AETHER​
TRAVELING TO OTHER REALITIES​
Last edited: Feb 20, 2021

I'll be update all 3 threads quite a bit over this month. But it is all WIP. I plan to take comments and update for the next year or so.

I understand how some projects can just start to weigh you down. Best of luck with this web supplement version amigo!

Upper_Krust said:
I understand how some projects can just start to weigh you down. Best of luck with this web supplement version amigo!
Click to expand...

Thank you for the kind words. Your epic work has always been an inspiration.

I got to anxious about producing something I deemed worthy of people paying money for and I kept second-guessing and revising. Moving it to a free, open web-based format allows me to experiment without the guilt and makes it easy to update and revise.

I hope to be much more productive this way.

the most important thing is to enjoy what you are doing. Working in 3E (at epic level) really started becoming a mathematical grind for me that was eclipsing the fun I had doing the design. Similarly having to do so many Portfolio's in Ascension felt more like a chore and the work suffered as a result. At the moment I am having fun doing this latest 5E book and I hope that will show when people get to see it.

Very true and good luck on your new book!

Looks very cool! However, have you spoken with a lawyer about potential infringement with the Exalted RPG? I don't know if there are enough similarities, but I wouldn't want to be blindsided either.

Seramus said:
Looks very cool! However, have you spoken with a lawyer about potential infringement with the Exalted RPG? I don't know if there are enough similarities, but I wouldn't want to be blindsided either.
Click to expand...

There is no issue with the name, are you talking about the content? It is a long time since I looked at Exalted, but from my memory it is quite different.

Supporter
Just dropping an anchor here so I can keep track of this. I look forward to seeing your work.

JasonZZ said:
Just dropping an anchor here so I can keep track of this. I look forward to seeing your work.
Click to expand...

Just an FYI, the other 2 threads in the Ascension series are going to see more action at firs than this DM centric one. This is the one I have the least amount of content in any state of preparation.

dave2008 said:
Just an FYI, the other 2 threads in the Ascension series are going to see more action at firs than this DM centric one. This is the one I have the least amount of content in any state of preparation.
Click to expand...

Thank you for the heads-up. I'll go have a look at the others as well.