Ryujin said:
I felt that Lynch missed the basic gut feel of the book horribly. The shortcut of making Baron Harkonnen physically objectionable to make the audience immediately dislike him was crass. "Weirding modules"? Seriously? The mini series hit the mark far better but this is still a property that's begging for a remake, and that's something I almost never say.
Click to expand...

The Lynch film is a total mess, no doubt about it. The Ultimate Superbo Amazeballs No Really We Mean It This Time (Whatever) cut is a bit better, but it's still near incomprehensible, especially if you don't have the book near memorized.

But I think Lynch did the worms better, the ornithopters better, and the general air of antiquated nobility vs. noble savagery better. I also like the overall visual style better (especially the various guild navigators and the personal shields).

The miniseries (both of them of which I am aware) felt way too sterile and distant to me. And as I mentioned upstream, the guy playing Paul just totally didn't work for me at all.

I'd love to see a well-done remake we sell. But I don't think it can happen. Modern CGI will just make it look like a dated cartoon before it finishes it's theatrical run, and that's assuming anybody could get a big enough budget to even make a good try at it (after 3 failed attempts to make the move in the last 30 or so years).

Ralif Redhammer said:
For being band that had never done a soundtrack before (or since), Toto's Dune soundtrack is pretty awesome.
Click to expand...

I can hear the guitars just looking at this... 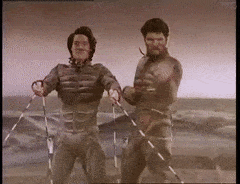 I'll have a couple, some already names, some not.

Space Raiders - Awesome film about a kid who gets to go on a space adventure. love it even more than another one that I love that uses the same soundtrack and special effects which is...

Battle Beyond the Stars - Star Wars copy but shamelessly stays truer to the source of the Seven Samurai/Magnificent Seven.

Star Crash - This is cheesy, very cheesy. Absolutely a Star Wars Riff. David Hasselhoff in a LOT of makeup...and a bunch of other crazy stuff.

The A-Team - total and complete chaos all wrapped up in a neat order.

Tron Legacy - This movie ROCKED. I'm not even a very big Tron fan but LOVED this movie. It needed a sequel.

Willow - Not sure if this was considered doing bad at the box office or not, but add this to the 80s Fantasy films that I love.

Others already mentioned - Master of the Universe, Labyrinth, Big Trouble in Little China, Conan the Destroyer and Red Sonya, Dune, Beastmaster, Krull. (and with all those RH characters, can't forget Kull the Conqueror either!!!).

I don't consider them bad movies at all, and truly really actually enjoy watching them.

I can't deny that I'm prone to fits of nostalgia and reminiscing. I try not to get too mired in the past, but it happens sometimes.


lowkey13 said:
You're drowning in the past, Ralif!

But I've got your life vest right here: it's called the 80's, and it's gonna be around forever!
Click to expand...

True story: wee little Ralif sat down to watch Dune with my family. All was going well until the heart plug scene. I ran back to my room and read a book on dinosaurs to calm down.

trappedslider must be stopped. No matter the cost.

GreyLord said:
Tron Legacy - This movie ROCKED. I'm not even a very big Tron fan but LOVED this movie. It needed a sequel.
Click to expand...

I really liked Tron Legacy and was interested to see where it was going. However it's big weakness was a mediocre Garrett Hedlund. It should have been his breakout role like Chris Pine's Kirk, but it was just ok. It's tough to build a franchise around an OK lead.


Ralif Redhammer said:
True story: wee little Ralif sat down to watch Dune with my family. All was going well until the heart plug scene. I ran back to my room and read a book on dinosaurs to calm down.
Click to expand...

This is the best coping mechanism I have ever heard of. I may try this after work today.

I love the costume designs and general aestetic of the Dune movie. It looks fantastic, and I also love the score. It's a pity that the movie tries and fails to cram a really big story in just one movie. It's just too big for that. As a bare minimum it would need a multi-movie trilogy, like The Lord of the Rings did.

A few years ago I picked up a Special Edition of the movie on DVD, which adds an introduction that explains a lot more of the plot... which is cool... and it also removed the heartplug scene, goddamit!

I liked the Director's Cut of both Dawn of Justice and Daredevil.

Imaculata said:
As a bare minimum it would need a multi-movie trilogy, like The Lord of the Rings did.
Click to expand...

Do you think the upcoming 2 Dune movies by Denis Villeneuve won't have enough time to do it properly then?

Imaculata said:
I love the costume designs and general aestetic of the Dune movie. It looks fantastic, and I also love the score.
Click to expand...

100% this. Dune as a novel is a masterpiece of a novel, but is almost impossible to portray visually. Too many philosophical bits. Lynch's Dune is a masterpiece of cinema, even if it makes a mess of the novel. See also: The Shining, The Mist (and a lot of other Stephen King stuff), Blade Runner, Willy Wonka and the Chocolate Factory.

Also, I can watch this over and over again (PG language):

BookBarbarian said:
trappedslider must be stopped. No matter the cost.

Have you seen the Captain America with Mjolnir scene set to that song? Awesomeness

Ryujin said:
Have you seen the Captain America with Mjolnir scene set to that song? Awesomeness
Click to expand...

BookBarbarian said:
Do you think the upcoming 2 Dune movies by Denis Villeneuve won't have enough time to do it properly then?
Click to expand...

I honestly don't know. Atleast they are doing more than one movie, but that still probably means they'll have to leave a lot of stuff out. And as @Deset Gled rightfully pointed out, there's a lot of stuff in the books that doesn't lend itself to film.

National Treasure - Silly but fun, played with an earnestness by Nicholas Cage in the sort of role he was born to play. (Mentioned by someone else.)

Man on Fire - Denzel Washington elevates pretty much anything he appears in.

Payback - Mel Gibson plays a bad guy revenging himself on other bad guys.

Hook - Cheesy but lovable film filled with childish wonder. Hated by adults that have forgotten their happy thoughts.

Tron Legacy - I'll second this as better than its reviews might suggest.

Some people have mentioned 'Dark Crystal' and 'Labyrinth', but both of those movies have Rotten Tomatoes critic and audience scores above 70%, which I would feel is objectively well above 'bad movie' territory. If we are going to accept "performed poorly in its initial box office", we are going to end up talking about 'It's a Wonderful Life', 'Bladerunner', 'Willy Wonka and the Chocolate Factory' (Gene Wilder), 'Hugo' and the 'Shawshank Redemption' as examples of bad movies that we like.

As for Dune, what you have there is a big budget mess of a movie that gets almost everything wrong and yet occasionally has enough of the source material peaking out from under the filthy rags it is asked to wear that it manages some gravitas amidst all the terrible direction and script adaptation decisions. Patrick Stewart and a similarly robust cast certainly helps in that regard. I personally feel that the LotR trilogy is a similar mess, elevated only by much better decisions regarding its production design and artistic direction, and the fact that the long run times allows audiences to forget just how much of the trilogy is genuinely bad. Yes, yes, they get the 'Red Day' speech spot on, but those moments where they stick to Tolkien's dialogue and staging and so get something wonderful are few and far between.

I think that Gene Wilder kills it in Willy Wonka & the Chocolate Factory. His performance in that is off the charts. He is the best part of that movie, in addition to the spectacular sets.

I don't understand how can Labyrinth and Temple of Doom can be considered flops, at least in Europe they were (and still are) very popular. Doom might have been the worst of the 3 old Indy movies, but it's like saying silver is a flop because you have gold and platinum...

Now for REALLY bad movies I actually liked, I have an outing to make: I watched and laughed at almost all Rob Schneider's flicks.

Think it was somewhat popular.

Labyrinth was amazing and is still one of those movies that I'd be happy to sit down and watch again.