Beadle & Grimm's Platinum Edition of The Wild Beyond the Witchlight

A great deal of thought clearly goes into Beadle & Grimm's products, from props to packaging. For their Platinum Edition of The Wild Beyond the Witchlight, that makes opening the shipping box feel like Christmas morning. 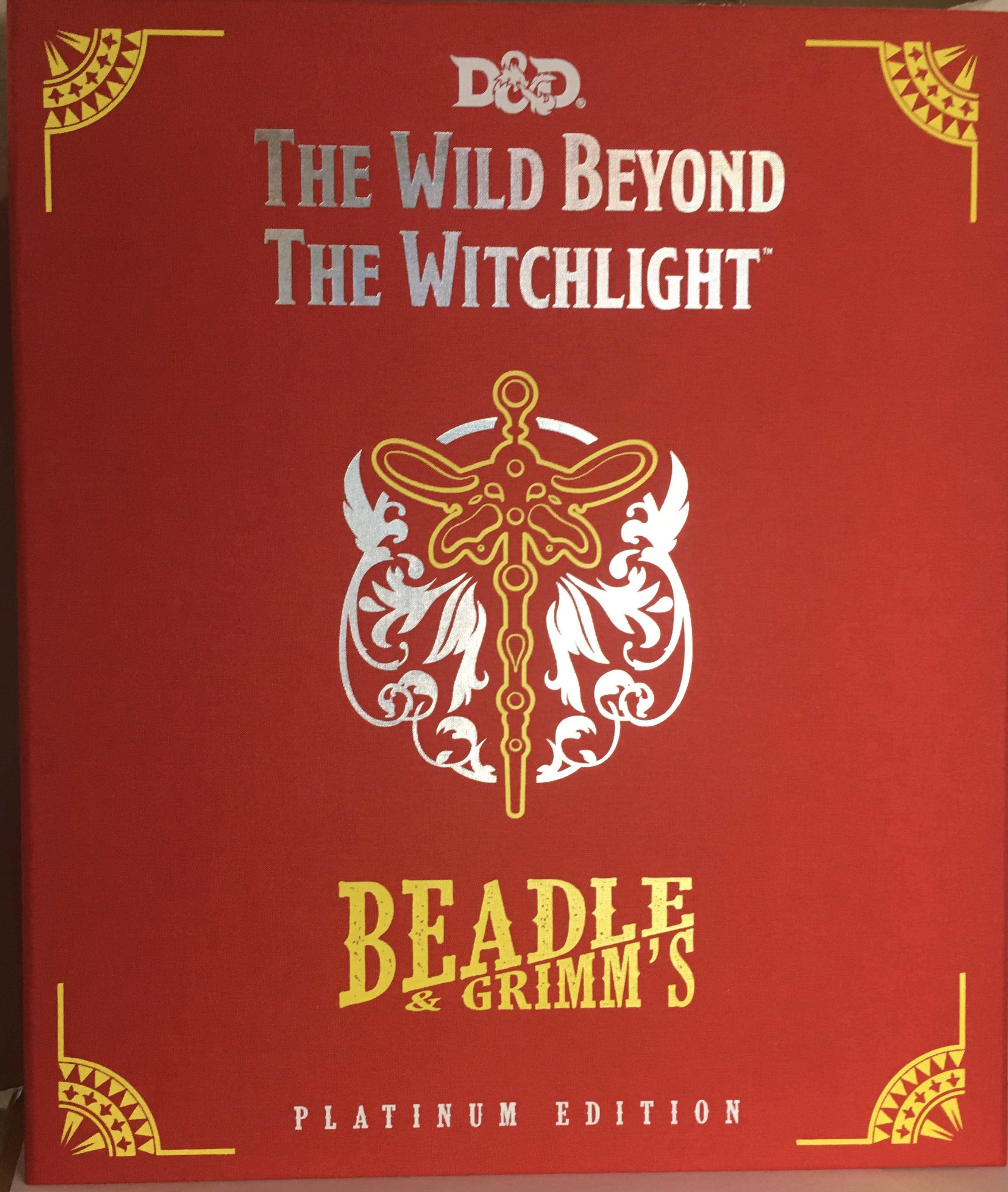 And there's no mistaking a Beadle & Grimm's box. Besides being oversized to ensure plenty of padding inside so nothing moves in transit, the company's logo is on the packaging tape so even without looking at the return label you know for sure you're going to be opening a treat. Inside, cardboard sections off the different components so nothing is crushed and a flat piece of cardboard on the bottom ensures that the box flaps don't cause a seam or rub fragile items, like the fairy wings.

Yes, the Platinum Edition comes with butterfly fairy wings—wearable ones. I told you B&G thinks of everything.

It takes a while to open the whole set because the B&GPEotWBtW is so packed with material. The main box has a linen texture with a magnetic flap to keep it shut. Inside, custom-cut foam holds everything in place, including a life-sized unicorn horn. 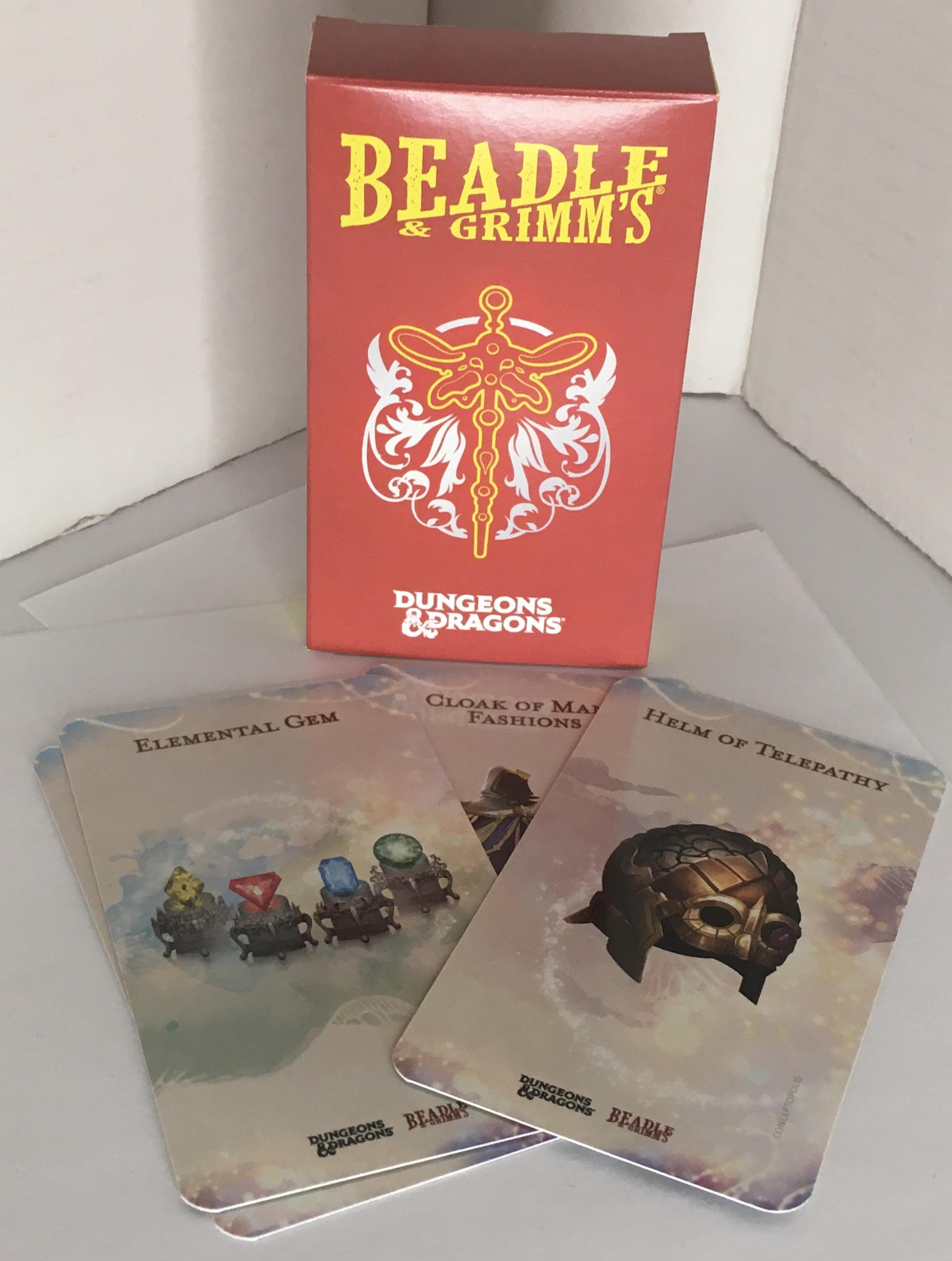 As with other B&G sets, the box contains the entire The Wild Beyond the Witchlight adventure broken into lay-flat sections, a custom DM screen, NPC art cards, and 61 folded monster cards (“Encounter Cards”) that show the art on one side and monster stats on the other side when draped over a DM screen. There's also a lot of art, both from the book and original pieces to supplement it for the NPC art cards and the deck of 52 magic item cards. 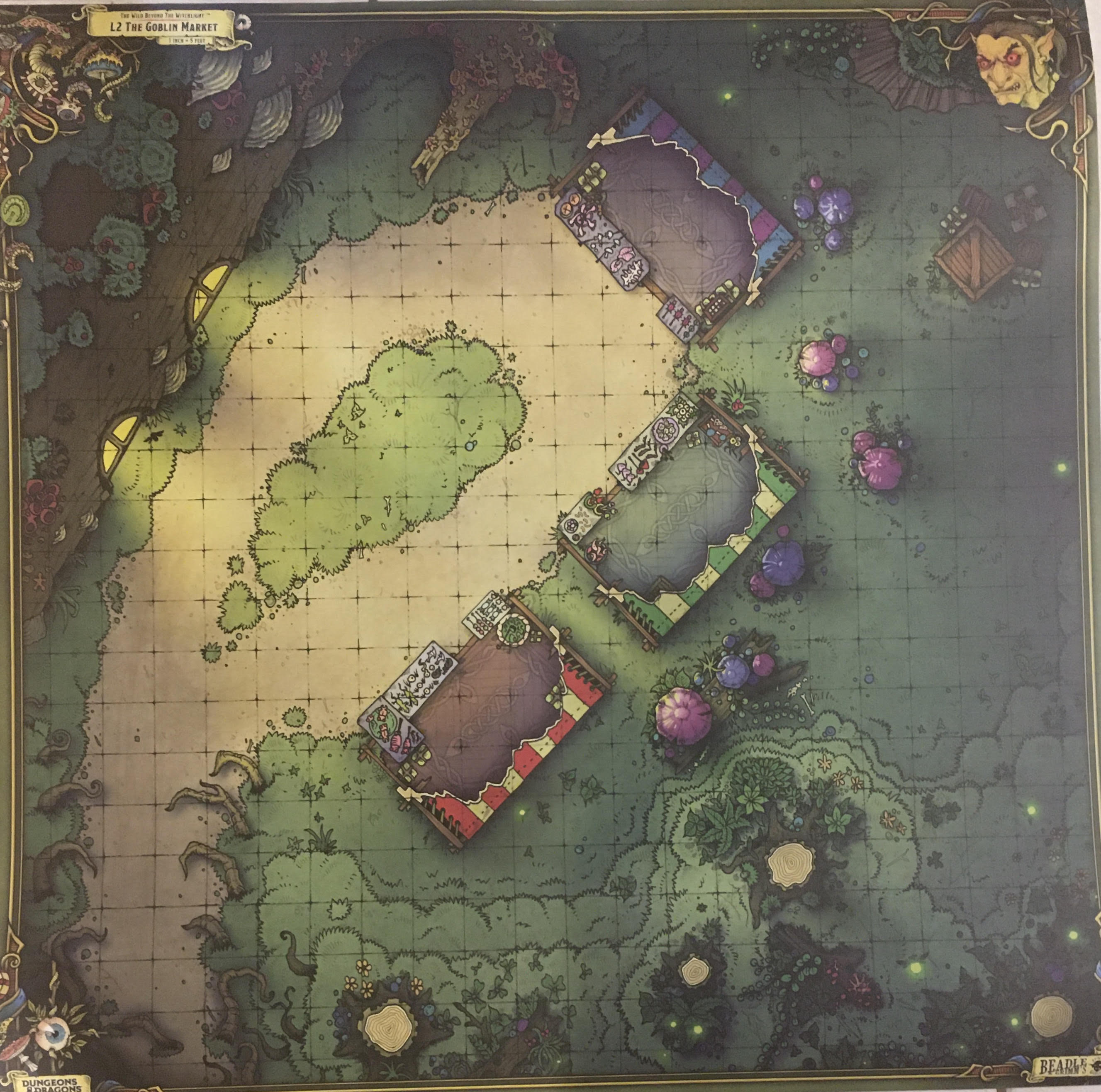 In addition to nine maps from the original book printed on glossy, full-color card stock, the set also has five full-color maps, packaged in its own map tube—and it's not a generic map tube. This one has a custom red-and-yellow design with the Wild Beyond the Witchlight logo and a zigzag design that reminds me of carnival bunting. Four are double sided battle maps printed on heavy paper. The fifth, the map of Prismeer, is full color printed on canvas paper to be even sturdier. It could easily be hung as a wall decoration.

Part of the original content in the set is Beadle & Grimm's Presents Fairy Tales from the Warehouse. It contains three one-shot adventures taking place in Hither, Thither and Yon that can be used to supplement the full TWBtW campaign. Leviathan of Lilac Lane is a fishing adventure. Glitter Hill is a pixie adventure. Ruvar's Windmill is a puzzle adventure. All three are solid and fun extensions for the main campaign.

Want to start playing immediately? B&GPEotWBtW comes with five pre-generated characters that can be used as PCs or as supplemental NPCs. The options are a Harengone Ranger, Fairy Sorcerer, Human Bard, Gnome Wizard, and Wood Elf Druid. They've all been optimized for the non-combat play option for TWBtW. 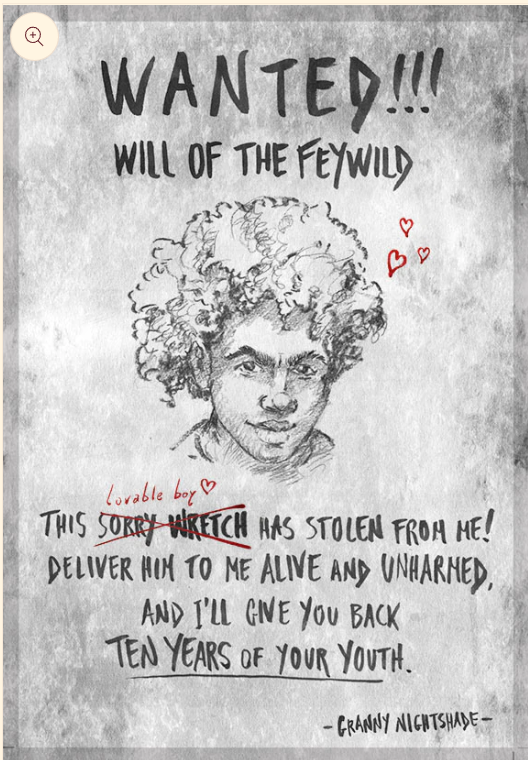 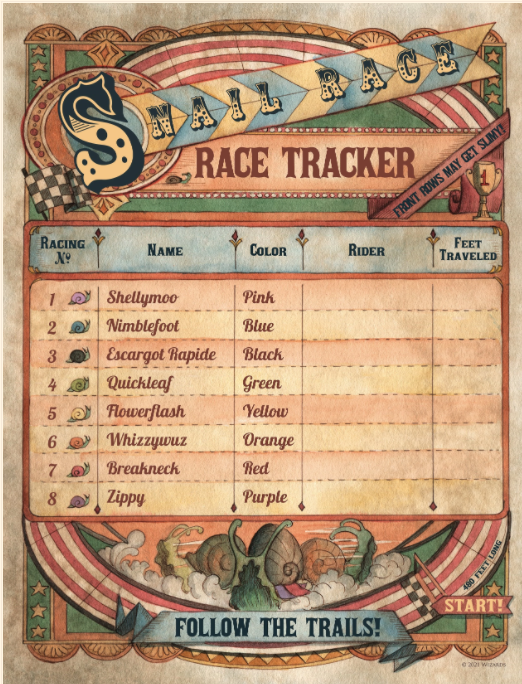 As with every B&G set, there is a lot of clever paperwork to enhance the party's immersion. Here that includes wanted posters for Will o' the Fey, a poster for the Witchlight carnival, various letters and notes, tickets the carnival and more. To make life easier for the GM there are a laminated story tracker and snail race tracker. 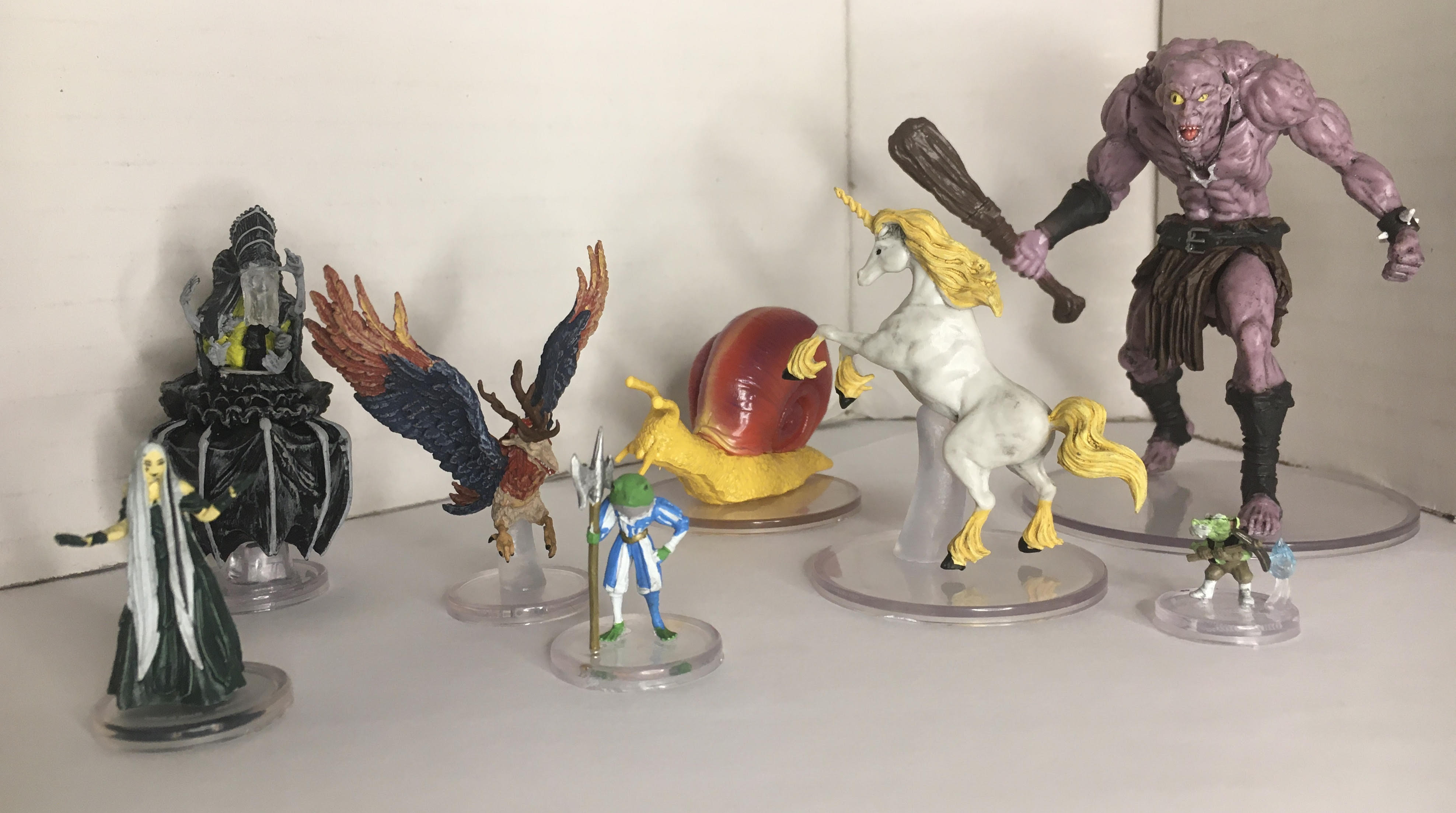 The Platinum Edition comes with a TWBtW Icons of the Realms miniature set. These 20, fully painted miniatures are produced by WizKids, and attention has been paid to the details. The figures range in size from the tiny bullywug royal to the large jabberwock, and really give you a sense of scale for the types of creatures in the Feywild.

Remember the NPC dialogue prompts from the back of TWBtW? Here they're translated to slips of glossy paper and placed in a blue velvet drawstring bag decorated with a silver sun and moon symbol. That's just the start of the well-crafted and thought-out extras. 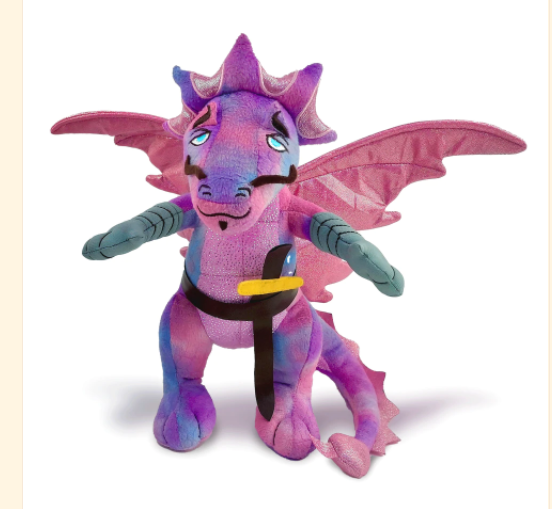 In addition to the aforementioned resin unicorn horn, there’s a wearable Valor's Call Badge and a gold-colored Completion Coin, but my favorite is the plushie. Sir Talavar, the noble fairy dragon knight, is transformed into an adorable stuffed animal whose design is just as well thought out as everything else. His Salvador Dali mustache isn't just drawn or sewn flat onto his snout. Instead they're thin, curled pieces of fabric you can fluff out to create the right look. Around his waist is a pleather belt with a pleather sword tucked into it. His sparkly pink wings contain a wire inside so they can be arched and flare out properly for a dragon.

In short, the Beadle & Grimm's Platinum Edition of The Wild Beyond the Witchlight is fantastic and well-made with whimsical touches that reflect its Feywild setting. Looking at everything it contains, I can understand the $499 price even though that's a big commitment today. Beadle & Grimm's also has a Silver Edition of The Wild Beyond the Witchlight for $175. It comes with some of the same items like the maps, extra adventures, encounter cards, dialogue prompts and bag, etc. but no plush dragon, unicorn horn, WizKid miniatures or butterfly fairy wings, to name a few.

If you have the budget for one of them, both the Silver and Platinum Editions of The Wild Beyond the Witchlight have a lot to offer in terms of DM convenience, tools for immersion, and things that are just useful like the battle maps and encounter cards that fit easily on the DM Screen. While not for everyone, the quality of Beadle & Grimm's products lives up to its reputation as a publisher of luxury RPG products.
Last edited by a moderator: Mar 14, 2022
Click to expand...

I'm getting ready to start this adventure with my family and have this set. It is really amazing! It is expensive, but with everything that it comes with (including a code for the book on D&D Beyond with the Platinum set), it really is worth it. Every single item is high quality construction. The paper stock of the maps are the highest quality and most durable I have ever used in all my decades of gaming. I know I sound like a commercial, but I really enjoy Beadle & Grimm's products. You really get a lot and all of it high quality with these.

Even the Silver Editions are excellent (and come with multiple maps and handouts), even more so if you don't already own that particular book. But, of course, the big question is whether it's worth it for you and your game, which will vary for everyone.