During WotC's 'D&D Live' events in mid-July this year, there will be a live game called The Lost Odyssey: Last Light, featuring a dragons, krakens, and giant sea queens. WotC's Kate Welch will be the DM and celebrity guests Jack Black, Reggie Watts, Lauren Lapkus, Kevin Smith, and Jason Mewes will be the players -- plus one other guest they have not yet announced. 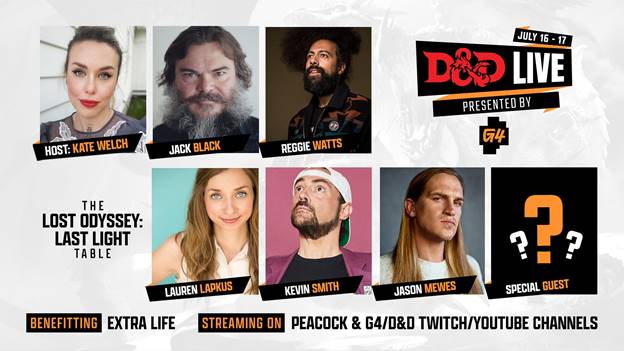 Urriak Uruk said:
When you are doing these live with so many people on stream at once, there is going to be quality problems.
Click to expand...

Disgruntled Hobbit said:
Yet most other streamed games do it just fine
The big DnD Live special games shouldn't be of lower quality than the weekly Knights of Evenstar games
Click to expand...


I can tell you after watching both E3 and Netflix's Geeked Week streaming events, that no, live events do not have much better quality. Most individuals, even professional actors performers, do not have great setups for live recording.