Eoghan watched the tart and the mallet fall flat and shook his head wistfully. After this he'd have to have a discussion with Tenibor about the arcane nature of slapstick.

Quinn watches the bugbear charge Tenibor and take a swing at the wizard. The druid lashes out at the creature with his thorn whip which wraps around the bugbears neck. As the vine strangles the life from the bugbear Quinn moves into the room to threaten the remaining creatures.

Valda shot a bugbear dead and worked her way down the sloping ceiling to the wall near Eoghan. Quinn sent out a thorny whip that ended the life of the bugbear that had attacked Tenibor, and then he moved into the room next to a pillar. The guard that had originally spoken to Eoghan rushed him, and bashed him with a morningstar.

One of the few remaining Bugbears threw a javelin up at Valda, but it struck the ceiling and clattered to the floor near Eoghan. 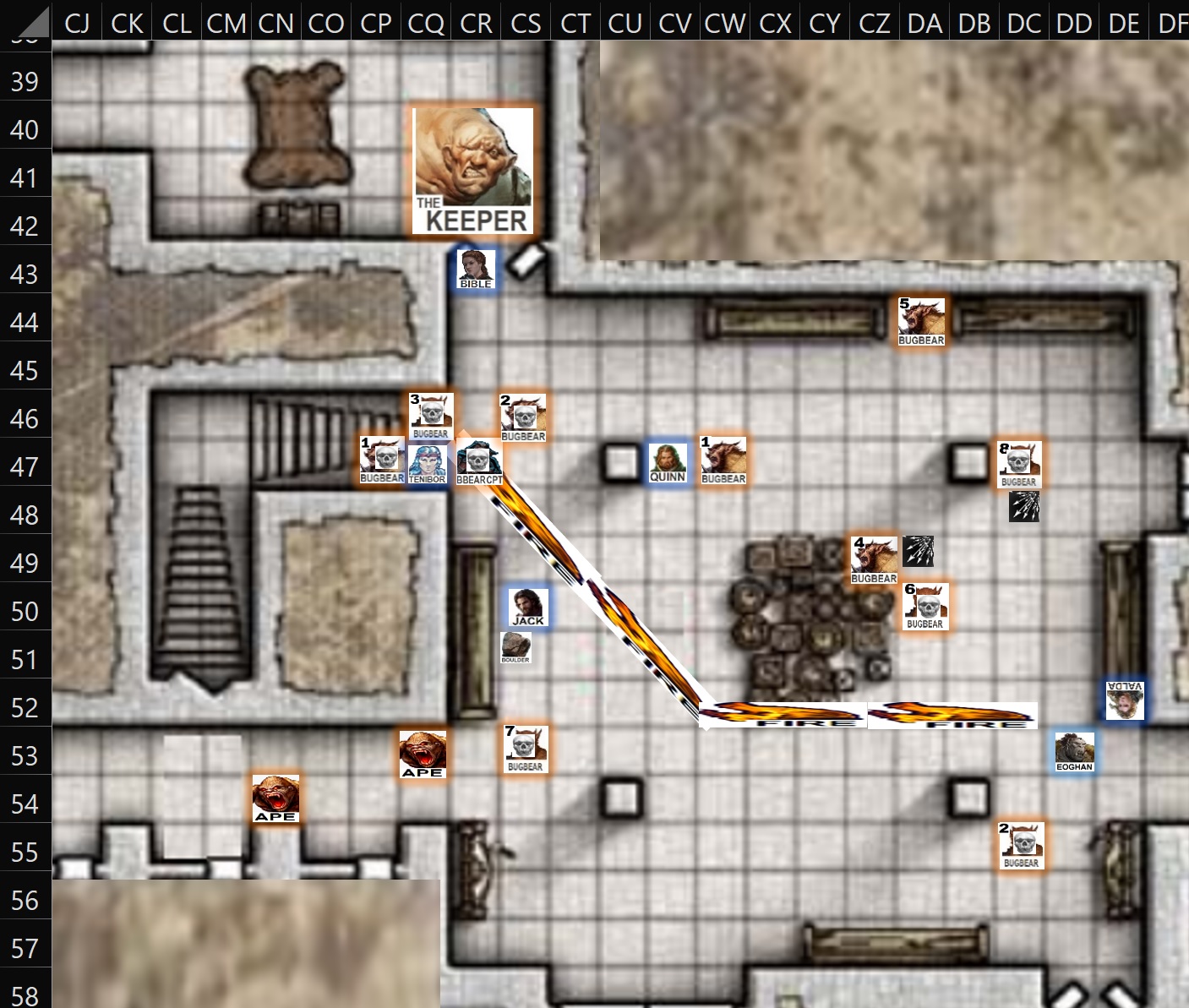 Eoghan gestured like a mad conductor, arrows went flying by. The majority of them sped toward the target that survived them moments ago, but three peeled off to deal with a badly hurt bugbear.

Eoghan hurried through that gap and then curved a bit toward where he heard the giant tongue.

::With a face like that, who need enemas?:: he mocked The Keeper.

Hearing the sound of apes approaching, Jack turned to face the wall of flames yet again.

"Out of the frying pan and into the..." he said before covering his face with his arm yet again to vault, and then tumble past the intense heat. Once through, he sprang to his feet and quickly aimed Darling above Bible's head and into the face of misshapen giant.

"WOAH!" exclaims Bible, reeling from the blow dealt by the giant's axe. Realizing she'll need to take her opponent down quickly, she puts it in high gear, stabbing furiously at the Keeper.

May this bring actual death...

Switching back from comedy, Tenibor leans on the mallet and sings his mournful dirge.

Quinn watched as the bugbear guard rushed him. He began to raise his shield but the creature was to quick. The morningstar crunched into him and he gritted his teeth in pain. He directed the thorny whip to strike at the bugbear which wraps around the creatures arm.

Eoghan's animated arrows positively pincushioned the bugbear taking cover behind the pile of crates. A smaller group of them flew northward and brought down another bugbear there. The Firbolg marched through the gap at the far end of the fire-wall and mocked the ugly giant, who had heard it all before.

Not far from Eoghan, Quinn was involved in a vicious fight with the original guard. The bugbear bashed him, and Quinn wrapped a vine around his arm and pulled. The vine contracted, and the bugbear was pulled off balance, staggering into the outer edge of the fire-wall, who's flame caught the oils in the bugbear's fur. The fur lit up, and the big goblinoid screamed and fell to the ground in a smelly, flaming heap.

Valda finally gets down the wall to the ground near Eoghan. She drops her bow, and draws her longsword and gets her shield off her back, readying herself as she keeps an eye on the apes moving out the corridor across the room from her.

The misshapen giant leaned through the door, trying to get at Bible with his axe, but instead he got one of Jack's quarrels in the face. As he stepped back, Bible hacked at his legs, causing him to stumble. Tenibor's low dirge-note foretold his demise, as Bible finished him with a deep cut to the abdomen, and he fell back into his room.

The apes burst into the room from a south-west hallway. They had been sent there to go after Jack, but he had gone back through the wall of fire. They looked around, reluctant to go near the flames, and all they saw was Valda, who had walked down the wall to the ground and was donning her shield, having put away her bow. With a vicious shriek, they bounded toward her baring their teeth. 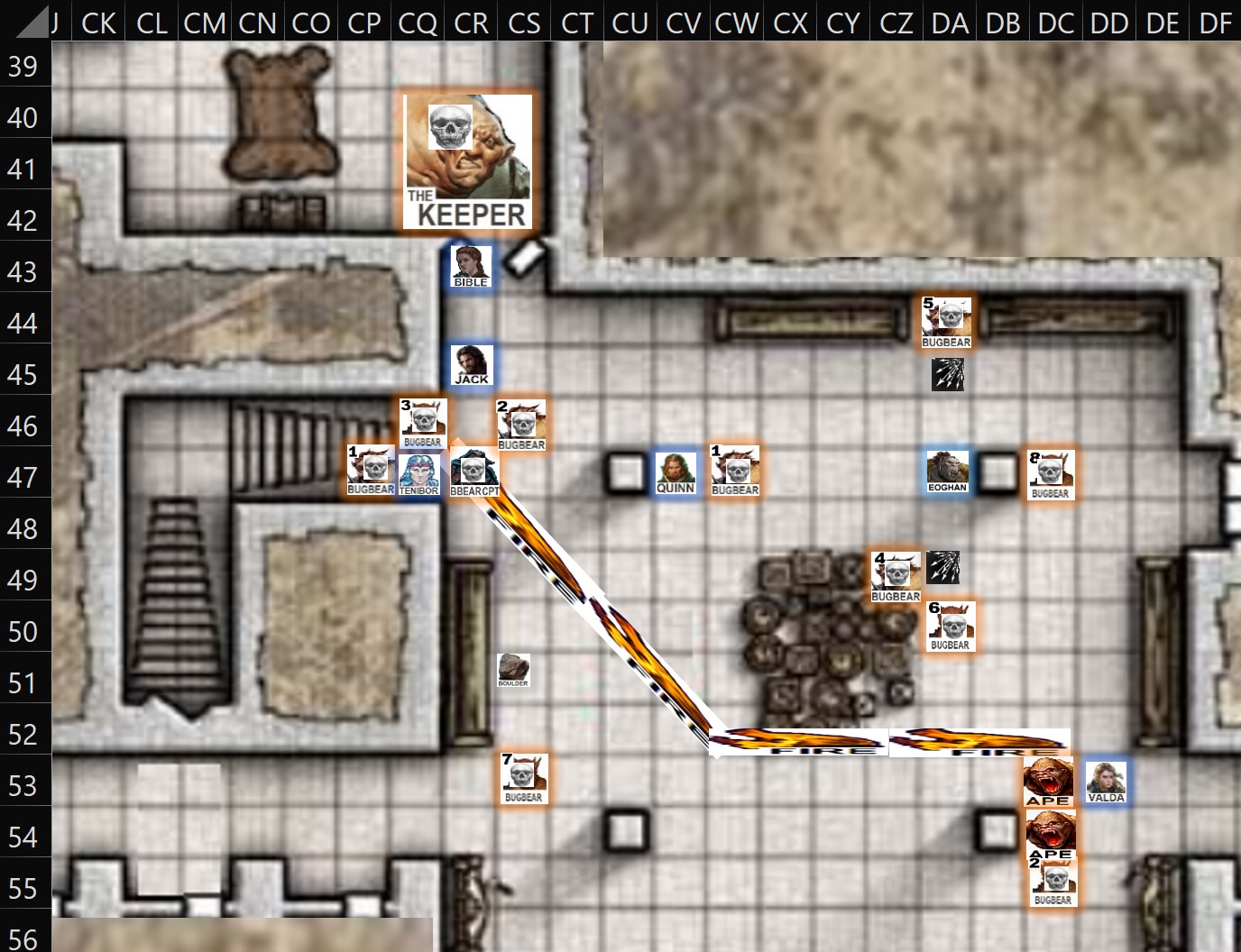 Eoghan hums and conducts, and the streaking arrows shot around the firey wall toward the apes, at the last moment splitting up and half impaling each.

He looked as if he was about to insult them, but not seeing a target he instead just moves towards the double doors to his east, rapier out and ready to stab if something more comes through.

::I think we have all of them down here, let's free the prisoners.::

Eoghan's arrows flew across the room and lethally impaled one of the two apes and injured the second.