Gimlak follows the group, impressed by the spell that makes him quieter than he is used to.

As they discuss near the wall, he says "We should scout the perimeter and get a sense of the number of giants inside. We should pick them of one by one if we can. If need be, I can try to create a tunnel to access inside under the wall."

The company crossed the open field between the rocky tor and the steading's palisade without incident. They hugged the twenty-foot palisade wall - on their right was the eastern gate and north of that the outbuilding. On their left was the long eastern wall of the steading, with two stone chimneys twenty-five feet high. Around the corner, on the left, out of sight now but in view earlier, was the main gate. Behind it was the watchtower. Around the corner toward the right (northward) the outbuilding had two chimneys, one of which (the closer) was not smoking.

Supporter
The Colonel, silent so far, assesses the building.

"Here's another possibility, that can perhaps work alongside what you've suggested. I can get onto the roof, or into the guardhouse, with perhaps one other. From there I can let down a rope for the rest. From there we can have an aerial access to the courtyard, or to the main hall through the thatched roof. 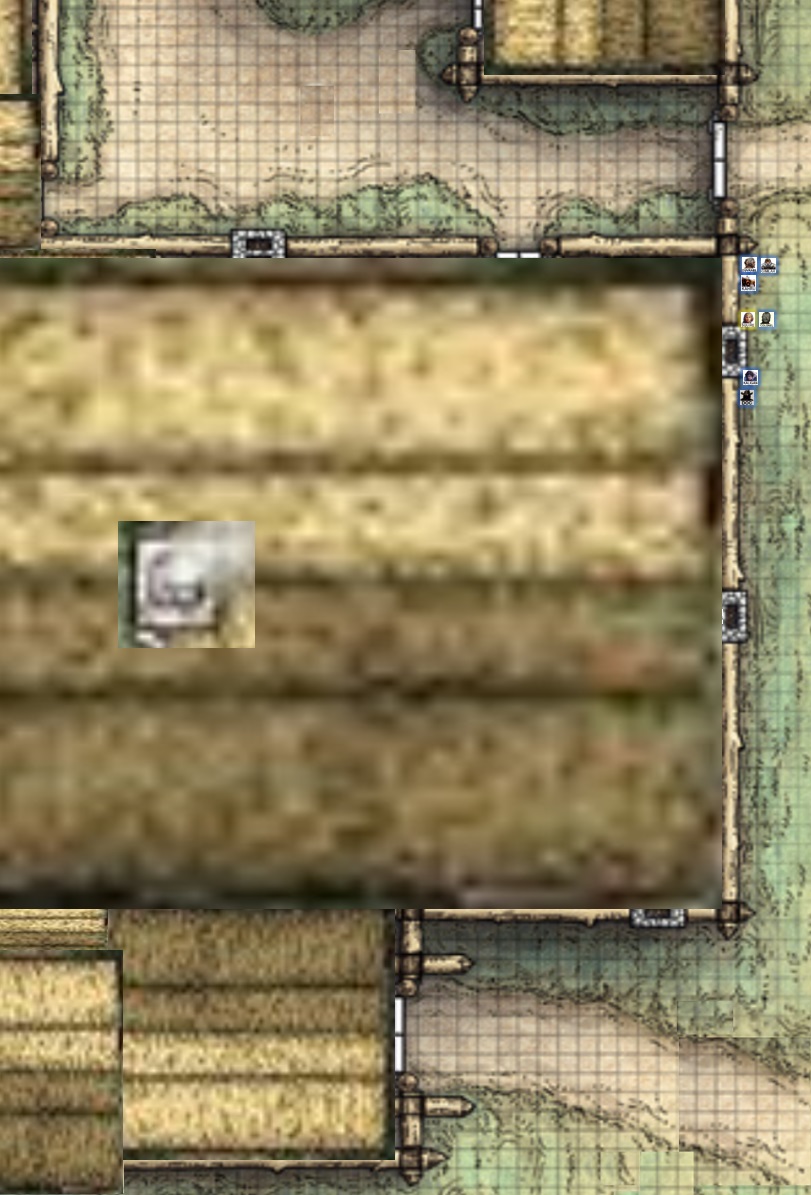 Notes: The outbuilding is Top Right. The Watchtower is Bottom Left (both are partially off the map); Bottom middle is the main gate; PCs are on the right-hand side, around a chimney just below the eastern gate. Doc intends to move clockwise to the watchtower, but Duvrael has also suggested letting snake under a gate. Lots of ideas.[/ooc]


Hisss the snake familiar slithers underneath the first gate and its master closes his eyes in order to perceive through the serpent’s senses.

Durable stood by the eastern gate and his eyes went snake-like as he looked through the eyes of his familiar, who went under the heavy wooden door. There was a wide, L-shaped courtyard (with, thankfully, plenty of grass for the snake to hide in, up against the sides of either building. The center was worn to bare dirt, and filthy with animal waste. And there were the animals: Across the courtyard, at the bend, were four horse-sized wolves. They were fighting over bones in an enormous scrap-pile. Two were young and backed off quickly, while the other two snarled and snapped at each other. Noise and smell (as the snake flicked its tongue) from a big door beyond them suggested that through it was a bustling kitchen.

”A courtyard before the kitchen. No giants in sight.”

The wizard waits before his familiar has returned before getting back to his own eyes and ears.

”The wolves are distracted but will notice us immediately. Magical invisibility will not fool their noses.”

With an expectant look Duvrael looks at Kahru. From what he gathers, the northlander has some druidic magic and may be able to deal with the giant wolves.

Silent as a corpse, Doc was the first to move and Kahru like the others followed behind. The idea of burning the whole place to the ground and slaying the inhabitants as they came out had some appeal to the Barbarian, though that might reduce his chance of recovering the stolen whistle.

Though he was wise enough to remain silent and patient enough to bide his time observing, the Barbarian was not one for clever schemes, a stealthy entry and strong attack was his style. So as the others put their ideas down he spent his time scanning the building assessing its constructing - sturdiness, flaws, points of entry or exit besides the gates and places that might be climbed.

He saw Hisss the snake familiar slither beneath the gate and grinned as he considered the possibility of himself doing the same - a new form!

When Duvrael returns with the report of four wolves Kahru considers the possibilities. “I will need to be able to see them, and they must see me” he explains “even then four may be too many to calm -”

It was the Colonel that suggested climbing to the roof as an option, and that idea appealed to Kahru, especially as he had the option of flying up and then spying out the full lay of the steading and the numbers inside. He might also better observe the wolves and come up with a clearer strategy…

After hearing about the wolves from Duvrael, the Colonel's idea and the other possibilities that he has gone over in his own mind, Kaligan says, "I think the best option is to go up onto the roof and try to find a way inside from above." Kaligan then grows silent as his thoughts go over scenarios. Those looking at him can see his eyes moving as he plays those scenarios out in his head. "Nightfall. The giants grow full on their stolen goods, and drunk on stolen wine. Tonight they will sleep deeply and the chimney to the kitchen will grow cold. We can enter that way and most will be deep on slumber. That is when we should strike."

Doc listens to the others impassively, weighing the options. After hearing Kaligan speak, he nods slightly toward him.

Figure comin' in from the top works.

Kaligan says, "I can attain the roof easily if that is what we decide. If someone has a rope, I will lower it down."

Supporter
The colonel approves of the plan. If Kaligan can access the roof easily, the Colonel lets him do so. He's happy to be directed as needed.

Kaligan scans the roof for spots where the group can hide until nightfall.

To avoid the wolves, who were the only viewers with the potential to spot them that they could discern, Kaligan figured that the best route would be up the nearby chimney, along the roof's peak (staying below the north side to avoid the view of the watchtower) and to settle between the main steading's roof and the roof of the kitchen.

Kahru was already climbing, and the big northman hauled himself up onto the thatch in the crook of the chimney. 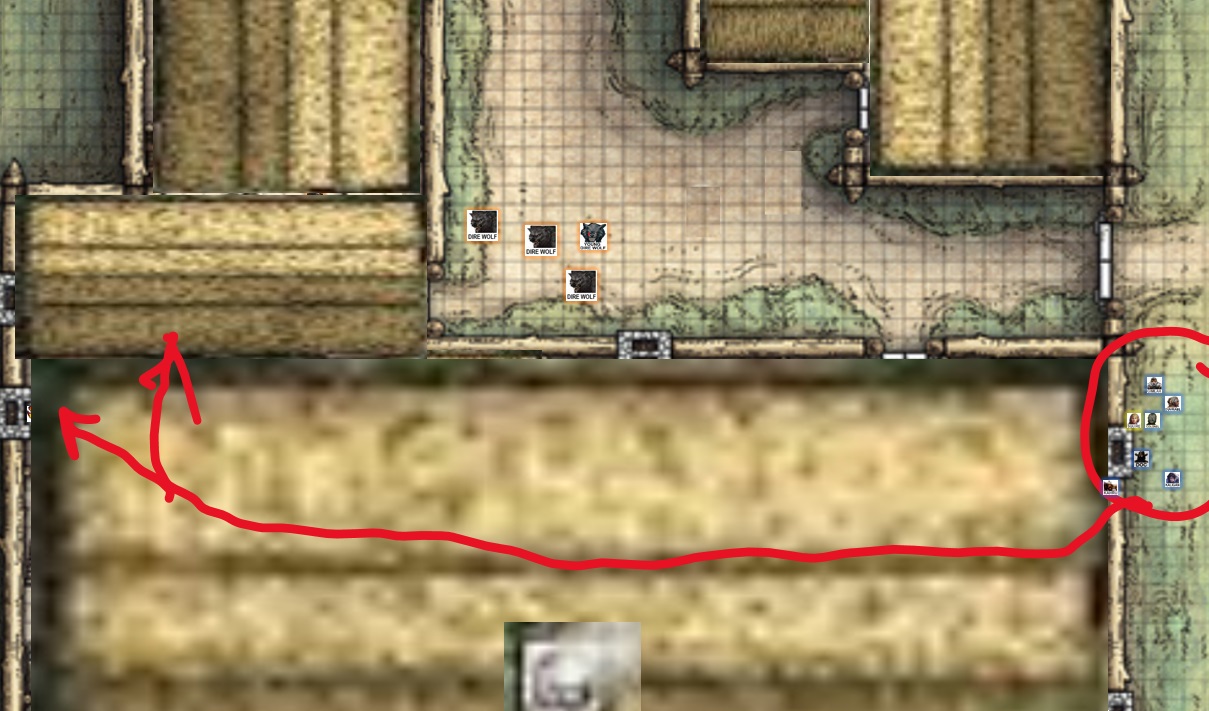 Kaligan doesn't climb well so he prepares himself mentally, reenforcing his body with telekinetic energy and strengthening his legs with the same. If someone hands him a rope, he takes it. He then crouches low and leaps high onto the build, landing lightly on the roof where he waits for Kahru to finish his climb.

Doc saw Kaligan glancing around. He pulled out his rope and handed it to him.

Works as good for climbin' as it does for hangin'.

As Kaligan jumps up onto the roof, Doc lets the souls within him rise up, feeling their pain, their anguish, and ... there. He feels the pain of a life cut short ... the yearning because a young woman loved to swim and was now trapped in the netherrealms. That would do. He let her soul suffuse and invigorate him, the memories and pain flooding through him.

When the rope drops, Doc lithely scrambles up it, with a newfound precision in his movements.

From his new vantage of the roof, Doc could see the dire wolves. These were much bigger wolves than he had ever seen - the size of a horse - but at least, unlike the wolves he was used to on the Mad Mesa, they didn't appear to be vampiric. He could feel the pull of his gun in its holster. These wolves needed killin' - but he let that notion abide. There would be a time for it later. He hunkered down out of their view before they spotted him, though their heads were down, mauling their scraps.