Gimlak smiles as Larry disappears. He telepathically instructs the aberration to silently go down the non-smoking chimney, scout, and describe what he sees, and to head back after about 4 minutes. To make sure, he asks that someone count to make sure the telepathic link doesn't expire As Larry describes what he sees, Gimlak verbalises everything to his companions.

With their hiding spot seeming secure, the group discussed not "wasting" their time with Gimlak's summoned aberration. This came with a quiet discussion of the wizard's magic, and led to Duvrael offering to turn the beholder-kin invisible to scout while they waited.

With that, the hour passed as the invisible Larry would periodically leave and return (surprising everyone with a slightly-too-loud "Gbrabgh!" as he announced his return. During the scouting, the dwarf and the aberration would telepathically argue for a while, as Gimlak tried to get more precise details off the lazy and rude beholder-kin.

Eventually, the group were able to put together some (hopefully accurate) details: 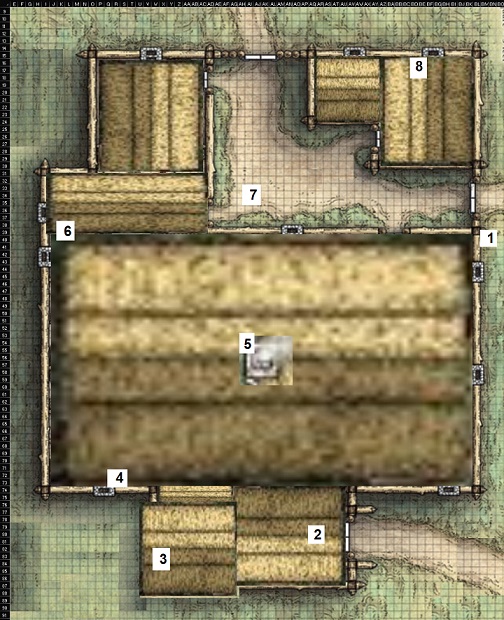 Larry stubbornly refused to give exact numbers, but he reported that there was a large party of giants in the Great Hall (a large room in the middle). The "king" was entertaining guests there, probably not more than a dozen, all giants. (Larry was unclear on the type). He revealed that there were actually more than one (Gimlak narrowed it down to three) giants in the watchtower (Kahru had only seen one) and guards (probably ogres) in the gatehouse.

Larry had gone down the two smoke-free chimneys. The one in the outbuilding, Larry reported "sleeping ogres", while the one at the south-west corner, he reported "one giant" but had no idea what the giant was doing, other than being "awake in the room". By his reluctant description, Gimlak thought that the giant was likely a Stone Giant.

It was fully dark by the time Larry disappeared, but the kitchen fires burned for another hour. A light rain began, washing away the mists that had rolled down out of the hills, but making any chance of a roof fire unlikely. They were cold, damp and cramped from sitting on the wet thatch roof, but the various noises from around the steading had died down and so had the smoke from most of the fires, with one exception: The fire from the chimney that they had initially climbed to get on the roof increased, and the one further south from that one stayed steady.

The bonfire in the great hall still burned, but the smoke from the giant smoke-hole calmed, indicating that it was burning low. Things would likely have changed somewhat, since Larry's reports.
Last edited: May 9, 2022

Reckon we should take care of the guards, first.

There was a noise from below and a hill giant came out from a door not far beneath them. He crossed the courtyard, and the dire wolves barely took notice of him. (they had moved to comfortable grass and were now curled up, fat on scraps and dozing). The giant began to slowly circle the courtyard, on guard duty.

Kaligan says, "We could go down the kitchen chimney. It's far from the tower and it's dark out, so we would not be seen. Once inside, we can explore and engage as we will, without the tower guards being aware."

“ Kitchens mean fire, knives and scrounging guards” the Barbarian opined before looking back to the guard tower.

“Kill the guards then down the smokeless chimney is my plan” Kahru announced his intention. The gunman made him uneasy but Kahru had to agree about taking out the guards and was already moving that direction, pausing at the apex to see if at least one other would back him up …

Duvrael offers no explanation as he softly starts casting another spell. Producing a small piece of cured leather from a pouch on his bandoleer, he touches it to his other hand while intoning a few eldritch phrases and making complicated gestures. A greenish sheen of scales appears on his skin briefly before fading.

"I can make one of the guards attack the others," Avrael offers matter-of-factly as he puts the spell component back, confident in his magical prowess.

The wizard seems a bit distracted, as if making plans and calculations in his head rather than listening to the input of the others.

"However, violence will likely attract more attention than we want. We could draw out most of the giants with a distraction, but they will return faster than we can escape. I've only got one or two invisibility spells left, but that will not fool the wolves. One of us could go down there and tie up a few sleeping giants, slowing them down when they wake up."

He seems to be thinking out loud rather than coming to any conclusion.

Kaligan nods in agreement at Duvrael's words that attacking the guards will likely attract more attention than we want. "We are already past them. Let's go down and deal with what giants are inside."

Gimlak weighs in: "If we do anything outside, we need to dispatch the wolves first otherwise they will reveal our presence. If we go inside, this won't be a problem, unless the guards come in as reinforcements. If we can trap the giants inside, I can open a path to the greater void that will soften them up"

While the others discussed how best to proceed, Kahru went up to the roof's peak and peered over at the watchtower. It was now dark, and he could see the shadowy forms of two hill giants on watch. One was looking out to the south and the other to the east, using the light from two large hooded lanterns cast out into the grassy hills surrounding the steading.

He looked back to see if anyone was following him, and he could just make out the company in the crook of the roof, quietly discussing what to do, with no consensus achieved.

Kahru The Storm Bear looked back with a scowl, wondering why he had been cursed with ditherers instead of warriors. The aid of the spirits had already passed without trace into the night and he could feel the undercurrent of rage starting to broil in his belly. But as impatient and ready to crack skulls as the barbarian was, he was not so rash and unwise as to take on 3 giants alone.

If the rest chose to go down the nearest chimney, then Kahru would follow. But once they were inside - the Barbarian zealot was ready to rip the flesh of ogres

Thinking about the great hall and being at the peak of the roof, Kahru ventured to take a peek down the large smoke hole over the hall. The bonfire had died down to a smallish fire (though the pit was enormous) and he was able to look in without too much smoke in his face. The vaulted ceiling of the hall was supported with blackened rafters, and far below him (forty feet down), the hall was dimly lit by various low-burning iron braziers that hung from the rafters on chains. A few hill giants had put bedrolls down around the firepit, and one was crossing the hall. He could not see the entire room, but the party was over and there appeared to be no sign of the king, who likely had retired to his chambers.

Supporter
The Colonel, huddled under the loose thatch as the scouting takes place, scowls at Donnell. "Know your place, lad. You're right, we don't have a leader. And you're right, it's not me. I've led too many men to their deaths before. Surviving means carrying the burden of those that are lost. If you're lucky, and watch, you will find yourself carrying that burden too before too long."

He lets the others know: "I can get myself, and anyone i can carry, up to the guard house without climbing and silently. If we go that way, I think we can take them by surprise. , since if they are looking anywhere, it won't be from the roof. If we do that, we thin out reinforcements and if we do it quickly we might not alert those inside.

Whether or not we do that, I agree that down the chimney is the way to go. Duvrael's spell seems a great way to go for the main hall, and again would create a distraction that might allow us some opportunity. If our king shows up, I can try to banish him to another plane, and that would give us a minute to deal with the depleted forces. Again, Duvrael's portent might be useful for ensuring that hits home.

Whether we hit the guard tower or not is up to others. I can lead that attack there if you want, carrying anyone who can hold on to my back. Otherwise, let's make our way to the chimney. Donnell, you stick with me."

"If I can cast that spell on one of the more powerful giants, perhaps even the king himself, then perhaps reinforcements will just think it an internal conflict," Duvrael grins coldly.

"With luck, they will not even suspect our presence. If they are sleeping, it could be that many of our opponents are killed without even waking up! The only obstacle is that I cannot focus on both that spell and on magical invisibility, so we will need to hide longer. And does anyone have a way to magically silence the hall?"

Doc has been listening to the others with him. As he hears them talk, he silently takes another slug of whiskey. When you have to shoot, shoot. Don't talk.

Doc moves to the chimney, and begins to clamber down.

ETA- "hides toward the base" = base of chimney at bottom

Kaligan sees Doc head to the chimney and thinks, "Excellent!" He then moves towards the chimney himself and waits for Doc to reach the bottom, then he simply jumps in and lands lightly upon the floor of the chimney next to Doc and begins to look around as he steps out of the chimney to make room for the next person.