While Kahru was growing impatient and contemplating climbing through the smoke-hole to drop into the great hall, Doc decided he was through deliberating. He tied a rope to one of the chimneys that they had figured to belong to the kitchen, on the south side of their hiding place on the roof, hopped up on the stonework, and slid down into darkness.

Pleased that his plan was being implemented at last, Kaligan went next.

To avoid them bunching up at the bottom, Donnell offered to tie a rope to the northern chimney. They weren't sure if there would be a wall between them at the bottom (Larry would not go down these chimneys, as they were blazing hot during his scouting time) but the two chimneys were only twenty feet apart, which wasn't far at giant-size. They could rendezvous inside.

As they had suspected, it was, in fact, the kitchen hearths. As such, there were various built-in contraptions for cooking - iron racks, hooks for hanging iron pots, extra stonework for oven compartments. Doc had stopped to work his way around them, not quite as out of the way as Kaligan had hoped, and there were more things to hook, catch, or burn yourself on (some of the iron was still hot). Kaligan had to catch himself short of landing on his feet, and he pressed against the wall to stop his fall.

This only made a small amount of noise come from the fireplace, but it was enough that Kaligan and Doc waited, listening for a moment, to see if anyone had heard. The kitchen was quiet - the only noise was the sound of someone loudly snoring, but quite far away from the hearth.

When Doc was able to find a safe way through the obstacles without making a ruckus, he looked across an extremely large kitchen, dimly lit by low-burning iron braziers hanging from the rafters. The floor was packed dirt, swept flat, and several sleeping pallets had been laid out along the walls, next to tables, benches, and footstools. Some worktables were giant-sized, but others were man-sized. The sleeping pallets were occupied by orcs. Far across the room, one was snoring loudly. This meant that it was likely that at least one or two of the others were awake, tossing in their pallets. 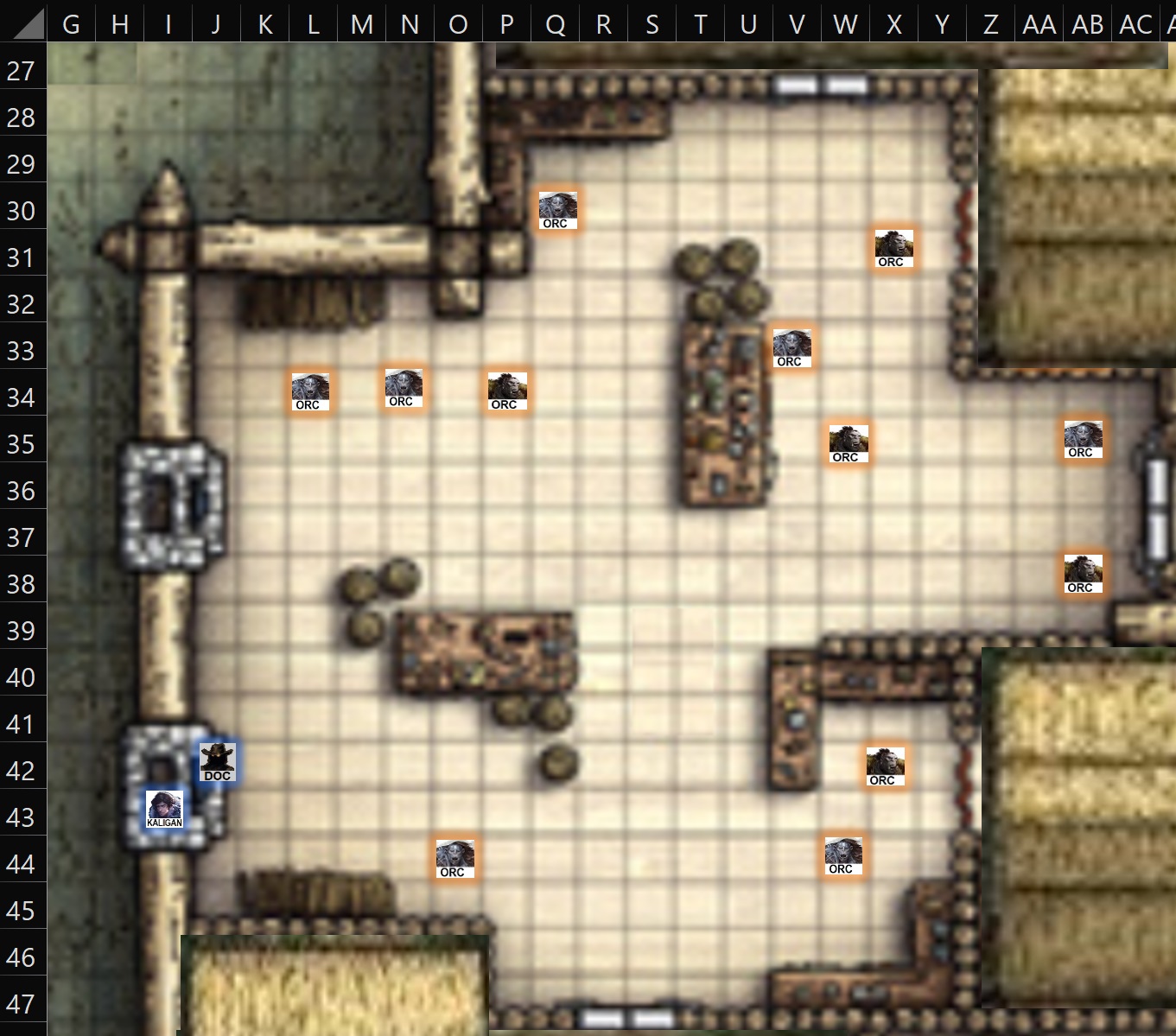 Donnell had finished tying off a second rope, and Kahru came down from the roof peak, eager to get into it with some giants after so much waiting. He shoved his way past Gimlak, who was about to go first down the second chimney (the Colonel was planning to go last, after Donnell, and Duvrael was working his way up onto the first chimney). Grabbing the rope from the dwarf, the big northman swung over the top of the chimney and began to slide.

In doing so, he dislodged a large stone that fell past him as he slid down the rope. Before he landed at the bottom, it had crashed into an iron pot and tumbled out onto the kitchen floor. Orcs sat up in their pallets (even the snoring stopped). They didn't immediately react to it as a threat - but Kahru, figuring that he'd revealed himself anyway, landed at the bottom and began knocking obstacles out of his way, scattering pots and turning out an iron grate.

Gimlak goes down the rope as quietly as he can, and once down stares silently in the room and it turns dark.

Gimlak says : “don’t go into the darkness, let it do its work”

Steve Gorak said:
He’ll cast hunger of hadar psionically at the opposite end of the room, which will spare the group, but cover the orcs. Note that the orcs are now blind, so it should be tough to escape.
Click to expand...

Orcs! the noisy Barbarian had not expected orcs, they were a whole different level of annoyance and one that he thought he’d left behind, there was no fun in slaughtering orcs.

“Stay down, don’t move!” Kahru growled in giantish, loud enough to threaten but not to bellow. He figured that since stealth was blown anyway he may as well intimidate this lot into submission.
Kahru looked around to see if any of the orcs looked like a Boss, of course he didn’t know why the kitchens were filled with orcs but at least one of them should understand giantish ““we’re her for giants not you runts ” he continued ““so stay down you won’t get hurt“

Of course that last statement might be a lie, especially with Gimlaks Abberant shadows, but that just made the threat more real...

Kahru spoke threateningly to the orcs, who stepped away from the man coming out of the fireplace. Then an inky blackness descended on the far side of the kitchen. Strange scraping noises and ominous, unintelligible chanting came from within, which was soon followed by the panicked cries of the orcs who were lost inside. 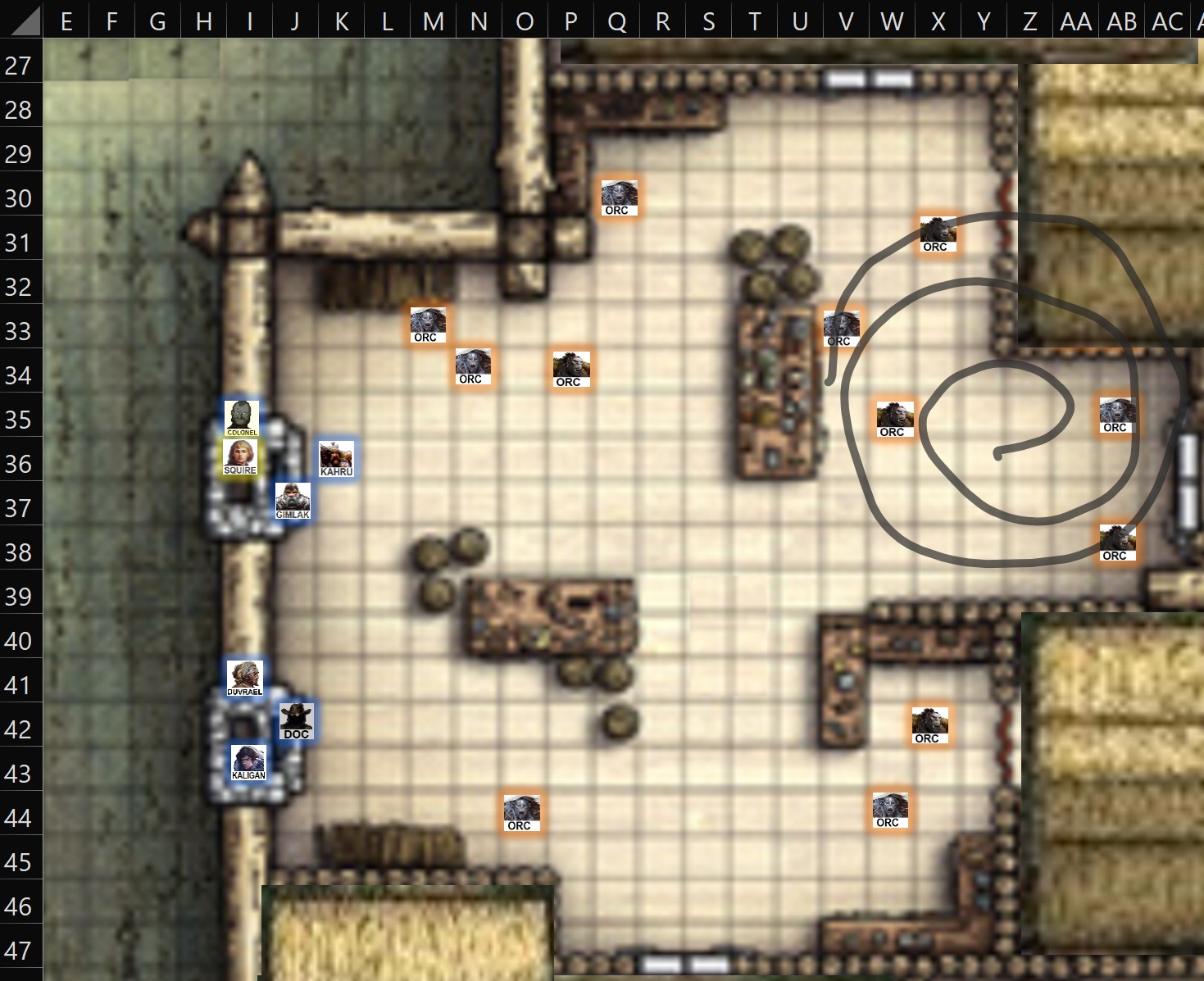 Kaligan draws his longsword and moves swiftly and surely to just beneath the nearest orc, cutting it down as he passes by. "I will hold the doors to the south." he says. "Let none escape."

Long, long years of studying magic are no help in building muscles. Sure, some of those spellbooks and tomes seem to weigh more than than the libraries they're in, but never did Duvrael have to carry such a monster for more than a few steps.

So different from holding himself up by a rope, dangling over a warm stove in a giant's fortress. The wizard feels the rope slip from his grasp, holding on just a little longer before realizing he cannot delay his inevitable fall any longer.

With a crash Duvrael falls amidst the cauldrons and pottery, alerting the orcs that people are coming down from both chimneys.

He loudly curses ropes, chimneys and giants in colourful Primordial words and phrases, then gets up and brushes the soot off his clothes.

Orcs. The kitchen staff are orcs. Only hill giants and ogres would even consider orcs in their kitchen, let alone trust the creatures to prepare their food.

With a sigh, the yuan ti takes out the components for his invisibility spell again, this time casting it at himself. Where the wizard stood just a moment before, now only the snake Hisss is visible before it quickly slithers off.

Supporter
The Colonel is impressed with the silent departure of the group from the roof, even as he hears the muffled landing of his companions as they reach bottom.

And it goes poorly.

Doc watches his companion, Kaligan, move toward the closest orc with his blade drawn while he remains hidden. From this position, he can see another Orc just past where Kaligan is going.

He feels the anger of a thousand trapped souls rise within him, and as his eyes flare up, Doc trains his furious vengeance upon the orc and begins firing.

The Colonel had watched Donnell disappear down into darkness and he wondered if he could keep the lad alive through this ordeal. Halfway down the chimney, at its darkest point, his mind's eye wandered to his worst of days. Suddenly, it was like he was there again - fire and ash - soldiers as young as Donnell, dead and dying. He reached out to one, and let go of the rope. He came to himself as he slammed into an iron pot and tore his overcoat on an enormous hook.

Then Donnell was there, helping him out of the fireplace. The lad had strapped on a large shield and a skull-cap helmet. He looked competent and ready. Perhaps he would live after all.

Kaligan was moving to cover the south exit when Doc began firin' from the shadows of the fireplace. Across the kitchen, an orc lost his head - quite literally. To Kaligan, the strange metal device (was it a wand?) in Doc's hand made a dull thud noise, and the orc's head went like a dropped egg. Fortunately, he was too buisy to be shocked, as he cut down the nearest orc and moved to head the next one off, who had grabbed a large knife off a table, and was running toward him, for the door. The thud noise happened again, but this time the targeted orc only staggered from the blow. Kaligan was satisfied to see that the first effect wasn't universal, even if he and Doc were on the same side.

Two orcs chose to surrender to Kahru, at least for the moment, and they stepped back to the north wall next to a wood-pile. The third there ran, going around the corner to the north, where another orc was heading for the northern door. The doors were big, and even for an orc, it appeared to be some work to open them, but the orc managed it, revealing a dark dining room, probably a servant's mess.

Two orcs found their way free of Gimlak's inky blackness - one found himself cornered against the pantry wall, while the other joined the ones fleeing northward, though it showed signs of injury from multiple scratches. The others were lost in the darkness - one's cries were cut mercifully short.

There was a small (by giant standards) room in the kitchen's north-east corner. Its door was a simple hung animal skin, part of which was in the area of Gimlak's spell. Suddenly it was torn from it's hook and sucked into the inky darkness, with hungry chewing noises. The revealed room was dark, but held two giant-sized beds, with two giant-sized shadows rising quickly in a panicked frenzy.

Supporter
The colonel stands, his ego bruised more than anything else, and limps his way towards the nearest orc. "Come, Donnell. None escapes."

Kaligan stutter steps as he is thrown off by Doc's weapon and demeanor. Never has he been this unsettled by someone. However, Kaligan is who he is and has learned how to control himself and his emotions. He quickly refocuses and moves steadfastly to intercept the remaining orc and keep anyone from escaping to the south.